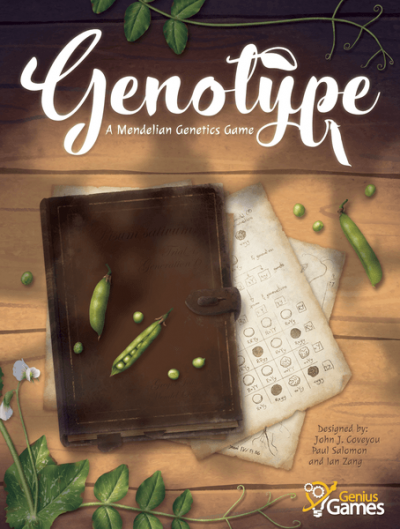 Step by step becoming the right hand man for Mendel

Players will take on the role of Mendel’s assistant, to assist him in his genetic research. All players will start with 3 Action Markers (AM), 3 research markers (RM) and 1 coin. Surprise? Just 1 coin. In addition, each player also has 1 Pea Plant card as a starter. These Pea Plant cards will have different genetic requirements. If the player collects enough genes matching with the card, they can validate and harvest it. This is basically a contract that the player has to fulfill. By completing the Pea Plant card, the player will get a certain number of points.

In general, there are 5 rounds in Genotype. In each round, players will go through three phases, respectively Working Phase, Plant Breeding phase, and Research upgrade phase. Each phase will focus on a different aspect of the research. At the start, players will use their AMs to perform a number of actions. In the Plant Breeding phase, players can collect Genes to validate their Pea Plant cards. To get the dice, the player must have enough slots in his playing area. Each player starts with only 3 positions for the dice. If the player cannot get more dice, the player must end the turn in this phase.

Finally, the final phase allows players to upgrade their engine, by spending upgrade money in 1 of 4 different areas (new locations to get more cards, new locations to get more die, hire more assistants, or get more AM). Unlike the previous phases, in this stage the last player in the turn will start first. And the turn will go in the opposite direction. One point to note is that every time a player upgrades a field, that field will cost 1 more coin for those who follow.

At the end of phase 3, the price to upgrade fields will decrease by 1 value. Players perform clean up, pass the right to the next player and start a new round. After the end of round 5, players will start tally points to find a winner. They will accumulate scores from completed Pea Plant cards. There are also additional points from the Phenotype research objectives. Finally, they can get points completed Traits on unfinished Pea Plant cards and unused coins. 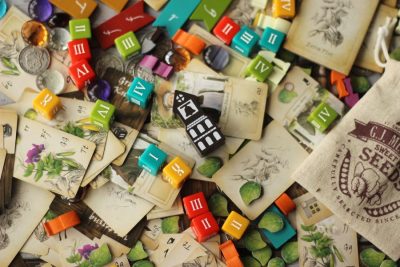 Impact from the game’s theme

To better understand the impact the theme has on game mechanics, let’s go back in history a bit. Mendel began his genetic work from 1856 to 1863. During that period he examined 28,000 different plants and he had to test many different properties of the plants. This is not an easy study, requiring many stages (seeding, care, characterization, harvesting and repetition), as well as many limitations to find the answer about heredity theory.

In Genotype, these things are very realistically rendered. Players start the game with a very poor engine – engine. 3 AM – aka labor, 1 money and 1 tree. Not to mention the game is very tight – cramped – in the way that players can buy more plants, or get more dice. In the early stages, players easily feel pressured because of the actions to do. Kind of like a domino effect – if something goes wrong, it can lead to a chain reaction, leading to unsuccessful subsequent actions. In my opinion, this is a very good investment point of the game. Thought the game was easy but it was harder than expected.

One point I find very interesting is the randomness in the game. As in real life, it is difficult to know for sure which genes will appear in which beans, especially in the early stages of research. That’s nature! How can man control? However, “If there is will, then”, with such a degree of randomness, Mendel was still able to complete his work. He is not against nature, but on the contrary, he learns from it, and improves on it. 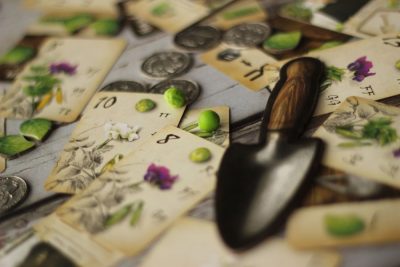 In Genotype, the game’s system is also built and developed in the same way. There is a presence of randomness, but that does not affect the player’s research too much. If the necessary dice are not rolled, the player can still use the modified dice (De Novo Mutations) to find their way out. In addition, there are still areas like the University, which help players complete the characteristics of the bean plant. Tactical thinking can be born here. If the player finds it too difficult to find the corresponding dice, they will draw new places of the dice, to use DeNovo Mutation (2 dice) to determine a random characteristic. The game provides a lot of options for players to find a solution, rather than against that randomness.

Emotions from the climax…

For most games that use dice (except for Tascini’s T-series), the climax is mostly in the roll of the dice. And genotype is no exception. If players can find get the required dice, then they can validate the traits on their cards. However, there is a small twist. Players can completely change the Gene banner in stage one, causing some genes to never appear during the roll of the dice. This is Genotype’s main Selling Point.

With such a mechanism, the game allows players to hinder, or slow down, the research process of other players. Push the other player to use their AMs to the University square to meet the gene requirements on the pea card.

Another climax is at the point of competing for positions to use AM in the game. Although there are many actions, not all actions can be performed by the player. There is a limited number of actions the AM can stand in. There are also some actions that players have to pay, especially if the player is a latecomer. This point may be another selling point in the game, but it is typical of the worker placement game series – indirect interaction between Action Spots. The Worker Placement mechanism usually works with FCFS (first come first serve) rules. Whoever comes first gets the benefit first, whoever comes last gets the hang of it. So for me, this is not really a selling point of the game. This element is smoother in other games (like Teotihuacan, or Lorenzo Il Magnigico…) 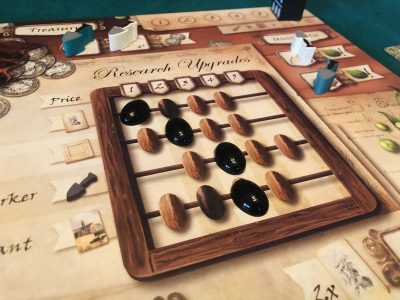 … to a quiet engine

Genotype is not simply a game that players have to meet the conditions from the contracts (the ones that are required on the Pea Plant Card) but it is actually an engine building game. Not coincidentally, the designers from Genius Games spend a whole phase in each turn so that players can spend money to upgrade their equipment and tools. Or to put it more simply, upgrade their system.

However, the engine in Genotype is a slightly different one. It’s not as massive as in Terraforming Mars. It’s not as obvious as it is in Splendor, or even Catan. It also doesn’t expand like it does in Monopoly. It’s very slow!

Aside from the dice rolling and the indirect interactions on the Action Spot, most of the time in Genotype, there are very few direct interactions between players. As mentioned above, players can still block each other by changing the banner of genes, but is that necessary? In a game where the engine system was slow and not massive, finding a way to intercept other players was a luxury. (unless the player is going the King Maker way then that’s another story) The block punishment in this game is not heavy enough, not worth the player to spend 1 AM to invest. This makes players focus on solving puzzles, their puzzles, in the cheapest and most economical way. If those actions accidentally block someone else, that’s fantastic, if not, that’s okay too. 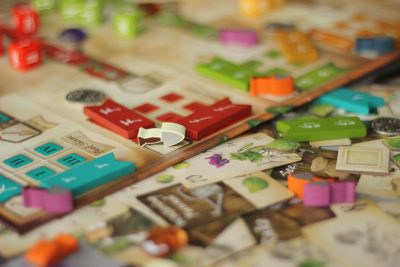 Genotype reminds me of myself in Biology classes. 2 days a week, but I still find the engine for Biology was too slow. It’s not as good and fast as other subjects. It feels like it’s not until the end of the term that everything starts to make sense.

So is this game. Genotype requires players to be really patient in the research process, to find the most optimal solution for their work. It is one of those games of the genre where players play with the game (play the game) rather than play with other players (play the player).

On the other hand, Genotype fulfills the mission set by Genius Games. The games are creative, and bring science close to gamers, especially children. The game is not too difficult, the rules are simple enough for players to understand all about what to do in a turn. Compared to other creatures like Periodic, or Cytosisc, Genotype is a huge step forward, from the appearance of more climaxes in the game, to the calculations that the player has to do throughout the game. It is a recommended if you are a fan on STEM. 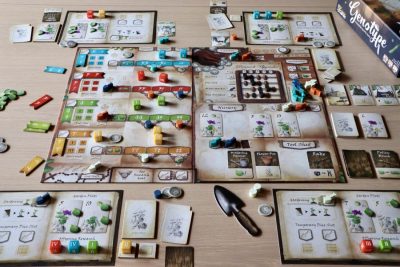 You can buy Genotype on Amazon below.