This is Amazon’s first game in the android market. I have read the reviews of others, and they all say how awesome it is, and how ingenious the game is. I don’t see the same things they are I guess,

For me, a game has but a few minutes to say yea or nay. Air patriots said nay. And I quickly felt as if I was playing a game meant for my 1 year old granddaughter.

Now, I will admit that I only played about 3 rounds. But, in those 3 rounds, I say was game that gave me no options other than to change the flight path of an airplane. And from what I can see, the only thing the airplane does is to shoot at, on it’s own, objects on the ground as it passes by.

As you destroy more tanks and things, you can drop bombs and gain more aircraft. Sounds like fun to me except that the game runs so slow, and I saw no point in it myself. I did not see a story line myself. Without a back story or at least instructions, a game has no start, and sometimes no point. 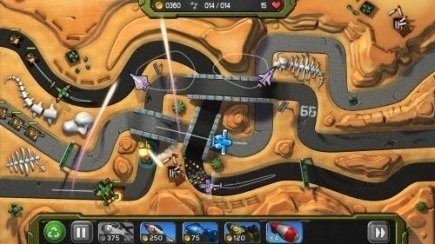 I am sure that there are many who would disagree with me on my review of this game, and please feel free to voice your opinions as well, after all the purpose of these reviews isn’t just to praise or condemn a product, but to make you aware of it’s existence, and give you some incentive to think upon them and maybe give them a try. So download the game, give it a shot, and let me know what you think.