I like many of you have MP3 music on my computer. Some of it is downloaded from online video sites and the rest, I have no clue. Some of the songs, the titles were not correct, and I know that various bits of information was missing when it comes to knowing all of the facts. So using a program to fix this deficit would be nice.

NeatMp3 is yet another software program to claim to be able to fix the missing information that some people feel that they need. I for one just care if the title is correct, and even then, I don’t listen to too much mp3 music to begin with. 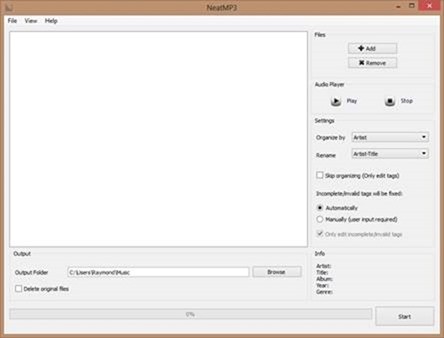 So I downloaded and installed the software, and it looked very promising. It is easy to use, and simple to figure out. Some programs seem to be needlessly complex, and others are elegant in their design. NeatMP3 falls among the elegant ones.

When I selected the location of my music, and ran the software like I was directed to do. I got back really no changes in the information for my music files, or at least not changes I liked. When I allowed the configuration to automatically change my MP3 File tags, Genres were wrong or missing, release dates set to 00, titles missing or incomplete, Artist names not found. The list goes on. In fact, some information that was there, and I knew was correct was removed by NeatMP3 entirely.

When the company was contacted the mentioned that you can set to not auto update and replace information and you can edit and change tags manually, but if you have to manually update the tags on all of your MP3 files in the first place than the software itself is of little benefit in my opinion.

Maybe you will have better results than I did, after all I don’t always listen to stuff from this century, but one would think that the information would be as easy to obtain, for a computer, as the songs were in the first place. Maybe I expected too much from a free program, and maybe I don’t have a clue what I am doing, hard to say. I just know that for me, I am not happy. The program did not live up to the expectations of their programmers claims. I give this software a 1 and do not recommend it .