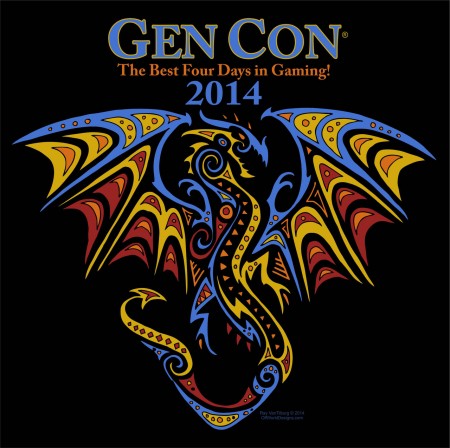 That event is Gen Con which takes places towards the end of summer in downtown Indianapolis, Indiana. This year’s Gen Con was the biggest Gen Con ever. Breaking 2013’s record with over 51,000+ in attendance young and old for what is known as “The Best Four Days in Gaming”, but you see the thing about Gen Con is that most, if not all people seem to associate Gen Con with Dungeons and Dragons which is where the convention first originated back in 1968 when Gary Gygax, the co-creator of Dungeons and Dragons, decided that he would like to create an event where people can gather together and play D&D and it all started in Gary’s home in Lake Geneva, Wisconsin which is how Gen Con got it’s name as a play on words of the “Geneva Conventions”

Fast forward 46 years to 2014 where Gen Con is now the biggest convention for tabletop RPG’s in the entire United States. Sure, Gen Con is known mostly as the place for gamers to come from all over and play massive amounts of other Dungeons and Dragons players, however what most people don’t know is that there is so much more to Gen Con than just playing D&D.

Gen Con hosts many other games such as Magic: The Gathering a game which made it’s debut at Gen Con, also other games such as the ever so popular Catan, but the great thing is that Gen Con also has video games for people to play as well. eBash Video Game Centers, a local video gaming type internet cafe in Indianapolis, set up shop at this year’s Gen Con which allowed people to purchase tickets and play many games such as League of Legends as well as giving players the chance to watch live streams of League of Legends tournaments going on all over the worlds on Twitch.

Another thing that makes Gen Con great is the people. You never know exactly who you’re going to talk to or what you are going to see. Thousands of people cosplay year after year at Gen Con which is another reason why I love to attend as because I love seeing people put all their time and hard work into creating some pretty extraordinary costumes some of which can take several hours, days or even months to create. There is even a costume contest as well as a costume parade right before the contest where cosplayers line up and march all around the walkways of the convention center.

So if you’re needing a reason to attend Gen Con and think that the only thing to do is play D&D I really invite you to come and check it out next year even if it’s for a day. I promise you it is something that every geek or nerd must experience because it will be an experience you will never, ever forget.