Recently I had to change my router because I switched from a ADSL connection to a WAN connection which requires PPTP protocol, that wasn’t supported by my previous D-Link router. So I went to the market and brought a TP-LINK TL-WR740N router which has it and just before getting my network up and running again, I thought of doing a reviews, and so here it is.

Quick look at the box:

As with any other router you buy it comes packed in a box and wrapped with plastic. The front of the box shows a little bit about the router and the company. It includes the model no. at the below-right hand side of the box, then just above it there is a sticker saying the company is World’s No.1 WLAN product provider (ummm, not sure about this statement). And on the left side it shows the data transfer as 150Mbps. 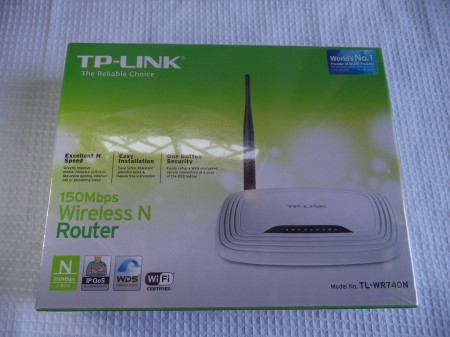 On the back of the box, we have a detailed comparison table of products from TP-Link’s TL-WR line up. We can see our router highlighted in the second column of the table. Above the table there are some written benefits and features about the product like data transfer rate, IEEE 802.11n/b/g compatible, firewalls etc. 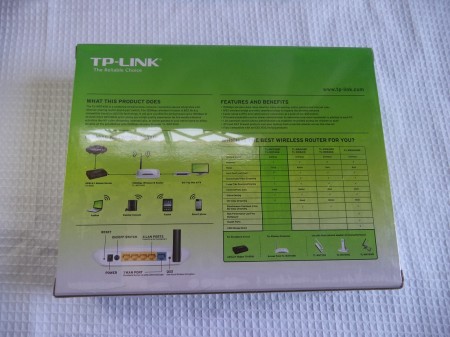 As soon as you remove the top box, you can see all the contents messed up inside in the container. 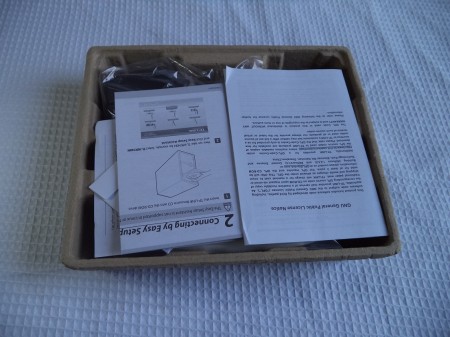 After removing the manuals and driver CD, you can have a better look at the router itself and its adapter. They were the only two thing in place to be honest. 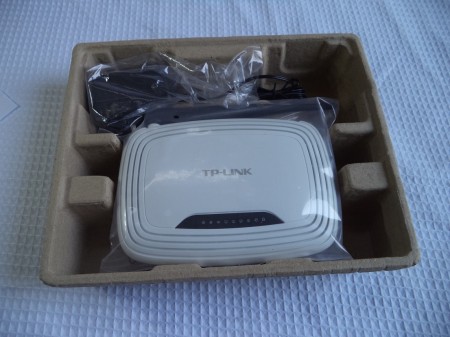 Nothing of important, just showing the container of the contents, I don’t know what the material is called, but damn it’s solid, very useful and trustworthy for shipping worldwide. Anyone remember egg’s being shipped in such material packages? 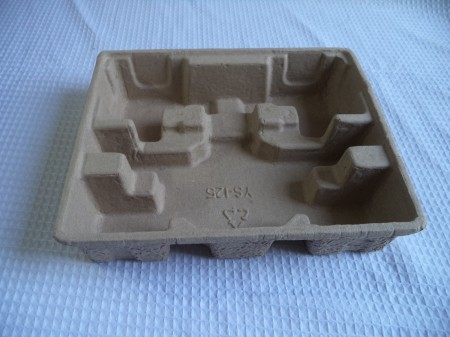 The router comes with all the stuff you’ll need to get your network up and running, like the manuals, power adapter, data cable and the drivers CD. The Data cable is a Cat.5 wire and is about 4ft or 1.2m long, long enough if you set up your router right next to your PC. 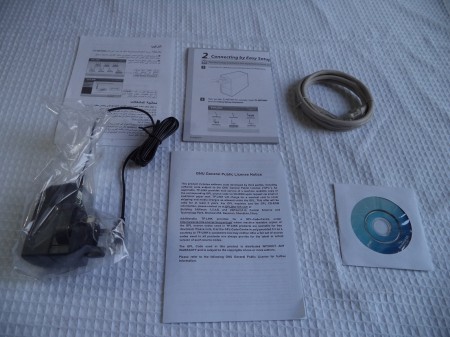 On the top we have the LED indicator which shows the status of router and connected PCs and right above them is the TP-Link Logo. The top isn’t shiny or a finger-print magnet and has some cutting design. The design isn’t something real fancy to me the color seems a bit dull like the product might have been in use. Or in other words the color isn’t pure white but like a dull cream or off-white. 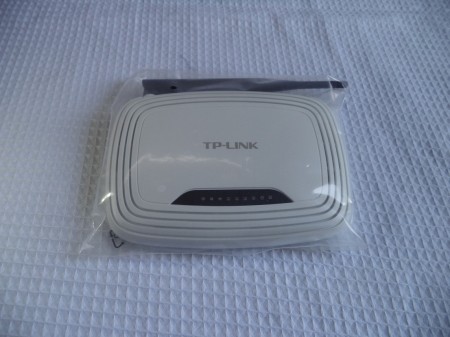 While on the back, we have a warning sticker that kind of forces you to read the Quick installation guide before setting up the router or you’ll be tased with electric waves emitting from the router, kidding. After removing the warning sticker, you’ll be able to see another sticker on the router which details the default access route, Username and Password, MAC address and model no. 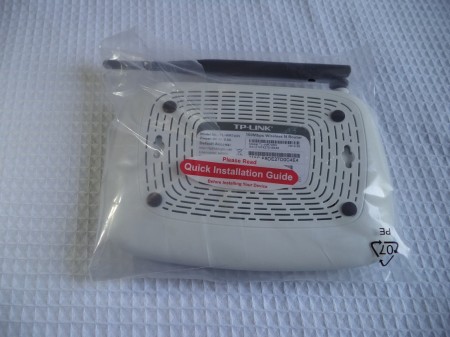 The router only has one 5dBi Fixed Omni Directional antenna.  Also the Antenna is not detachable/removable which means you’re stuck with it forever! 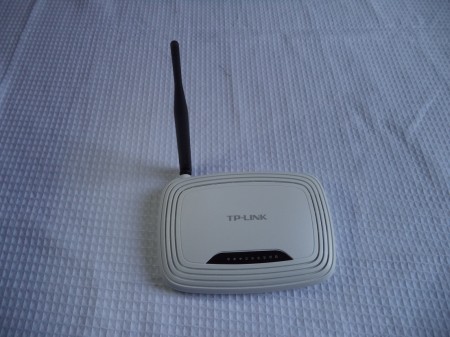 At the back where your WAN cable and LAN cable would be plugged, we have 4x 10/10Mbps LAN port and 1x 10/100Mbps WAN port. We also have a reset socket, the power button and a QSS button. 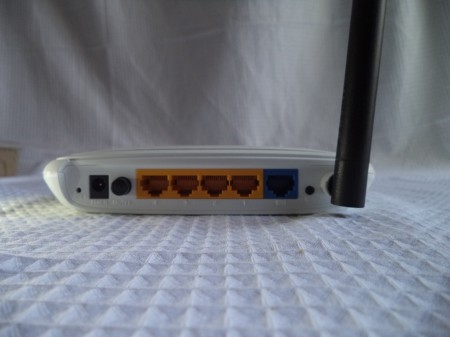 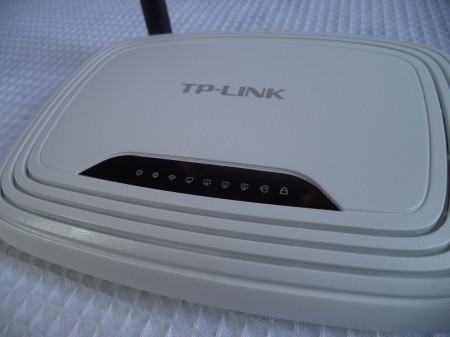 To access the TP-LINK TL-WR740N router, you’ll have to connect your PC with the router via LAN cable or via WiFi and input the following address in your browser: 192.168.0.1

Different models and routers may have different access routes/point/default gateway like 192.168.0.15 or 192.168.1.1 etc. As soon as you press enter a popup would emerge and ask you to login. Default username and password in most of the cases would be admin and admin respectively. Though I would recommended you changing them later to something else. 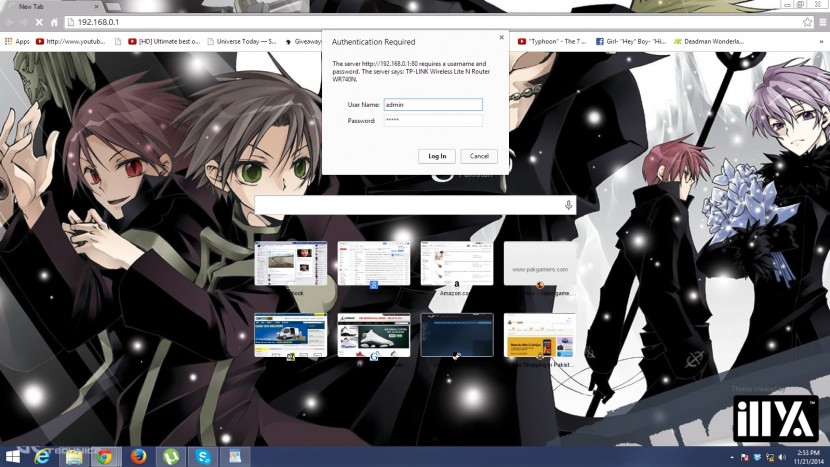 On the front page you have the status of your router like IP Addresses, Subnet Mask, SSID, Mac Address etc. I would recommend you going through the Quick Setup to easily set up your network, but since PPTP connection occur in rare cases, I would like to set it up manually. 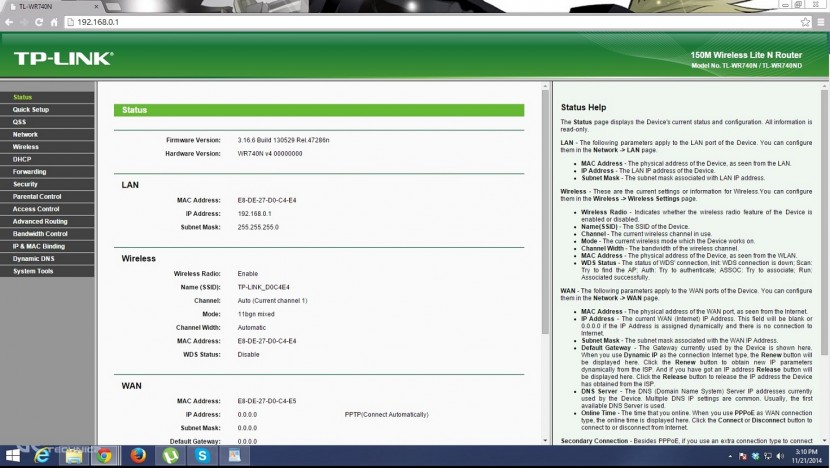 Once you’ve configured your router according to your ISP, you might want ot change the name of your device also called SSID. To change how your router shows up in the WiFi List, go to Wireless > Wireless Setting. 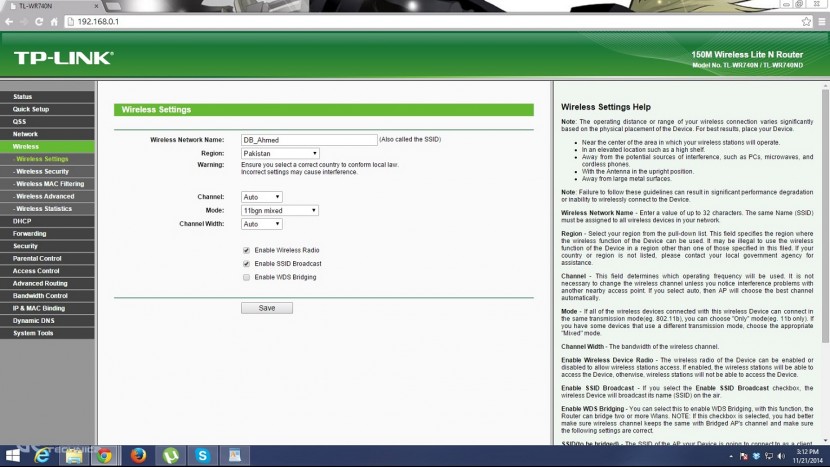 To change the password for your wireless connection, go to Wireless>Wireless Security. It’s up to you, which kind of protection/encryption method you select, but since WPA/WPA2 is recommend, I’ll go with that. 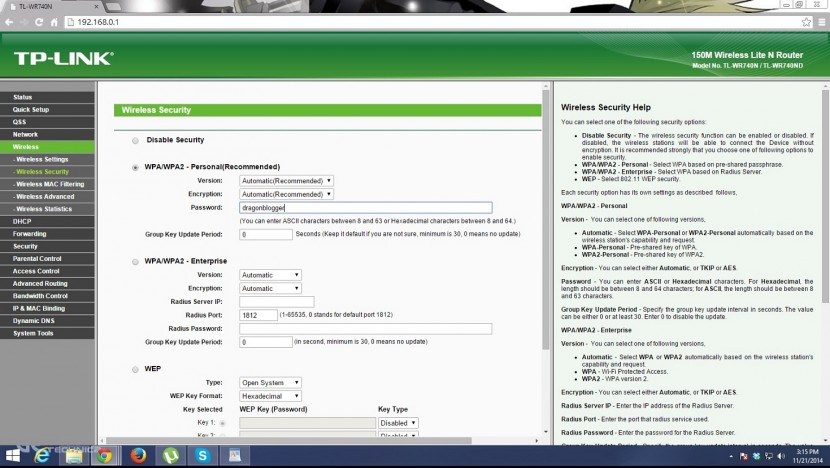 Make sure to save all the settings and don’t forget to reboot the device after first installation, or otherwise, some of the changes will not take effect. To reboot, go to System Tools> Reboot or do it from the back of the router. 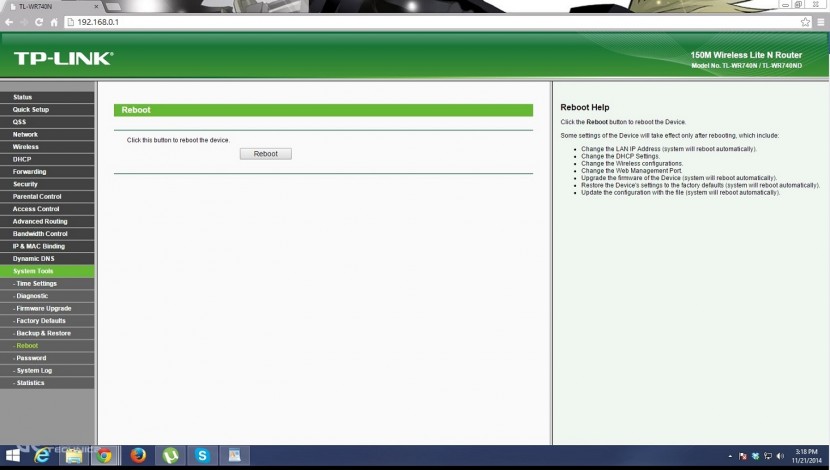 My testing methodology is pretty simple, I’ll first test my connection directly by plugging the WAN cable into my system, and test it on www.speedtest.com then I’ll test the router connection to PC via LAN wire and see if there’s any difference. Then I’ll test the WiFi quality at different distances on a mobile device.

This is the result when the WAN is directly connected to my PC:

This is the result when the WAN is connected to the router, and I have a line coming through router to PC:

We can see a little increase on the upload speed and the ping as well, acceptable!

This is the 1st WiFi test, when I’m sitting right next to the router on PC chair: 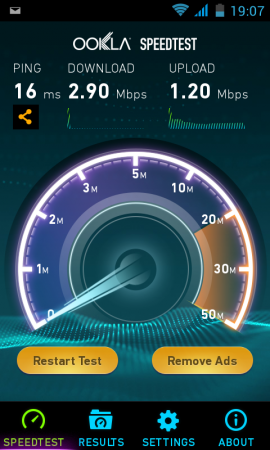 This is the 2nd WiFi test, when I’m standing about 5 meter away from the router with a brick wall in between. 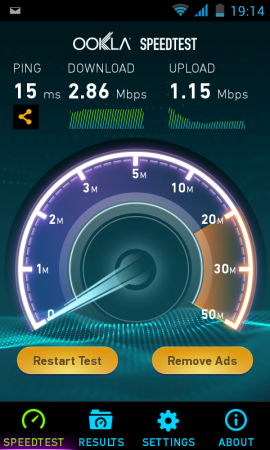 Signals that far are good enough and nothing much on pings, though we can see the transfer rate has started to decrease.

This is the 3rd WiFi test, when I’m standing about 10 meters away from the router with two brick walls in between. 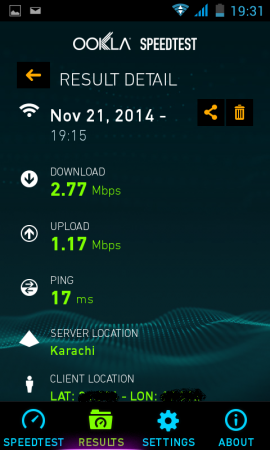 Misplaced the screenshots, though had them in test history. Signal at that distance seems to be perfect enough, considering people usually stay in the same room where the router is for better coverage, human logic.

In the 4th WiFi test, I went outside about 2 houses away or almost 15 meters away from the router’s position, including about 4-5 walls in between and it was on the second floor by the way. 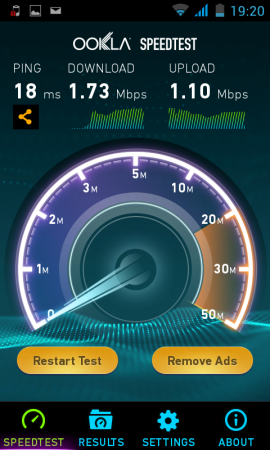 I could have went even further but I don’t suppose anyone would want to put their computer/laptop that far from the router and also I didn’t want my neighbors thinking the geek is out again doing annoying experiments. We can see the signals have dropped and a major drop in download speed.

Starting from the packaging of TP-LINK TL-WR740N, they make sure you get the content safe and sound though that doesn’t include the placement of the contents. Secondly somehow I’m not satisfied with the build quality of the router, or rather I should say with the finish it has. The white color looks really dull on it, like the router may have been in use for ages and have dust over it, which isn’t the case here.

On the other hand, talking about the performance, as you can see it does great. Through this router I get better and stable downloading/uploading speeds, the jerks in the speed have almost gone away. Talking about the wireless connectivity, It’s way better then the VL-Link router my friend had lent me to use while I buy a new one. I can notice the improvement in the streaming and downloading on wireless devices as well. Considering the local price which was around $14 with 1 year warranty, I would give it a 5 star only if the build quality was more satisfying, though some might disagree with it cause the looks doesn’t really matter for some. Overall, I’m pretty much satisfied with the product, haven’t seen any ups and downs with the router so far.