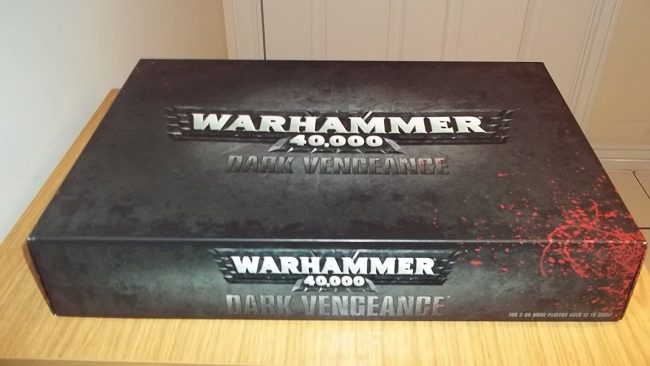 In this article I will be showcasing Warhammer 40k’s Dark Vengeance Starter Kit. This is a kit that contains everything you need to start playing games of Warhammer 40k. This game has been around for almost 30 years and, after all this time, they still know how to deliver a great looking box of miniatures! They never fail when it comes to details and Dark Vengeance is no exception. If you love assembling these little guys and then doing a little role playing afterwards then I have a treat for you. 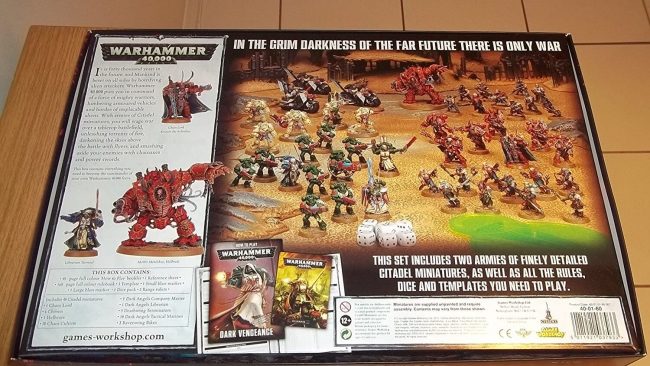 It contains 49 snap-fit plastic miniatures that make up two different forces. You have the Dark Angels and their foes the Chaos Space Marines of the Crimson Slaughter. It also contains a small-format paperback edition of the Warhammer 40k rulebook. It also contains a complete assembly guide, because there is quite a bit of assembly required. Some would probably argue that the assembly is the best part. It comes with a quick-play reference guide, a datasheet for the Chaos Space Marine Aspiring Champion and an army roster sheet. The kit also contains dice, templates, and a how-to-play booklet that includes six different scenarios that you can play out on whatever tabletop you might have. 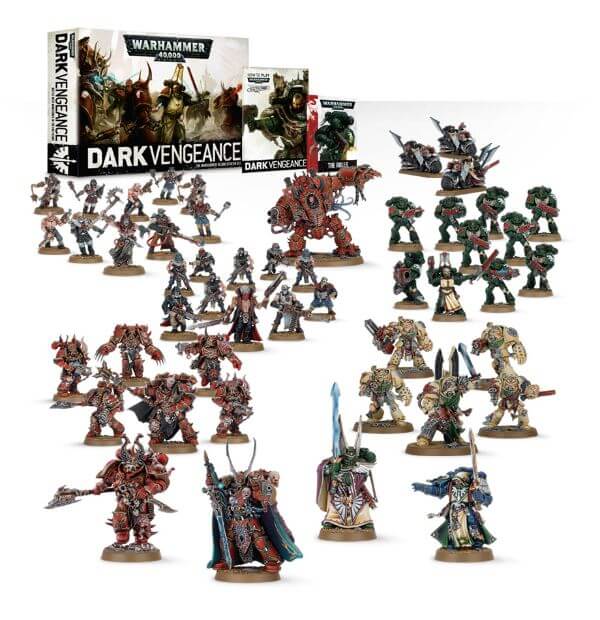 The Dark Angel force comes with quite a few awesome figures, including the Company Master armed with bolt pistol, power sword and combi-weapon, a Librarian who has a bolt pistol and force sword, a ten-man Tact Squad, a five-man Deathwing Terminator Squad and a three-man Ravenwing Bike Squadron. The Crimson Slaughter also come with some pretty awesome figures. The Chaos Space Marine force includes a Chaos Lord who is armed with a power sword and plasma pistol, a Helbrute, armed with multi-melta gun and power fist, an Aspiring Champion and six Chosen figures. They stand alongside twenty Chaos Cultists who can have a combination of ranged weapons such as autoguns and close-combat weapons.

All-in-all, the Warhammer 40k Dark Vengeance kit is definitely a great addition to any collection. If you’re new to the game, they made it easy for you to hop right in with this kit. With all the extras and the how-to-play booklet, you’ll be on your way to battle in no time. Just remember, if you plan on picking this up, I would highly suggest you also pick up some paints for it. They don’t have paints that come with it but the beauty of that is you can make them look however you want!

Disclaimer: Images were taken from Amazon.com and Games-Workshop.com