I receive new fit bands to test all the time and this was the first time a brand sent me the ID105 model which also supports the Veryfit 2 app just like the ID107 fitness band.  Fit bands are not smart watches, they don’t have an OS and you don’t install apps on them, so they have one specific function only and that is to monitor your fitness by tying into your phone fitness tracking application.  In this case this is the Veryfit 2.0 app or Veryfit with Heart Rate Monitor which are two different app names with the exact same look and feel in the iTunes App store, though some say one works and some say the other works. 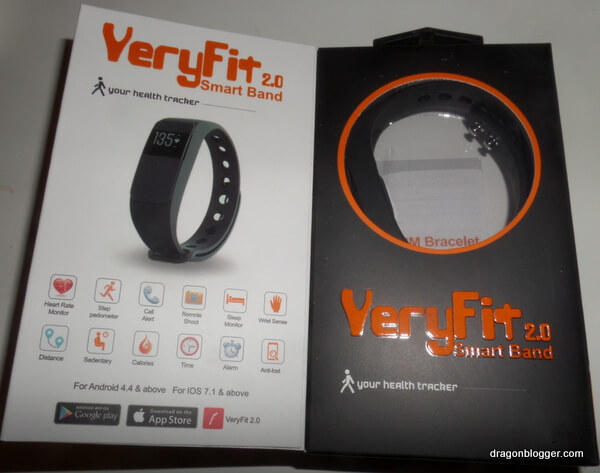 007Plus is the store on Amazon that sent us the watch to review and I reviewed and compared this watch to the ID107 VeryFit 2 fit band and the Xiaomi MiBand 2 fit band to show you how it stacks up and whether or not I think the ID105 is a good deal and worth your time and money.

After you open the box you then charge the watch, power it on by pressing the side button and download/install the VeryFit 2 or VeryFit for Heart Rate apps on your iPhone or Android phone. 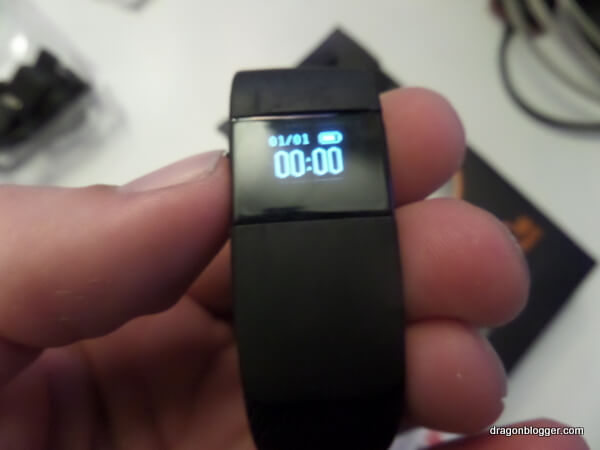 This watch requires you to have it paired with your phone, it cannot set time by itself without having a phone to pair it with.  It will increment time if pairing is lost, but it can’t set the time manually at all.  On the back side of the 007Plus ID105 Fit Band with Heart Rate Monitor you will see that it has the heart rate sensor and 3 pins. 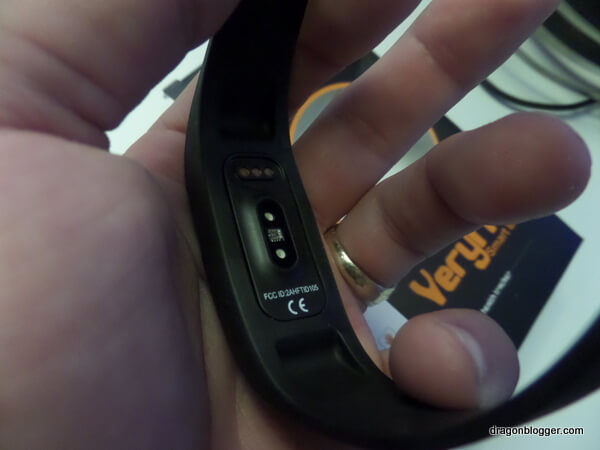 These 3 pins are where you use the USB cable battery charging connect which is a short USB cable with a 3 prong clamp that you clamp over the watch to charge it.  So you take the whole wrist strap off to charge the watch, unlike the ID107 or Xiaomi Mi Band 2 you don’t take the gadget part of the watch out of the wrist strap. 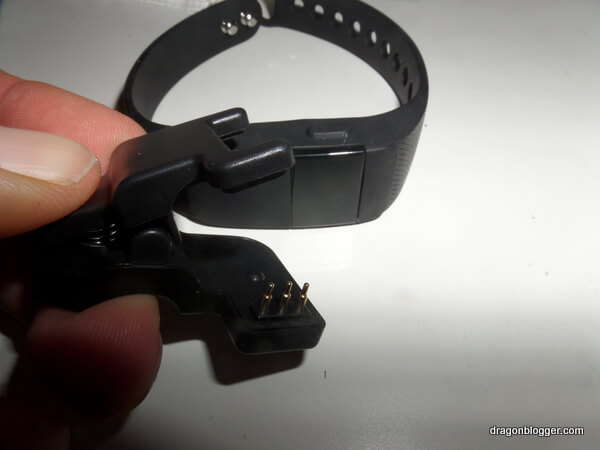 You can see that you have to line up the pins in the clamp perfectly with the 3 connectors on the back of the watch, and it is easy to accidentally not have the pins lined up thinking your watch is charging when it isn’t. 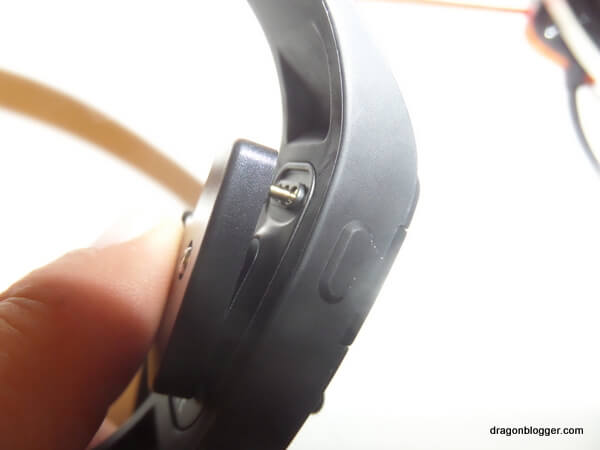 This is why you should always look at the front of the fit band after clamping it to charge, make sure you see the battery charging symbol which indicates you have it clamped properly.  The watch screen will shot off in a few seconds which is normal but it is still charging. 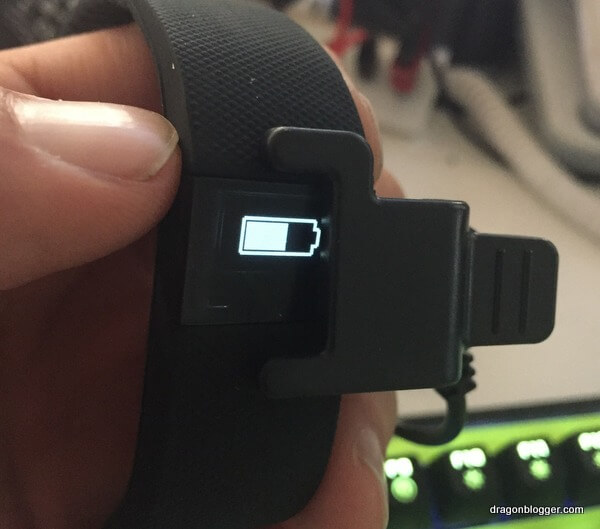 Battery life was about 4 days between charges, which is around the same as the ID107 but the Xiaomi Mi Band 2 has a 9 day battery life, though it doesn’t do active heart rate monitoring and only monitors when you specifically request a heart rate check.  You can see below the ID105 from 007Plus is on the right, the watch home screen compared to the Xiaomi Mi Band 2 which only displays the time on home screen.  The ID105 displays the time, AM/PM, date, day of the week, battery life and whether or not it is connected via Bluetooth.  You get a lot more on the home screen which makes the fit band more valuable. 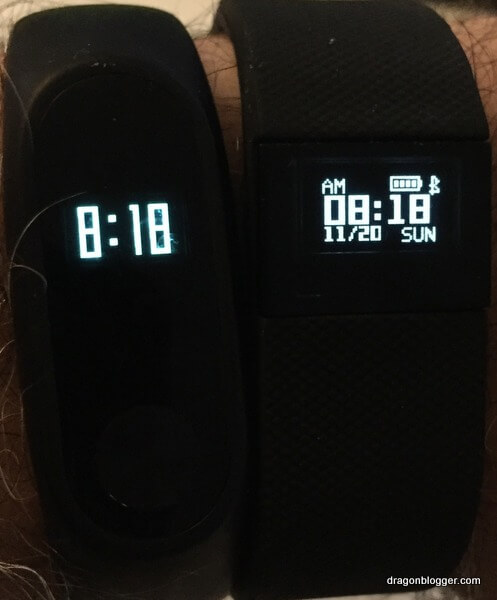 Inside the VeryFit 2 app which I reviewed previously you get to set your silent alarm options, and choose which notifications and alerts show up on your watch.  You can also use the watch as your snap button for pictures, but I found a bug where once you snap pictures you can’t get back to the VeryFit app without closing and re-opening it. 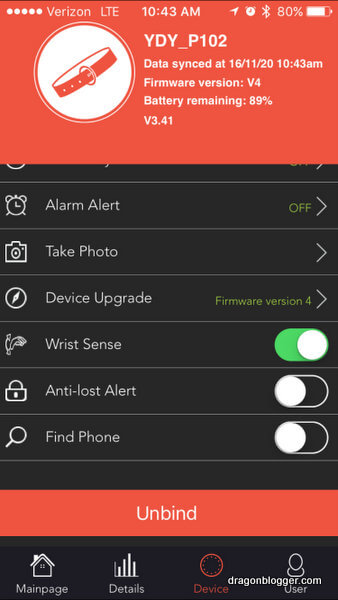 Step tracking is pretty accurate from what I can tell, it uses GPS as well as motion so it will not track steps just by waving your arms or hands like some fit bands, it won’t increment steps by driving either from my testing.  It kept up with the Xiaomi Mi Band 2 and the step tracking was fairly current, the only minor issue that is that I set my daily goal to 8,000 steps and one night when I reached my goal, it would buzz the watch, then it would subtract some steps when I lying in bed and then made it reach the goal again when I walked into the kitchen.  This only happened 1x and I was not able to reproduce why it subtracted and re-added steps but I couldn’t reproduce the issue again. 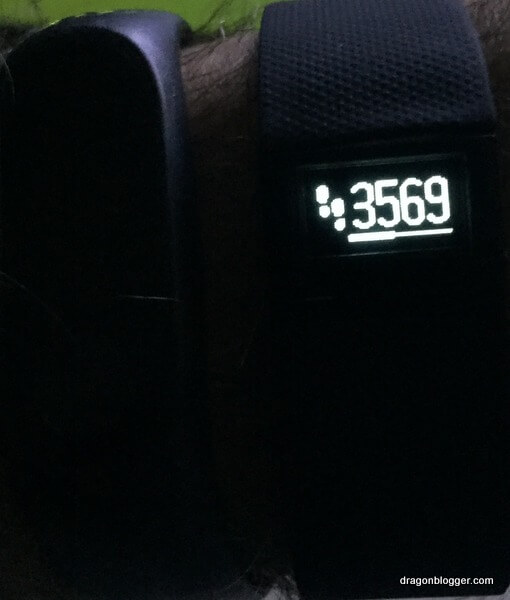 Probably one of the coolest features of this fit band which not very many other fit bands have is that it will show you the caller ID of the person who texted you, and it scrolls across the fit band really quick when you get a phone call or text and you have the appropriate alert enabled in your VeryFit 2 app.

Demo of the 007Plus ID105 SMS Notification

The wrist strap itself didn’t seem to cause any skin issues and I wore it tight for several weeks, so I have heard some wrist straps cause skin irritation for some people but I haven’t experienced any issues.  The double snap point makes it less likely the watch will get unstapped and fall off compared to single snap fit bands and it was a little bit of a struggle to snap it one handed until doing it a few times and it loosed up a bit.

The ID105 Fit Band from 007Plus does a great job of giving you more information on the single home screen than the ID107 or the Xiaomi MiBand 2 and it seems to do at least a good a job at tracking heart rate as these other fit bands.  It does have the constant monitor mode which the Xiaomi MiBand 2 does not.  The ID105 suffers from the same issue as the ID107 with the VeryFit 2.0 app for iTunes, it does not track and show sleep.  The watch does however and in Android with Google Play the sleep data does track, it is the VeryFit 2.0 app for iTunes that is likely broken and not syncing the sleep data but even with leaving feedback in iTunes app store the company that makes the VeryFit 2.0 app doesn’t respond or seem to fix the issue with Sleep Sync on iPhones.  The watch does have only about a 4-5 day battery life which puts it in line with the ID107 though nowhere near the 9 day lifespan of the Xiaomi Mi Band 2.  The clamp which charges the watch is in some ways better than popping the watch out of the wrist strap which can weaken and break the band, but it is easy to accidentally clamp it wrong to miss the 3 pins so that part isn’t as convenient.  It would have been nice if you could have simply slid or rest the watch on a charging stand without having to line up the 3 pins perfectly.  Overall though dollar for dollar the ID105 gets a higher recommendation than the ID107 and the Xiaomi Mi Band due to having your battery life indicator and calendar date on the homescreen.  It also is able to display the name of the person who texts or calls you and it scrolls across the watch, this is something not supported in the other 2 watches so that makes the ID105 a solid 4.5 star for the price and features you get as a fitness watch. You also get 2 color options, purple or black.

Update on the ID105 007Plus Fitness Band

So after about 5 weeks of using the fitband I can tell you problems arose with it, the battery which used to last 4 days is now only lasting about 24 hours.  This happened after I accidentally let my fitband drain to 0 battery and die completely, ever since I recharged it it just hasn’t held the same capacity since.  I talked with the brand and they mentioned that you should leave the watch on the charger no more than 2 hours, if you leave it on charger persistently or let it drain completely then it can drastically decrease battery life.  Given that you have to have so much attention to time to leave it on charger I am changing the star rating to 3.5 stars instead of 4.5 stars.  I think any product should have auto sensing and stop pulling a charge when it reaches 100% battery and not risk damaging the battery because you simply left it on the charger.