1ByOne sent me a 50 mile HDTV antenna. It was shipped, it arrived, and the delivery person put it on my neighbors porch, and they, while they could read my name on the box, stole it and ran off, leaving their place with much more valuable things behind. I was sad and frustrated and explained my issue to Amazon. 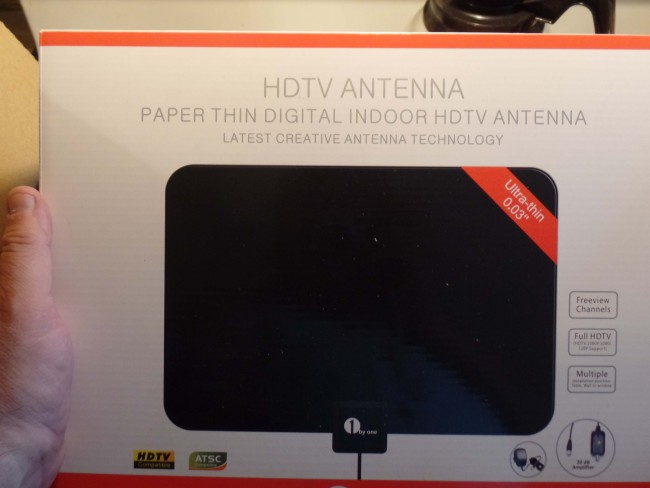 Amazon graciously sent me a second one at no charge, and it arrived in my hands this time without issue. I have to credit Amazon for such great service and this isn’t the first time I have had great service from Amazon.  I must say I was very excited also for this HDTV Antenna which had a range listed of 50 miles. I am hoping that this antenna will finally enable me to watch some local channels that I have been unable to access for years due to distance.

Installation was so easy, I did not do a video of any kind for the unboxing however. All I had to do was remove the plastic cover from the face and back of the antenna, and stick it to the window. Then the cable connected to a power source that helps modify the incoming signal, and next, to the TV. 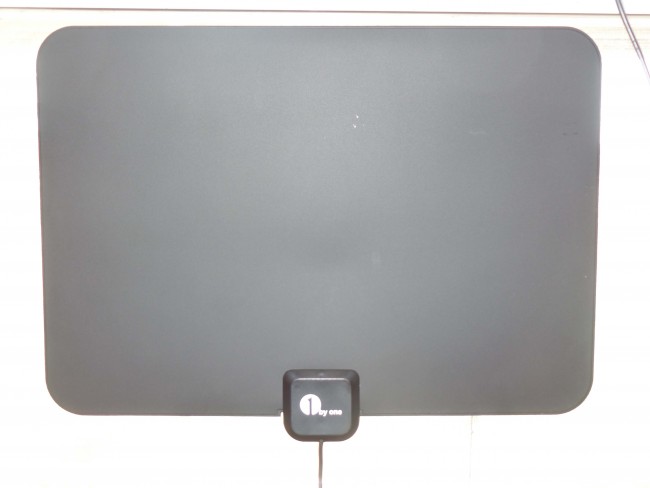 I followed my TV’s instructions for setting up and refreshing the channels I have and that is where things kind of did not change. I did get the station I normally cannot get to show up in the list, but nothing came in as a broadcast. I do not consider this to be a fault in the antenna, so much as a problem with the station. I can say that even before the government switched us to digital and HD, we had troubles with this station. What is odd is there is another station located a bit further out that we receive their broadcasts just fine. 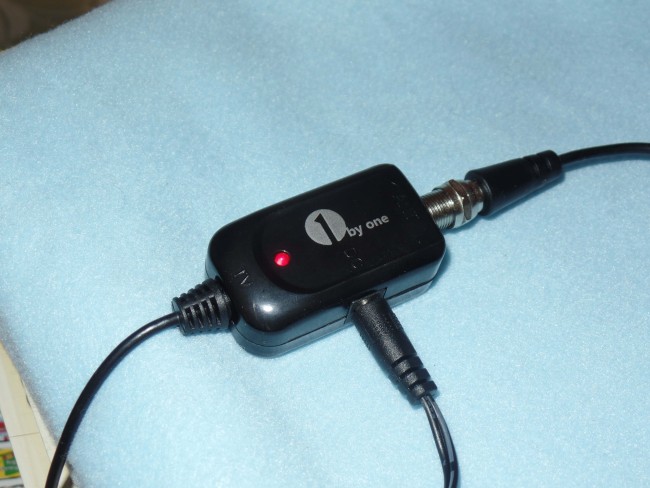 I did notice that for some reason I was not getting 3 channels that I normally did receive, and this antenna from 1ByOne picked them up without any troubles as well as a local analog station that was too weak for my other antennas to even see.

So, does this antenna perform as it advertises? I would say yes, and perhaps if I were a bit closer to the signal source, the 3 channels we do not receive would in fact come in better but even 50 miles range isn’t enough if you are really distant from the signal towers.

I placed the antenna in the window as we have metal siding, and metal can interfere with reception. Sadly I cannot change the siding as we live in a mobile home. So the choice of the window seemed the best spot, especially as it is also free of anything like trees or other structures. (I am not sure if those things interfere with broadcast stations). I did have one problem that is product related however.

I used the three enclosed double sided tape squares. Used to attach the antenna to the window. The squares are padded and thick and have the sticky tape on both sides. The tape stuck to the windows just fine, but after a few hours, they came un-attached to the plastic on the antenna. I tried to reattach and the same thing happened a second time. I ended up using gorilla tape and they have stayed in place since, so I would say the adhesive used to affix the antenna to windows isn’t strong enough.

Now to be fair, when first attached and tested we had a cold front moving in and the wind was up a bit so, a second testing is in order. It is always possible that the weather played a part in the signal problems. Even still, with the antenna from 1ByOne attached, the screen shut off several times and the signal caused square spots to appear on the screen, something I did not have happening before.

So, I re-scanned the channels, and everything showed up correctly this time. The stations that were not showing finally are. One might ask why I shared and kept in my review a failed attempt at viewing stations, I would say that as a child, I was told a saying, “If at first you don’t succeed, try, and try again”. In this case, it worked. Which also serves to remember to be mindful of things taking place outside the house, and not just assume a bad product as the weather is certainly a factor when using an antenna as well.

So, do I recommend this antenna from 1ByOne? Yes I do. Even had it not managed to allow me to see the 8 additional stations that I am now enjoying, it was easy to set up, and takes up much less space than my other antennas did. However, since it did pull in 8 additional stations, it means that this antenna is better than the ones I have previously owned and therefore it is worth the money all the way.