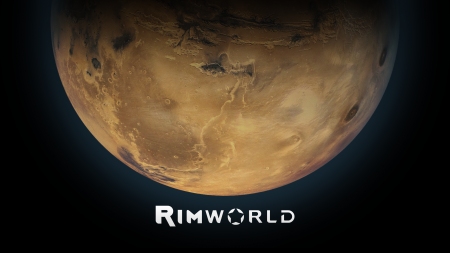 Rimworld, is a scifi colony management simulator from Ludeon Studios with more ambition than most modern indie games dare to have. Originally only a mysterious project known as Eclipse Colony, Rimworld emerged from the mind of Tynan Sylvester some time in early 2013. It seemed to get traction almost immediately. Borrowing the art style of the somewhat well known Prison Architect, the graphics don’t seek to blow you away. Everything looks smooth and well rendered, but with a simplicity that allows the game to focus more on game play than lens flares and glossy textures. This of course means that Ludeon has focused on the core game play mechanics very carefully.
Any given game will begin with you generating your own planet. This is done with a random seed and will generally be made with very little player control, although this has been discussed and players may eventually have a larger hand in world rendering. All planets will be inhabited by several types of people, all of whom will have varied opinions of their soon to be new neighbors. The player is then asked to select a location somewhere on the world. There are several distinct biomes with variable weather, temperature, elevation, rainfall, and other important factors that the player will have to take into account when planning the survival strategy of their citizens. After a site has been decided on, The player then chooses three colonists to begin their new life with. Each colonist has traits, appearances, backgrounds, and preferences which will shape what kind of contributions that colonist will be able to make to the colony. As of yet you can only hit the random button and hope to eventually get the kind of team you want assembled, but due to the extremely mod friendly nature of the game (there is actually a button you can use to manage your current mods and even a link to find them) and the incredibly dedicated fan base, mods are available to help you get exactly the kind of characters you want. I tend to stick with very militant citizens, but you could go with a team of farmers, scientists, or psychopathic cannibals to save yourself money on meat. Once your characters have been picked, your site will load and the game can truly begin. Colonists fending off some pirates

What little background you need is very simple. Your colonists’ ship has just been destroyed, and they are falling from it in drop pods with a few supplies to get them started. Put out the welcome mat because this site will be your new home forever (or at least until the game allows for travel). There isn’t an exact tutorial yet, but the game will give you basic hints for what you need to survive. Food, shelter, and basic defenses are the only three concerns that you will have initially, because all of your survivors will be high on “new colony hope”. The game play is based around the jobs you suggest, and the colonists opinions regarding how much of a priority each of the jobs are. Unlike many other civ management games, you can set each of the colonists individual priorities. During one play through I had a pretty great soldier who, after a low caliber bullet to the brain, wasn’t good for much more than sweeping the floors and stocking my food hopper. Depending on which narrator your chose during the beginning of your game, you will see different events happening to your colony. The more brutal settings will see your base attacked every day by pirates with far better equipment than you may have available. Lower settings will result in fewer attacks but more personal issues for your colony to deal with. Since the narrators can be changed mid game, many players seem to prefer peaceful setups, followed by brutal attacks later in the game. A colonist attempting a rescue during a forest fire

The most incredible part of the game however is the sheer number of things a player can decide their colony is for. Military bases, tribal cavemen, merchants, and with a few mods, even an intergalactic brewery are all well within the players reach, and every one of them feels rewarding. Or, if the player wants, put on the in game development mode and just play god for a while. Anything is possible. Anyone seeking a great world to escape to should consider vising Rimworld.