Back when I got my Eglide XL pro 2 Android Tablet, I was told it could use a USB Host Adapter. At the time, I did not know what one was so I went from store to store in my small west Texas town looking for one. With so many tablets, and electronics on the market I would have thought that this would have been something that everyone carried, but I was wrong.

With no luck locally, I searched online, and found one of the rare Ultra A-Female USB 2.0 to B-Male USB Mini at Tiger Direct. This adapter is just over an inch long, and is very lightweight, but it does a big job. What makes it better is the price. At only $2.99, they are practically giving it away and you pay more in shipping than for the price of the adapter.

When looking into getting the adaptor, I learned something very important about selecting the proper device. The term Micro or Mini can mean different things to different people. So, if you know what kind of small plug-in goes to your device, look at it. On one side of it, there is a pattern printed on it. Mine has a single straight line with one raised bump on it. On others, there are two. Sometimes it is easier to see the pattern in the pictures online, rather than being able to tell the actual size of the end piece.

So, I got it, plugged it in and the first thing I tried out was a Bluetooth adapter, since my tablet does not have built in Bluetooth. Bluetooth adaptors are either not supported, or the one I have is not compatible with android technology. 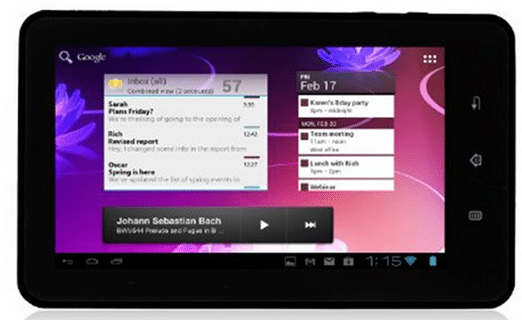 I then tested it with my mouse with the eGlide Pro II tablet, and that was awesome. The mouse pointer showed up on screen just fine. Now, some may ask, why use a mouse when you have the ability to touch the screen instead? Well, for one thing, fingers leave smudges, and it is difficult sometimes for some of us with fumble fingers to click on things properly.

I have tested the adapter with my one TB external HD and it recognized the drive just fine, I have also used it with a flash drive, keyboard, and had equal success. I tried using a USB camera. That did not do so well, one locked up the tablet and the other just nothing but turn on the light. I also tried to connect an Xbox 360 controller but nothing happened at all. I even hooked up a USB hub that has a light in it and I was able to connect more than one thing at a time.

While not everything I have hooked up using the USB Host Adapter has worked the way I wanted it to, it is only a matter of time until I figure it out. The biggest selling point is the ability to use external storage devices and of course, the Mouse and Keyboard that makes this adapter well worth the money.