Today on the test bench, we have something that’s unique and one of a kind. Today, we’re going to review the Apacer AS720 Dual interface SSD. And by the dual interface, I mean it has both a SATA and a USB connector. Yup, that’s right, you can use it as both an internal 2.5″ SSD or as a portable SSD. And to get the best performance out of it when it’s not in the system and to decrease the numbers of cable position switched you’ll make because you’re not looking at the port, it’s equipped with a USB Type-C port. How awesome is that?

So let’s get right into it with the unboxing video. 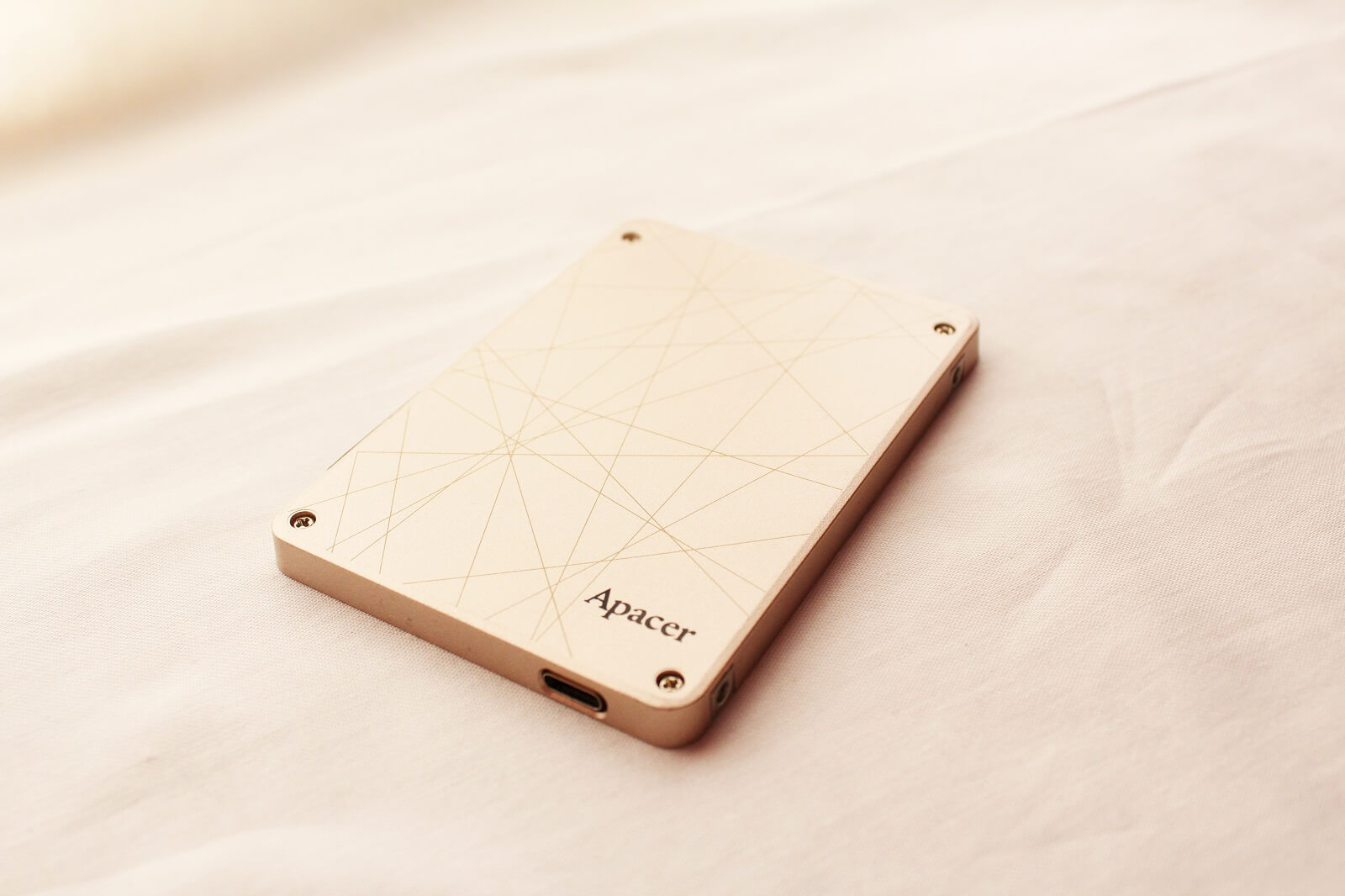 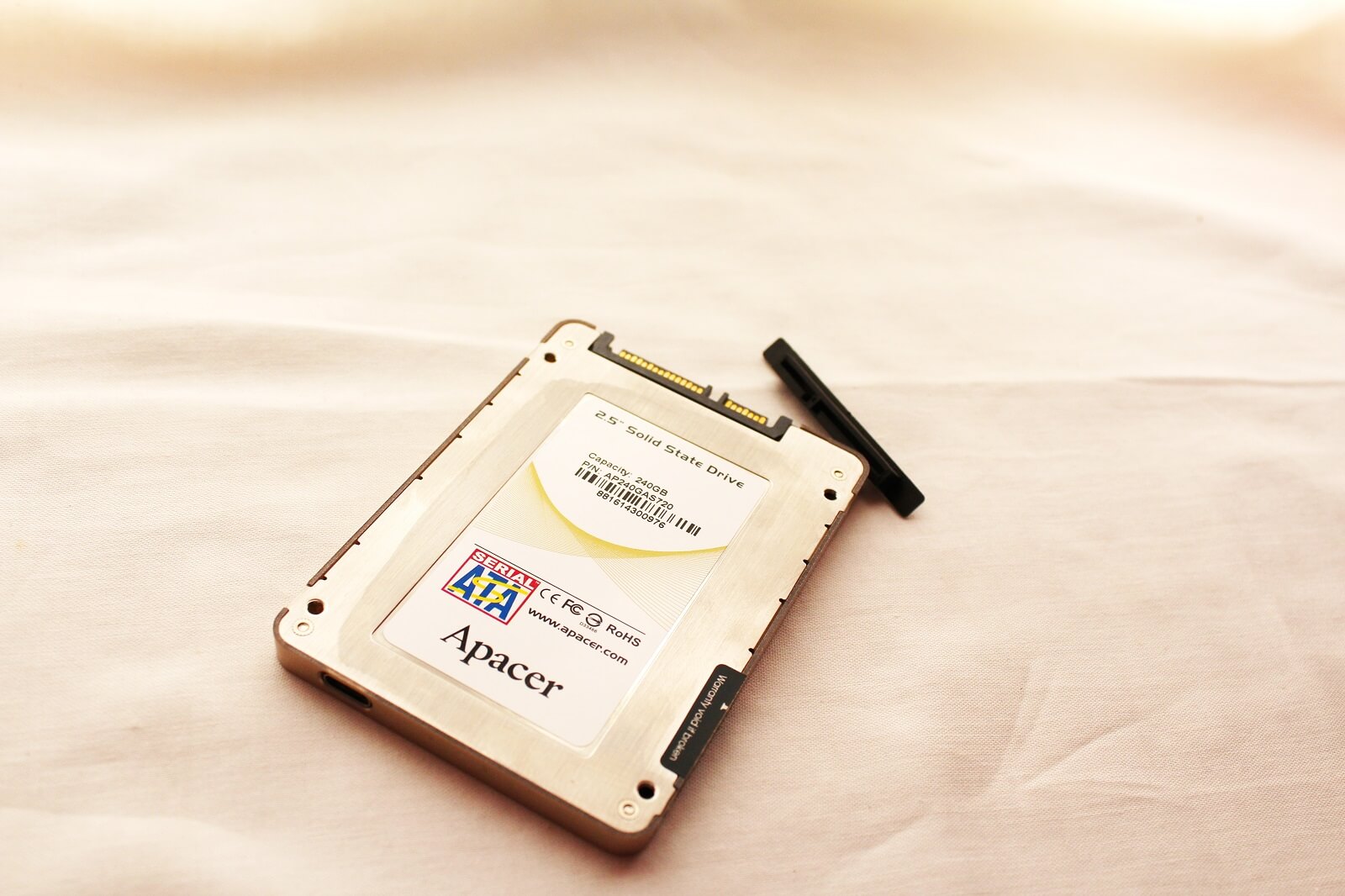 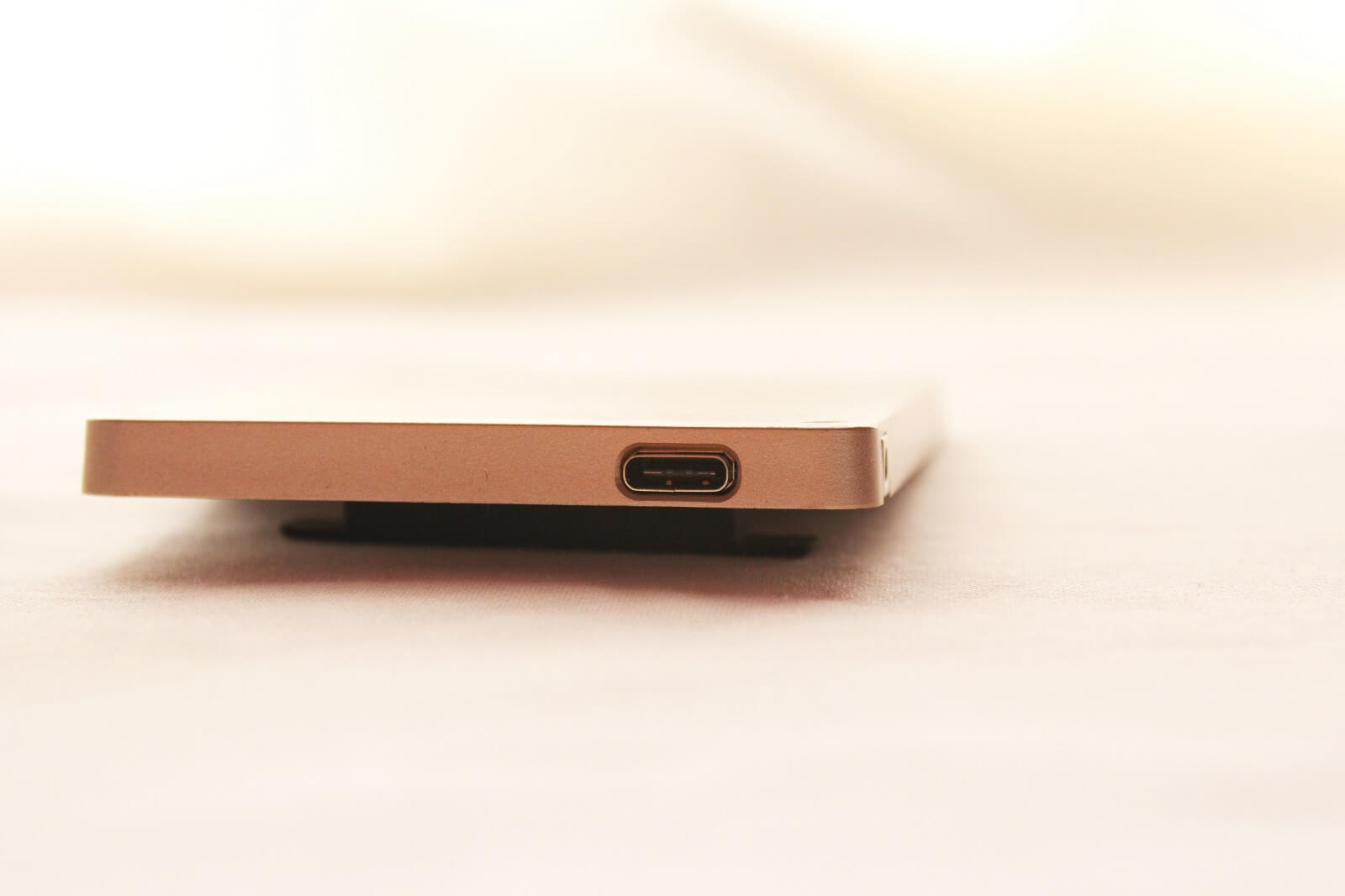 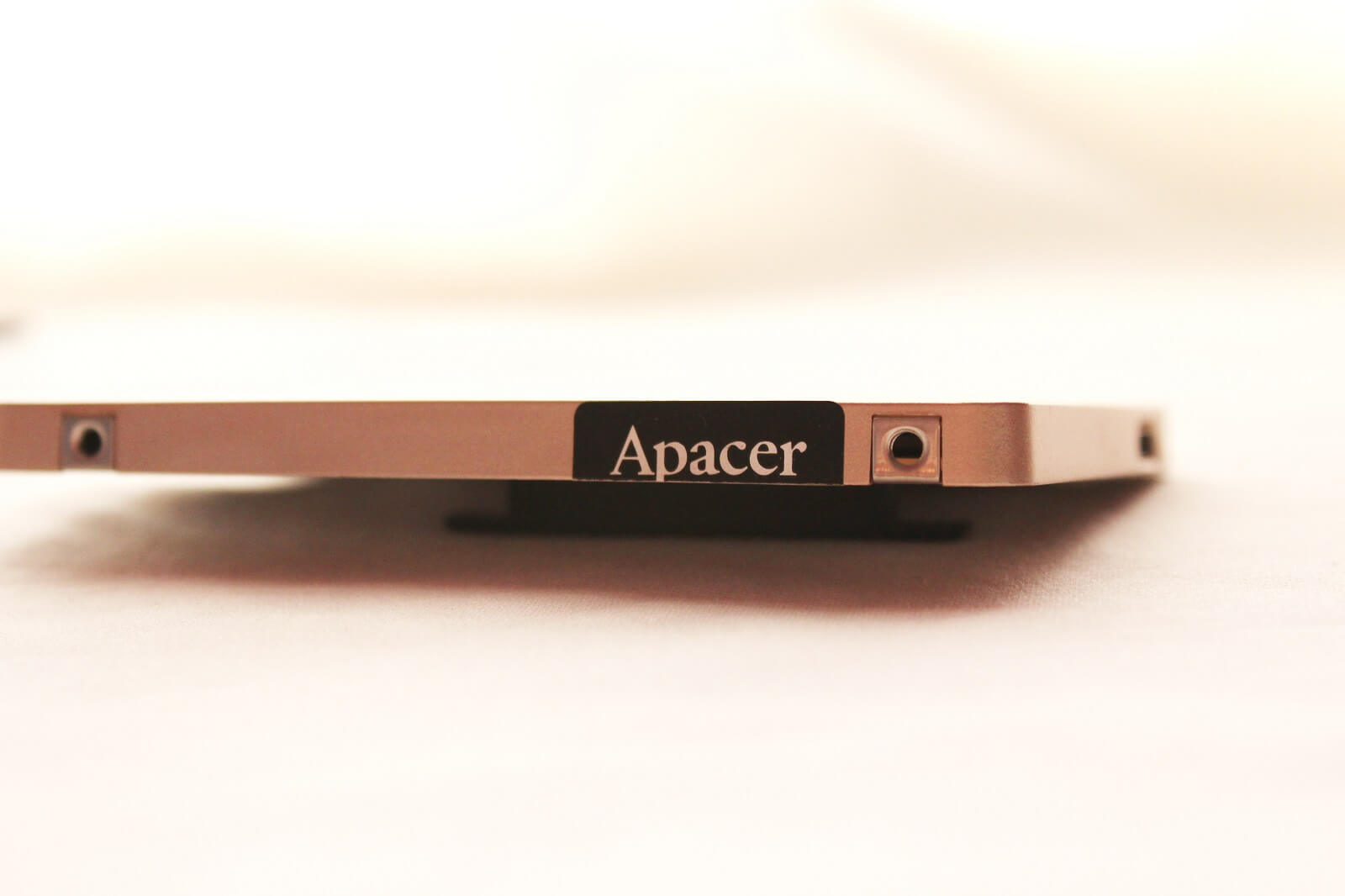 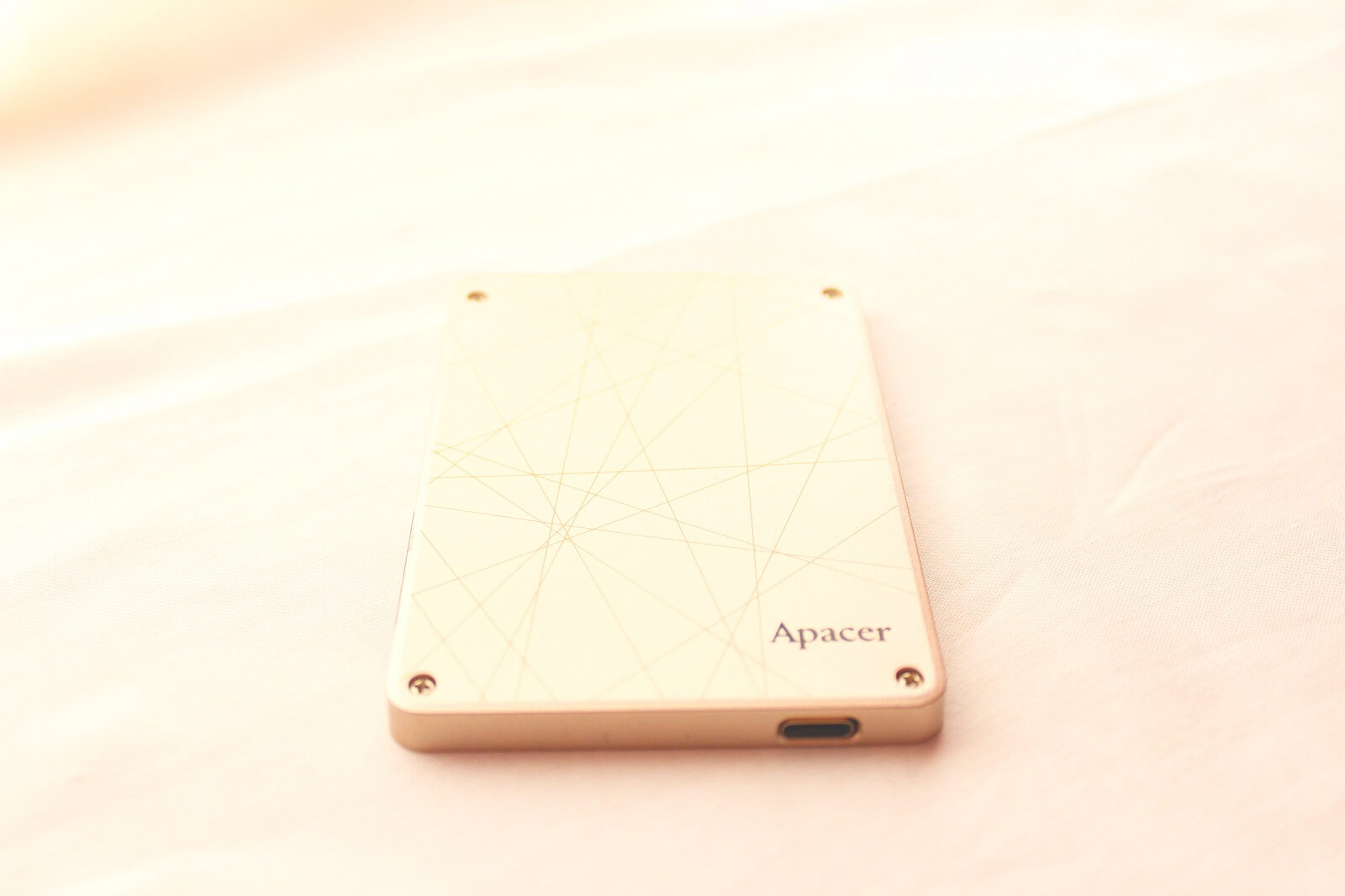 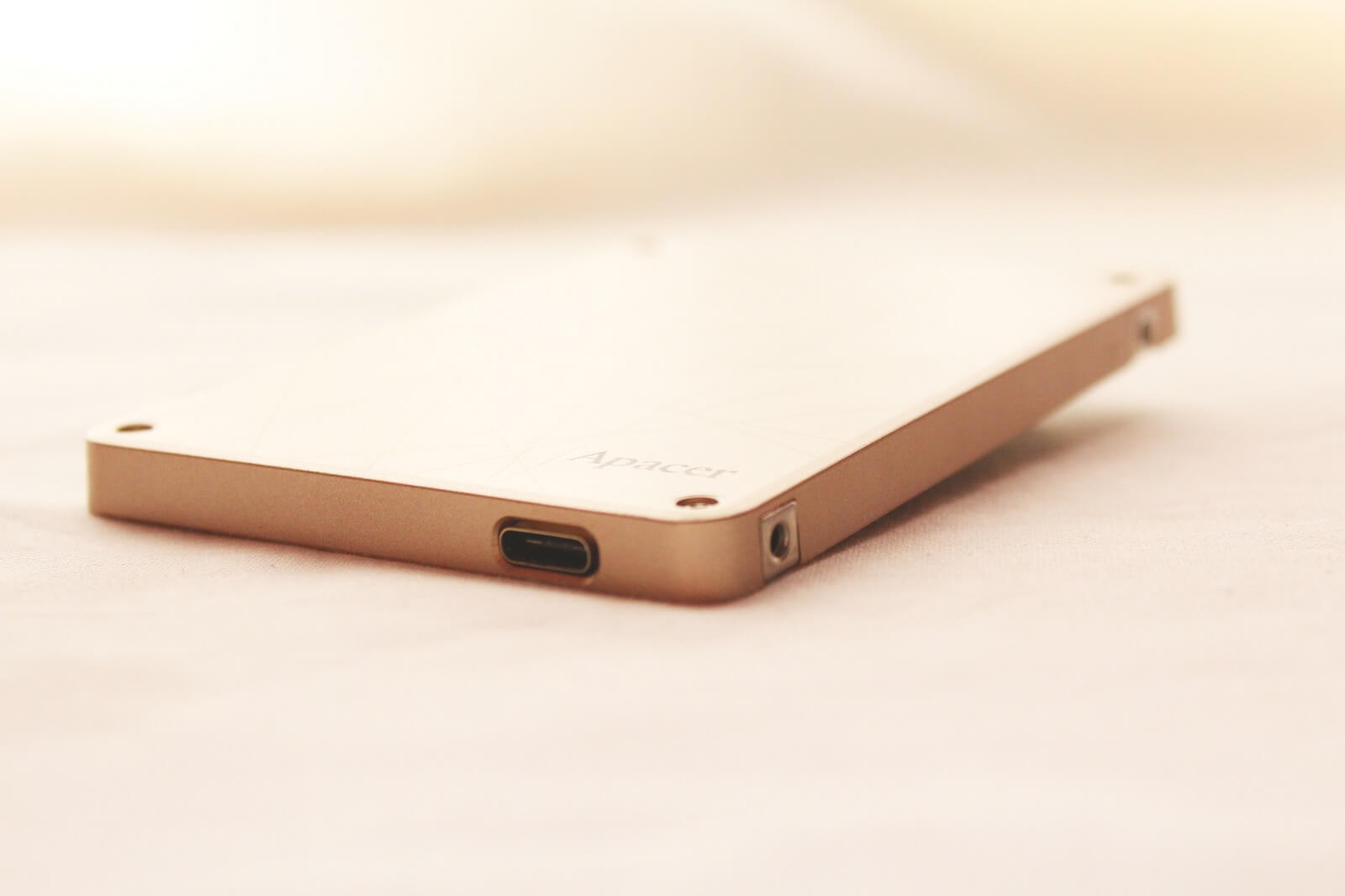 So as you can see, the SSD features both a SATA III 6Gb/s port and a USB 3.1 Type-C port. It also includes a rubber cover for the SATA ports; so if you decide to use the AS720 as a portable SSD, it protects the SATA ports from dust and damages. The SSD also have 2 screw on the left and right sides, and 4 holes on the bottom so you can install it as a internal SSD in the 2.5″ cage in your chassis. With AS720, you can enjoy the best of both worlds. 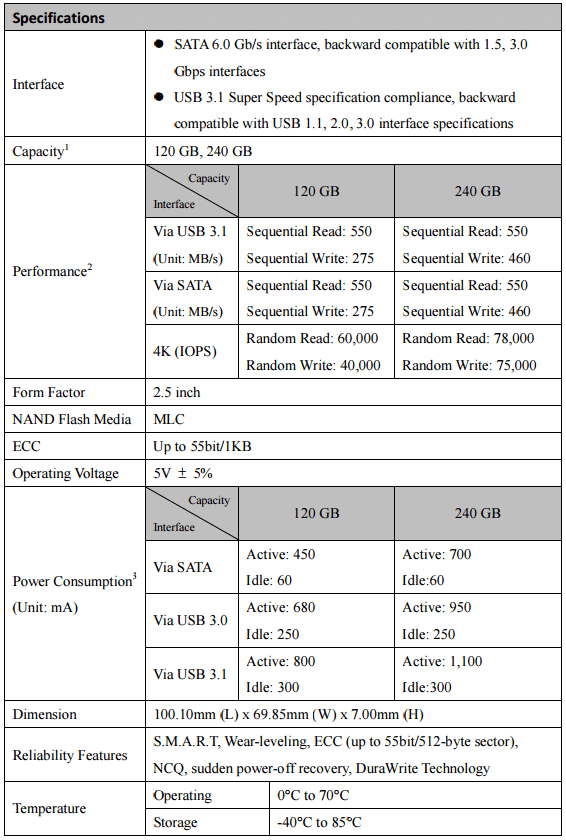 So even before you can use the SSD, you will first need to initialize the SSD. Without which, the SSD will not show up in your “My Computer” nor will it work as a portable SSD. 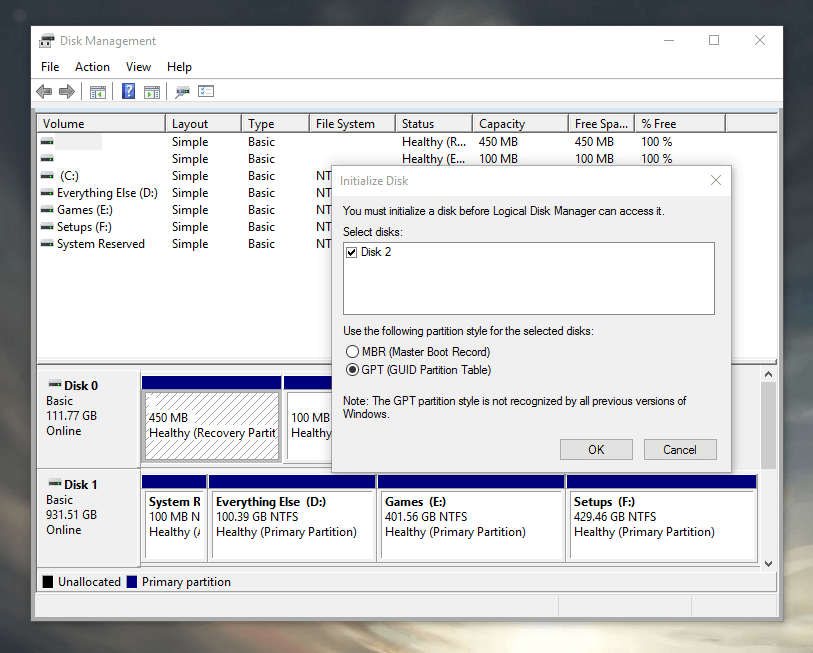 After that, the Disk will appear in the bottom tabs as unallocated. Right-click on it and select “New Simple Volume” and a new window should appear. 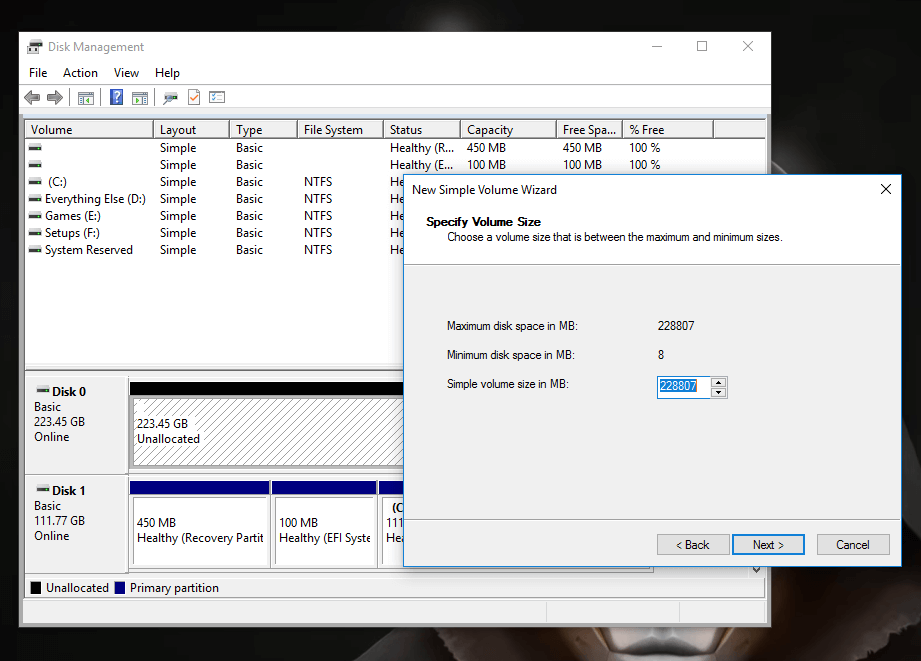 From here, you can either chose to use up all the available space and create a single partition or create multiple partitions with different volumes. Even though SSDs and HDDs are marketed as 120/240/500GBs and other capacities, it’s not the actual size that you will get in your system, and some of the space is already in use by system and hardware and what not kind of files. So is the case with Apacer AS720 and we get about 228807MBs or 223.44GBs of free space.

Once you click next, from this place, you can assign any letter to the partition you’re going to set up and click next.

From here, format the disk as NTFS and remember to tick the “Perform a quick format” and click next. If you want to rename the partition, just replace the value from the Volume Label. Click next, and the partition should start formatting. Once done, the partition should appear as Healthy and in your “My Computer” as well.

So we’re going to use a few different benchmarks to determine the performance of the SSD. In this review, we’re going to include the benchmark results from AS SSD, Crystal DiskMark, and Boot Racer.

Though one thing to mention is that, boot racer will only run on the AS720 when it was installed as an internal SSD. Both the other software were run on the SSD in both Internal SSD mode and with the USB type-C cable.

Apacer also claims that the AS720 SSD has the same speed in portable mode as it has once it’s connected via an SATA port. But in our AS SSD benchmark, it doesn’t seem to be the case. But bear in mind that there are two huge factors in this benchmark score. First, even though the SSD has a USB Type-C, our motherboard doesn’t. So it was tested with the USB 3.0 to USB Type-C cable provided with the SSD. Also, the quality of the cable can affect the speed. But still, the speed is acceptable coming from a world’s first dual-interface SSD and still beating the other two SSDs in the write speed in our comparison chart below. 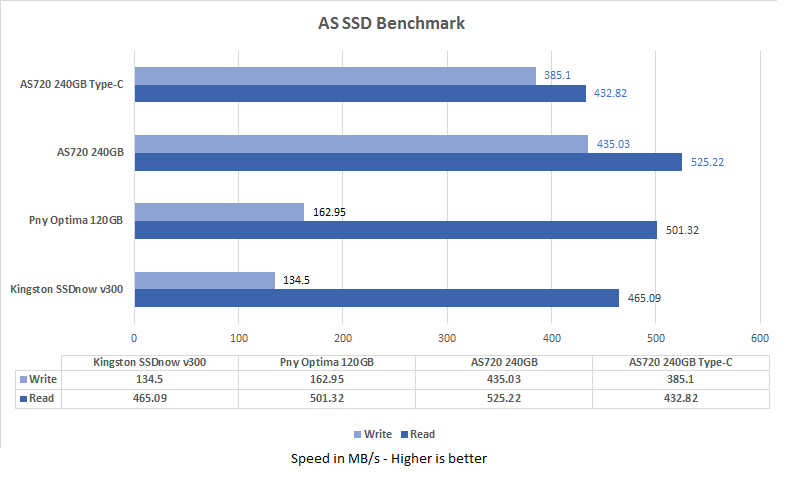 And compared to the other two SSDs I have at the moments, the Apacer AS720 SSD seems to be the clear winner in the competition. With a huge lead in the write speed and beating the Kingston SSD by almost 60MB/s in reading. 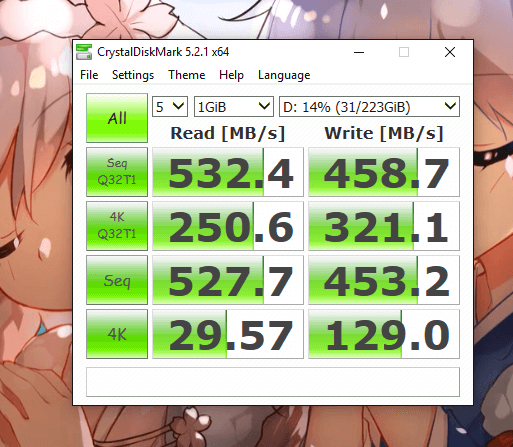 In the Crystal DiskMark benchmark, the scores are even closer to the advertised speed. The AS720 SSD was able to achieve 532.4 MB/s read, and 458.7 MB/s write speed. 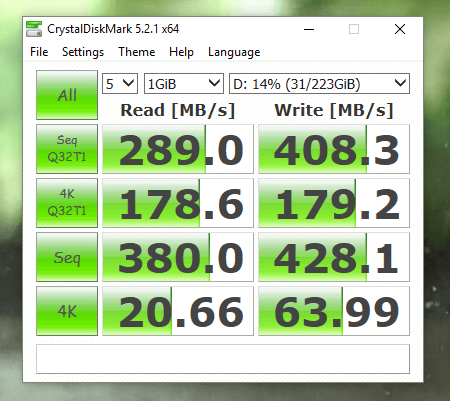 And once again, somewhat similar results once we tested the SSD with the USB Type-C to USB 3.0 cable. But still good enough to beat the other two competitors in the write speed in our comparison chart below. 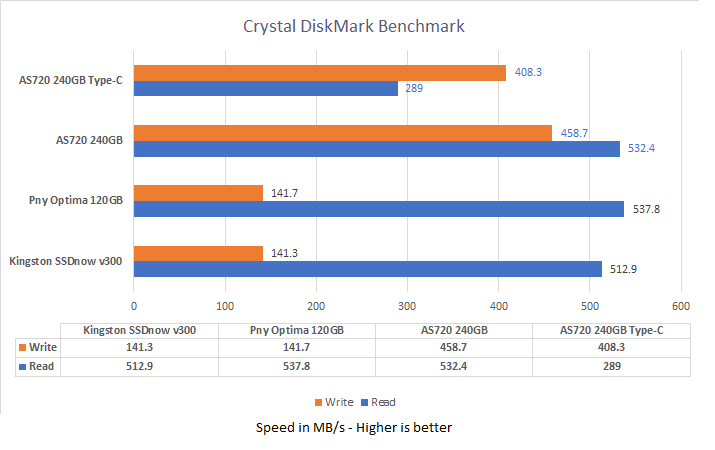 In the Crystal DiskMark, not only the Apacer AS720 SSD has seen an improvement in the speed, but also the competitors in this review. And in this benchmark, the AS720 also got beaten by the PNY Optima SSD but just by 5MB/s in the read speed while conquering in the write speed against both competitors.

Boot Racer is a program that calculates the Windows boot timing and also how long it took to get the desktop ready. And the best thing is it’s a free software so you can test your PC as well and compare it against our chart below. 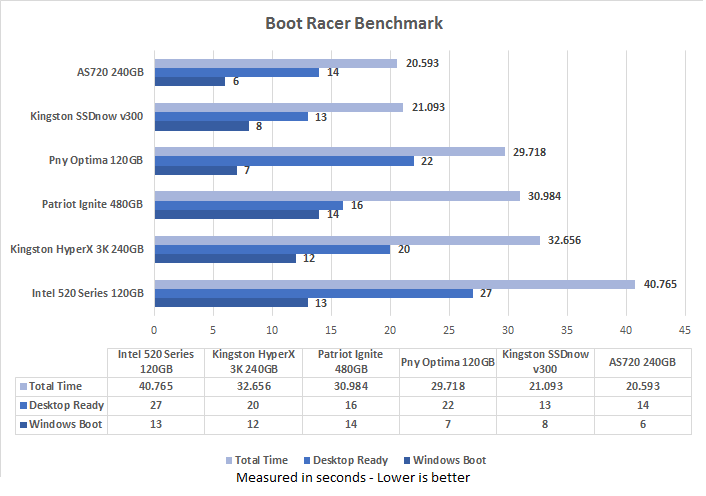 And as it can be seen clearly in the graph, the Apacer AS720 tops all the other SSDs. The AS720 and Kingston SSDnow v300 only had Windows 10, AMD GPU driver, Realtek Audio and Realtek Lan drivers installed during the tests. These three things are the bare minimum that a system will be needing on a fresh install. And according to the charts, the AS720 is ahead of the Kingston SSDnow by 2 seconds on boot while behind one second behind before full desktop is ready. But in total, it’s still half second ahead.

The PNY Optima SSD in the chart is the one I’m using primarily in the system for Windows and other software. So the PNY shows results that you might see in the real-world scenario. But even there, the AS720 takes the lead in Windows boot timing while there’s a big gap when it comes to the software loading times.

Now, mind you, that the other SSDs that were not included in the previous benchmarks, these scores are taken from fellow reviewer Iggy and Nathanial’s reviews. We three do not have the same specifications. Hence there’s the specification factor that may or may not has affected the scores. But it can be easily said, that I have the best rig amongst the DragonBlogger Staff when it comes to windows boot timing. Coming back to AS720, the other SSDs in the Boot Racer benchmark just helps out in highlighting the impressive performance of the Apacer AS720.

Apacer also has an accompanying software for the Apacer SSDs. You can download the tool from HERE. To use the application, be sure to have the Apacer AS720 SSD plugged in, and execute the software with the “Run as administrator” option. 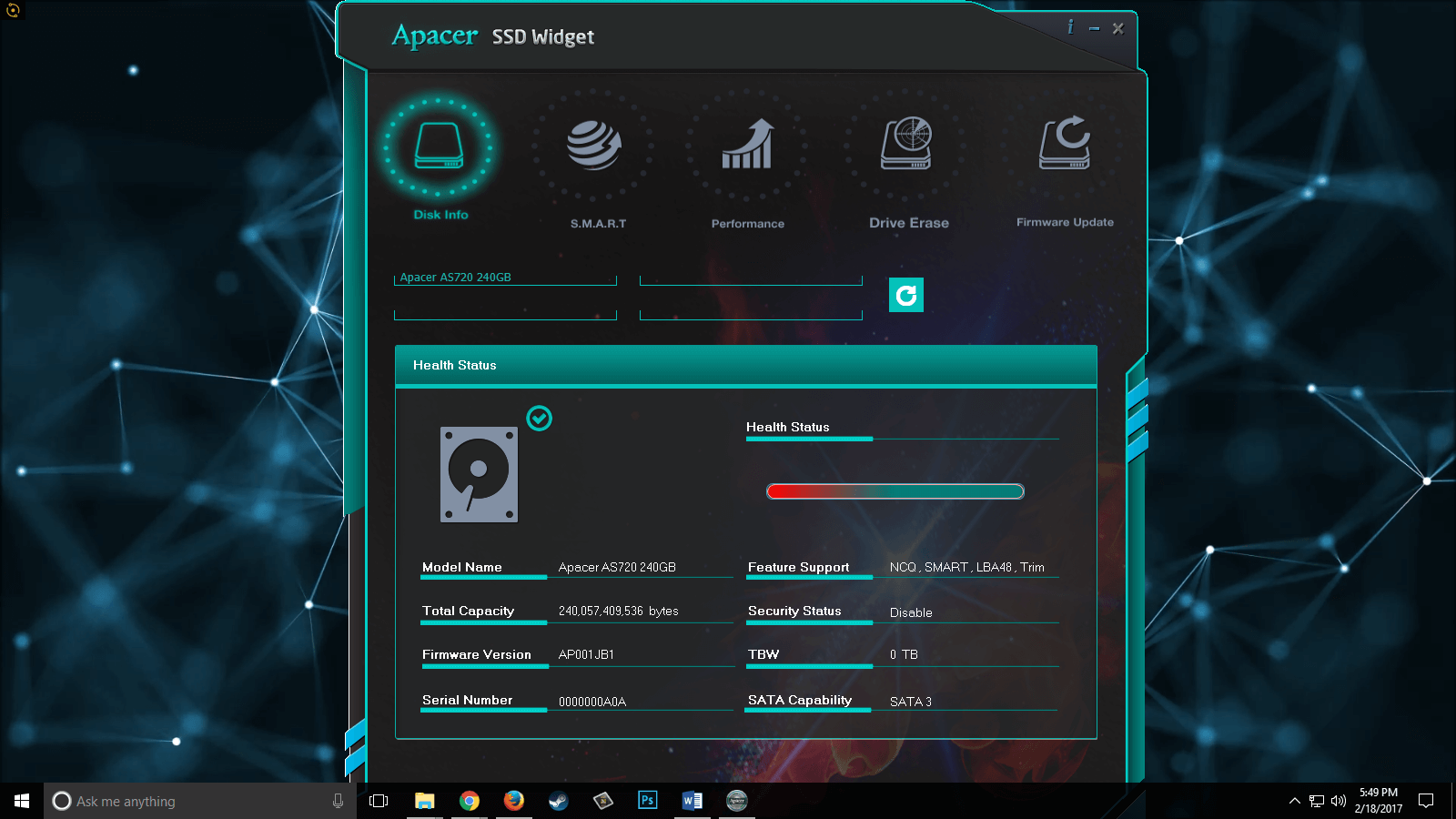 This is the screen where you’ll be taken to once you open the applications. From here you can see there is a total of 5 tabs; namely, Disk Info, S.M.A.R.T, Performance, Drive Erase, Firmware Update. In the Disk Info tab, you can see the various information about the SSD like model name, firmware version, capacity, and health status. But what you cannot see is how much space is left on the SSD. Something that would’ve been good to see as well. 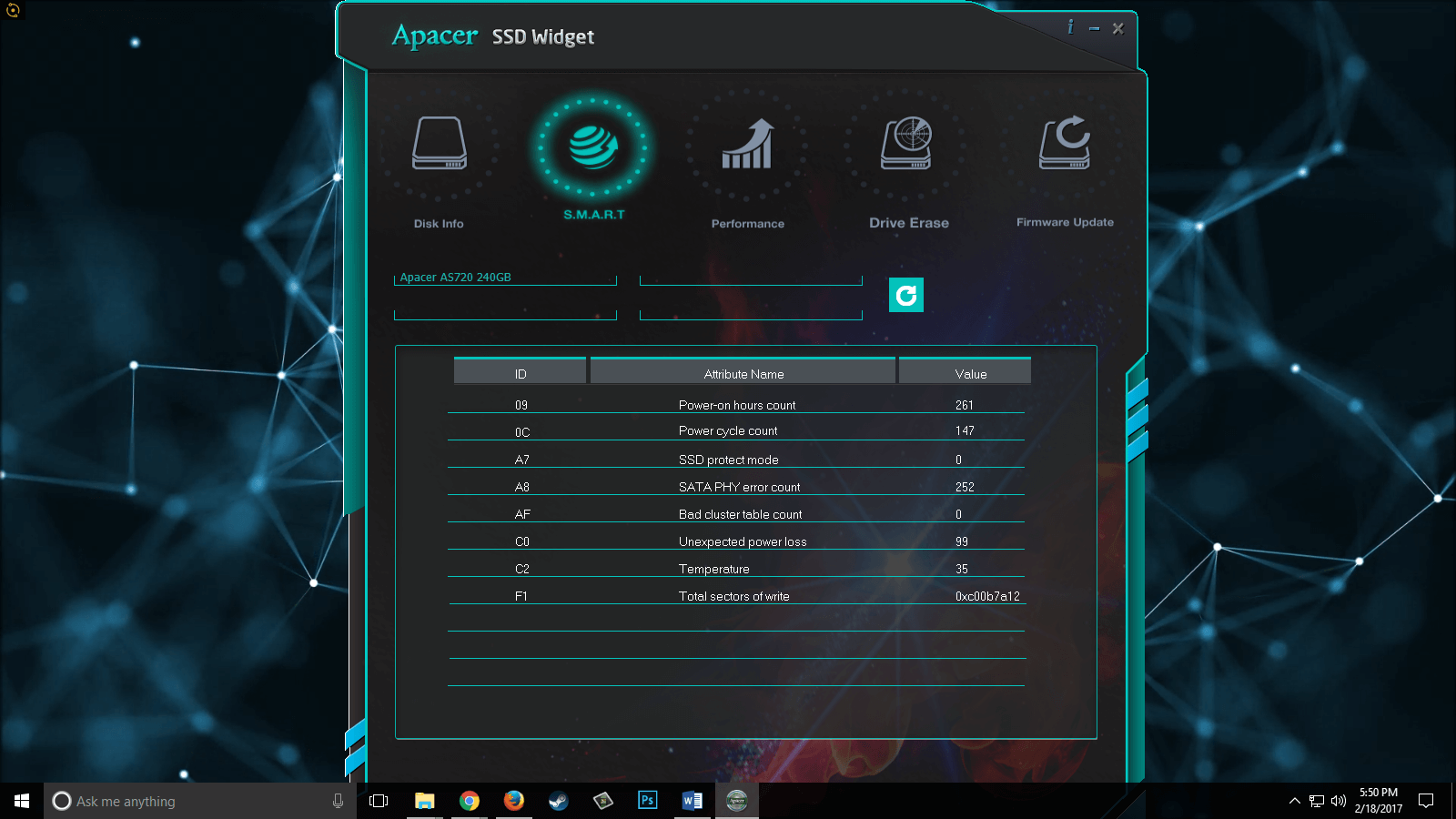 In the S.M.A.R.T tab, you can see various attributes and their values of the SSD. You can also monitor the temperature of the SSD from here. 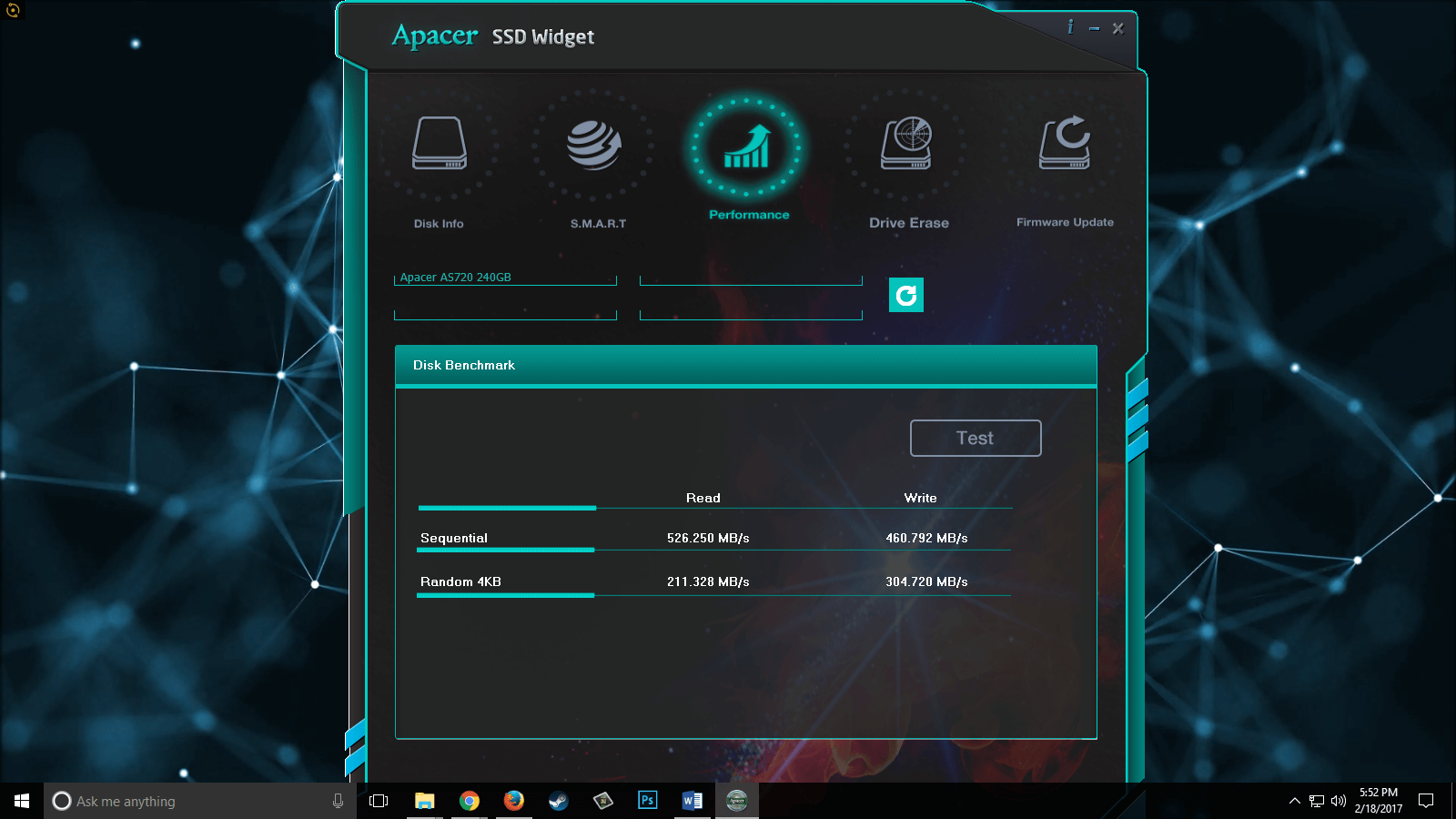 Apacer’s widget also has their disk benchmark in the application. And the results here are almost identical to that of our other benchmark results mentioned above. 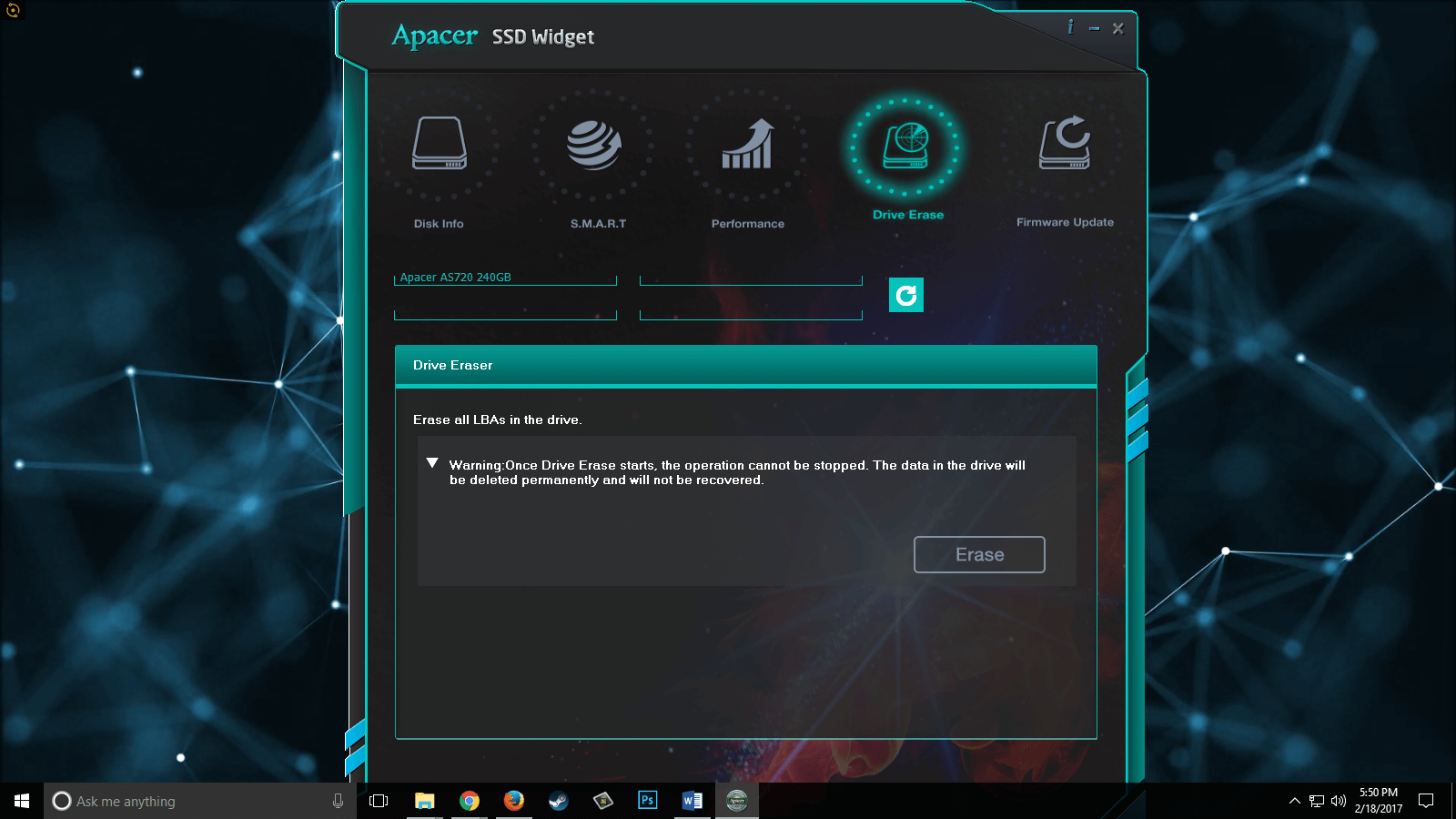 Well here, as the name suggests, you can erase the data from the SSD. 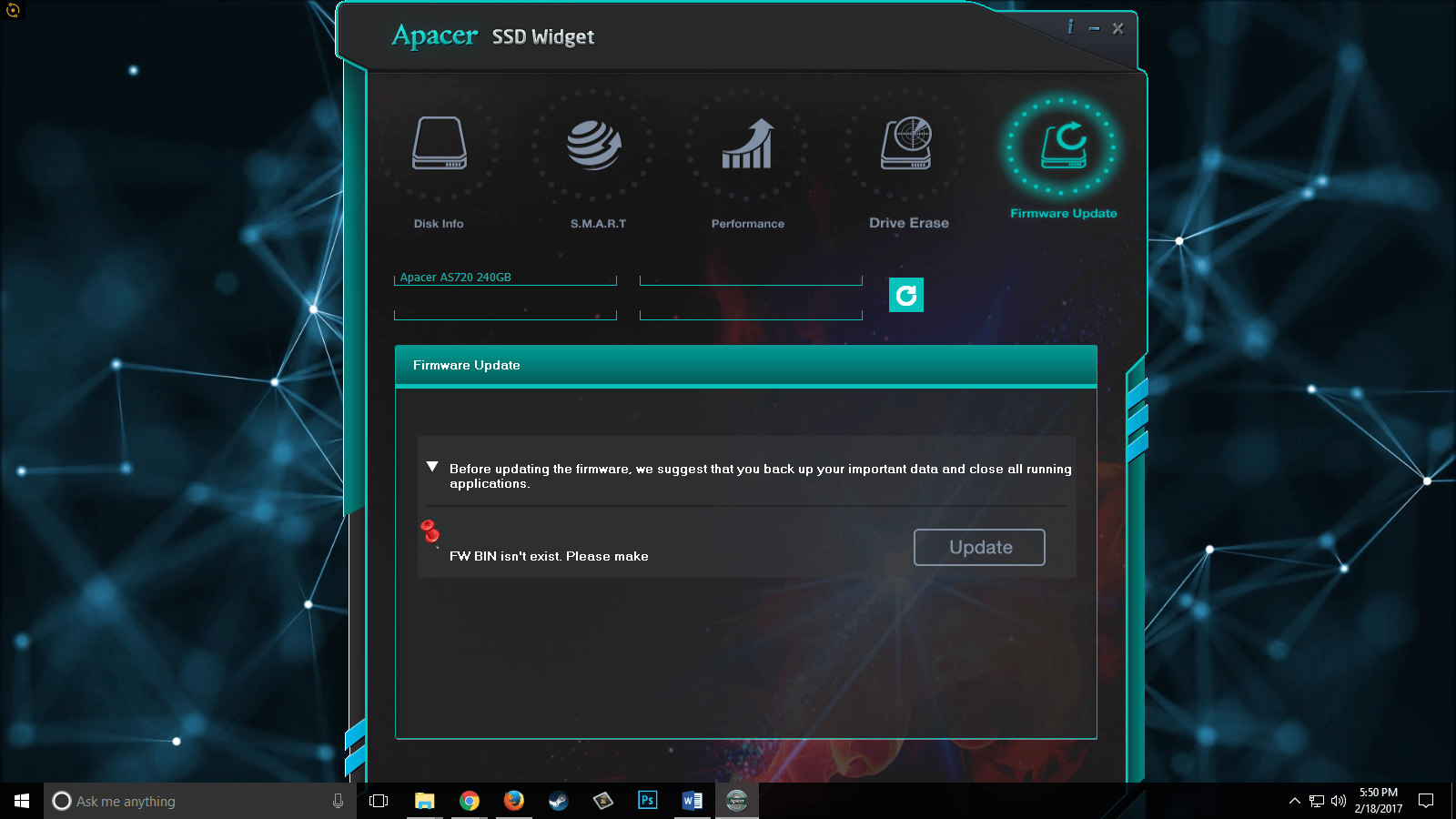 And from here, you can update the firmware of the SSD. Though it is also suggested that you backup your data so I guess there’s a chance that the data will be deleted from the SSD. I didn’t had a chance to test it out since the AS720 in our system is running on the latest firmware.

Well, it isn’t hard to say that Apacer’s AS720 is a great SSD with top-notch performance. Don’t forget that it’s a very first of its kind, with dual-interface, but that doesn’t stop it from outperforming the competitors in our benchmark. It’s said that with innovative ideas, new problems arise, and I was indeed, not expecting the results I got from the AS720. But it seems like Apacer has been planning this for a while, and they wanted both the dual-interface concept and the performance in a single unit. And they have certainly achieved their goals.

Well as mentioned above, there is indeed one issue with the SSD. The Apacer AS720 runs a lot hotter when used via the USB cable compared to when it’s installed via the SATA cable. Higher temperature can also mean it may or may not have an effect on the life of the SSD. So I would recommend using the SSD via the USB for shorts periods and not to run programs directly from the SSD when it’s connected via the USB cable for extended periods. But if anything happens, the AS720 also comes with 3 years warranty so Apacer has your back.

The Apacer Widget doesn’t seem to be an interesting software. Nor is there a need for the software for the options it provides other than the firmware update. You can use your AS720 SSD without using the software. Also on thing which I found annoying about the SSD Widget was that it couldn’t be resized, which was quite odd. 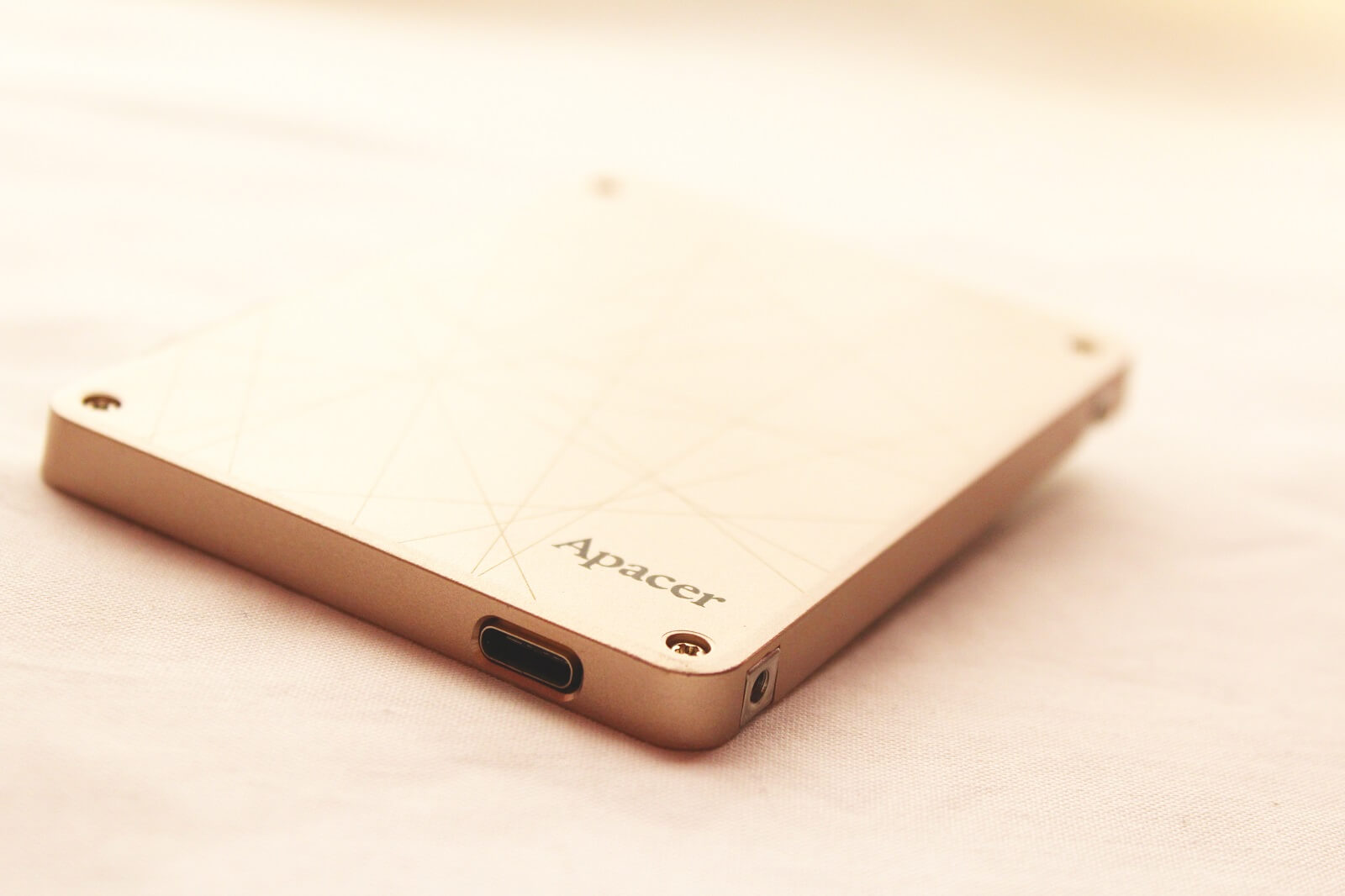