A few days ago, we reviewed the world’s first dual-interface AS720 SSD from Apacer, and now we’re back again with another of Apacer’s product review. This time, we’ll be looking at the Apacer Blade DDR4 dual channel 16GB RAM kit. The Apacer Blade DDR4 is available from 2400MHz at 1.2v all the way up to 3600MHz at 1.35. But the one we will be reviewing today is running at 3000MHz stock at 1.35v on CL16 timing.

With a tactical saber in hand, the strongest survivor in the battle can draw on minimal resources to turn it around and win victory. Apacer launches cross-generation DDR4 flagship – “BLADE” DDR4 overclocking memory module, which is compatible with Intel® Skylake processor and Z170 chipset and boasts a clock rate up to 3600 MHz, providing unprecedented computing performance and energy-saving efficiency. 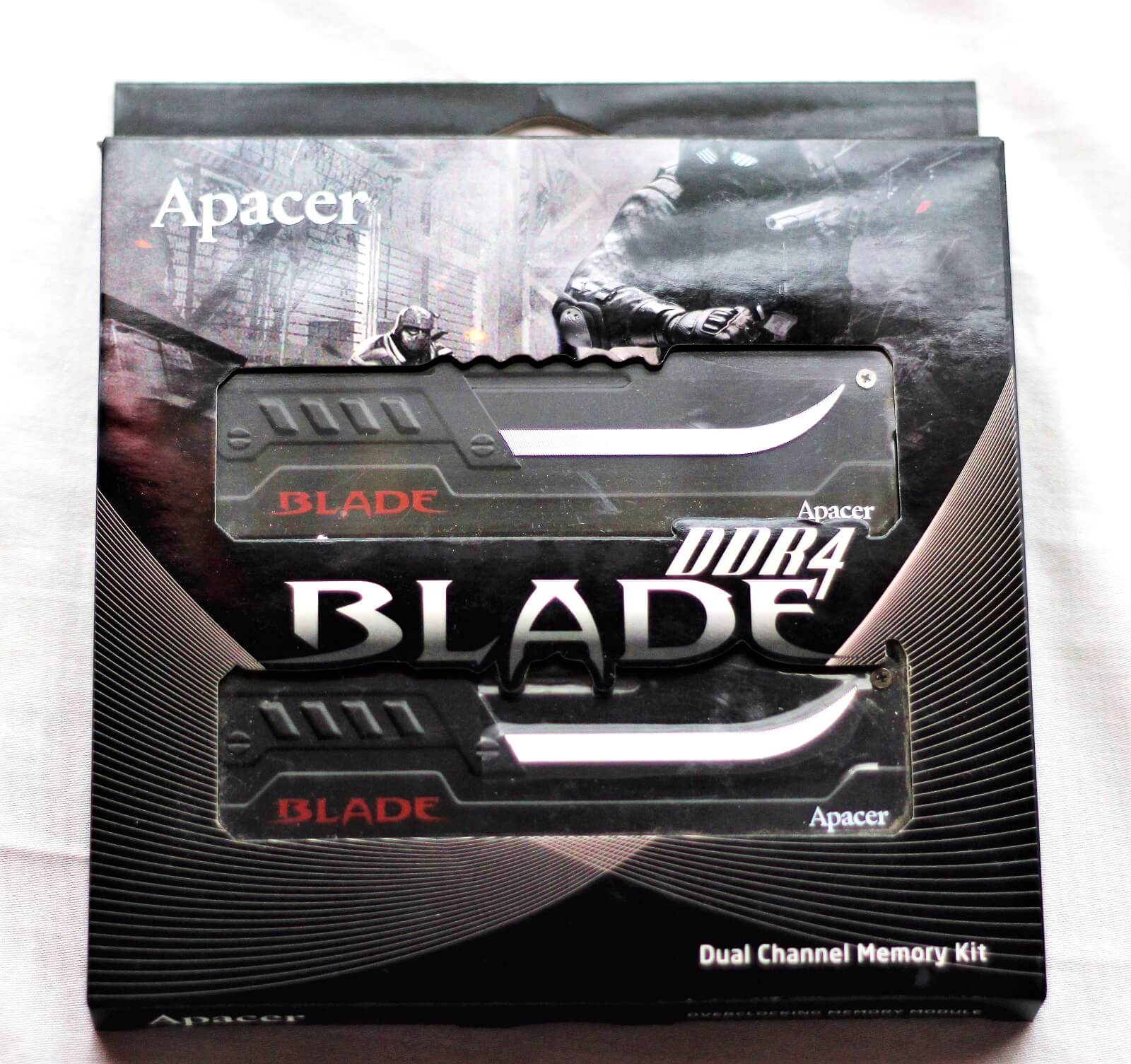 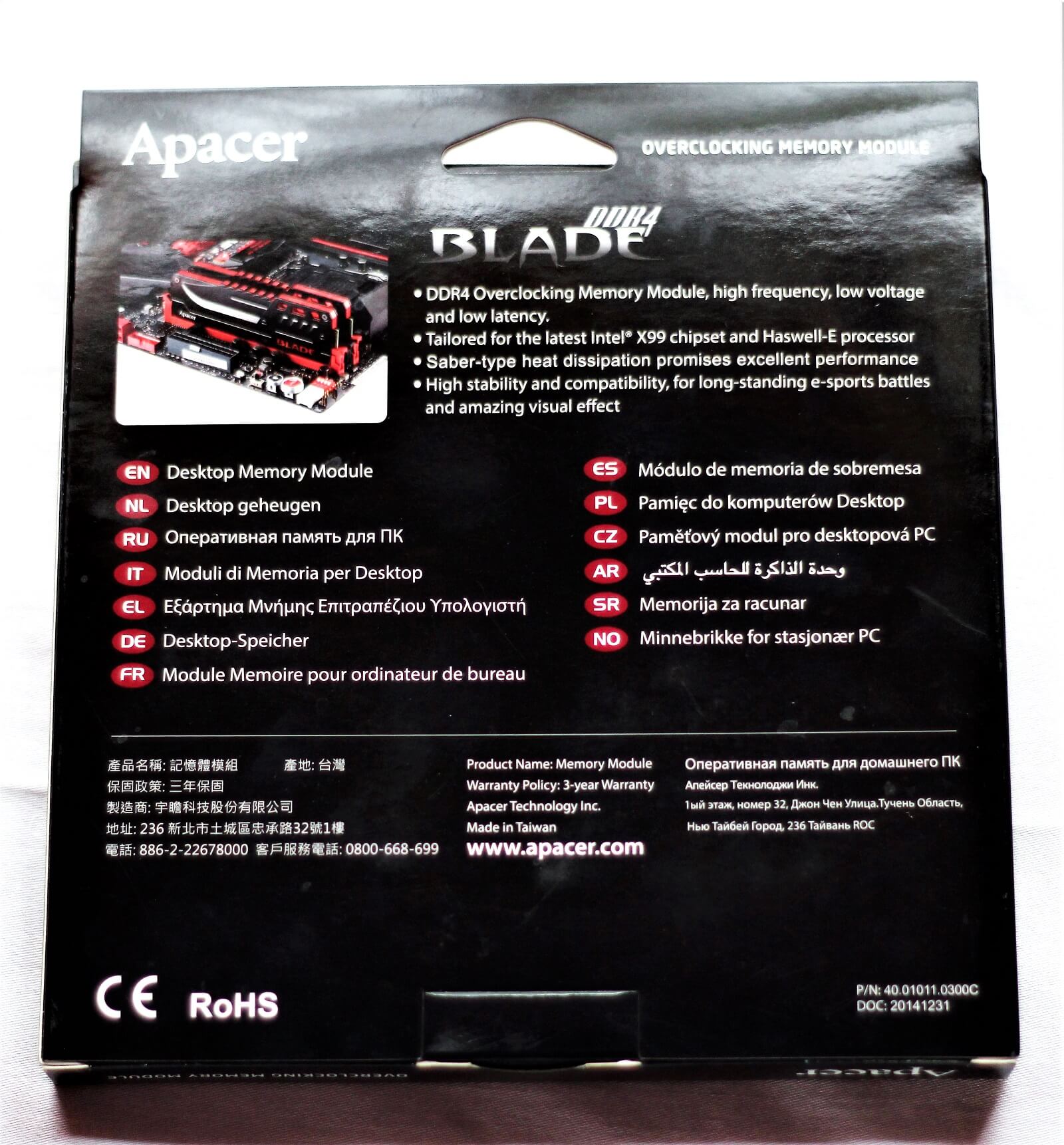 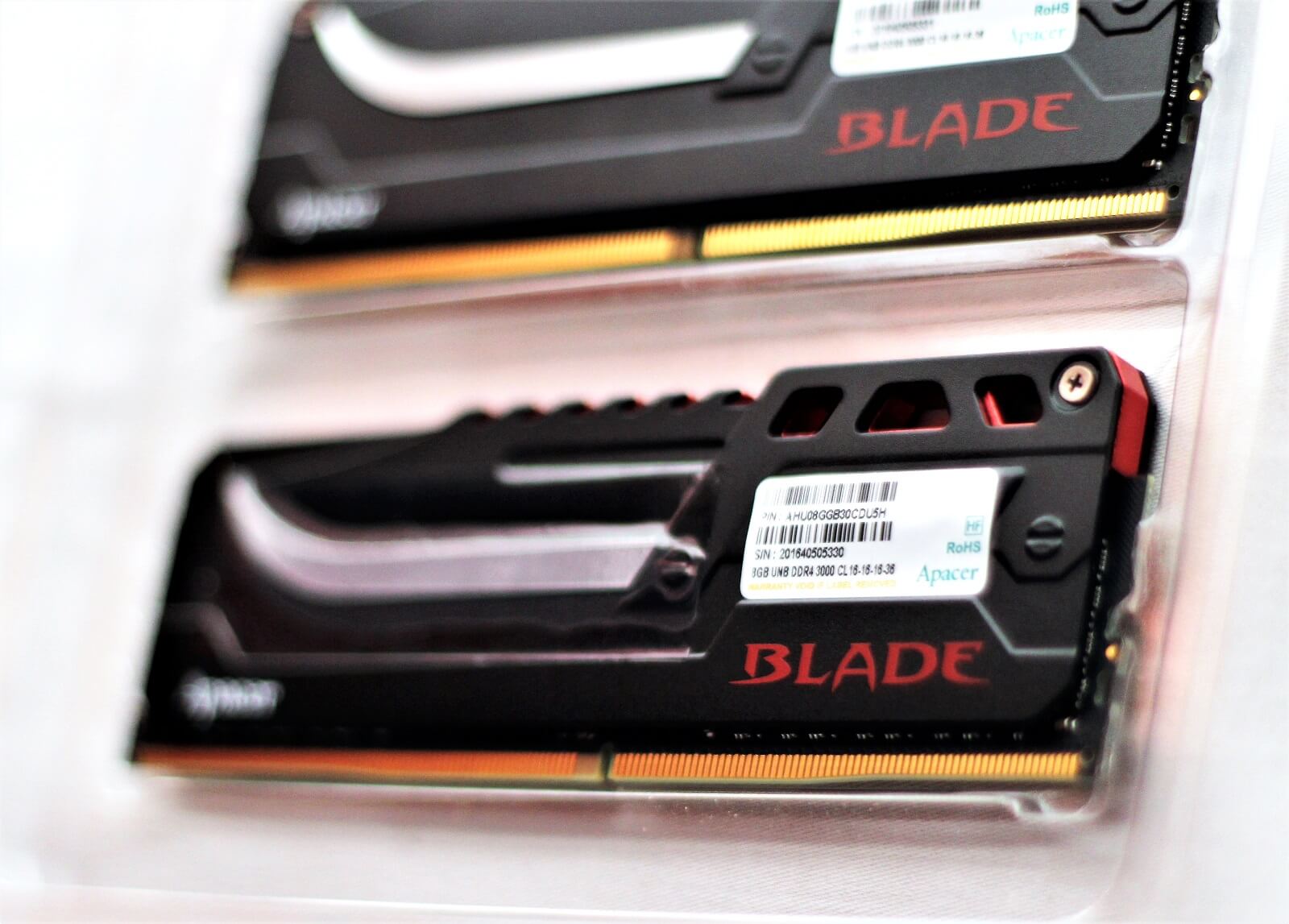 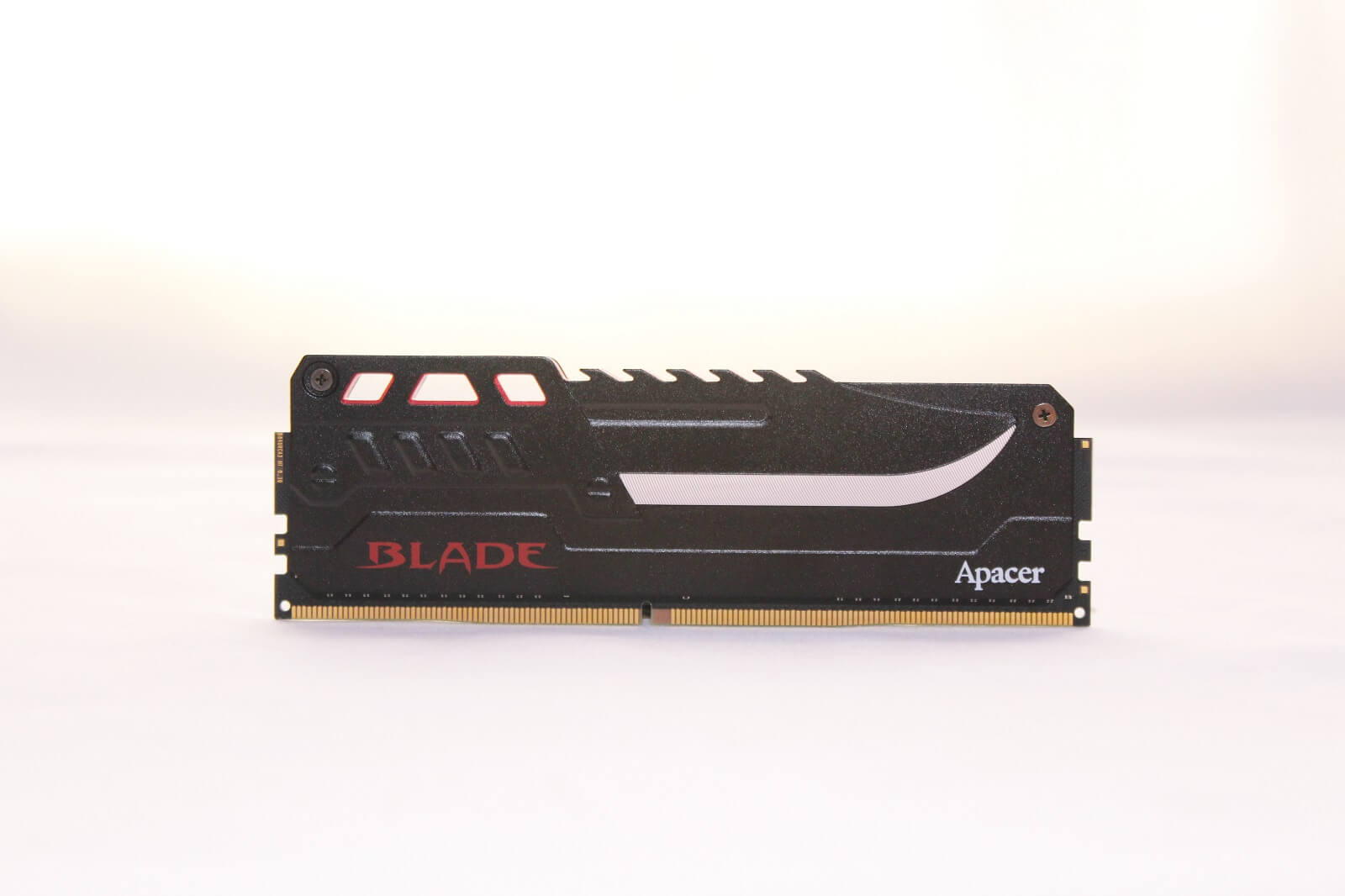 As seen in the video, the Apacer Blade DDR4 RAM features a black colored matte finish primary aluminum head spreader. The design is what Apacer is advertising as an “Armory Design” which looks good with Jaws-like top and some cut-throughs beside them. From this view, it isn’t clearly visible, but the top of the head spreader has a secondary aluminum tub in red color giving it a red/black accent. The only hint of that is the Blade test in red color while there is a sword’s blade shaped metallic material attached to the body of the RAM. And giving it the finishing touch is the Apacer text written in the bottom right corner. 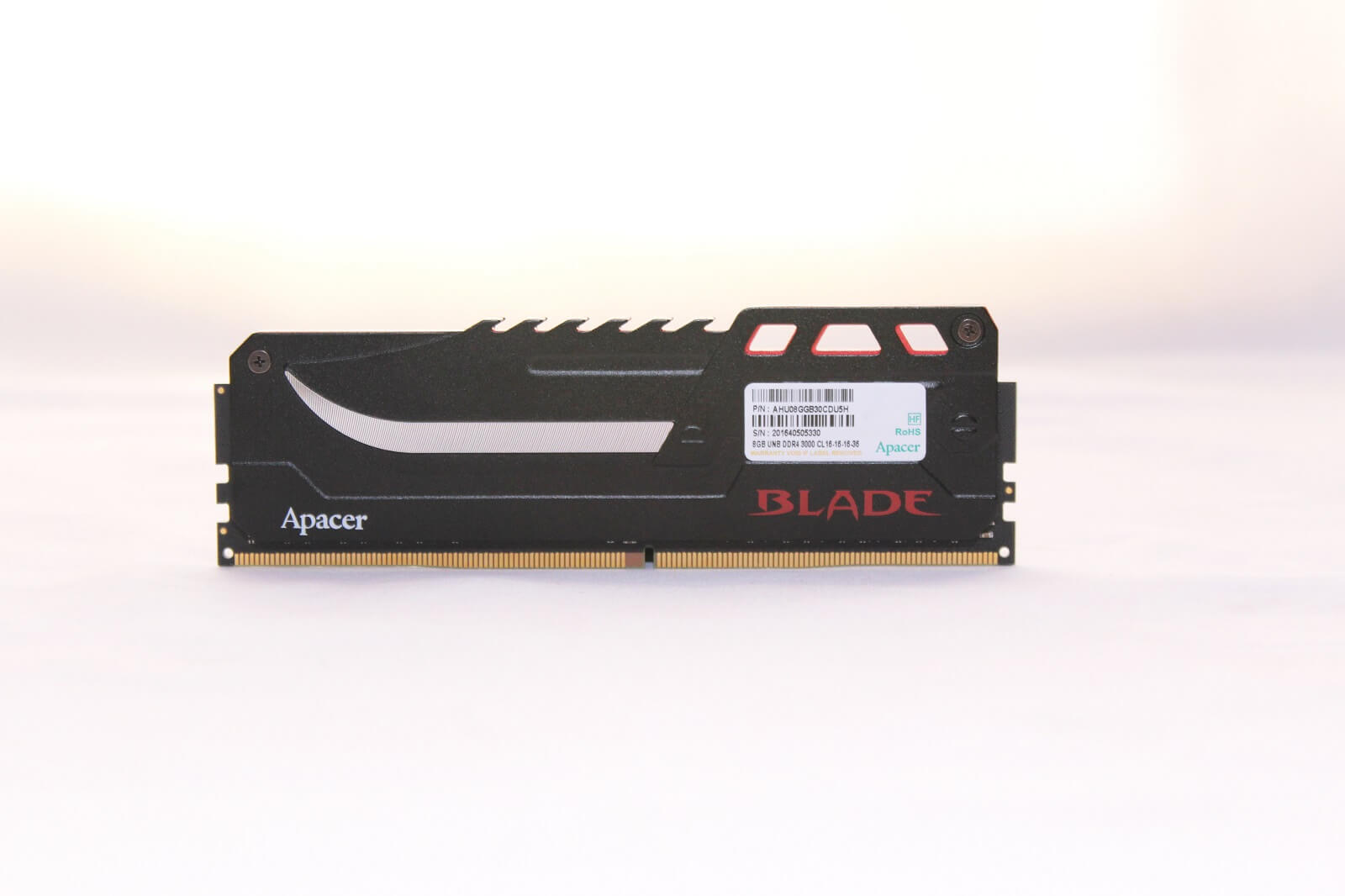 The back of the RAM has the same design, but there’s an information sticker attached to it. 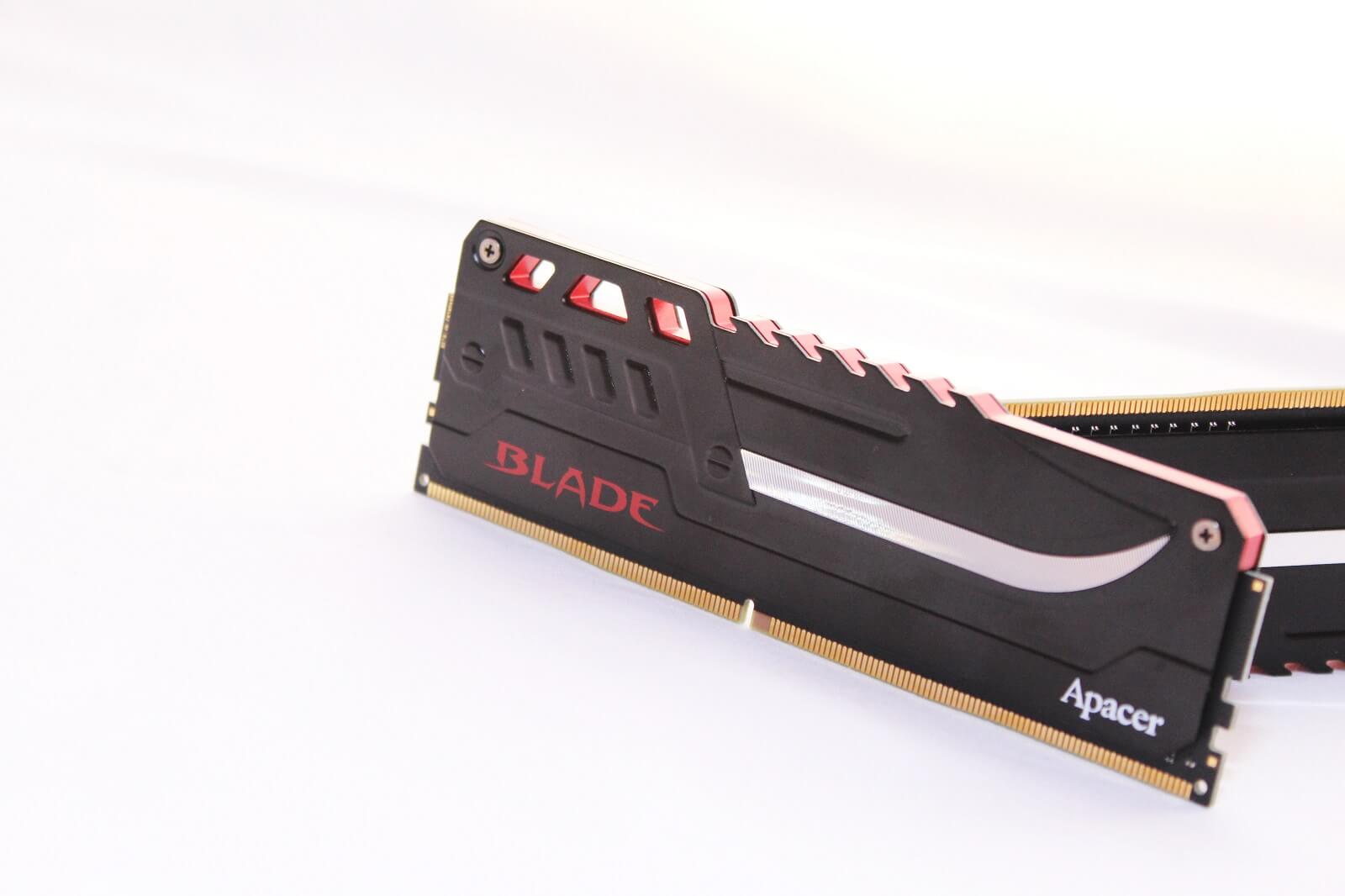 In this view, you can slightly see the Red aluminum tube of the Apace Blade which will be the only thing visible from your perspective when the RAM is in your system and your standing in front. 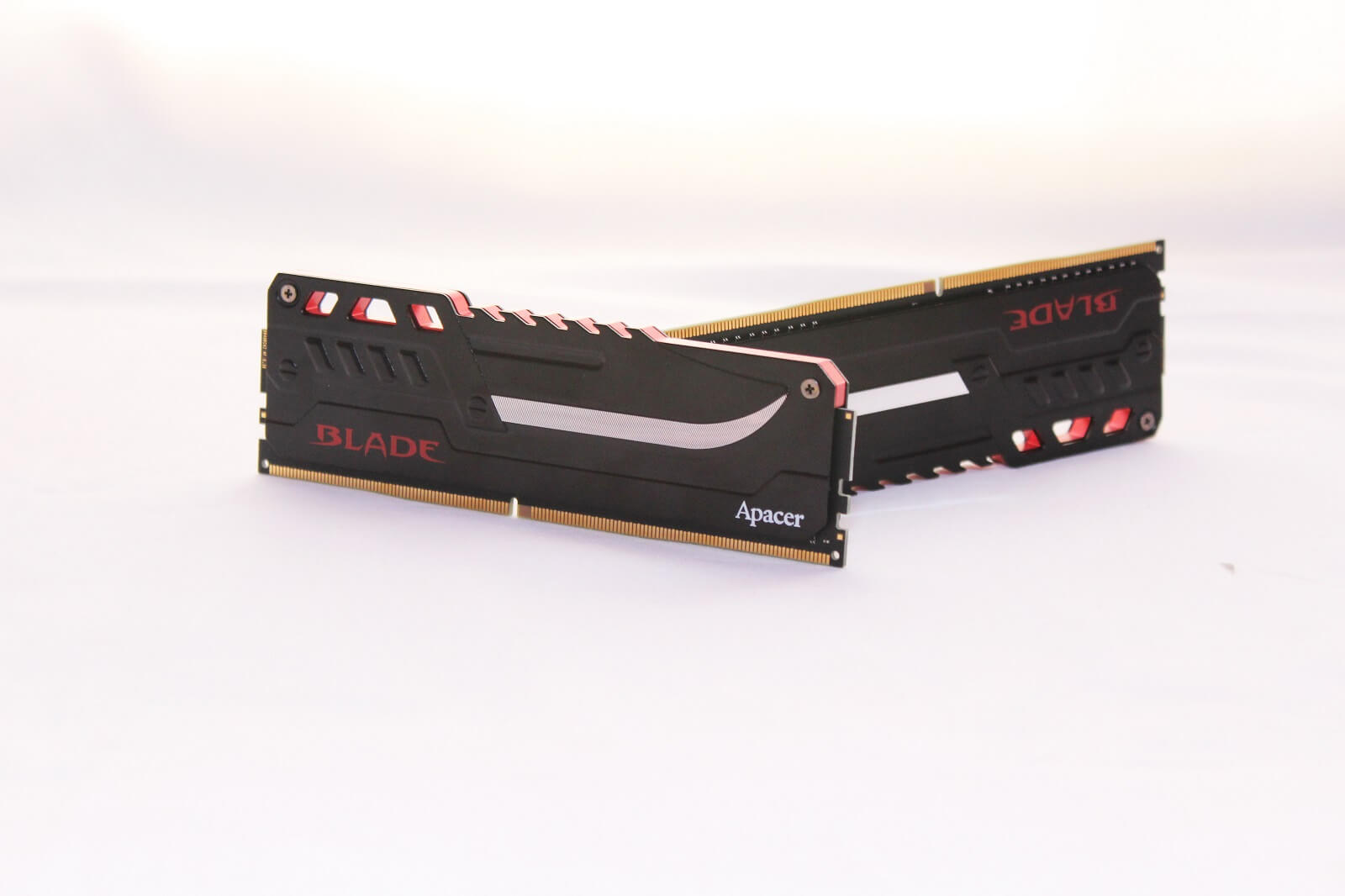 Because of the lack of that particular screwdriver, I wasn’t able to unscrew the head spreader to give a view of the inside. But once I do, I’ll update the review with more pictures, meanwhile enjoy the above pictures.

So first, the RAM will be tested with various benchmarking software on the stock speed of 3000MHz at CL16 at 1.35 volts. These softwares include Aida64 Extreme Edition, MaxxMem, SuperPi 1.5, WinRAR Benchmark and PassMmark PerformanceTest 8. Then the RAM will be tested for overclocking capability. And if we can push the MHz higher, then after achieving the sweet spot of lowest voltage and CL timing, a stress test will be run, and then the same benchmark software would be run again. 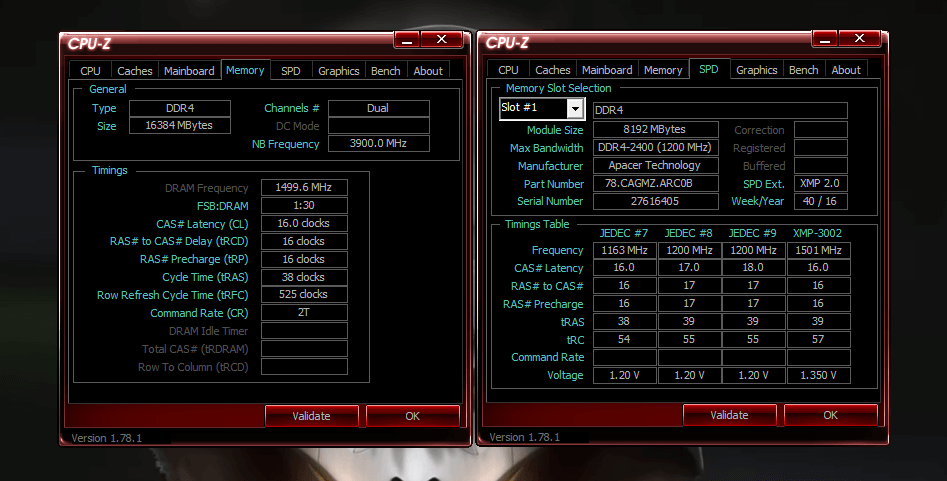 So once the Apacer Blade DDR4 was installed in the system, after like 3 reboots if I remember correct, the system booted. And since we were using another RAM previously with XMP profile, the Blade booted at it’s stock 3000MHz speed at 1.35v on CL16. I didn’t have to do anything in the BIOS to make the RAM work with the Asus Z170P motherboard. I ran the Aida64 extreme stress test for a few hours, and the Intel Extreme Utility stress test and benchmark test and I didn’t come across any issues, so I knew the RAM was working perfectly fine on the advertised speed.

So let’s get into some of the benchmarks. And for comparison purpose, the chart also includes HyperX Fury DDR4 2133MHz RAM which was benchmarked on the same system, while the DDR3 kits were running on my previous setup. This means the benchmark scores might or might not have an effect on the actual scores because this is not the ideal situation for a benchmark comparison. But to give an idea of the performance, I’ve included them as well. 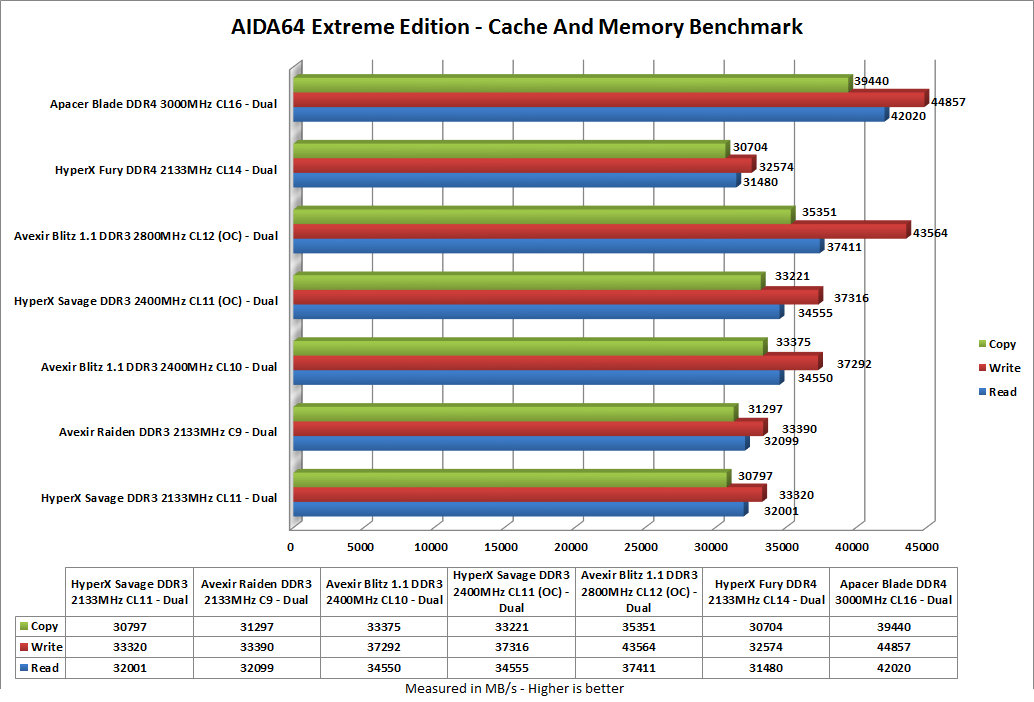 So first up, we have the Aida64 Extreme Edition Cache and Memory Benchmark results. And when it comes to read, write and copy speed, there’s no one remotely close to the score of Apacer Blade RAM. The only RAM that got close to the Apacer blade was the 2800MHz CL12 overclocker Avexir Blitz, but only in the write speed, while there’s huge lead in reading and copying performance of the RAMs. Bear in mind, though, that the Apacer Blade is the only RAM in this chart with 3000MHz frequency, so the results came out as expected. 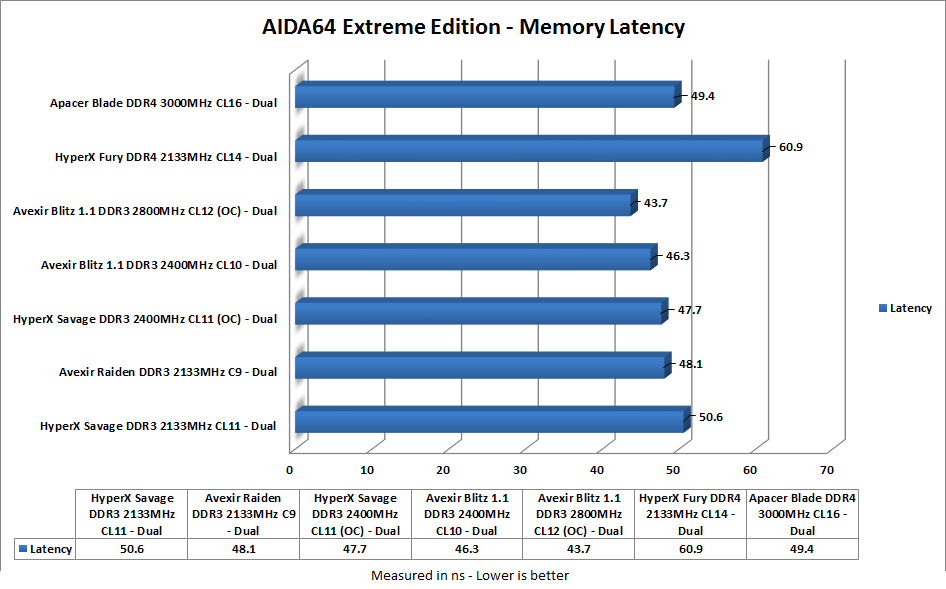 And when it comes to the latency of the Apacer Blade, it stands at about 49.4ns. Compared to other RAMs, Apacer Blade is the only RAM with CL16 timing in this chart. And at 49.4ns, it seems like a good deal to me. 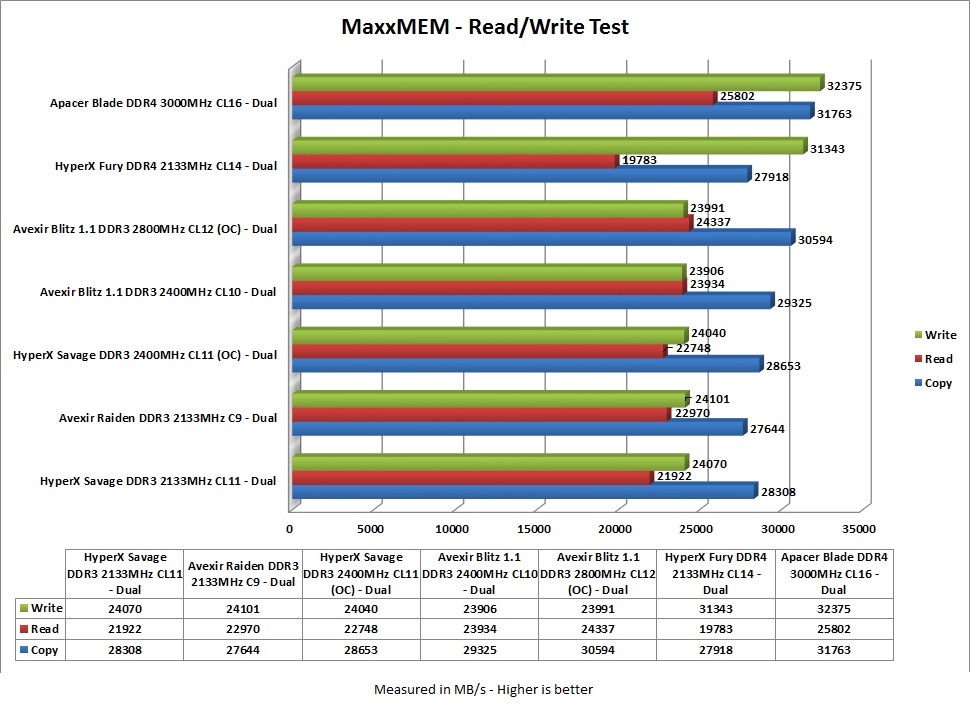 In the MaxxMem benchmark, the lead of Apacer Blade has somewhat decreased. But from this chart, we can also see the performance difference in the write speed of DDR3 vs. DDR4 architecture. 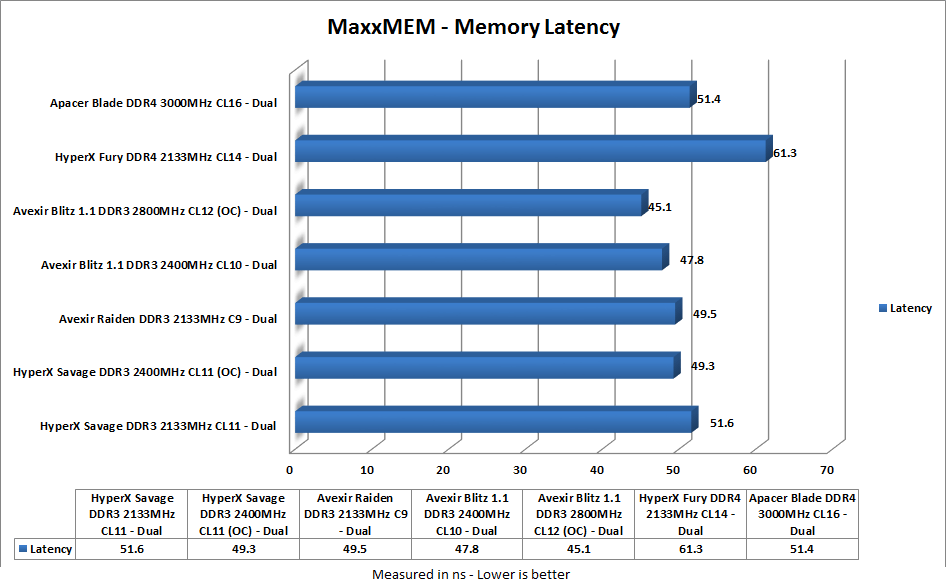 Whereas the latency goes, the Apacer Blade at CL16 was able to beat the HyperX Savage at CL11 by 0.2ns. 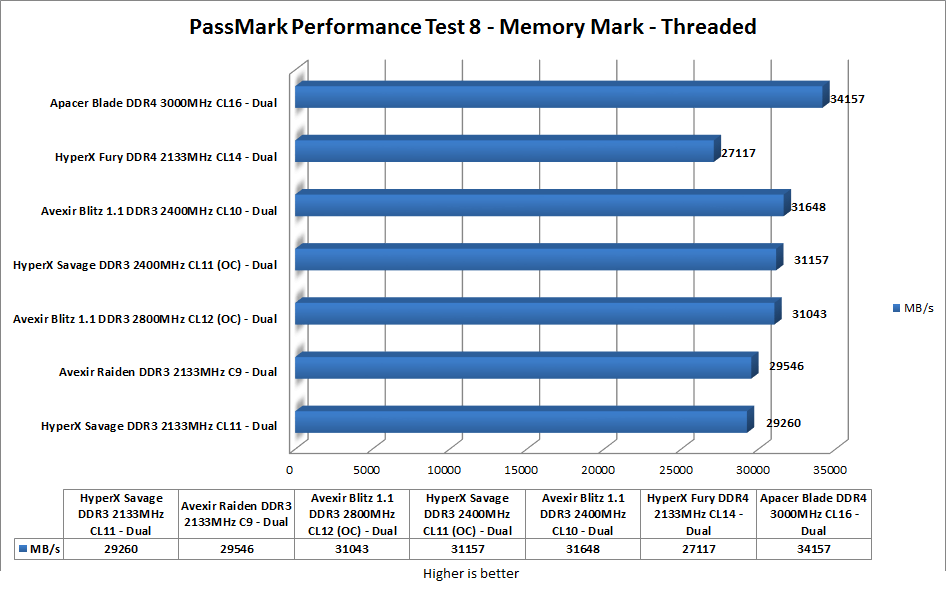 In PassMark PerformanceTest 8, we also see the Apacer Blade taking the lead with the 2nd position being 2,509 MB/s behind in the Memory Mark Threaded benchmark. 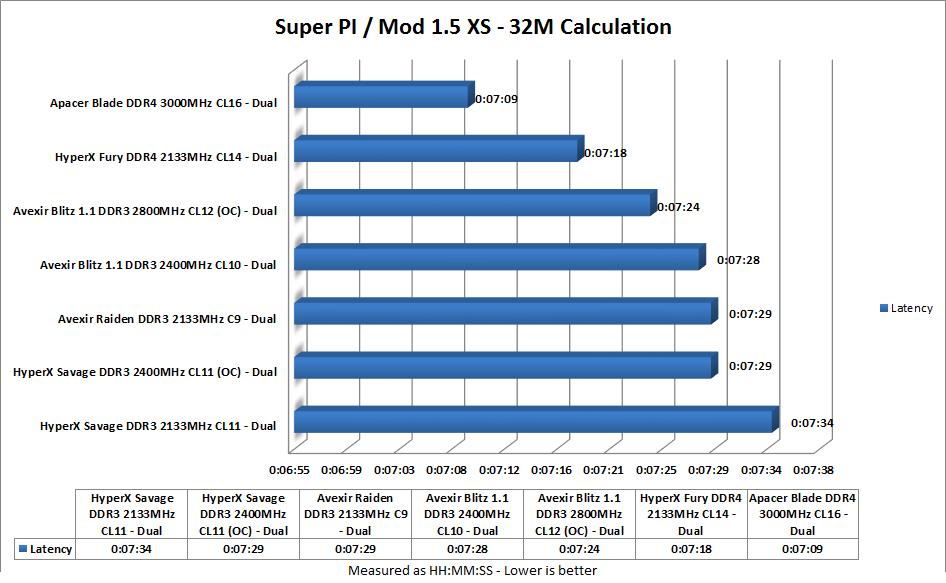 Super PI/Mode 1.5 XS is a software which generates the value of PI to a certain number of digits, and here, the Apacer Blade was able to produce the value of Pi just in 7 minutes and 9 seconds up to 2^32 digits. 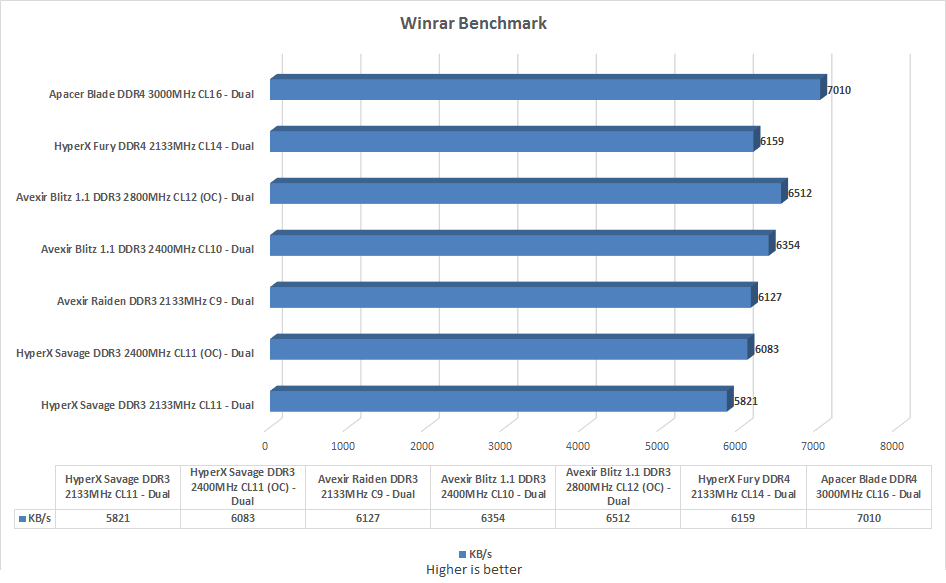 In Winrar’s benchmark, we see the Apacer Blade take the lead once again by almost 500KB/s. 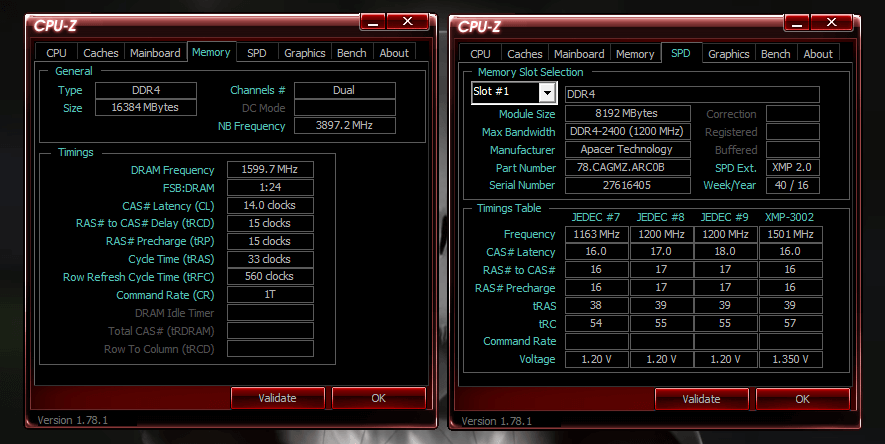 So after a few hours of tinkering with the voltage and timing and stress testing, I settled on the 3200MHz overclock at 1.37v on 14-15-15-33-1T. I wasn’t able to achieve a stable 3333MHz overclock on 1.4v with good timings and going beyond that can put your RAM life expectancy at risk. The 3333MHz might have been achieveable if I had the RAM on very loose timings but that would also mean higher latency, so I stopped at 3200MHz. The 200mhz increase in speed doesn’t seem much of an overclock, but with only 0.02 voltage increase, it seems good enough to me. You can still play around with the RAM if you want to go higher on the voltage and just might be able to achieve higher clocks at good timings. And if you think the Apacer Blade heat spreader isn’t good enough, you can also remove the heat spreader by unscrews the two screws on the RAM easily and install your own solution. 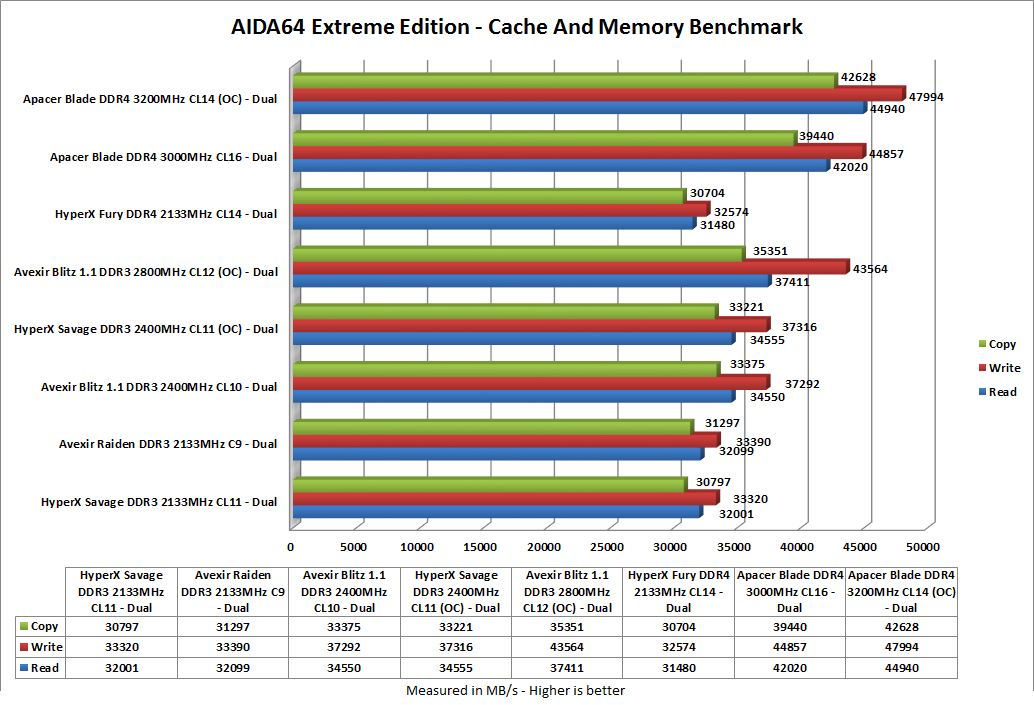 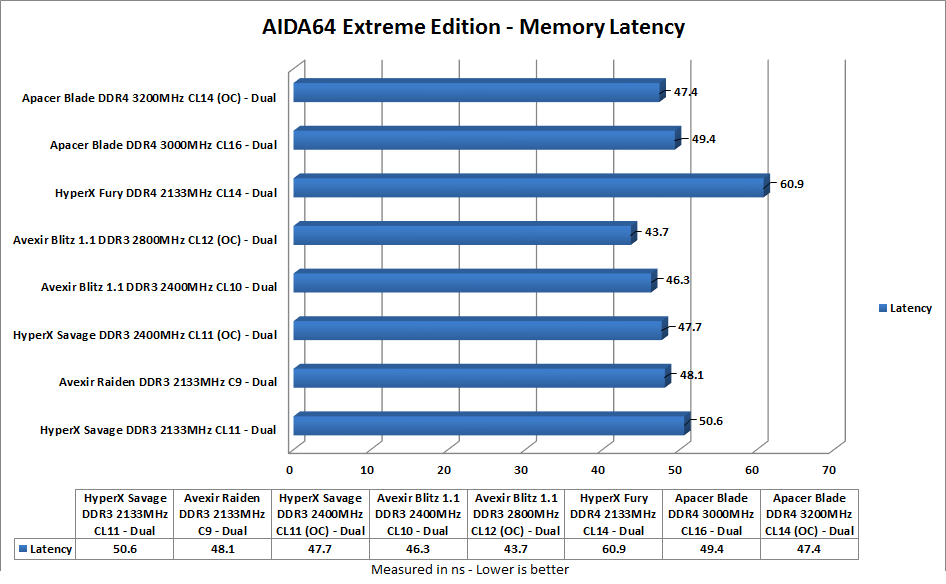 With just 200Mhz increase, we were able to see a significant performance increase on the Apacer Blade RAM. With the only 200MHz overclock, we were able to gain about 3000MB/s in all sectors while the tight CL14 timings have also improved the latency of RAM by 2ns over the stock speed. 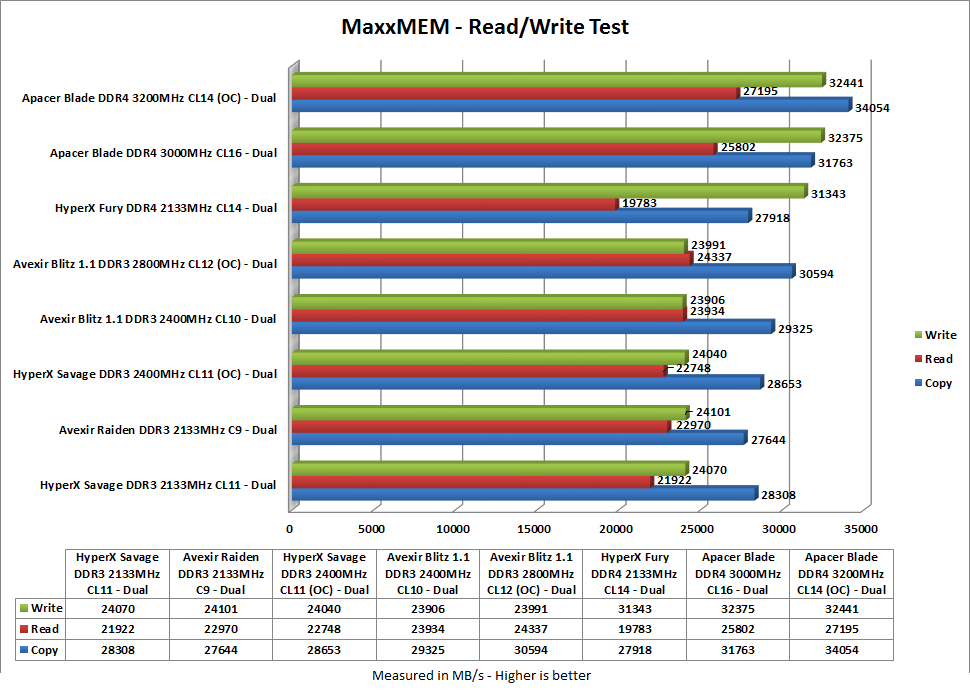 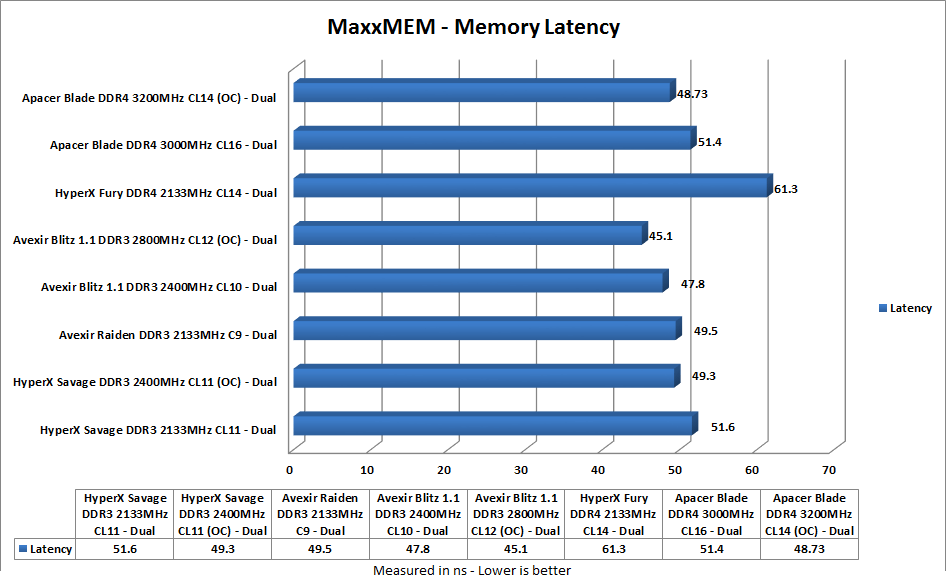 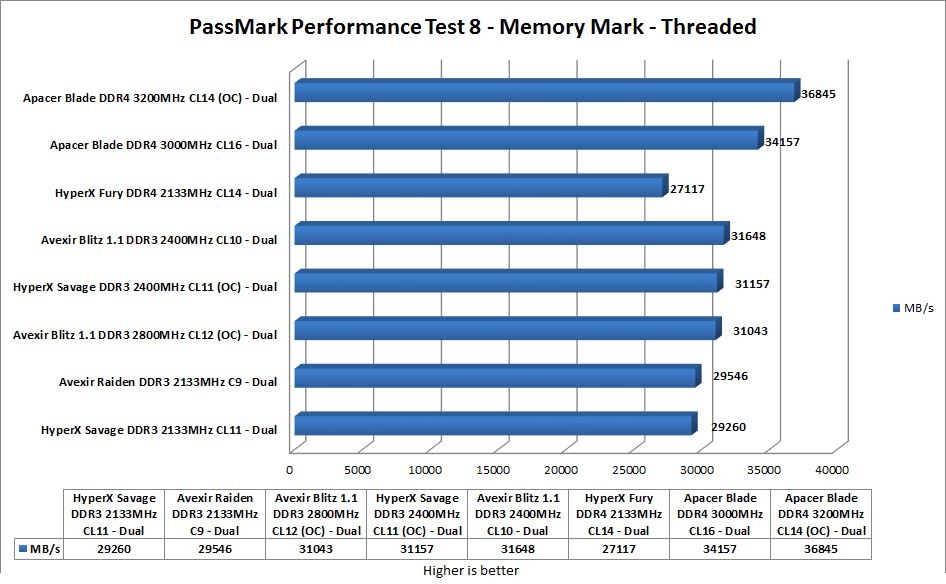 In the Memory Mark Threaded benchmark, we got about 2688 MB/s increase in the score which turns out to be a 5000MB/s lead over the second highest score other than the stock Apacer Blade. 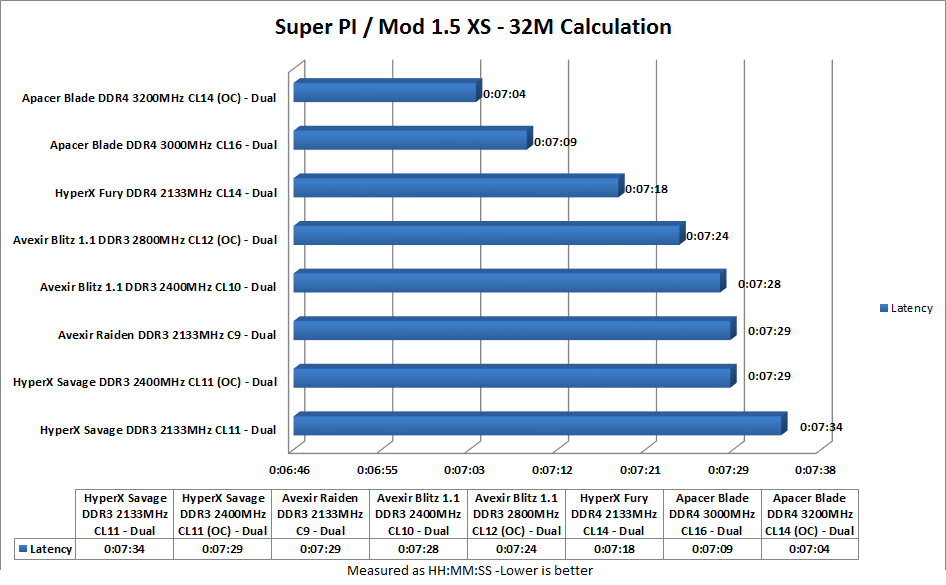 The overclocked Apacer Blade was able to calculate the value of Pi within 07:04 seconds which is an improvement of 5 seconds over the stock. 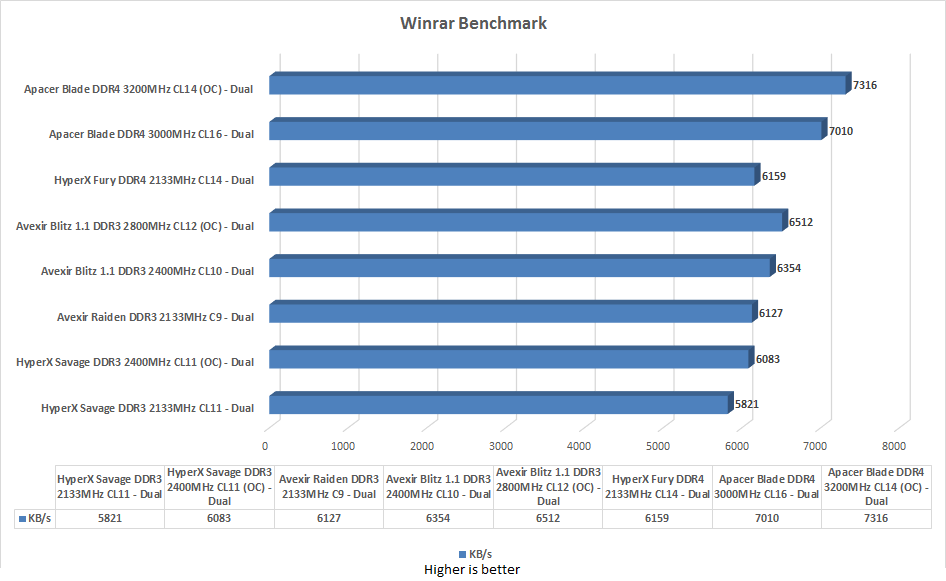 And finally, in the WinRAR benchmark, we were able to get a boost of 300KB/s over the stock speed of Apacer Blade.

DDR4 is the new standard of memory, which offers better performance and more capacity per stick along with low voltage as compared to DDR3 RAMs. And Apacer Blade DDR4 does just that, with remarkable performance while running at 3000MHz at 1.35v CL16.

The heat spreader also has a wonderful and aesthetically pleasing design and a red/black accent while there’s a metallic part attached to the either sides for finishing touch.

When it comes to overclocking, I wasn’t able to achieve some record-breaking result as it’s listed as overclocking memory on air with 1.4v. But I was able to overclock the RAM to 3200MHz just by increasing the voltage to 1.37v from 1.35v stock. But even with a 200MHz increase, there was some significant improvement in the benchmark results. And if you don’t want to overclock the RAM manually, Apacer Blade is also available in frequency up to 3600MHz at 1.35v.

The specific kit that we received for review isn’t available in US, well I didn’t came across any store that had the 3000MHz kit. But, the Apacer Blade 3600MHz kit is available on Newegg for about 149.99. And RAMs from other brands in similar frequency are also available in the same price range, if not a little higher. Specifically the 3600MHz kit, the Apacer Blade seems to be the cheapest option on the market right now. So if you’re looking for a cheap high frequency RAM, than I would definitely recommend you to give the Apacer Blade a shot. The only issue you might face is that the Apacer blade is a mid-profile ram, so it might not fit with some CPU coolers, but if you’re using water cooling, than you should be fine.

I would like to recommend the Apacer Blade DDR4 4.5 stars out of 5 stars and give it our 4.5 Editor’s Choice Award.