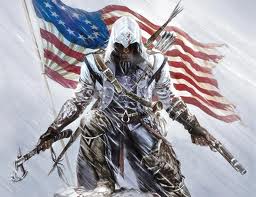 What is Assassins Creed 3?

Assassins Creed 3 puts the player in a time of war and battle as you face the American Revolution. You play as an assassin called Connor Kenway who fights for freedom and his nation. Players will fight along many famous characters in harsh and beautiful landscapes on an all new game engine, Anvil Next.

What is Anvil Next?

Anvil Next is Ubisoft’s genius Game engine which improves all aspects of AC3 but mainly the AI, Player modeling and Motion Animation. It also improves on Seasons, Weather and Time which allows for all new conditions to play out on your campaign. Since the engine uses  random time based events every player could experience differences, settlements may disappear and new ones may appear which creates a very custom adventure for everyone.

What is speacial about AC3?

The Weather. In AC3 the weather can change the whole battlefield. Players could be playing in different weathers which change different factors like line of sight and movement. This means that players will not get bored too easily and it can really freshen up the players game play perspective. Also the team behind it has incorporated factors from history right down to small details like the enemy’s reloading time and how they form a group.

Is the multiplayer returning?

Multiplayer is returning to the series and it brings over 12 modes to play. Modes like domination where players have to secure points on the map and also a brand new mode called wolf pack. In wolfpack groups of four people  hunt for npcs known as moles. In the mode players use stealth techniques to bring there mole down with style over a total of 25 sequences with the next sequence becoming harder and harder.

Are there any other editions of the game?