Today for review we’ve got something that everyone loves to have or uses daily if they’re a music lover. Yup, we’ve got a speaker review this time and no it’s not like those Bluetooth/USB powered speakers that we usually do, it’s an AC powered speaker/subwoofer. I have been holding myself back from buying a low powered/local product and went for something that’s got some awesome bass, but something like that won’t really fit my budget so I picked up the Audionic Maxcool 2.1 speaker.

Audionic is a Pakistan based company, that’s found in every corner of the country and has made themselves a solid pick cause of their low price tag and great quality.

Below are the specifications of the product that we’re reviewing:

Starting in the traditional way with unboxing, on the front of the box we have the picture of the set itself in middle, then there’s the Audionic logo on the top left. On the bottom we have some features listed, like Bluetooth/USB/SD card supported, comes with a remote control and have FM radio. 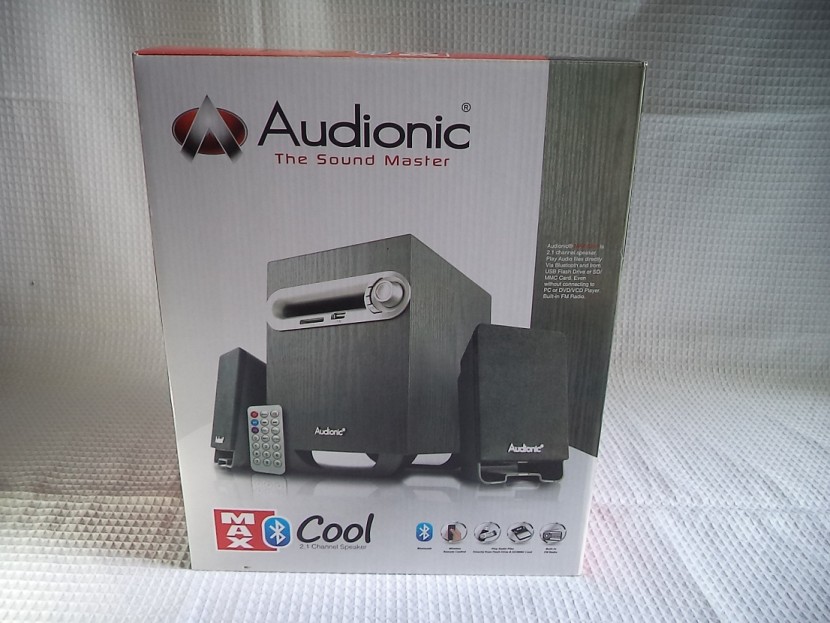 On the right side of the box, we have a description of the product in between, then some features and specifications in different languages. We can also see that the product comes with 1 year warranty. At the bottom we have a few awards listed that has been achieved by the brand. 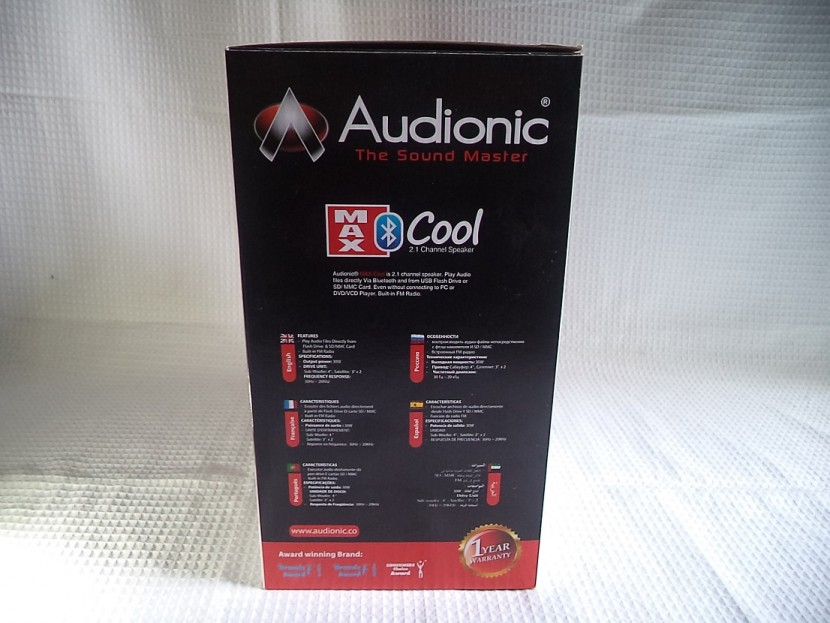 The back of the box is almost similar to that of the front or maybe this is the front and the previous on was back, in any case, both sides are almost identical but this side have a sticker claiming that it’s a genuine product. 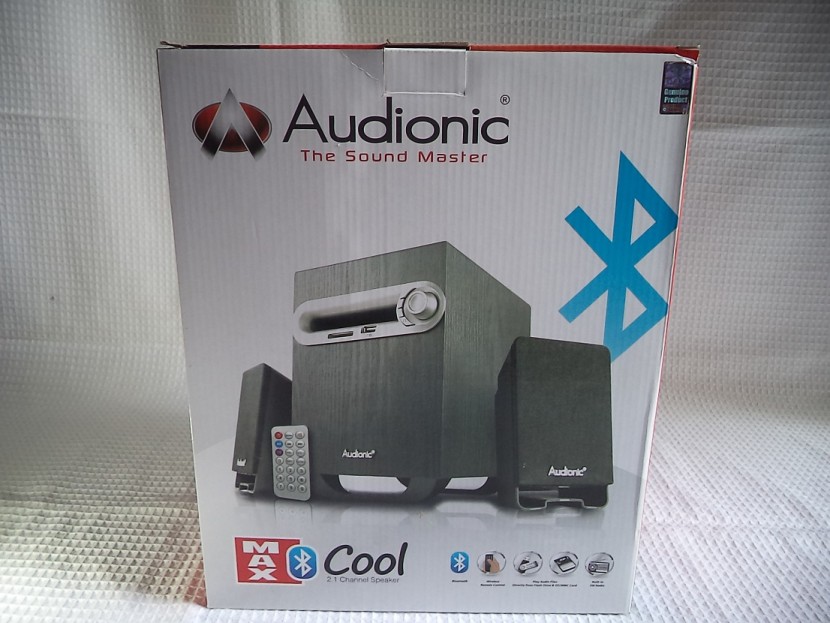 On the right side of box, once again we have the logo and picture of the product, then some detailed features and support list like Bluetooth, SD card, USB drive etc. 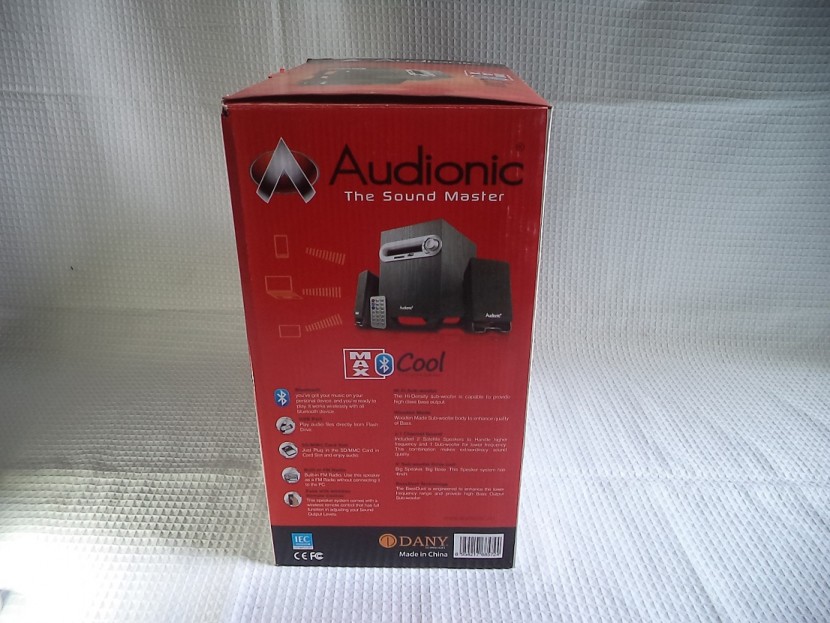 The box opens from the top and as you open it up, both the satellite speakers are present in a Styrofoam container along with the remote and AUX cable. The Aux cable isn’t really that long in length so you’re not going to take it far away from your PC or whatever you’re going to use as input, unless it’s over Bluetooth connection (and that depends on range). The satellite speakers are completely black with just the Audionic logo on front bottom. 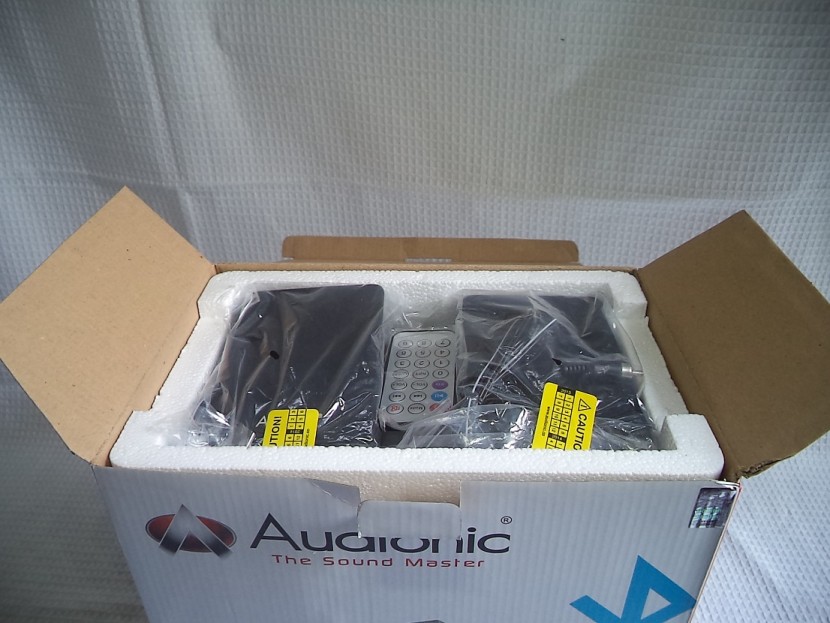 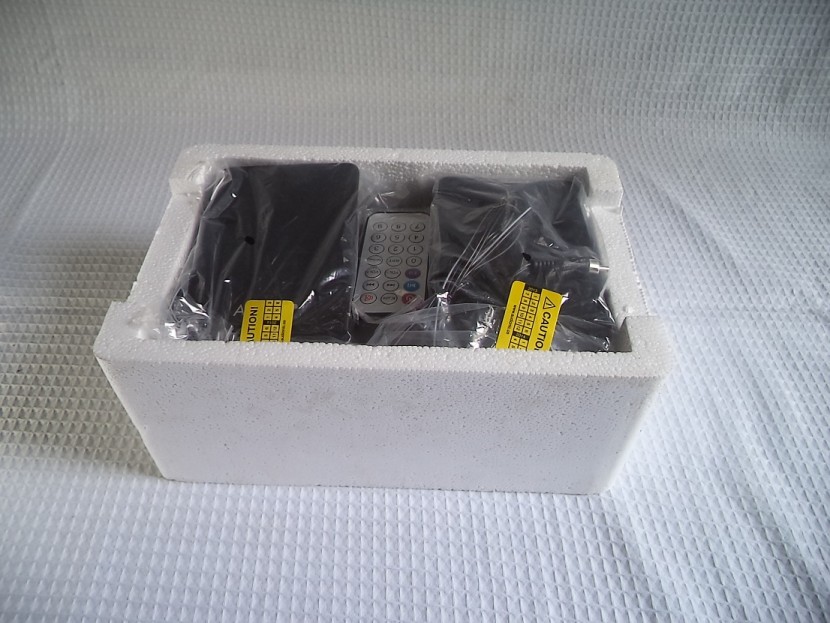 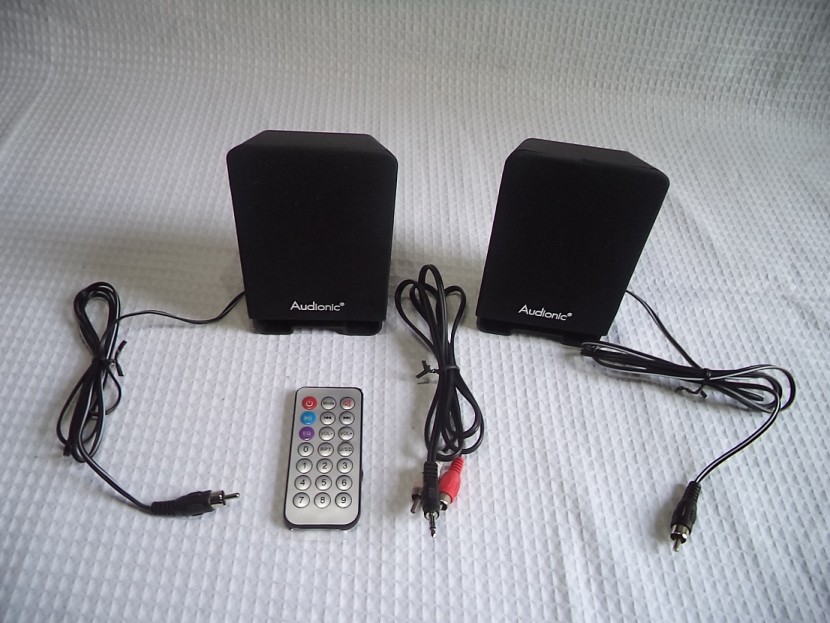 The remote in my opinion is of very cheap quality. Even as the battery was new, the remote was very unresponsive, also it’s a one way remote, that means you can only use the remote when you’re in front of the speaker, it won’t work if you’re using the remote from behind the speaker or left/right. One more thing that saddens me is that the product didn’t come with any kind of manual, and here I still don’t know what those numbers buttons are for, have tried on USB, Bluetooth connections and PC without any noticeable change. Also to increase or decrease the volume you have to press the button simultaneously, just pressing the button for a long while will only lower the volume by 1 level. They should totally look into coming up with a better quality remote. Fortunately you have the volume controller, mode and next/previous/pause button on the subwoofer itself, that’s a life savior. 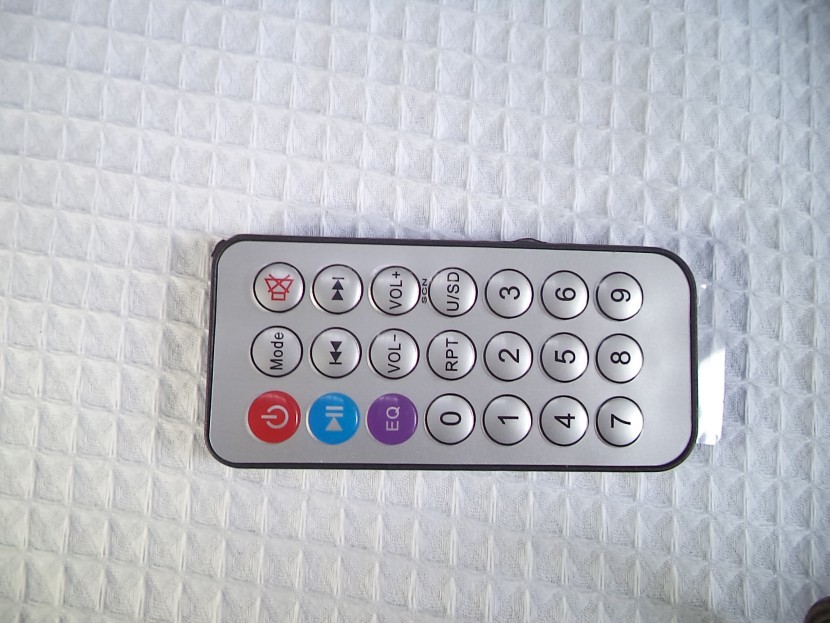 Once the Styrofoam container has been removed, the real deal for which I bought this product was hiding underneath it, cover with plastic like the satellite speakers. The subwoofer itself was placed over a Styrofoam to prevent it from shipping damage. So far the packaging looks good. The body is made up of wood, and has some scratches all over it, and that’s not the scratches from damage, it’s actually for looks if you’d say. 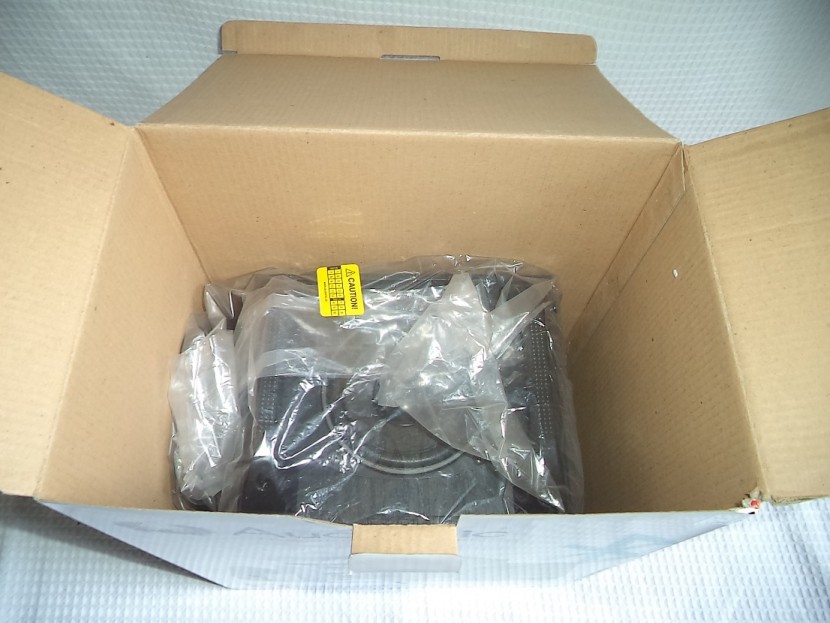 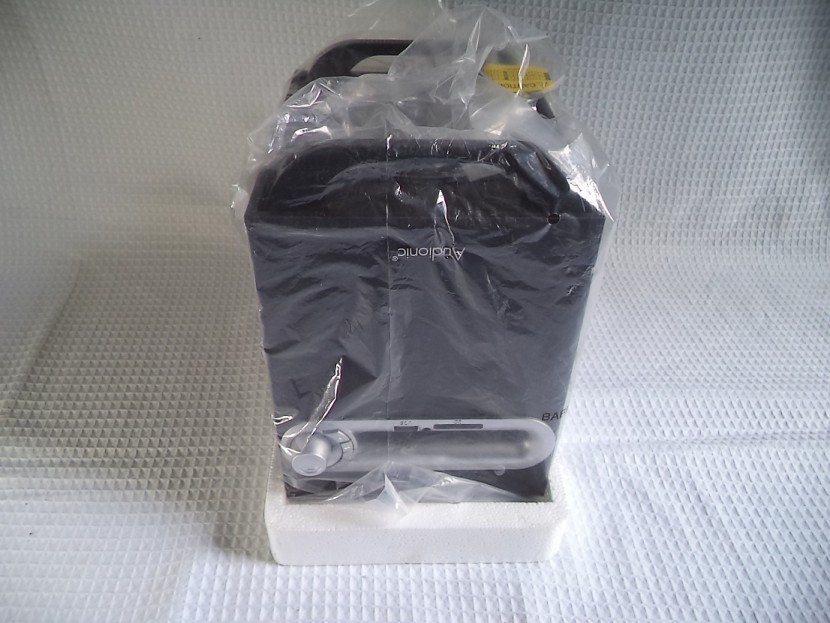 And as mentioned above, we can see the mode, next/previous and pause button on the front of the subwoofer along with a circular volume controller. Just beside them are the USB port and SD card port. Then there’s the whole from where the air release as the bass drops. 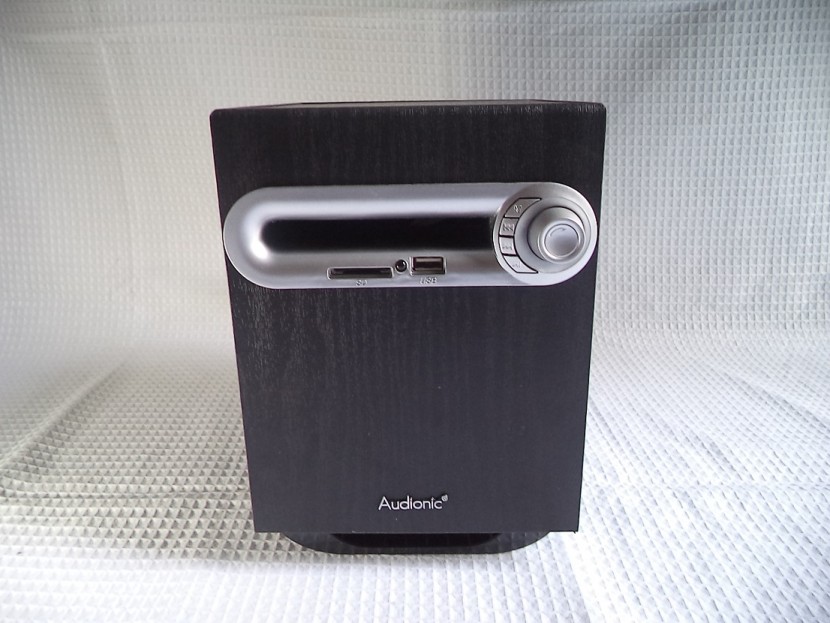 On the back we have quiet some mess here. We have the output and input ports just beside each other, then there’s the power on/off button underneath the bass controller. And underneath that is the AC/power cable that’s long enough that you can place your whole system between the outlet and speaker. Thanks to Audionic for not providing a manual with the product, I’m still not sure what what that ANT wire is for, so I’ve left it hanging like that. Once again, we have the Genuine product sticker on back as well. 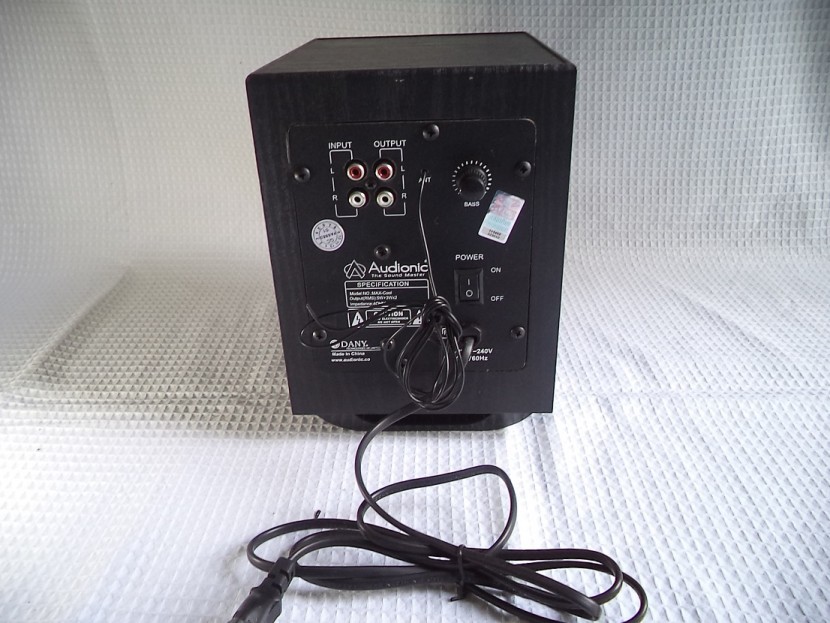 Where’s the front of subwoofer drive you ask? Well its present at the bottom of the whole wooden body. I’m not sure who and why did they come up with the idea of pointing it downwards (might help in spreading bass), but in my opinion that’s an uncomfortable place for that. One can easily damage the soft papar while handling the subwoofer if they’re not careful, so make sure to check what’s underneath before placing the subwoofer anywhere. 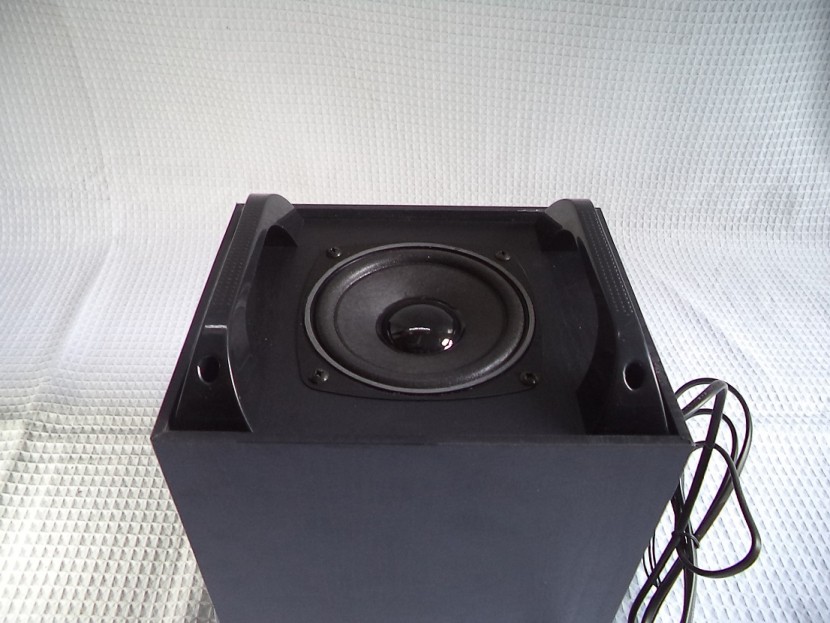 Just some random pictures of the subwoofer with satellite speaker and it’s remote. 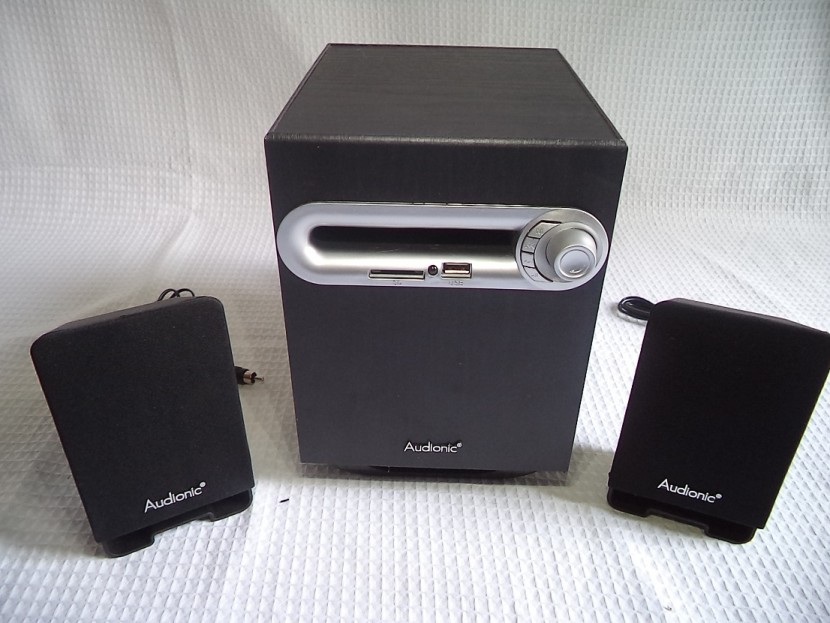 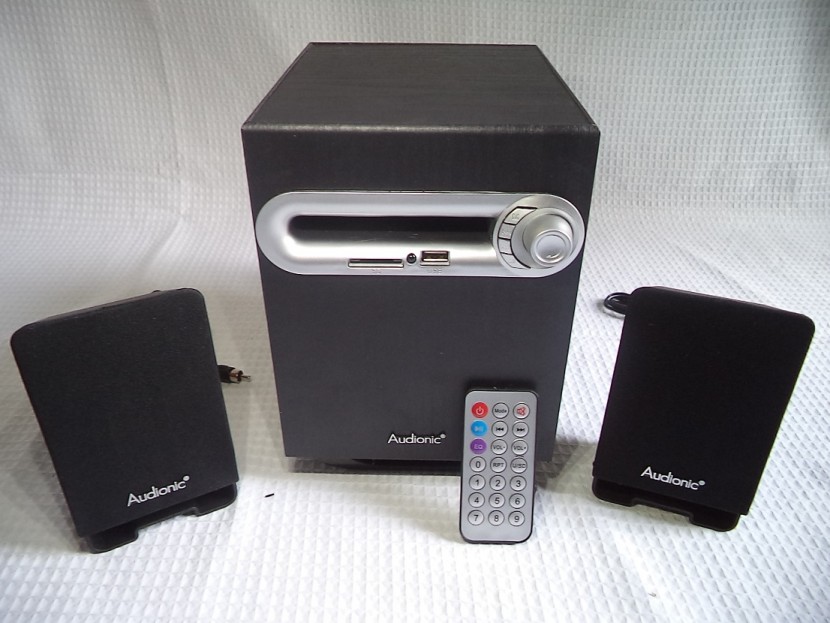 In case you were wondering what to do with the AUX cable, what goes where, let me make that clear for you since there’s no manual for that. The satellite speaker cables go into the Output port, where L means Left speaker and R means right speaker. The white and red parts of the AUX cables goes into the Input ports with the matching colors, while the black part of the cables goes into the headphone/speaker port of your motherboard, it would either be green or blue in color. 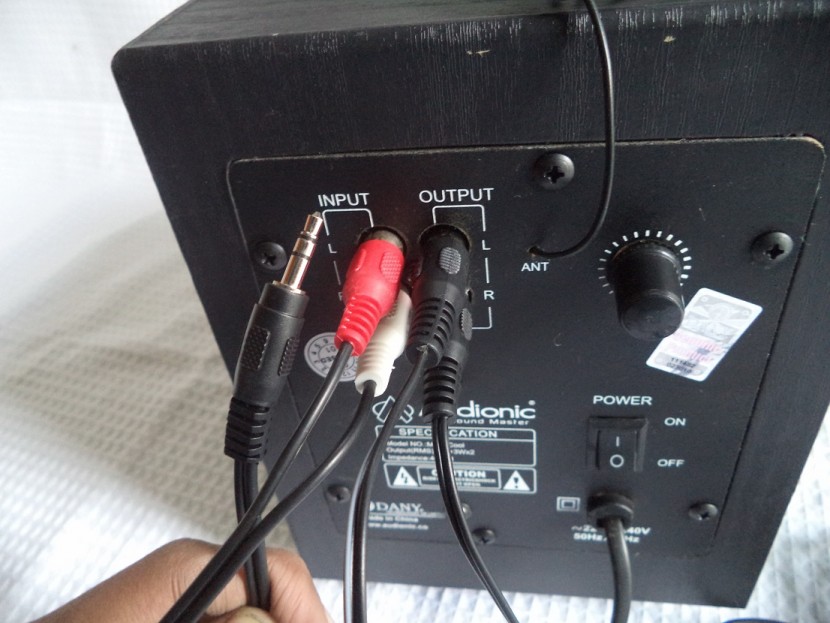 To start the FM radio we just had to switch the mode from Audio to FM Thunder and press the SCN/U/SD button on the remote to search for the available channels. I don’t really listen to FM so it wasn’t really a concern for me, but there were almost all the local FM channels available on speaker that’s usually available on FM radio. The quality wasn’t that bad, but the signals were a bit weak, there was some stuttering in sound throughout the channels. Also the placement of the speaker was a big factor in that.

Bluetooth was one major factor for me that lead to the purchasing of this product, there was a similar model available in same price, but without Bluetooth so I had to go with this one of course. There was no problem at all in connecting mobile devices with the speaker through Bluetooth connection. Though I was unable to confirm the connection with a laptop through Bluetooth cause I didn’t have any at hand, and there are times when Windows just don’t want to work with such devices on laptops via Bluetooth connection.

I was on the verge of pulling out my hairs here, cause unfortunately the product doesn’t comes with a manual and the songs I had in my USB drive won’t play. I’ve pressed all the buttons after inserting the USB drive, but it just won’t work. I tried two other USBs as well, but still it was unfruitful. It’s not like the company lied about USB support, but it’s the USB format that was making it unplayable. Thanks to a friend of mine who has gone through the same trouble with one of Audionic’s speaker as well I came to realize that the speaker doesn’t support USB drives/SD cards that’s running on NTFS format, you have to have the USB formatted in FAT32 format to make it work. And since the speaker doesn’t come with any kind of LED screen, you won’t know what you’re playing until the song starts.

First I need to make it clear that this was purchased for listening songs and not for games, cause personally I use headphones for games and can’t even think of playing games with a speaker, but that’s just me. The sound is just perfect as it should be, no stutters or breaking whatsoever. Personally I didn’t find many opportunities to take the volume to max, cause of the kind of music I listen to and the house being only as large as two rooms, but when I did find the opportunity, I took it to the max and still there was no negative change in pitch or sound. Talking about the bass as that was the main purpose of purchasing it, it’s not really that deep or loud. You won’t really feel the bass or the vibrations/waves it creates if you’re far from it, even on the max I couldn’t feel the bass in just the next room, though the sound was easily heard. I think I was expecting much more in the bass sector because mainly I only listen to electronic music and it was a let down there. Just to make sure it was the subwoofer itself and not the sound quality, I listened to some bass boosted tracks and nop, the volume of bass did increase but not the waves/vibrating feeling.

And if you live in a small house like mine, you won’t really feel the need to go max on the volume to listen the music throughout the house.

Overall I’m pretty much satisfied with the product, but if it had better and louder bass, that would’ve been awesome, or maybe I’m just expecting too much from a product that costs me only around $25. I could’ve saved myself alot of time and trouble it the product came with a manual also and because of the cheap build quality of the remote, it’s just laying around with no use in my house now. Would’ve given it a 4.5 stars if it had the manual and good quality remote.

BTW, I saw that Audionic makes a pair of headphone that are available on Amazon for under $14 and I would probably like to review these next!