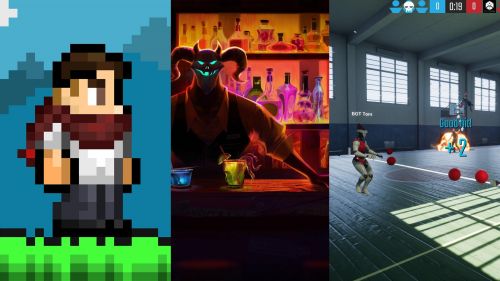 The universe of indie games is overflowing with titles. Thanks to the “compassionate” Steam, 7.6 thousand titles were published in 2018. This compilation is made to set you free from dismantling the debris – you will fall in love with at least one of these top-3 indie games though we didn’t limit our favorite list to just 2018 published titles.

Dodgeball – We All Did It At School

This simple time killer is a great exercise for your concentration and reaction speed. In both single-player and multiplayer modes of Dodgeball, you have to throw red balls to defeat your opponents. You can either do it or skip a turn to use the ball for blocking attacks. You can also evade to stay alive or dare to catch a flying ball. If you catch it, pass it to the nearest teammate to give a chance to your team to stay competitive. Some of the balls have other colors and perform special actions. For example, the exploding ball provides a good option for repelling enemy throws.

To have more fun in Dodgeball, go to the multiplayer mode. You can invite one or many of your friends or colleagues. This mode is incredible entertainment for friendly matches. We played it in the IndieGames.Download office. It’s a really effective method for teambuilding! Players can master uncomplicated controls in a couple of minutes. There are only 4 actions – throw, fake throw, slide, jump, and sprint — an easy way to blow off steam.

Terraria – Did It Better Than Minecraft

Back in 2011, gamers and critics stigmatized this game as a 2D Minecraft clone. Well, It actually is. However, for some reasons, it is still extremely popular among adult gamers all over the world, while Minecraft drags out a miserable existence of a mediocre online sandbox for 9-years-old.

Unlike Minecraft, Terraria is oriented on the single-player mode. You have to create a character by choosing out of several skin tones, clothes, hats, haircuts, and boots. After that, you are spawned in a procedurally-generated world with forests, dunes and snow peaks. The most exciting activity is to explore the underground world.

The whole underground is riddled with caves and tunnels. Only there you can find better materials for crafting to upgrade your ammunition and face dangerous creatures without the fear of immediate death. IndieGames.Download recommends this survival RPG to all fans of the genre.

Afterparty – Drink Till You Drop

Have you ever tried to overdrink devil and his henchmen? Perhaps you haven’t, but the number 3 of our top is a real portal to the drunk hell! In the game, you can experience playing for two ordinary party lovers who accidentally die and awake in hell. Fortunately, the place appears to be not as awful as they used to imagine. Hell is rather boring, so all the scary monsters are avid drinkers.

Your mission is to travel across hell and visit bars, where you face various drinking demons who would love to challenge you. The gameplay consists of fun quests and long walks between bars. Everything looks rather monotonous, but loads of black humor and swearing turn it into a real drunk party.

The world of indie games is an iceberg, and these three games are just the top of it. Explore them to figure out what you like the most and go deeper to find more. There are hundreds of good franchises for all gaming consoles.