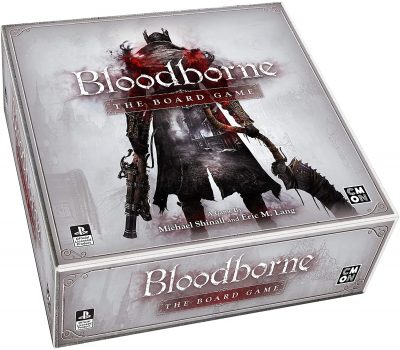 In Bloodborne: The Board Game, players take on the role of Hunters. They will fight together to uncover the hidden mysteries of Yharnam city and beyond. With unique trick weapons, each with different forms and powers, Hunters must quickly think and adjust their tactics. They have to overcome the multitude of enemies that stand in their way. Learn its behavior, exploit its weakness and defeat it! Featuring unique card-based combat, with few luck – success or failure depends on your choices and how you approach each time!

Of course, in the face of such terrible enemies, death is a common occurrence. Don’t worry because death is never-ending for a Hunter. Those who fall into battle will awaken in the hunter’s dream, ready to return to the battle. However, be warned that upon awakening you may find your former enemies and obstacles return. Worse yet, time is not on your side as the Blood Moon rises higher and higher in the sky, spread its frenzy throughout Yharnam. You must press forward repeatedly if you and your teammates hope to complete the Hunt before the city meets an unfortunate end.

– Cardboard paper many, don’t like blood token, survivor, chest, …. should replace with your other token or plastic token.

– The game for the card box is very nice and tidy, can hold all tokens and cards, but can’t hold the cards when sleeved. 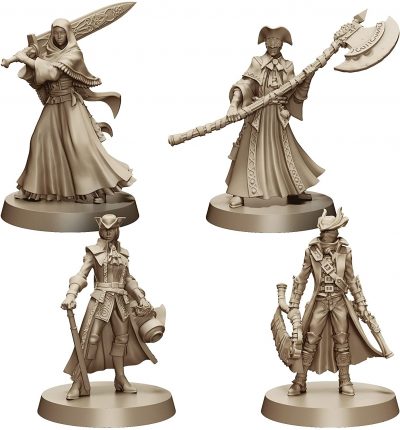 – HUNTER TURN: there are 3 cards to play, each action (attack, run 2 cells, change weapons, hunter dream, react to areas like opening chests, talking to NPC,…) all need to discard 1 card from hand. For attack only, you need to hit the slot on the weapon (also only when attacking or dodging, the card effect occurs, or some active cards when discarding, in addition, discard has no effect) => the more hit you do, the more you will spend. It will make you run out of cells from attacking.

– MONSTER TURN : activate after EVERY hunter runs out of turn, move closer to 1 square and attack. During the hunter’s turn, only chase the hunter, not hit.

– COMBAT TURN : occurs when the hunter fights a monster or a monster hits the hunter. The mechanism of not needing to roll the dice is quite good. Players perform the following steps:

1/ They can put the card in the slot to PLAN TO ATTACK. (this box will show how much damage is attack at fast, medium or slow speed)
2/ Flip the monster’s action card. (will indicate if the monster hits basic, special, or uses skills)
3/ Dodge. (Put a card with the keyword DODGE in an attack box with a speed greater than or equal to the monster’s attack to dodge all attacks)
4/ Handle the attack, whoever hits first will hit, if there is an effect, then blink…..

– EFFECT ROUND: some special points on the round cause the map to be reset (monsters reappear, monsters on the table are removed, boss full health, some quests have their progress reset…) 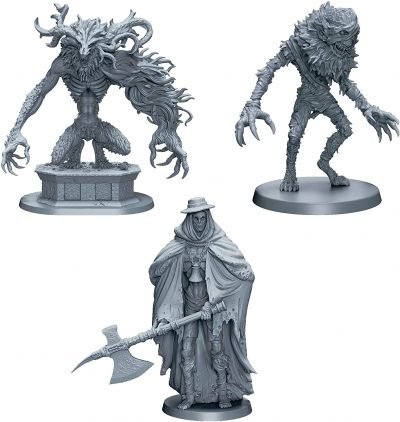 + Good campaign. There are many options and stories to replay to discover even though the game is completed.

+ Even though there is no connection between each campaigns, it gives you information about the whole Bloodborne universe to explore.

+ Boss, monster, hunter, mission: all have the same level of discomfort, but not impossible, need a lot of tactics with handling skills.

+ The risk is quite low in the game, you lose due to lack of vision, also known in the game as insight (mind eye – alluding to knowledge), careful calculation.

+ Monsters and bosses are very diverse in attack, range from 5-6 reactions.

+ There are a lot of freedom in Deck-buildings. You can build and adjust your deck to match your style

+ The content in the base set is already a lot.

+ The rule is easy to learn, not too complicated, not too many edge cases.

+ Unique monsters, each reacts differently. Although the boss is the same, the campaign is also unique.

+ Gameplay has good quest progression. You can read information and make decisions that lead to a different direction.

+ Without the hunter expansion, it is quite difficult when there are only 4 hunters in the base, quite a few fighting style options.

+ The back of the card and map, and the card box dont have consistent styles.

+ The rule is written in the style “for those of you who have played Bloodborne, it’s easy to understand, but those who haven’t, try to understand”, read each word carefully, it’s not always wrong.

+ The game is quite punishing for mistakes. If you play it wrong too much and cause the hunter to die, 16 rounds it only happens in 30 minutes. If you go to a campaign and lose, you have to start over from the beginning like at the beginning of the game.

+ Many unknown things happen, you are blind about the mission, boss skills, screen information…….. at first play. 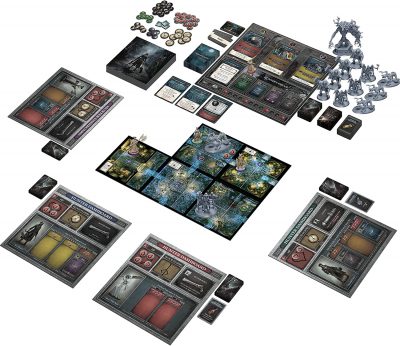 + Buy expansion, it’s worth it, because it can be combined.

+ Playing with people who like to coop is better than competitors, in the game there are many missions, so there is a high chance that hunters will split into 1 each, but the task is quite good, sometimes you need to howl other hunters to help you, it may be better Save time, missions have combos together.

Should not try this:

+ Don’t joke around too much in the game. If you lose attention, you will lose the game.
+ Don’t play solo, since it is too easy.
+ Don’t play chalice mode and PVP mode. Chalice is difficult for newbies, PVP is broken, need house rule or producer to update rule.

– In addition to the very frustrating card and map backs, and pvp rules, everything else is great. Basically I like unfair and hard games to solo. I aim for this game because of the plot and fighting without dice and monsters with diverse bosses. But if it is true, all the content in the game supports playing more than 1 person, a lot of fun with many people. Currently, my team plays continuously for a whole month to open camps, switch scenes, explore monsters and bosses without finishing the base. It is quite complicated and difficult when losing and resetting the game.

– If you like the mechanics like opening the map, building characters, dealing damage with cards, doing quests, feeling the story, fighting monsters and bosses quite well, this is the game for you.

You can buy this game on Amazon at this link.