My car is a 2008 model that doesn’t have Bluetooth functionality built in like my wife’s newer 2014 model car.  I see how effortless it is for her to answer her phone, make calls and listen to her Spotify music on her car audio system by having her iPhone instantly pair with her car the moment she starts it and I must admit, I wanted that functionality for my own car as well because even though I own a half dozen Bluetooth earbuds and headsets, having nothing on your ears and hearing through your car speaker while using a centralized mic is just easier. 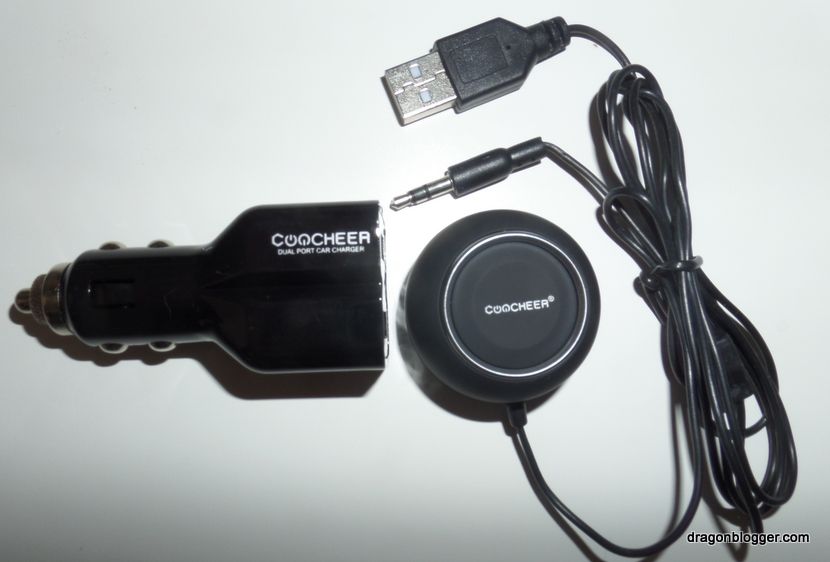 This is where the Coocheer Bluetooth Wireless Car Kit comes in, and I have two different products from Coocheer I will be reviewing, this one is for the Bluetooth Car Kit which plugs into your car audio system via an AUX jack.  If your car does not have an AUX input jack, then you will likely have to use their other product which is the Coocheer Bluetooth FM Radio Transmitter which uses FM signal to override an empty radio station to send your audio to your car speakers, see that review in the near future. 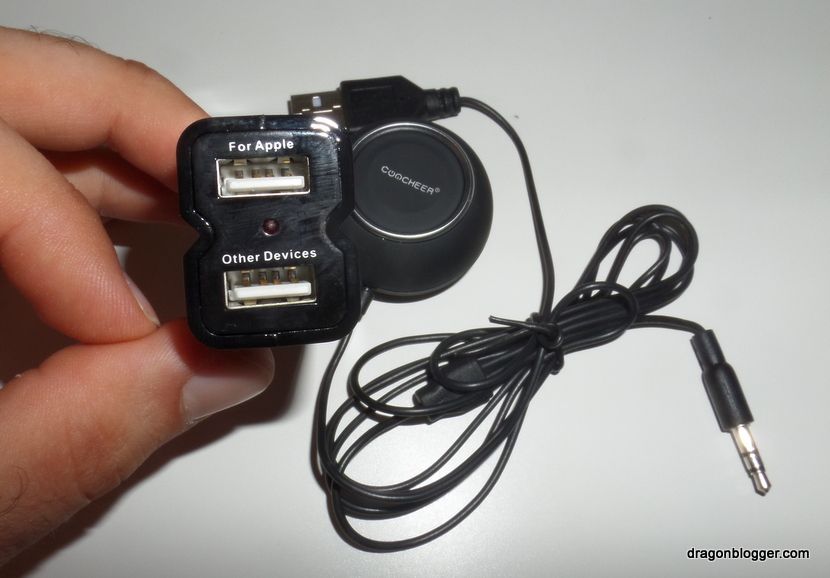 Back to the Coocheer Bluetooth Wireless Car Kit which relies on the AUX input.  The product is dead simple to use, you plug the included USB Charger into an outlet port, plug the Bluetooth Adapter Kit into your AUX input then pair the adapter kit with your mobile phone (iPhone or Android).

Now, the 2 Port USB charger has an Apple and Android (other) specific ports, but you can plug the Bluetooth Adapter into whichever port isn’t being used to charge your phone.  There was only one real issue that I ran into and this is a problem with the configuration of my car not a particular fault with the Coocheer Bluetooth Hands-Free Car Kit.  In my car, the AUX input jack is actually in the glove box, which means you have to plug the AUX cable into the open glove box, yet the USB cable has to plug into the Car Adapter which is in the center console between the driver and front passenger car seats.

The included cable simply didn’t have enough length between the AUX adapter part and the USB charger part, they can’t separate out far enough to reach both ports, so I had to use a USB extender cable to reach the charger, so for the purpose of the review I did that.  Note, if your car has the AUX port in the center panel of the car or close to the charging port, then you won’t have a cable reach issue.  I do find it rather obnoxious that my cart had the AUX port in the glove box only accessible with Glove Box open, this to me was an issue, it mean’t I had to drive with my glove box open to use the car adapter, since the plug to go into the power had to be in the center of my car.  I couldn’t even tuck away the control box in the Glove due to it requiring to be powered and this left me realizing that for my particular car model, the Coocheer Bluetooth FM Radio Transmitter was a better product option for me, though I loved this product much more and if you have an AUX port in the center panel of your car or not in the Glove box, then you shouldn’t have the issue that I had.

On to testing, something to know about the Coocheer Bluetooth Car Kit is the centralized control button also can rotate for functions too, you don’t know until you stick it to your dashboard and actually start using it.  After pairing your device, the rotation to left will go to previous track if you do a quick turn left and release, or a skip to next track if you quick turn to the right and release.  If you hold instead of releasing when turning it instead triggers to increase (turn right) or decrease (turn left) volume.  The Multi Function button will pause, answer call, hang up call and be used for pairing the Bluetooth Adapter. 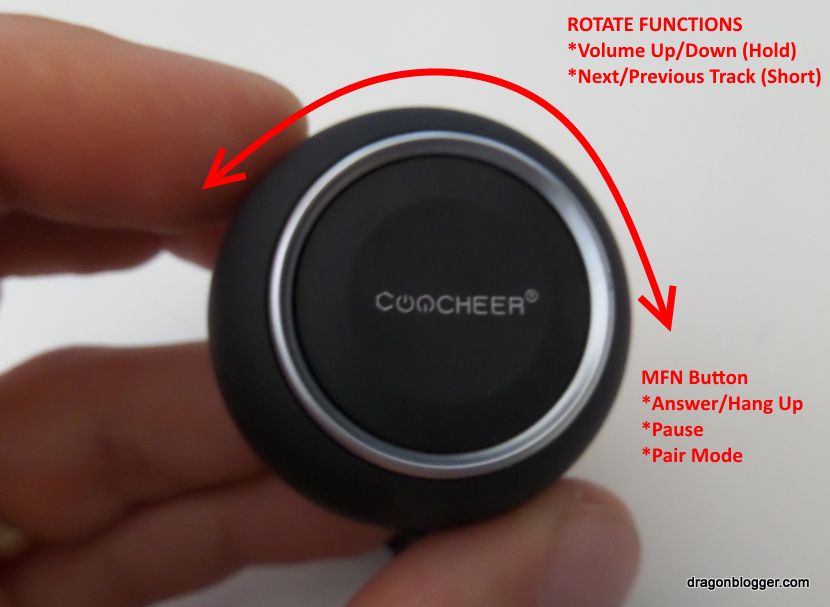 The Bluetooth connection was fine, and in fact I even tested that you can pair 2 separate Bluetooth devices with the Coocher Hands-Free Bluetooth Car Kit, and it will remember the two paired devices automatically connecting to the one it can find that it remembers.  If you have both devices in the car at the same time, it just latches onto one of the 2 randomly whichever can answer and pair first.  So if you and your partner both have iPhones or Android phones paired with it, then one of you needs to have Bluetooth turned off when you get in the car or risk it pairing with the wrong phone if you paired to more than one.  Audio was crisp and clear and delivered fine, no issues and it sounded as good as the Sirius XM Radio coming through my speakers.    This was a very decent product for adding Bluetooth Hands-Free calling as well as music to a car that doesn’t have Bluetooth but I would recommend you make sure your AUX port is in your center console close to your charging port.

Again, as mentioned if your AUX input is too far from your car charging port, or not easily accessible or your car doesn’t have one, then I recommend you look at the Coocheer Bluetooth FM Radio Transmitter instead.