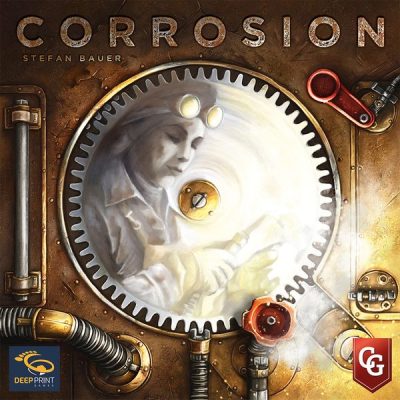 Smiling, you stand in the center of your factory: the sweet sounds of metal clattering and engines rattling are warming your entrepreneurial heart. Your goal is to build diversified scoring and production engines in order to outrival the other factory owners. However, in the steam-filled air, your biggest enemy is time, because most machines and gears rust away quickly. So you are well advised to also produce rustproof chrome gears and invest in powerful chrome machines.

How to operate your own factory

– Players will manage a four section factory. Each section will have One-shot machine and Turning Machine installation slots. In addition, players will have 1 prototype engine with 3 different chrome machine models: semicircular head, cog head and antenna head. Next to the engine is the steam boiler.

– The factory has a total of 4 sections, which have number from 1 to 4 clockwise. Sector 4 is also known as Sector X. Whenever a player buys a One-shot machine, or Turning machine, players will place them into area 3. All players will start with 6 cards of the same action. together.

– The remaining action is rotating the Corrosion Wheel. Players will rotate this wheel by 90 degree. Then, they will activate all the Turning Machine in their factory.  In addition, if sector X moves to an area with a one-shot machine,  players will activate the One-Shot machine as well.. True to its name, players can only activate it once. The turning machines were also used about 3 times before being liquidated.

– When the game end condition begins, each player has a maximum of 3 turns. Each turn will cost the player a certain number of points: 1 point for the first turn, 2 points for the second turn, and 3 points for the last turn. Players can skip these extra turns if they want. 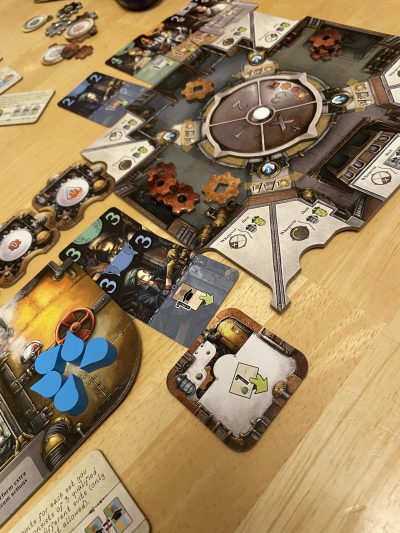 – The game has a lot of very unique and creative ideas. One-time machine acts as a one-time use power. The turning machine acts as a complement to the act of rotating the disc. To avoid abusing the machine, the author has assigned usage ratings to these machines. In addition, the game requires the player to carefully calculate when the end-game condition is activated.

– The game is engine-building in the literal and figurative sense. With the player’s initial engine very sketchy, the player will see a difference in his engine in the late game.

– Corrosion requires players to calculate extremely carefully. Players can only own the function of 1 chrome machine of each type. This means up to 3 extra power from Chrome Machine. This helps the game have a lot more interesting combos.

– Although the Follow mechanism is added, the game feels like Multiplayer Solitaire. Each player plays with his own machine. The main interaction of the game lies in competing for Achievements – to receive points in the game

– The game has up to 3 different engines: one-shot, turning and Chrome Machine. But really, the whole game, players are only strong when they focus on building the chrome machine. Chrome Machine gives points. Also, they gives non-expiring powers. On top of that, they speed up the game ending condition. The remaining two machines are too weak compared to Chrome Machine.

– The start of the game is extremely slow. Players don’t see many progressions until near mid game.

You can purchase Corrosion at this link 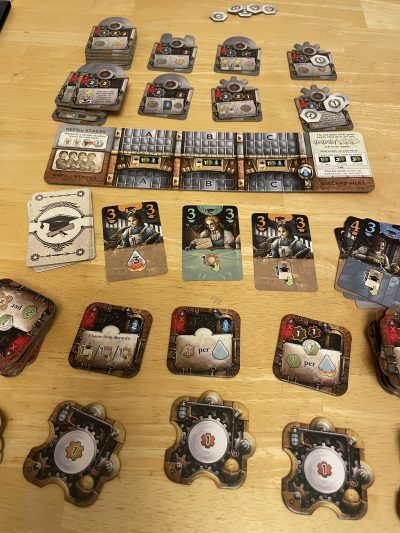