This post contains spoilers from the episode, it is recommended that you have watched Heroes Redemption Episode 11 before reading.Â  If you don’t mind finding out what happened in the episode, then by all means read away and I welcome all comments and opinions about the show and the episode.

Heroes Season 4 Episode 11 – Thanksgiving was appropriate in the fact that it focused on the various families gathering and all of them having some sort of revelation. As I predicted Noah met with Lauren in the present and it looks like some sort of relationship will be pursued that started but never went anywhere in the past when he was with Saundra. 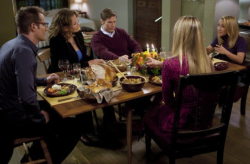 The highlight of the Thanksgiving dinner scene with the Bennett family was when Claire slit her wrist and forearm right in front of the entire family causing Saundra’s new boyfriend to faint and the way she said as they left “I told him he ate a peanut, he’s not the sharpest person”.

The fact that Saundra was jealous to some degree left it open to see if she might actually want Noah back, we know that Noah intentionally wanted to make Saundra jealous and surprise her, I just don’t know if Noah is using Lauren as a means to get Saundra back or if he genuinely is going to move on and try to make a life for himself with Lauren.

We see the Petrelli family wracked with the aftermath of the mistake Angela made last Season by having Matt Parkman force Nathan’s mind into Sylar’s body. We knew Sylar had recovered his physical body and in this episode we see him come to bear. What I don’t remember is Sylar killing the Puppet Master and acquiring his abilities. I don’t think Eric Doyle’s abilities were stolen by Sylar from what I remember. But we hadn’t seen Sylar actually use his telekinesis to trap and paralyze people in chairs before but because he didn’t “mime” the motions it would appear he wasn’t using the puppet master ability.

The fact that some of Nathan’s personality still exists to try and hold Sylar back is the only thing that saved Peter and Angela from certain death. Despite how much Nathan was a corrupted character, he was a very interesting character on the show and I would like actually prefer Sylar to be purged and Nathan restored permanently though I think the opposite will happen. 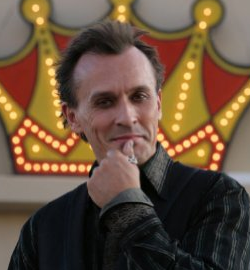 Meanwhile with Samuel we are seen what we all knew to be the case which is the murder of Samuel’s brother which was done by Samuel’s own hands. Hiro realizes unfortunately that he is nothing but a pawn to Samuel who has no intention to let him find Charlie. Hiro does manage to save Edgar from Samuel but the mysterious man in the Carnival who showed Sylar his own memories was able to somehow either steal or wipe Hiro’s own (maybe he has part of the Haitian’s abilities to wipe memories or can just steal them?)

Samuel knows that Lydia and Edgar are traitors so it is only a matter of time for Lydia, I think Samuel only keeps her around for her ability to find what he is looking for as a fortune teller type. Though Samuel is powerful and able to manipulate earth, move cities and mountains as they say, he is clearly no match for the powers of Sylar who has a much more diverse range of abilities. His nuclear ability alone could wipe out the entire Carnival and his regeneration makes any amount of stones and rocks Samuel could bury him with seem trivial.

What did Heroes Fans or Haters think of the episode? Leave me a comment or answer the quick poll.