[easyazon_image asin=”B004XFZ3UU” alt=”Warrior’s Way” src=”http://ecx.images-amazon.com/images/I/51KFzbIciVL.jpg” align=”right” width=”300″ height=”369″]The Warrior’s Way (2010) is an action action/fantasy/western written and directed by Sngmoo Lee and stars Academy Award winner Geoffrey Rush (Pirates of the Caribbean: On Stranger Tides), Kate Bosworth (Superman Returns), Danny Huston (Clash of the Titans), and Dong-gun Jang (The Promise, Tae Tuk Gi) in a film about a warrior-assassin–forced to hide in a small town in the American Badlands after refusing a mission.

“OK, you settle down. Got your ears open? This is the story of a sad flute, a  laughin’ baby, and a weepin’ sword. A long, long time ago, in a land far, far away, there lived a warrior, a warrior with empty eyes. He trained his entire life for one purpose. To be the greatest swordsman in the history of mankind. He’d just achieved his life’s ambition, but his heart felt emptier than ever.

Two clans, warring for 500 years, vowed to keep on warring until one of them didn’t have a single man left above ground. And so now, here he was, peering down at this very last of his enemy.  When that little warrior princess giggled, it did something to him inside. But this was no time for feelin’.  For when he spared that baby’s life, he put his name at the top of his own clan’s death list. With nothing but the clothes on his back, and the baby in his arms, he decided to pay a visit to an old warrior friend in a far away land”–Ron, town drunk.

When a filmmaker decides to combine different genres in film, they pretty much have to know what they are doing. The film The Warrior’s Way by director Sngmoo Lee would serve as a perfect example of what not to do ever again. 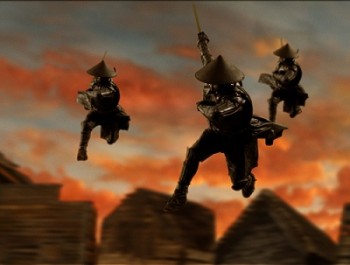 Yang (Dong-gun) is a mild mannered, yet ruthless assassin, whose sole destiny is to wipe the opposing clan from existence. His clan has been warring with them for over 500 years, and here, at the beginning of the film, you will see a spectacular display of samurai sword wielding action, paired up with high-flying artistic acrobatics, familiar to that of the Crouching Tiger, Hidden Dragon‘s famously choreographed action special effects.

After defeating his last standing enemy of the warring clan, Yang was down to its one last member—an adorable baby girl. Taken in by the irresistible smile, Yang decides to, instead, take the baby with him. This instantly casts him out of his own clan for allowing the lone enemy to survive. Now, this kind of thing should never have happen—allowing a potential rival to remain breathing. Therefore, his clan now sets out to find Yang and absolutely the most adorable baby I have seen on film, and kill them.

Yang, with baby in tow, is forced to leave his past behind. He heads to an old, 19th century western  American town where an old warrior friend of his lives, only to find out that his friend is dead. After a lifetime of ruthless hand-to-hand combat–this is where the world’s most dangerous samurai ends up. There to greet him on his return is Eight-Ball (Tony Cox), a half-sized former circus performer with both a likable and tough demeanor. Then we meet Lynne (Bosworth), an orphan out for vengeance, who endured watching her family mercilessly slaughtered by a corrupt Colonel (Danny Huston), while she laid injured on the dusty, town road. These two form a bond. She teaches him how to operate the town laundry, and he teaches her how to hone in on her knife skills, so that when the Colonel comes “house-calling,” she would know how to deal with him. Of course, whenever you have to pair a bumbling heroine with a skilled fighter something usually goes wrong. And it does. 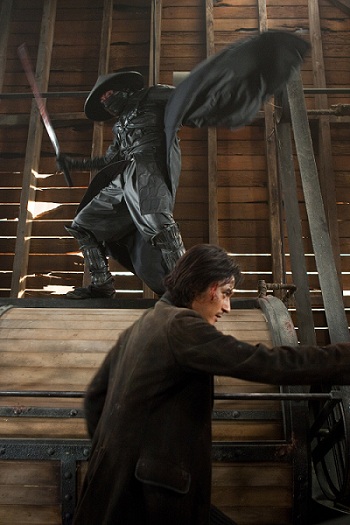 When the Colonel returns to terrorize the town, during a Christmas party, Yang has to step in and defend Lynne and the townspeople. When Lynne fails to kill the Colonel, the town prepares themselves for him and the rest of his gang to return. However, when the rebel ninjas begin to show up, at about the same time, to exact revenge upon Yang and to kill the last of their rival clan (the baby survivor,) the film begins to get some better-deserved action. However, these moments of desperately needed viewing action scenes were fleeting.

When the intensity of the town’s vengeance-lain plot begins to thicken, Eight-Ball “awakens” the town drunk, Ron, to return to his previously hidden, violent roots to help save the town (Academy Award Winner, Rush). Which, I have to say, performed considerably well, provided that his role was as the town drunk, and also was much of the films most interesting presence, along with the town’s setup in the desolate outskirts of nowhere.

The film was cinematically engaging to watch. Even if the gene-mix was all wrong. Granted, this film certainly has the most impressive cinematic action to watch on the big screen. Actor Dong-gun’s presence on screen as a samurai assassin is concrete and believable. However, Kate Bosworth’s role as the teeterly vulnerable and hapless heroine was the primary reason this film did not go over too well for me. You just cannot pair a skilled, relentless killer with a bumbling, cliché slang-wielding cowboy avenger. It simply does not work. This film was not intended for comic relief, regardless of its initial premise, it was suppose to be set to have a serious undertone.

Let us not begin to mix and confuse samurai warriors with an ill performing lead actress (Bosworth) who was clearly wrong for this role. I closed my eyes during many of the scenes featuring Bosworth and I endured her last, revenge laden fight sequence because I sort of hoped it did not end well. I know, harsh words–but thankfully, it is only a movie.

At least the baby was a cutie.

The Warrior’s Way DVD features include: