LAS VEGAS, Jan. 3, 2019 /PRNewswire/ — Finch Technologies announced today that Qualcomm Technologies, Inc. has tested and confirmed compatibility of its Qualcomm® Snapdragon™ 845 VR Reference Design with the fully mobile FinchShift™ controllers. HTC VIVE will offer the fully mobile FinchShift™ controllers to its developer community. These controllers allow tracking of hands and body, using a combination of patented FinchBodyModel™ software together with controllers and a unique pair of FinchTracker™ armbands. FinchShift controllers allow the wearer to move freely and naturally when in VR or AR, providing true six degrees of freedom (“6-DoF”), with no field-of-view restrictions and without the need for or limitations of cameras or base stations – truly mobile VR/AR experiences. 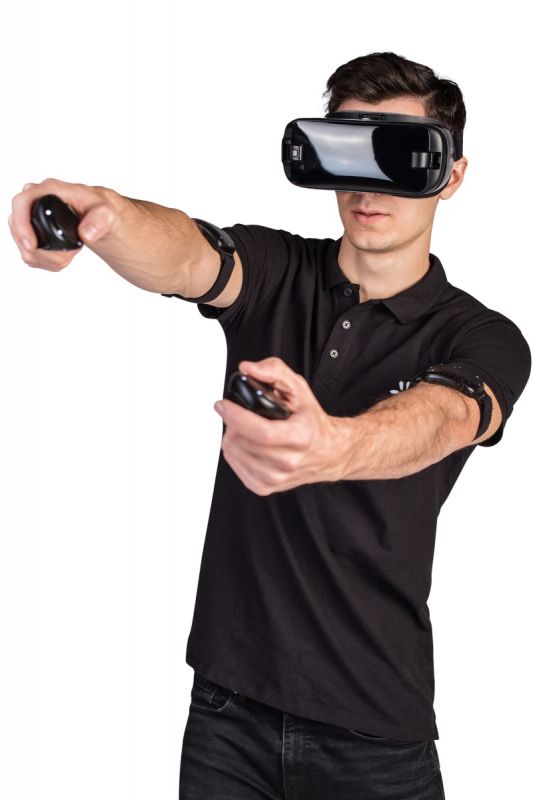 Finch is working with leading hardware and software developers to break down barriers to natural, intuitive movement in consumer and enterprise VR as well as AR applications. At CES 2019, you can visit Finch Technologies at South Hall booth 21837 or the Qualcomm Booth in the Central Hall booth 10948 to experience it for yourself.

The FinchShift controller allows for room-scale, 360-degree tracking and because it does not rely on cameras or base stations, there is no field of view limitation. Previewed at XRDC 2018, FinchShift controllers have received critical acclaim for their universal compatibility, elegant design, and spatially accurate full freedom of movement. The FinchShift controller is available in either touchpad or joystick designs and can be used in either single arm or dual arm modes. The controllers are compatible with a wide range of devices and headsets and work with both iOS and Android operating systems. The controllers utilize the latest IMU sensor technology by Bosch Sensortec and are combined with proprietary sensor fusion algorithms from Finch. Both the controller and armband are able to offer up to 18 hours of active use and weigh in at less than 3.6 ounces for the controller, and less than 1.9 ounces for the armband.

HTC will enable FinchShift controllers in an upcoming WAVE SDK release. “HTC has worked with Finch Technologies over the past two years, and we are excited to include the FinchShift controllers in our ever-expanding VIVE eco-system,” says Rikard Steiber, President of HTC VIVEPORT. “For both developers and VR enthusiasts, these controllers help to break down the barriers to intuitive VR interaction in the all-in-one category.”

“Intuitive interaction with full freedom of movement is critical for immersive XR experiences and a must for mass consumer and enterprise adoption,” said Hugo Swart, head of XR at Qualcomm Technologies, Inc. “Qualcomm Technologies continues to expand the list of collaborators that complement the Qualcomm Snapdragon XR platform. The FinchShift controllers provide a natural and seamlessly integrated 6-DoF experience.”

About Finch Technologies, Inc.: Finch Technologies enables brand new experiences for a larger audience of VR and AR applications, through patented kinematic hand and body tracking technology that allows full freedom of movement, without the need for cameras or base stations. FinchShift controllers offer universal compatibility giving developers a new, cross-platform industry standard. Finch Technologies works with and provides controllers and technology to some of the biggest names in virtual and augmented reality. Finch Technologies is privately held, with their HQ in Berkeley California and offices in Asia, and Europe. Visit http://finch-vr.com to learn more.

Qualcomm and Snapdragon are trademarks of Qualcomm Incorporated, registered in the United States and other countries.

Qualcomm Snapdragon is a product of Qualcomm Technologies, Inc. and/or its subsidiaries.