Note: The creators of Skara sent us an alpha build of the game. Currently several features are not available to play as of yet meaning this is a very small glimpse of what playing Skara may be like.  Feel free to watch the video below or continue reading the article.

Free to play gaming has been making its presence known for the past decade. With games like Team Fortress 2, HAWKEN, and Rift showing just how well such games can be balanced – I am eager to see if the makers of Skara are up to the task too. While the Kickstarter alone shows a ton of good things to expect, it’s always preferable to go hands on with the actual game to see how things are executed.

So far the alpha is more of a bare preview as opposed to an early game build so it’s hard to grasp if promises are being kept. The actual graphics of the game are quite beautiful but the character models could use a bit of love. Fighting arenas are a decent size and certainly have a menancing look to them. The weapons are just as grisly looking and pleasing to the eye 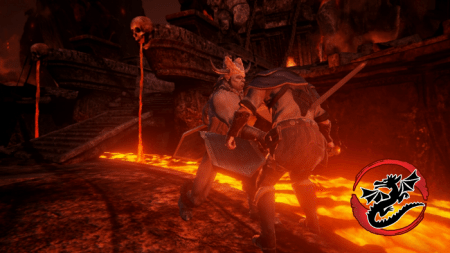 That lava sure looks like it could burn right down to the bone!

Skara’s fighting feels very hack and slash but that does not always mean it’s a bad thing. One major issue so far is the camera’s ability to cooperate with you as you fight. I had more trouble battling the camera than I did my actual opponent.

If these technical issues are addressed, I can see myself happily embrace this medieval versus game. With so many creators embracing sci-fi shooters for multiplayer games rather than the good old sword-and-board — it warms my heart to see Skara give a medieval era world some love again

If you’re interested to see how Skara continues to tweak and build the game, check out their official site or keep an eye on Dragonblogger.com for more coverage.

Mitra Faridian first joined the site in 2011 under the handle “Persian Poetess.” Since then she has become one of Dragonblogger’s most passionate videographers. She is a regular on the Dragonblogger YouTube channel and has produced several high quality video game and product reviews. Her gaming and entertainment taste is very eclectic and she’s always open to a fun new virtual experience. Email her at the following address: mitra [at] dragonblogger.com