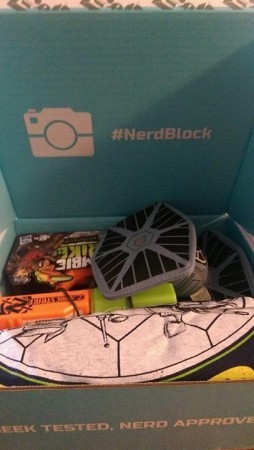 I received my July subscription for Nerd Block this morning. I was excited to see what was in this months box as they has been advertising it was going to be jam packed and had trouble closing the box. On that I was a bit disappointed when my box felt about the same as it always does.  There were only 5 items in this box. usually there are a bit more, even if they are just sticker sheets and smaller items.

Nerd Block is a monthly subscription service that sends you a box full of nerdy goodies every month.  They are also available for kids in their Jr. subscription and you can chose if the box is for a boy or a girl. Here is what you can expect for this months box. 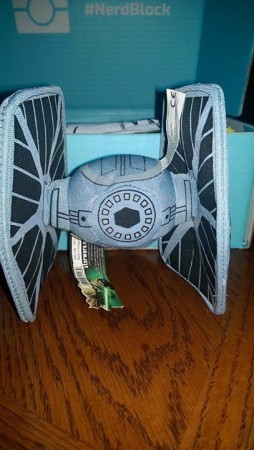 First up is a Star Wars deformed vehicle stuffy.  These are licensed and direct from starwars.com . I received the Tie Fighter but the card shows 3 different ones that you could receive. 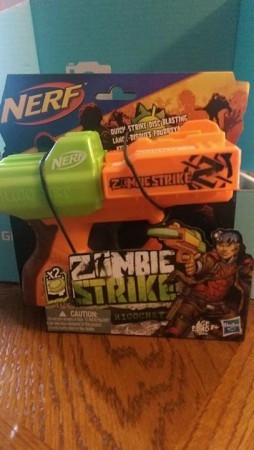 Next I got the Nerf Zombie Strike Ricochet gun.  This is a disc shooting plastic gun and it comes with 2 plastic discs.  Great for practicing your aim or just to bug a co-worker with. 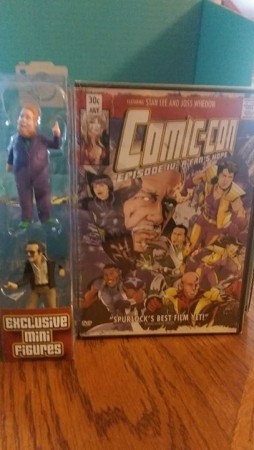 Next is a DVD documentary by Morgan Spurlock (Super Size Me). This follows the lives of 5 people  as they descend the mecca that is San Diego Comic-Con 2010. This includes interviews with Stan Lee, Kevin Smith, Joss Wheden and more. Attached to the DVD are to figures I received Harry Jay Knowles and Stan Lee.  Joss Wheden and is also available I can tell from the card but the 4th figure is covered and I can’t tell who it is but I assume it would be Morgan Spurlock. 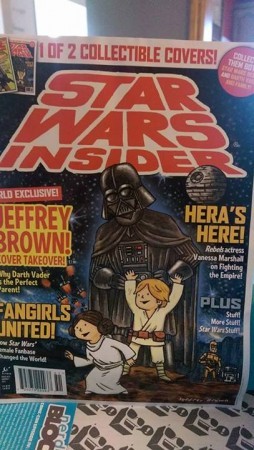 There was a Star Wars Insider magazine at the bottom of the box. usually the magazines come in perfect condition but this time mine was a bit bent at the bottom. This is an Official Fan Club magazine that shares everything you need to know of Star Wars past and present. 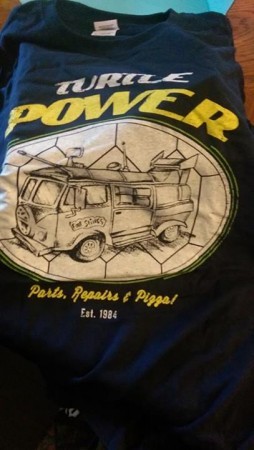 Last is always my favorite part of the box, the t-shirt. This moth I received a navy blue Ninja Turtles shirt. I do like this shirt but it doesn’t seem to fit the rest of the theme of the box. You will always get the right size shirt as you tell them when you subscribe. These shirts are great quality and I have not had any problems with them.

Did you receive a box this month? Let me know if you received anything different or if you were a bit disappointed this month as I was.