Once again my Sunday has come and gone. I swear when Game of Thrones is on, it is the fastest hour of my life. But if you were not able to watch last night here is what you missed. Warning this post will contain spoilers of the episode. 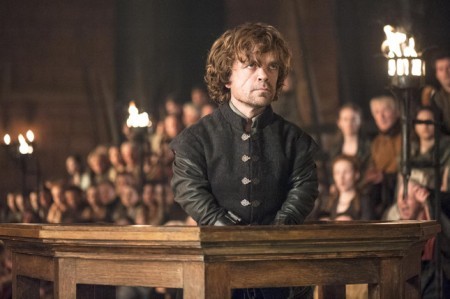 We start off in Kings Landing for the unfair trial against Tyrion Lannister. His brother Jamie comes down with 2 other guards  to the dungeon where he is being held. They look at each other with sad eyes and then Jamie nods to the guard. He head to Tyrion to place the handcuffs on him. He asks if this is necessary. Jamie tells him this is their fathers orders. We all know how much Tywin despises him and since he is also 1 of judges I’m sure this won’t help there be a fair trial.

In another part of the castle there is a small council meeting taking place before the trial.  They discus what is going on with Daenerys. How many soldiers she has and who she is ruling over. They mention the dragons but laugh it off like no big deal as they are only babies and no one has won a war with dragons in over 300 years.  I don’t get how they can not be afraid the fact that she has them in the first place.  They will get bigger and will be harder to fight off if they don’t take care of this but no one seems to worried. 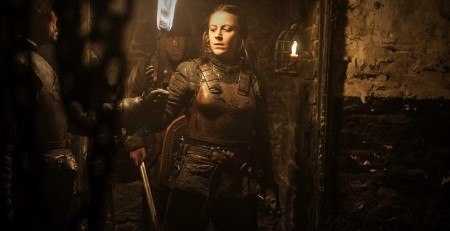 We now move to the north where Yara (or Asha in the books) is reading a letter about Theon being held captive. They also received Theon’s “toy”  (yes his sausage) in a box. She assembles some strong iron men and takes their fastest ship to go save her brother.  When she gets there she can see how broken and corrupted he is. She tries to lure him out of his cage but he insist he stays and that he is Reek not Theon. After a small battle and a few dead men she heads back to her ship without Theon. The men ask where is their prince and she tells them he is dead.

Back in Ramsay Snow’s castle he uses this opportunity to take even more control of Reek. He brings Theon into a room where he tells him he is going to reward him for his loyalty and that he has made him a bath. As he undresses you can see scars left all over his body from the torture Ramsay has done to him. when he drops his trousers you can see a smirk on Ramsay’s face as he looks to where Theon’s sausage used to be.  Theon gets into the tub and Ramsay asks if he loves him. He tells him yes with his little scared boy face. Ramsay proceeds to start to wash him and asks if he can help him take back a castle held by the bad men who came. Reek asks what does he have to do and Ramsay tells him he needs to pretend to be someone he is not, Theon Greyjoy. 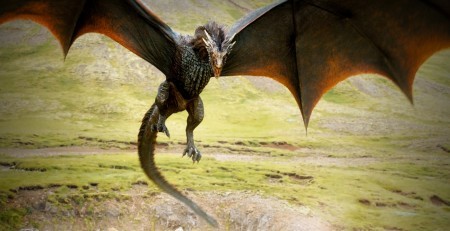 Back in Meereen, a small boy is in the field with a few goats and his father. He is sitting on a cliff when all of a sudden a dragon appears. as they start to run dragon breathes his fire killing the goats and taking them. I have been told in the books the dragons eat the children so I was hoping that was going to happen but I guess they wanted to do goats instead for the show but I would have been ok if he ate the kid,  a dragon needs to eat and grow too, lol

Daenerys is back at the castle in Meereen where she is sitting high in a chair and taking people 1 at a time to listen to their grievances.  The goat farmer enters and tells of how her dragon killed his animals leaving him and his family with nothing.  She tells him she will pay him 3 times of what his heard was worth and the man seems happy with the outcome and leaves. Next enters a man from Meereen who has a squire or servant of some sort who is attempting to announce who he is. But Dany seems a bit annoyed and cuts him off telling him if he wishes to speak he can speak for himself.  The man (sorry I can not remember his name if it was said) asks if he can take his father down from the steak he was hung and killed on to give him a proper burial. Dany again seems annoyed and attempts to bash what his father and the other men did to the slaves.  He tells her that his father was against what the other masters wanted but that he was outnumbered and had to go along with the others. She agrees to let him take down his father and give him his burial, but that the others stay. The man leaves, Dany is looking tired and asks how many more people were waiting.  Missandei tells her only 212 more to go. 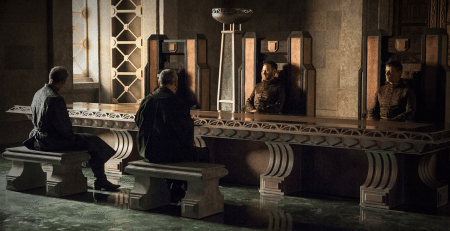 Stannis and Davos have arrived in Braavos. They have gone there to speak to the Iron Bank to try to get a loan to build their army.  Stannis is annoyed at how long they were left waiting when 3 men finally enter the room and sit down. Stannis pleads his case but the 3 men do not seem interested in anything he has to say. As they are telling Stannis no, Davos steps in showing him that Stannis is the right man to be investing in and that he is a man of his word. That Tywin is old and once he dies he will have no one left to be able to pay back his debt and that Stannis is in his prime and with their help he can become king and pay them back.

Davos’ plea must have been good because next they cut to a bath house where Salladhor Saan ( Davos’ pirate friend) is in the tub with 2 women. Davos tells him he needs to be ready to ship out in the morning and hands him a case full of coins and says he left another with his wife. It looks like Stannis’ army will be ready to go very soon. I am curious as to why Melisandre is not present for any of this as it seems like this was important to be able to get this loan. 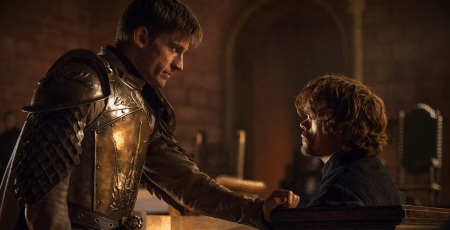 Finally we are back in King’s Landing for the trial. This whole things as my nerves going as Tyrion is the only Lannister I like but we all know how GRRM likes to kill people we love.

The call for witnesses. It seems the niceness that Cercei was showing last episode worked a few people but that she must have also been threatening some others as no one seemed to be standing up for Tyrion.  First were the lies of Cercei where she recites a threat she made to Tyrion but said he made the threat to her. Next up was grand Maester Pycelle with lies of how Tyrion stole poison from his office when he held him captive.  Also a kings guard telling stories of how Tyrion slapped and threatened Joffery but leaving out the reasons of why he acted like that was because he was torturing Sansa.

They call for a small break and everyone left the room except Tyrion who is left in is box. Jamie went to talk to Tywin to see if there was any way to save him.  He can see that his father is not going to budge so he tries to make a deal. He agrees that if he saves Tyrion that he will leave the Kings Guard and take his rightful place at Castely Rock and carry on the Lannister name. Tywin who is a sucker for linage agrees that Tyrion will be found guilty but that he can plea for his life and they will send him to the wall to be a part of the Nightswatch and then Jamie will wed a suitable woman and have a family.

As everyone enters back in Jamie tells Tyrion to keep quiet and let it play out and to just trust him and make the plea so he can go to the wall. But the biggest blow to Tyrion was when Shae walked in. She began to twist the truth and tell lies of how he and Sansa plotted to kill Joffery.  I guess calling her a whore before she left still stung a bit as she threw that back in his face as well.  This crushed Tyrion and he began to confess. Everyone sat up in their seat. His dad says you admit to murdering King Joffery. Tyrion said no I admit to being on trial for being a dwarf and that how he wished he had done it but that he didn’t.  He continues to blast out at everyone wishing them all dead and then turns to them saying that he wishes to have a Trial by Combat.

I can’t wait to see who he has fight for him and who will Tywin will get to fight against him.  I hope you are enjoy the recaps as much as I enjoy sharing them with you.

Don’t forget you can  Buy Game of Thrones Season 3 now on Blu-Ray!