Our website is usually filled with computer peripheral that includes a mouse, keyboards, and headsets, but we rarely get to review a gamepad so today, we fulfill that gap with the review of Gamesir G4s Android/PC gamepad.

Gamesir is a company which specializes in PC, and Android 2-in-1 Gamepad and GameSir G4s is their latest offering which supports both PC and Android. And what’s more awesome about it is that it features a design similar to that of an Xbox 360 controller so if you previously owned a Xbox 360, you’ll feel at home with the G4s.

So let’s have a look at the unboxing below before we go deeper. 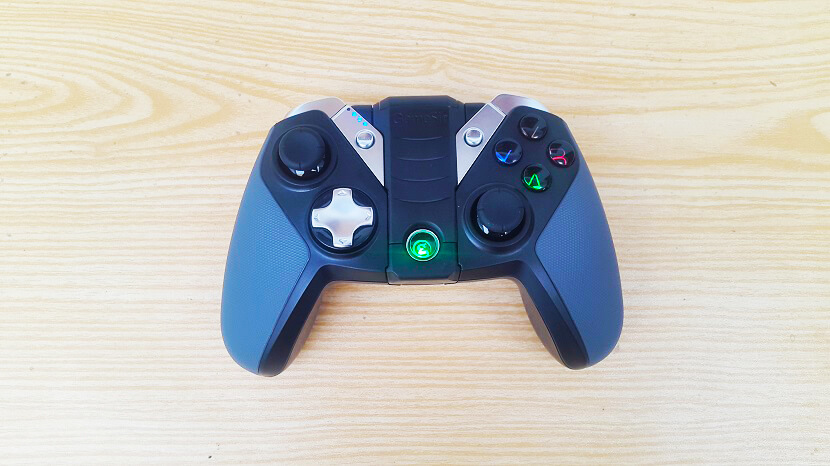 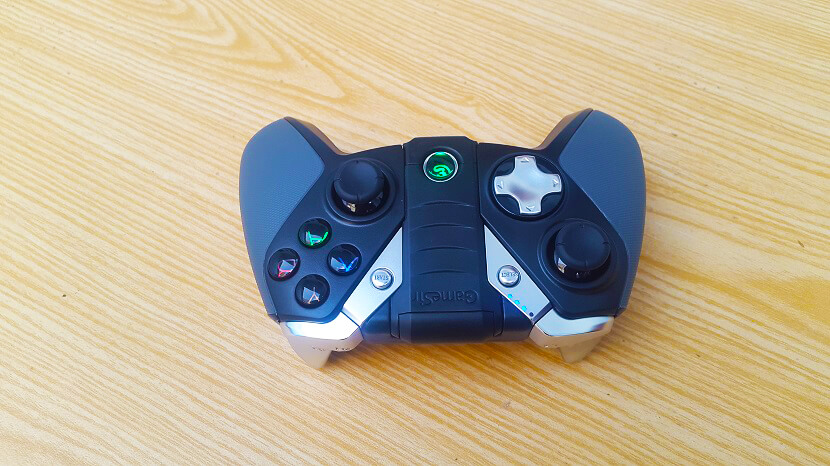 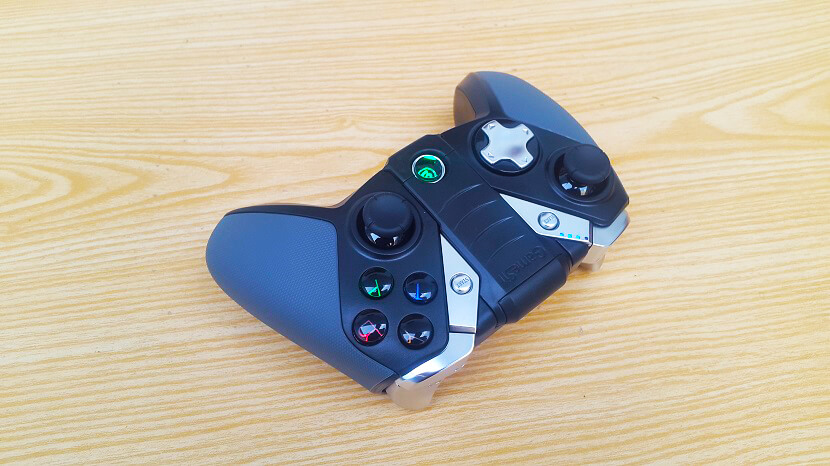 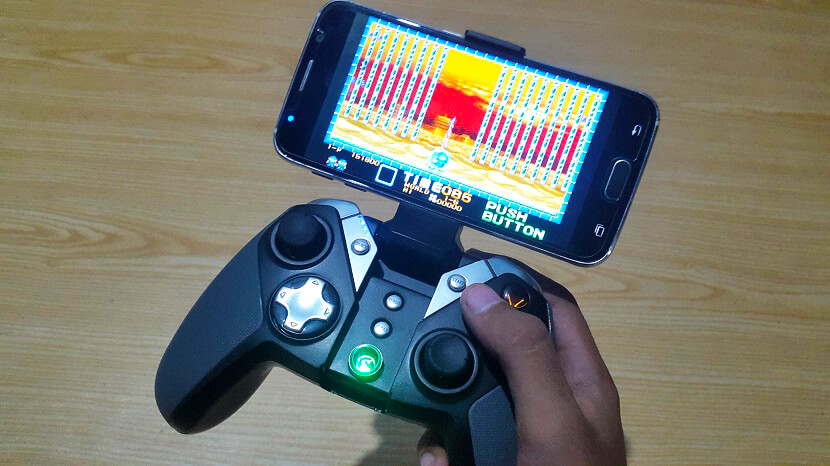 The GameSir G4s features a design similar to that of an Xbox 360 controller so if you’ve been a Xbox 360 owner; you’ll be pleased with the body, body texture and grip of the controller. The Analog handle is really smooth and accurate with R3+L3 support. The D-pad feels great as well but when it comes to the buttons and the L1+2 and R1+2 keys, they feel a little generic. (button). Wheres in the Xbox 360 controller, you get to push the L1 and R1 button all the way in, the L1 and R1 buttons here are just like mouse buttons where the button doesn’t go in but just clicks. In the beginning, I was pretty annoyed with the clicky mechanism of L1 and R1, but you get used to it after some times. Then the L2 and R2 features pressure buttons or triggers similar to other gamepads so you have to press and hold them precisely or you may face breakage in a continuous press of the R2 and L2 keys. So, in short, there’s some work need to be done on the R1, and L1 buttons which I assume are like that to make the compact design with multiple technologies inside work. 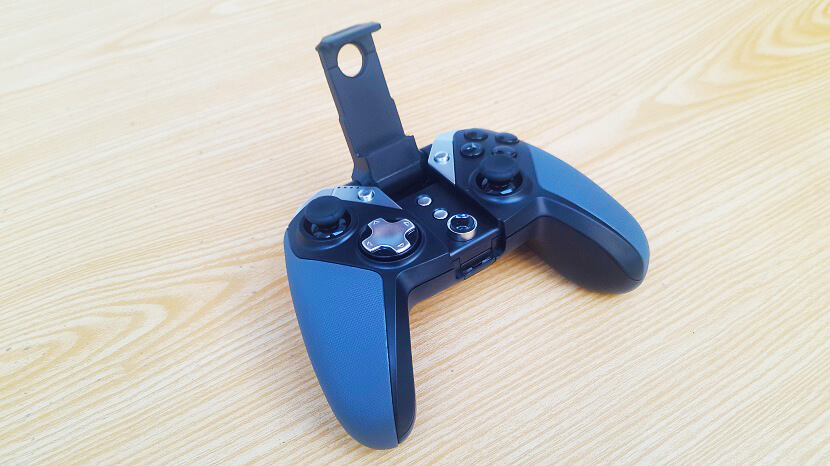 Other than that, the smartphone holding clip design of the Gamesir G4s is a great feature. You can quickly flip the clip and attach any of your smartphones and start using the gamepad without the need of using any external addons/attachments. And when you’re done, just fold the clip back, and the gamepad’s back in its original form. I really like how there’s no external attachments or adjustments needed to be done with the Gamesir G4s if you want to use it with mobile or PC anytime. Even though most of the smartphones will fit perfectly without much possibility of the mobile slipping out of the clip, you also get a separate header with rubber on one which can be attached to the top of the clip. What it does is, provide more friction for your curved-side mobiles making it even harder for your smartphone to slip out. 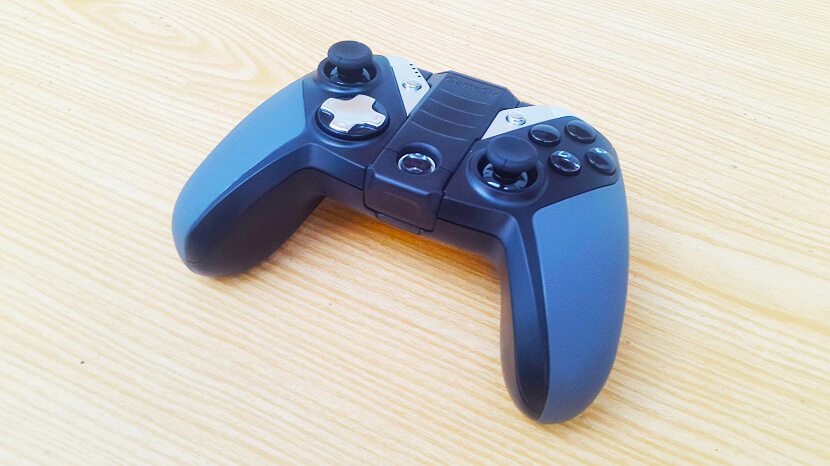 And GameSir has taken the portability factor a little too far with the G4s. If you notice below the clip end, you can see a see some lines there hinting at a secret compartment, well that’s where the tiny PC wireless adaptor of G4s resides. So you can take your G4s anywhere along with the PC adapter attached right into the G4s without the worry of losing or misplacing it and just detach it from the gamepad and attach it to any PC, and you’re good to game. The GameSir G4s sure seems like a gamepad filled with many great features so far.

So now that we know that the G4s is a PC and Android supported gamepad let’s have a look at how the connectivity between both Android smartphones and PC works.

To connect the G4s with any Android smartphone, all you got to do is attach the smartphone to the gamepad (not necessary) and press and hold the giant “G” (home button) and A button on the gamepad for 3 seconds. The home button will start blinking in green color which means the gamepad is in pairing mode. The gamepad will appear as Gamesir G4s or sometimes in numbers, but you’ll know which one it is by looking at the thumbnail which appears as a keyboard. Now just go ahead and pair both devices and you’re ready to go. As a confirmation of connectivity, the home button will turn solid green.

The gamepad should work with most of the games, especially the games from the Happy Chick Application, but other times you’ll need to re-configure the buttons in the application’s gamepad/control settings.

To connect the G4s to PC wirelessly, just take out the wireless adapter from the G4s and attach it to any of your PC port. Then press and hold the “G” and “x” button for 3 seconds, and it should be connected to the PC. As a confirmation, the home button will have a solid Blue color.

Mouse and other features:

To add some more awesomeness to the already excellent feature list of the Gamesir G4s, we can also make the G4s work as mouse both on PC and Android device and also control the vibration and the LED brightness.

You can control the vibration of the GameSir G4s just by pressing the turbo button and the D-pad up/down.

Happy Chick is an application by GameSir in support with some others that brings games from multiple platforms to Android smartphones via emulators, and of course, it also includes Android games. 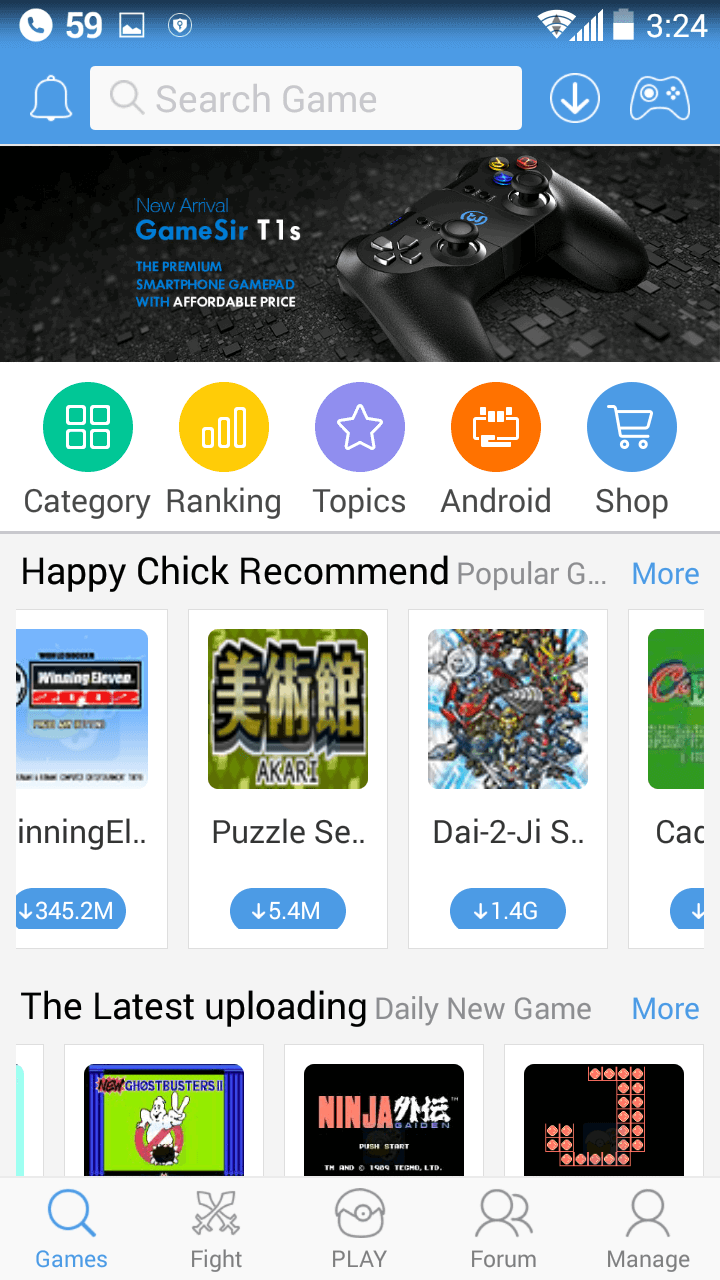 The best thing about this application is the wide variety of emulator supported games, and they work right after installation without requiring a button remapping. The above picture is the home page of the Happy Chick Applications, as you can see, the games are ready to download. Below you can see Games, Fight, Play, forum and manage tabs. In the fight tab, you can find most of the famous fighting style games, like KOF, Street Fighter etc. In the Play tab, you can see, play and delete your already installed games from Happy Chick. You can also access the forum from here. 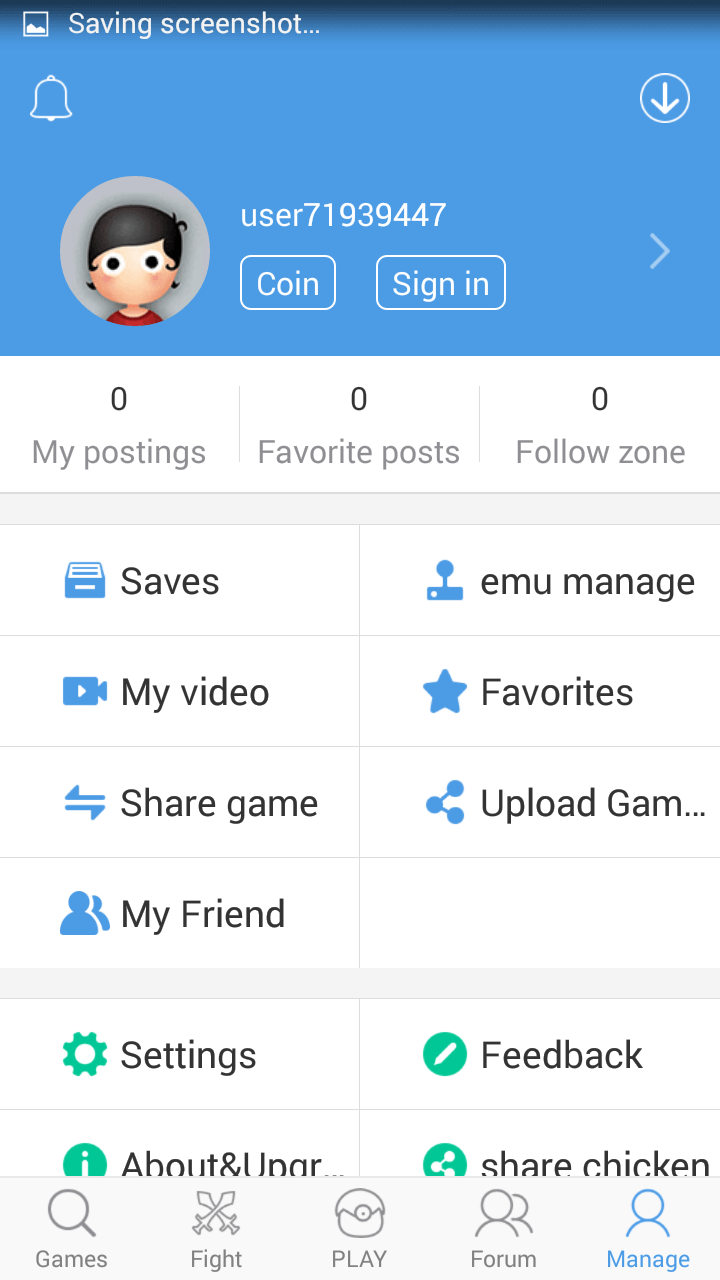 In the manage section, you can backup and restore you game saves. You can install/delete specific emulators. Not sure what the My Video sections does as it’s in forign language. You can also share games with the Happy Chick Application if the other person also have the application via the Share game options.  You are also able to customize general settings and check for application upgrades from here. 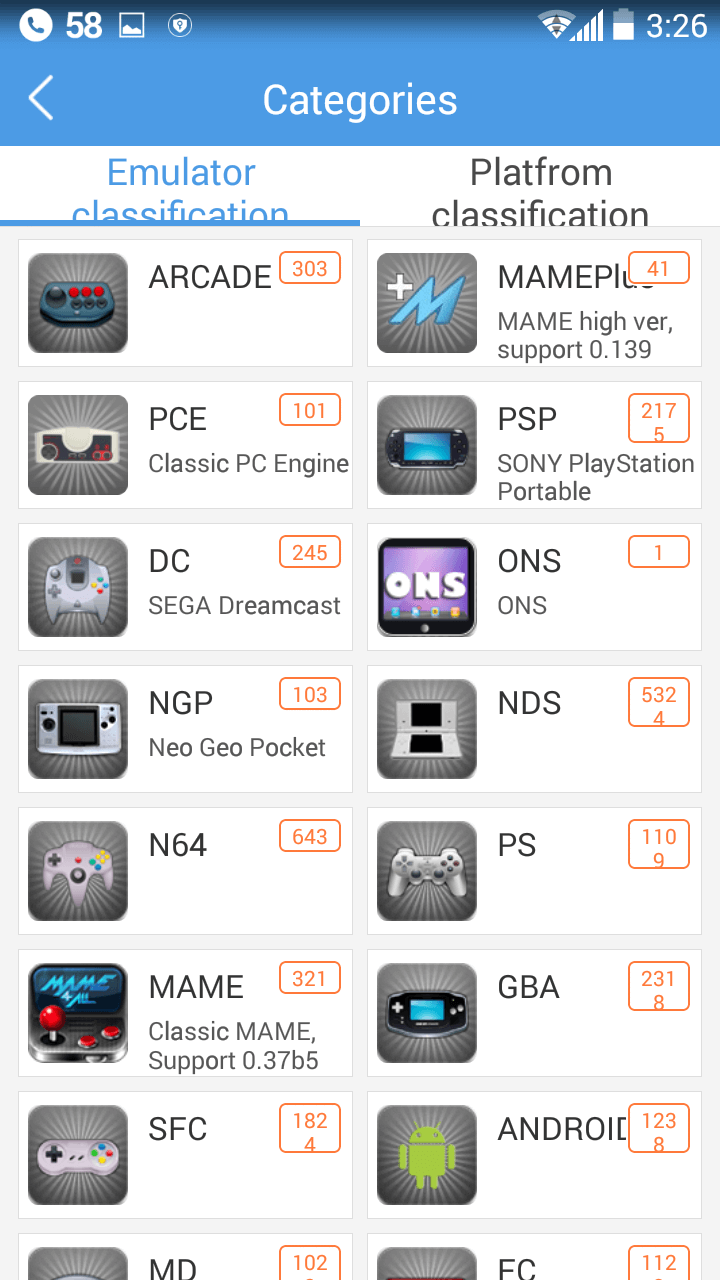 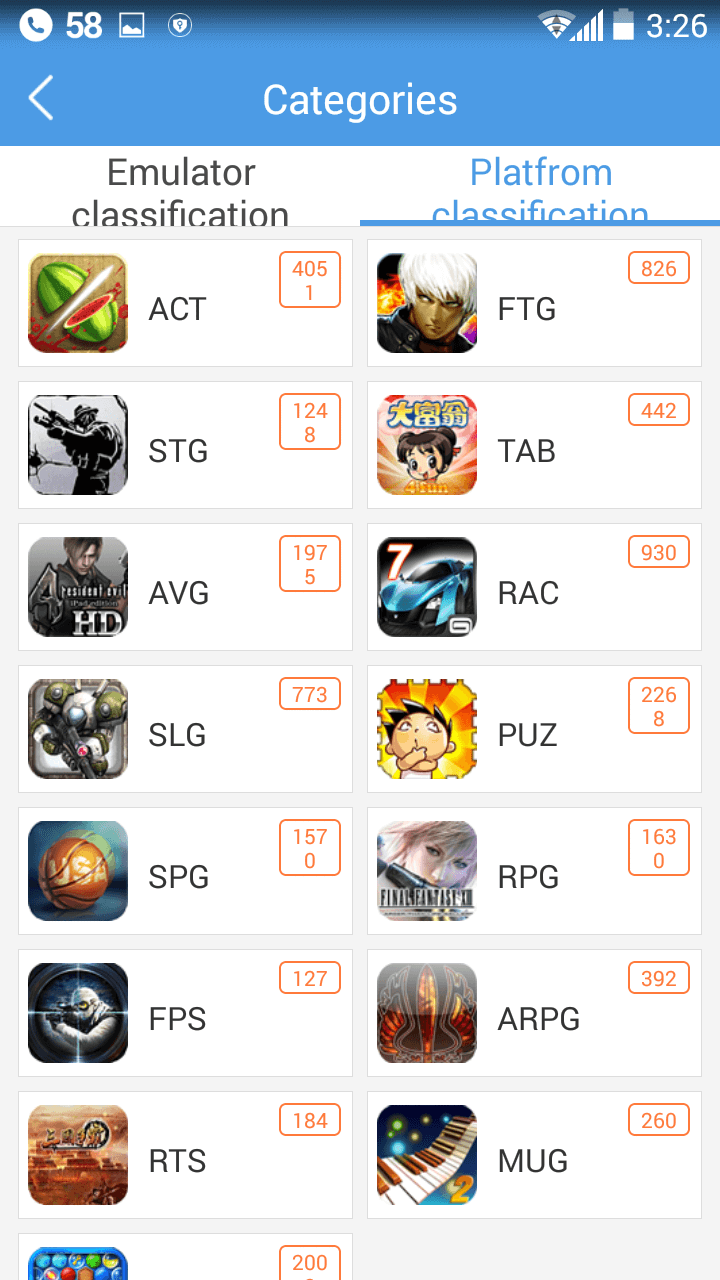 Finally, in the category, you see a list of games sorted either via the platforms, or the emulator.

The GameSir G4s is advertised with 16 hours long life battery at one time full charge. And in our usage, the claim stands correct. With only one time charge, I’m able to get through almost more than half of my week with the G4s. That is some amazing performance coming out of the 800mAh lithium battery. Though the battery timing might not be same on your side as there are some major factors at work here. The LED brightness, the Vibration intensity and wired or wireless connectivity will hugely impact the battery run time.

Simply put, I love using the G4S Gamepad. The battery timing, the buttons feedback, the analog stick movements, everything is great on the G4s. The best part is, you can just plug in the USB dongle into your PC and forget about it. So whenever you power on the Gamepad, connects to your PC directly. But, you do need to take out the dongle if you want to connect the gamepad to an Android phone since it won’t enter the pairing mode if connected to PC.

And talking about smartphone connectivity, the G4s even works well there. All you need to do is to reconfigure the gamepad buttons in the game, and you’re ready to go. And the G4s holds the smartphone to the extent that you can even shake it. Though you might need the extended clip to hold down some smartphones for better grip. Now that the VR platform is taking over, I can only imagine how great it would feel to use the G4s with VR games and applications. Which Unfortunately I wasn’t able to do this time.

The HappyChick application is also a very fun portal of support games across the different platform that can be emulated on your smartphone. You also come across some classic titles over there that once crosses you eyes; you can help but download and play it.

Now coming down to the price, the G4s costs about $49.99 which in my opinion is a great price point. If we compare it against the Xbox One Controller along with the wireless adapter, that setup can cost you somewhere around $60+, and you won’t even get the mobile connectivity feature along with that. So concluding the review, I would like to say that I’m very pleased with the GameSir G4s and would definitely recommend it to anyone. The GameSir G4s proudly takes our 5-star editor choice.