Today one of the most important things online is one’s anonymity and their privacy. The internet may seems a safe place to some, and the websites they use regularly may even feel safer, but almost every website isn’t as safe as they would look like. One of the most common social media places you would be familiar with is Facebook, where even if you de-activate your account, all the Data (messages, pictures) would remain in their database.  But this is just your data being stored and never truly purged, which is secondary to the real concern some would have.  This is what’s is being monitored by Google, ISP’s, NSA and other intelligence agencies.

Whereas Google usually keep track of your interest for their targeted advertisement, ISPs have almost everything you do online, from your search queries to your username and passwords, and when it comes to the NSA it’s a whole other level of surveillance. You surely have heard about “Edward Snowden” and the various tidbits of information he has leaked already right? He was a former CIA agent and a ex-contractor of NSA (National Security Agency), this guy shocked the mind of more than millions when he exposed that US government is spying on their own people in ways you couldn’t even imagine.

Tor: The Best Tool For Anonymity

When there are those big giant eyes over us, is there any way to secure our identity? Or do we simply live on like this with no care for our personal information? Well there certainly is an option, and that way itself was originally a concept by US Naval Research Laboratory. TOR which stands for The Onion Router is a Mozilla Firefox-type browser, but don’t go on the looks of these two browsers as they have got their own differences under the hood. TOR browser uses OR (Onion Routing), in easy words this means it uses an anonymous network, where the message (outgoing) is highly encrypted in numerous layers, which is then bounced off numerous routers before reaching the recipient (destination) making it hard for tracking to know

The concept of TOR/OR as mentioned was created by the US Naval Research Agency to provide the US Navy a high level of security for their online communication and was adopted in 1998. Later it became public and in 2004 TOR started providing location hidden services (anonymity) to public. Since then it has further been improved by Tor Project Inc.

How to set up TOR:

You can download the TOR browser from this link. After downloading, just like any other browser or program, the installation is simple. You select the language, installation directory and the setup would do its work. 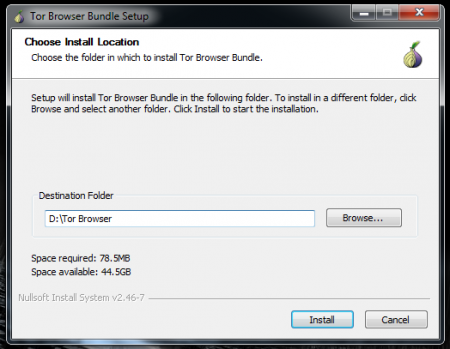 Once installed, a new window would open, where you could just click on the “Connect” and it will launch the TOR browser or for advanced networking users, click on “Configure” and define your network(s), opened/closed port(s) etc. 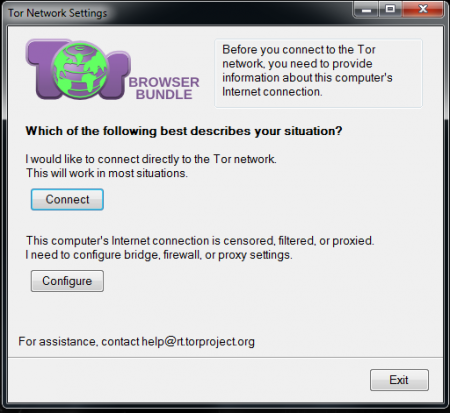 When you are done configuring TOR browser or just clicked the Connect button right away, the TOR Browser will launch, which looks almost similar to regular firefox, but is rather running on TOR network. 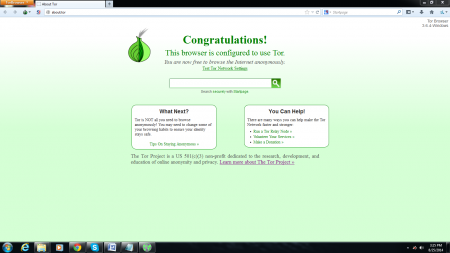 Though keep it mind, running TOR browser doesn’t means your whole system is running on TOR network, it is the browser only that is on onion routing. Now you just browse or do whatever you want, as an anonymous person. Your IP will keep changing after a few minutes, which makes it quite impossible for attackers or prying eyes detect your location.

For running your whole system on onion routing, Tor Project has their own OS named Tails which you can download from this link, and we might be covering this in a while also.

TOR since providing total anonymity to anyone who uses it gave a boost to many researchers/journalists/activist/traders/organizations and other services in their work who don’t want to disclose themselves. It also gives access to locally blocked websites by governments, like YouTube, which has been blocked for a few months in Pakistan now (that’s where I am from). And most of all, TOR gives you access to the deep-web/deep-net or hidden internet space which is even called the Darknet by most (Yes, it does exist!). Not even once you might have seen a .onion or at least a working .onion domain in your life right? That’s because even if you came across one, you wouldn’t be able to access it, because these type of websites are run over TOR networks only, thus only accessible via TOR browser. One of the biggest example would be the Silk Road, which was all over the news a few months ago as one of the biggest drug dealing websites on Darknet. Even with your searches for the website you might not have found the working link, cause it was also on the TOR network only.

Is Darknet A Safe Place?

Even if TOR gives access to Darknet, does it means accessing Darknet is safe? Well that depends on how you use it, and for what purpose. For those who want to make a living by illegal activities, TOR might be a heaven on earth for them. I’ve been on TOR for numerous times for research purpose, and the things I’ve seen, you may not believe. There are numerous marketplaces as huge as eBay on TOR, dealing from drugs to firearms, from pornographic content to child sales and equipment I’ve never seen before.

How well is this going if you may ask? Well there is even a hitman website for hiring, who would kill anyone for around $8000 in US/UK/Canada, and there only rule was no child under 16 and no top 10 politicians. If I remember correctly, US President Barack Obama was no. 1 on the hit list. Whereas the payment is concerned, Bitcoin is their ultimate ally.

There was a quote that said something like in order to gain something, you have to lose something, that applies here also. A drawback of TOR would be, you can’t surf the web like you used to. You will keep getting plugin alerts on regular websites (for your own good) because most of the addons/plugins are usually disabled on TOR for your anonymity. Secondly, if you try to login to your Facebook/Gmail/Ymail account, your ID might get blocked for security reasons because the IP address you would be trying to login with wouldn’t be in the system’s friend list, and the IP keeps changing after a few minutes, so it might even be an IP address from the other side of the world, or maybe even from outer space after a while (Pun intended)? And when it comes to Darknet websites, users don’t find them quite the attractive, as they are used to the fancy themes and widgets or third party plugins etc, because most of them are usually just plain background with some images and texts and tabs for other pages.

So all and all, if you want to do some work or research, hidden from your social network or friends and family or even the local government which might have ban on certain sites that matter, TOR is the way to go, and if you are on the darkside of the darknet, I don’t think I have any suggestions for you.

Keep in mind, that TOR maybe the best option for anonymity, but it doesn’t not mean you are 100% secure, if you want to increase your anonymity/security, head over here to read official guides. Need any help or need to inform us with something, feel free to mention in comments and don’t forgot to share it with your friends who needs anonymity.