Useful notes are present at the bottom of page. Might just read them first.

Having an AMD GPU and seeing all of the hype around Bitcoin, Litecoin, Dogecoin and other coin-based digital currencies,makes you think it  is something you can’t ignore right? Well, why should you, when you can also mine a few coins with the hardware you already have? Although mining might not be profitable if you have expensive electricity rates and lack a decent number of high-end GPUs, but for experimental purposes one certainly can try, right?

Coins? Algorithm? What?
So before getting into mining, let’s first talk about something of key importance: what digital currency/ies you’re going to mine. There are currently coins from many different algorithms, such as SHA-256, Scrypt, X11, X13, Cryptonight, and others. But, if you’re a mining newbie , you might have only heard about Bitcoin, which is based upon the SHA-256 algorithm. The mining process depends on your mining power generated by GPU and the coin’s difficulty, and as of now the mining difficulty for Bitcoin is so high, that I’m sure with the current hardware you won’t be able to get any luck. But, there are alternative ways; for example, you can mine coins based on scrypt/X11/X13 or any other algorithms which have a rather low difficulty, then convert these coins into Bitcoin and sell for cash or purchase items online with it.

There are quite a lot of coins – based on different algorithms – coming in every week, so look out for whichever is the best in regards to difficulty, value, innovation, profit and mining power generated by your GPU. You should know that mining power (measured in h/s, kh/s, mh/s or gh/s) differs from algorithm to algorithm on a single GPU. Once you’ve decided what digital coins to mine, let’s set up your rig for mining.

Mining On X11 Algorithm:
For this tutorial, I’m going to demonstrate mining any coin on X11 algorithm on my MSI R9 280X. What you’ll need is the SGminer, which is a dedicated AMD GPU and multi-algorithm miner, though it doesn’t support all algorithms. It’s true that you won’t be able to mine using Nvidia GPUs with SGminer, however we may cover that as well in another article, later on. Once you’ve downloaded the SGminer, which can be grabbed from or any other source, extract it somewhere on your hard drive. 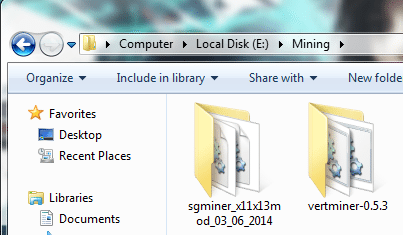 Setting up the miner:
Once you have the files, next comes the most interesting part, the process of setting up your miner. Even though you’ll get an “sgminer.exe” inside the package, which you’ll have to configure each time (if you run it directly), what you can do is to create a .bat (batch) file, with all of the preferred commands. To do this, open up the Windows application “notepad”, copy and paste the following command lines:

Save your new file as whatever.bat in the SGminer’s directory (don’t forget to select all files before in type before saving). You can create a shortcut for this on your desktop, for easier access, later on.

Consider the first two commands as a compulsory (if I were to elaborate more on that, it would extend the length of the article beyond that which is necessary). What you have to be concerned with are the “stratum+tcp://pool_URL:port -u Weblogin.worker -p password” commands. The pool’s url for coin, that you would be mining on (easily located in getting started page of any pool), and the coin’s port, goes into the third line after “-o” (discussed below). A single pool will have a different port than if it’s a multipool, so make sure to set the correct port. Next, you’ll need to replace the “weblogin” with your username on the pool and “worker” with the name/number of worker (I prefer and suggest to name the worker in numbers, as discussed below). After this, you will need to replace the “password” with the password you have created for the worker (not the pool password).

Joining and testing a pool:
Once you’ve come across the right pool for your coin, register yourself, and if asked for activation via email, proceed to do so. For demonstration, we’re going to use pool.trademybit.com, which is a multipool. Once you are in, head towards the “getting started” page, where you will find a URL in a similar way as mentioned earlier, in the command line example.

But before pointing your miner to the pool, test said pool’s pings by pressing the Windows key on your keyboard, then type “ping www.Pool-URL.com”. If the pool members have decent pings from your location, then proceed, or you can always choose another pool and create worker(s) there instead. A single pool might have different servers, so make sure to check them each out before moving on.

No need to be concerned about my pings, as I’m only demonstrating, and have streams running as well.

Creating a worker:
After you’ve found your most ideal pool, go to the “Workers” tab (different websites may have different names/templates, but most pools will have something similar), and once you’ve found where to create the worker, proceed to doing so. Name this worker something that you can differentiate and easily remember, i.e. “1” and password “x”. It is likely to be easier for you to remember workers in numerical names, however you may name them as if your pets, children or anything else really. This is completely up to your own discretion.

You will see a worker is created, with your username, on the website, along with the worker name “1” after the decimal point (.) and it’s corresponding password.

Prepare to launch in 5, 4, 3…
Once you’re done creating your new worker, copy the URL of the pool, along with the command line and port, from the getting started page, and replace it with the examples in the whatever.bat file that you created earlier. Now you are all set to start your miner with said file. But, one thing to note, is that this is just a beginner’s guide, and there are many different tweaks and tricks which can be done with your miner and GPU.

Get your miner runnin’, head out on the highway!
Now that you’re all set up, open up the .bat file and something like this should pop up:

What you should know is that the numbers directed by the Yellow Arrow is your GPU temperature while mining, the numbers marked by Orange Arrow is the power generated by your GPU and if your HW – as pointed out by the Red Arrow in this image – is higher than 0, then there is an issue with your CFG, however you shouldn’t see it go beyond 0, if you haven’t used the tweaked CFG.

Storing The Coins In Wallets:
The only thing left to do now, is to store the coins you are mining in a bank, which here are called “wallets”. All coins have different wallet, and these may be found on the coin’s official website, or on the bitcointalk.org threads. Once downloaded and installed, they’ll generate a wallet address for you, on which you can send & receive coins, but you’ll need to sync the wallet with blockchain (ahhh don’t ask) before you’re able to see the balance.

But Are Wallets Even Necessary?
Is it even necessary to have wallets for the all of the coins you’re mining? Well no, not really. Once you’re done mining, you will be trading all of the new coins into BTC, and thus you can send all of them directly from your pool to the exchanger, trade them for BTC and then get some cash. That being said, it’s actually better to have the BTC wallet on your desktop, rather than on a website that can disappear at any given moment, like what happened in Mt.Gox case.

So that’s basically how you set up a miner, for any coin in the X11 algorithm, X13 has a similar setting, which we will discuss in a later article. Let us know if you’re facing any trouble understanding the steps mentioned above. Don’t hesitate to share this amongst your friends, who might have an AMD GPU lying around and could easily turn that into some cold, hard cash (because who can’t use a little of that, eh?).

Notes:
SGminer doesn’t support SHA-256, Scrypt, Scrpyt-N and some other algorithms. Basically, it is used for switches between X11/X13 algorithms.
You can find out what to mine, as for the time, using some profitability calculator such as the one found at http://whatmine.com/
There are still quite a few tweaking commands that can be added in the .bat file, such as –temp-target, –temp-cutoff, –failover, –auto-fan, etc. Explaining all of these commands would just make the article long enough that it would become too long and boring to read. Basically, this article was written to give an idea on how to set up a miner and join pools, you can search the CFGs for your GPU online, or ask on forums, and replace/add them in your .bat file as you see fit, for the best performance.
Overclocking/Underclocking is a major factor that also affects mining performance, and once again, you can search in a search engine for/ask on forums about the best clock settings for your GPU on specified algorithms.
The performance gained, in the resulting image, was obtained by a further-tweaked CFG, but it doesn’t mean that the miner won’t run with the base cfg as provided above.
Original cfg:
setx GPU_MAX_ALLOC_PERCENT 100
setx GPU_USE_SYNC_OBJECTS 1
sgminer.exe –kernel x11mod -o stratum+tcp://east02.us.trademybit.com:3503 -u ahmy.1 -p x -I 20 -g 1 -w 512 –thread-concurrency 28500 –gpu-engine 1080 –gpu-memclock 1500 –temp-target 70 –temp-overheat 82 –temp-cutoff 85 –gpu-fan 65-85
Most of the miner works best with old AMD Catalyst drivers like 13.12, doesn’t mean they won’t run with the newest, but are best tweaked by the developers for older versions.
There are dedicated hardware for mining also, called ASIC which are far better than GPUs, but not all algorithm have ASIC and it affects the coins profitability as well.