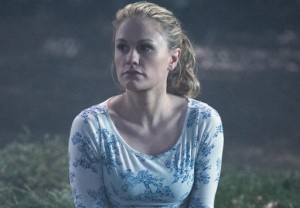 Pam is with Eric. She tells him she felt Tara die a true death. Eric shows little sympathy. We get a  flash back to France in 1986, where Eric is meeting a woman named Sylvie at a winery.  Their unneeded lovemaking is interrupted by Nan from the authority. She reminds him that vampires needs to stay out of sight. She also talks to him about a new synthetic drink called  Tru Blood and how important it will be for vampires.

Continuing the flashback, Nan sends people to take Sylvie and Pam.  Eric is given a choice in who he will save from being killed. This is his punishment from not following orders. He offers to sacrifice himself, but they can’t accept that, so he chooses Sylvie to die.

Back to present time in Eric’s room, Pam tearfully insists that Eric fight to live as a cure is trying to be made. He is refusing to fight, when all seems lost Pam tells him  Jason let Sarah Newlin live. This awakens Eric, who finally gets up from his chair.

We are now at a Yoga place where people are being mentored with yoga. the last person we see there is Sarah, who now has brown hair.

Alcide comes down the stairs and sees that that Sookie has run over to Bill’s house.  He shows up at Bill’s house as he followed her scent there but they have already left. In the car, Bill asks Sookie to take his blood in order to help her as he can no longer sense her from when he was drained when he saved all the vamps last season. His fangs pop out from her sucking, so she reminds him that she’s got a boyfriend.

Sookie sets herself up as “vampire bait” for the infected vamps and reminds Bill of the time he described her as such. She confesses that she really loves Alcide, but she is afraid that she doesn’t love him as much as he loves her.

We get a flashback of  Bill taking a family photo before he heads off to war. He takes one photo of just him and his daughter for her to keep and one of the whole family for him to take with him. ( The photographer’s last name is Fortenberry, a descendant of Hoyt’s blood line).

The H-Vamps finally show up with Holly.  They attack Bill, but Alcide, Jason, Andy, and others kill them quickly. Alcide argues with Bill for listening to Sookie. And just then, Alcide gets shot and killed by Lou, someone on Vince’s brigade. Sookie decides not to turn him into a vampire because she’s “been down that road before.” 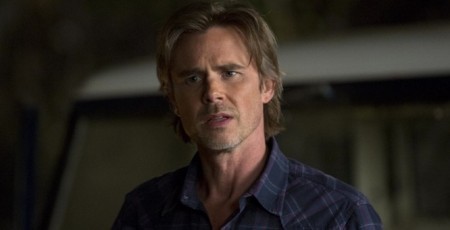 Willa lures Lettie Mae to the Reverend because she’s hearing her daughter Tara again. Sam who was with the Reverend leaves and runs into the townspeople, who are taking the town back. They are led by their new mayor Vince. Even Officer Kenya has turned against him. They shoot and kill the vampire that was assigned to Sam. Knowing that they will shoot him next, Sam turns into an owl and flies out of there. 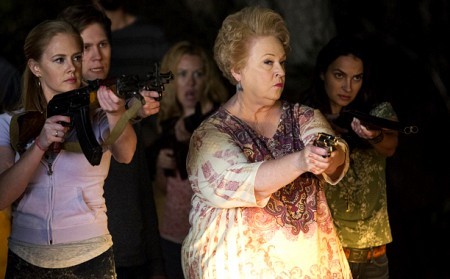 Adilyn and Wade are still in jail when Jessica and Andy come to save them.  Jason suggests to Violet that they start a family together in light of all this tragedy. She tells him he is acting like a girl. Andy, Jessica and Adilyn show up at his house.  The four adults team up to search for Sookie. They are stopped by the gang of people standing in the road all with guns. Its Vince and his crew. Maxine, Hoyt’s mom  lectures Jessica for breaking her son’s heart. Maxine shoots Jessica in the shoulder out of anger, which leads Violet to rip Maxine’s heart out. 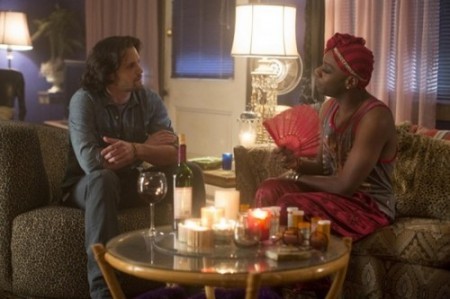 Lafayette who is at home drinking and popping pills gets  interrupted by James.  They talk about drugs from the past. Since James can not take pills anymore Lafayette takes a few and says he can drink from his blood in 20 minutes and get high that way.  James is questioning his relationship with Jessica. They ride the waves of a high which knocks Lafayette out cold. It scares James for a moment because he’s concerned he OD’d. He stops any physical contact from going further, reminding Lafayette he’s still with Jessica.

Sarah is having sex with her yoga teacher. She goes to grab a bottle of red wine, and the same people who killed Sylvie are now helping Eric. The yoga teacher refuses to reveal where Sarah is, so he’s killed. She can see the blood coming from under the door to the room she is hiding in.

It was a good episode. I had predicted that Alcide would get killed but thought it would be in Sookie’s kitchen. What did you think of tonight’s episode?

Photos are from imdb.com