Today I’m going to give you 18 things to know about the new GoPro Hero8 Black. I’m going to go into a little bit of the detail and stuff, kind of the under the covers, how things actually work on these cameras; and then we’ll talk about the good and the bad of these cameras. They are definitely not perfect and there are some things that I love and some things that drive me absolutely bonkers. 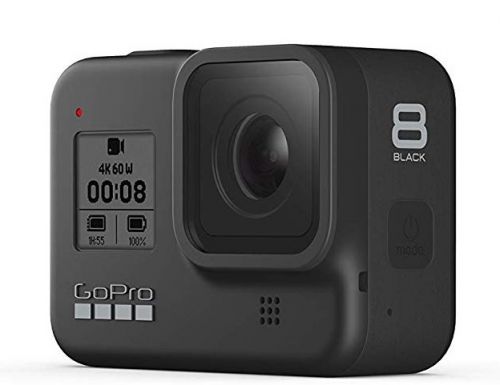 Also note that I have a ton of sample footage in this article, but I also have a dedicated footage video up there in the corner, that’s like ‘a’ extravaganza of sample footage; comparisons of four different cameras at once, all sorts of cool stuff there, so check that out as well, is the in-depth review that you see on the screen right now.

With that, let’s get into a bit of a freebie that is not included on my 18 things, which is the pricing on this.

The Hero8 Black is at $399, the Hero7 Black moves down to $329, the Hero7 Silver goes to $199; and then they’ve introduced the new Hero MAX at $499 which replaces the older GoPro Fusion 360-degree camera; still 360-degrees, and I’ll talk about that at the end of this article. If you want to spend less money, read about best GoPro alternative in 2020.

So, with that let’s get into number one on the list, which is the new frame, or rather lack thereof, the new case design.

So, in the past you had to put a frame around the camera in order to go ahead and mount it to a GoPro Mount. Now the mount is built into the bottom. It’s a small metal mount that unfolds outwards, so you can put it flat on the table without the mount … which is pretty awesome … or you can just simply pop the mount out and then attach it to an existing GoPro Mount.

It works with all existing GoPro Mounts, so if you already have mounts out there, that stuff works great, no problem. But it won’t necessarily work with all cases. So, if you had, for example, an underwater case, not so much there; if you have one of the rubber silicone type case that does actually fit around a camera, you just need to make a little hole for the mount at the bottom, but that’ll at least still kind of work. But if you’re one of the five people left still flying one of the GoPro Karma drones, that’s not compatible with this, neither is the Karma Grip Gimbal that came out at the same timeframe … at least not without duct tape. You could maybe kind of make it work, but it’s honestly not worth it anymore.

While on the whole this design is definitely an improvement, there are some downsides. Number one is that opening up this battery door is miserable, especially in the cold and kind of a windy scenario like up on the mountain. That really sucked. You have to put your fingernail down there and it’s easy to kind of … It’s not good at all.

The other catch is there is no smaller door access to the USB charger. You have to have the entire door. You can take this off if you want to, but then you have the battery just chilling there and it’s not really ideal; but that probably gets to the next one on the list which is the new GoPro Mods.

These new Mods, or accessories as the rest of the world calls them, basically extends the functionality of the GoPro itself from an integrated electronic standpoint.

Now, there are three Mods. The first one is the Media Mod, that most notably includes a shotgun mic, so it’s pointing directly at you, ideal for vlogging or any sort of like holding it out, holding it out type setup. It also has a 3.5 millimeter adapter in case you find that shotgun mic sucks. And then it has a USB-C pass through, so an additional USB-C port there as well as having a mini HDMI because this camera itself no longer has mini HDMI on it.

The second Mod is a flip up screen; so it’s a two inch screen that flips up off the back to allow you to see yourself, again, holding out in front of you. Again, really designed kind of for that vlogging scenario; anything where you want to hold and kind of walk and talk.

And then thirdly, there’s a new 200 lumen light as well that you can add to this whole entire kit.