From “I’m Not In Love” by 10cc that sets up the prologue to “Come and Get Your Love” by Redbone that begins the main story, the tone is set right from the start with Guardians of the Galaxy. This isn’t your everyday superhero film, though it does have all the characteristics of a Marvel one. Guardians of the Galaxy is contagiously upbeat right from the opening credits and keeps the mood light throughout. It has action, comedy, a little drama and a little, albeit slightly one-sided, bit of romance. Set almost entirely in space, in a galaxy far.. far.. away, this story follows five unlikely heroes towards a path none of them thought possible. Throughout the movie, this unexpected blockbuster, you’ll be taken through some exotic locations, meet some familiar faces and, even though you probably had no idea who they were prior to the film, you’ll be left wanting more by the end of it. 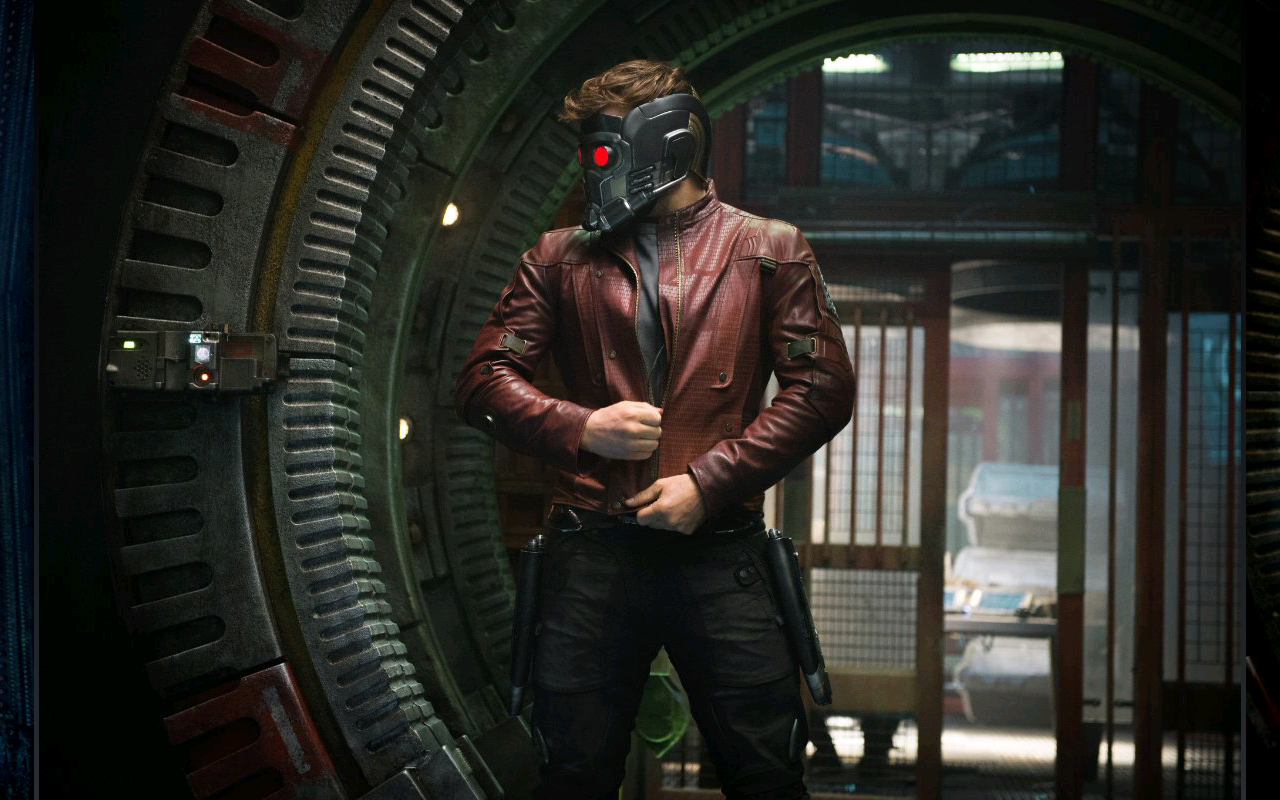 The movie starts us off with a young Peter Jason Quill in the hopsital. His mother, moments away from death, bestows a present to him and, after she passes, Quill runs outside. As he stops he is met by an alien spacecraft and abducted. Fast forward a few decades and we find, a much older, Peter Quill (Chris Platt) on an alien planet searching for an object that his captor-turned-boss Yondu Udonta (Michael Rooker) has sent him to find. Upon finding this orb, Korath (Djimon Hounsou), a henchman for Ronan the Accuser (Lee Pace), stops him and demands Quill hand it over. Star-Lord, as Quill called himself to Korath in an attempt to get his “outlaw” name substance, flees to his ship and escapes the planet. After a few choice words with Yondu, Quill sets off to Xandar to sell the orb and collet the reward himself. A less than pleasant meeting with The Broker (Christopher Fairbank) leaves Quill with the orb and no cash and outside waiting for him just so happens to be the beautiful but deadly Gamora (Zoe Saldana). She steals the orb and, after a brief fight ensues, the odd couple, Rocket (Bradley Cooper) and Groot (Vin Diesel) get involved. They get stopped by the Nova Core, Xandar’s army, and get shipped off to the Kyln. There they meet their final companion, Drax the Destroyer (Dave Bautista) who, after attempting to kill Gamora, agrees to join the band of misfits and breaks out of the Kyln. They set out to meet The Collector (Benecio Del Toro) in Knowhere, a giant severed head of an ancient sentient being floating in space, who wants to buy the orb from them for his own collection.

From there, our heroes are caught in the middle of a war they didn’t even realize they were apart of. Yondu and his forces are bearing down trying to grab Quill and the orb for their own personal gain. Ronan and Nebula (Karen Gillan), Gamora’s sister, have shown up and are will destroy anything and everything in their path to obtain the orb for Thanos. Things start to go wrong after a brief chase has Gamora floating in space, dying, while Nebula steals the orb. Quill contacts Yondu in hopes he can capture them, which will also save them, and flies out to Gamora to attach his helmet to her. Rocket reunites with Groot who has just revived Drax and they decide to rescue Quill and Gamora. This sets up a rather explosive end. Mix in a few death threats, explosions and some lovely speeches and you have just the right combination for an ending that, not only acts as a great conclusion, but also sets up the sequel perfectly, which was announced before this was even released. 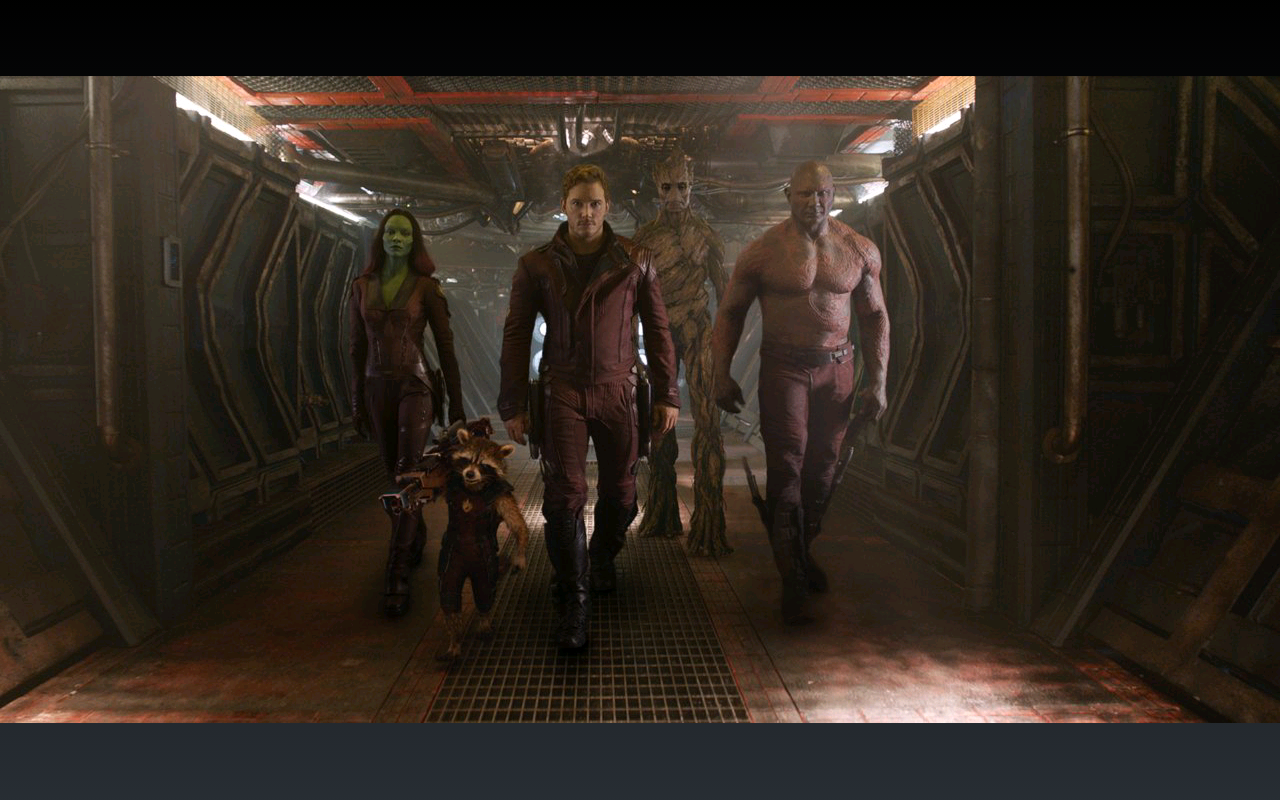 I was a little nervous about the casting, to be completely honest. I always feel like if you jam pack a movie, especially one where there’s so little known about the cast, setting and director, with a huge list of stars, you’re going to have a bad time. However, I was pleasantly proven wrong. Chris Pratt was a perfect fit for Star-Lord. He is very charismatic and his sense of humor is one hundred percent on point. Zoe Saldana does her thing as Gamora. She is starting to get type cast as the badass female lead, but who can blame them. She kicks ass in basically everything she does and she doesn’t disappoint here. I was torn on Dave Bautista’s acting. It’s quite terrible but I think the writers did an amazing job working around that by making his character oblivious to metaphor’s and making him seem like a bit of a moron. Bradley Cooper’s voice-acting is funny at times but I think it could’ve been done by any number of actors and, unfortunately, Vin Diesel got to say a grand total of four words about a dozen times. He got to grunt and scream a little too, but I didn’t care much if Groot spoke at all. Lee Pace continued his nice outings in this one. I enjoyed him in the Hobbit films and I enjoyed him here. The one red flag in this one was Karen Gillan. I didn’t like her character and how she portrayed her at all. The weird yelling, the intensity where little was needed and that silly stomping around she did was just rather off-putting for me. All the other small roles played by actors such as Glenn Close and John C. Reilly were nice and didn’t take anything away from the main cast.

I thought the visual effects were amazing. I saw this in IMAX 3D and I was definitely not disappointed. It was vibrant and blooming with color. Every location was beautiful and unique. I especially enjoyed Knowhere. The floating head was terrifying and mesmerizing at the same time. It was really the most brilliant depiction of what life would be like outside of Terra, or Earth,  that I’ve seen in quite some time. Some of the 3D moments and the slow motion effects I could’ve done without. The slow motion running by Groot and Rocket was just silly. I did enjoy some of it but it’s been done so much now I’m really quite over it. Xandar was another place I particularly enjoyed. The towering mega structures mixed with the water parks and shopping structures made it seem futuristic but something I could relate to. I can definitely see myself on Xandar walking past those huge, towering buildings on my way home from a long day at work. 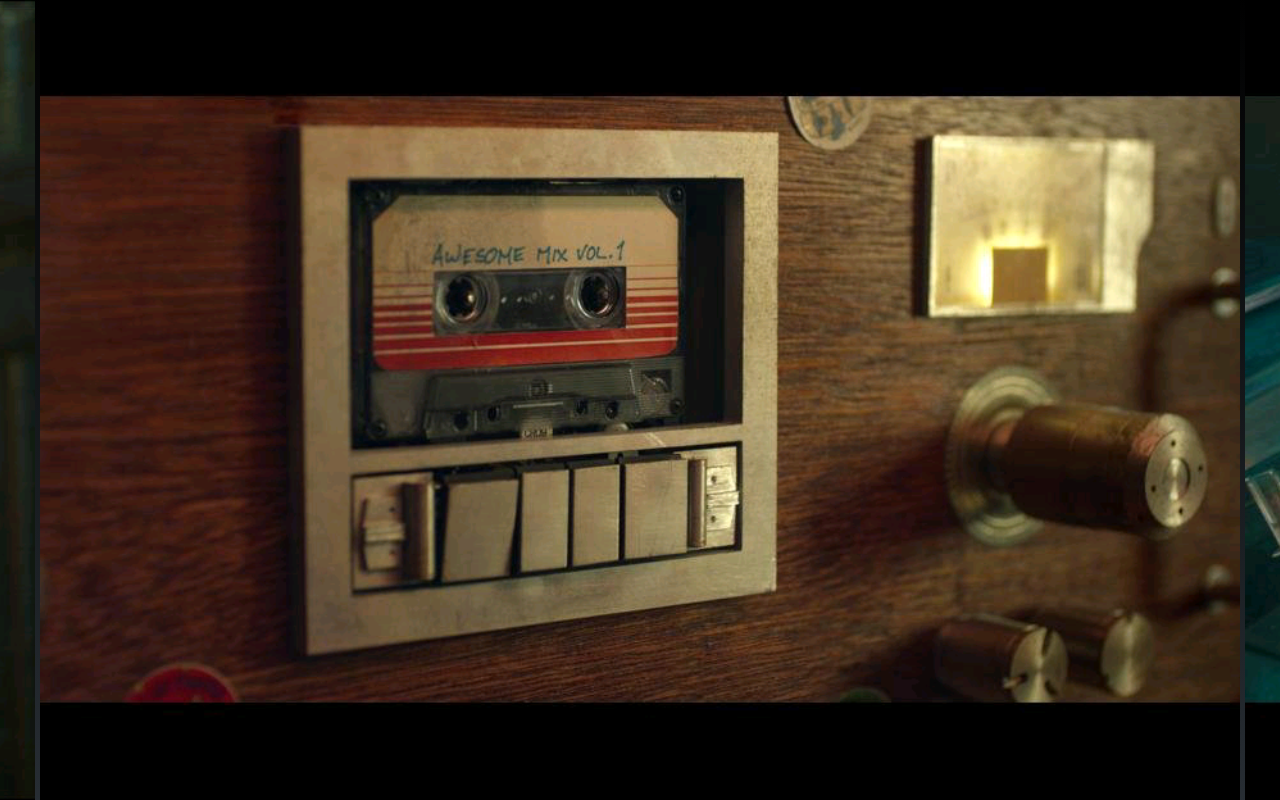 When everything is said and done I can honestly say this is my favorite Marvel movie to date. It was my runner up for best movie of 2014. For a movie that you almost felt like you were thrust into halfway through, not knowing anything about the characters or what was even going on, I still felt satisfied on nearly every level. James Gunn, who has directed Slither, Super and Movie 43, none of which were that great or entertaining, has definitely flung himself into the spotlight with this fantastic movie. While I don’t think it was quite the “Star Wars of our time” I do think it has definitely been cemented as one of the best space-set films in the last decade. The acting was top notch, the visual effects were out of this world and the story was pretty straightforward. I also think that the soundtrack for this movie was outstanding. I’m not a huge fan of 70’s music but “Awesome Mix Vol. 1” was perfect. As soon as I heard it for the first time, I picked it up. It really set the mood throughout the entire film. While, it isn’t flawless, Guardians of the Galaxy is immensely fun and enjoyable for the entire family. It’s not too dark and doesn’t take itself too seriously. I give Guardians of the Galaxy an 8.5 out of 10.

I’d really like to hear from you guys. What did you think of the movie? Did you like the casting choices? Are you interested in how they’re going to be mixed in with the Avengers? Let me know in the comments below.

Don’t forget to get your copy of Guardians of the Galaxy today!