Gugong is one of the games that I have to praise the production team for how well they researched the historical and cultural contexts. The game’s profundity is expressed throughout many different elements. It ranges from the items on the gift cards, the usage of Jade, to the actions and especially the exchange (or bribery). 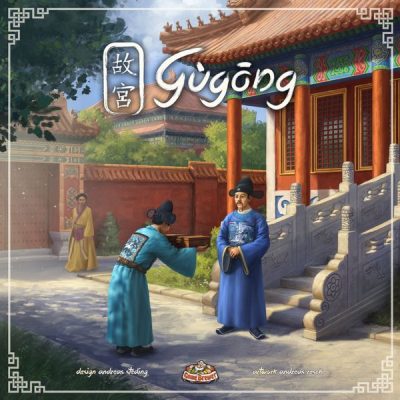 An historical overview through Gugong

Gugong takes place in 1570, during the reign of the Longqing Emperor (1566/1567 – 1572) of Ming dynasty (1368 – 1644). Each player takes the role of powerful Chinese families. The main’s objective is gaining the most influence within 4 days (or 4 rounds). In order to qualify to win the game, the player has to greet the Emperor in the Palace of Heavenly Purity by the end of Day 4. Otherwise, they score zero points.

The game’s main mechanic is swapping cards with Officials at the location where players want to perform the specific action. Needless to say, each official allows players to carry out unique actions. There are a total of 7 actions on the board: Traveling across China to collect tax for the Emperor, getting Jade, building the Great Wall, cruising the Grand Canal, increasing Intrigue points, following the Decree to gain some advantages or approaching the Emperor in the infamous Palace of Heavenly Purity. During the gift card exchange, the player has to trade the higher value item for a lower one (exception of 1 for 9). However, players can either remove two servants that they currently have, or discard another item, or exchange without performing location action; when they exchange an item that has equal or less value than the one at the location. 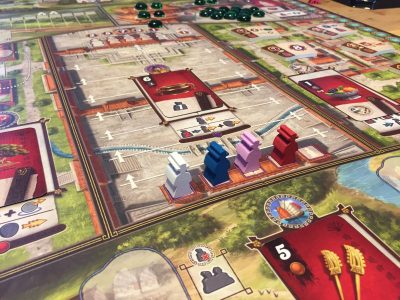 Moreover, some of the cards have the bonus action as well. In other words, players might be able to execute two actions in one exchange session. One is from the card and one is from the location that player exchanges the card with. When all players run out of their gift cards, the round enters the night phase. Players will be able to add more servants to the pool, if their gift cards match with the Destiny dice.  Afterward, players who have the most matches can also move their Envoy one step closer to the Palace of Heavenly Purity. Subsequently, players move all their ships in the Grand Canal one step forward.

A comprehensive historical representation of the Longquing reign

Besides very straightforward mechanics, Gugong also offers an adequate amount of cultural and historical contexts via many components of the game. First of all, it is the fact that Longqing inherited the country in a state of disarray, due to the mismanagement and corruption at the reign of his father, Emperor Jiajing. As an effort to clear out all the eunuchs and employ competent officials to the court. As a result, bribery was strictly forbidden under his reign. That’s why players can only carry out actions by exchanging the goods with higher values. The good selection and their values deserve the praise as well. Possessing the Imperial Ink Seal would provide the Officials a lot of power and authorities. Hence, it totally deserves a value of 9.

However, the best good selection was the Porcelain. The Tang dynasty developed Porcelain, but the Ming perfected it. It was also one of the most loved-exported products back then. Another example is renovating the Great Wall of China. During his reign, the Longqing Emperor did renovate the Mutianyu – a section of the Great Wall – in 1569,  after being penetrated by Altan Khan. One of the most outstanding component selections in the game is the Jade. It is also called “The Stone of the Heaven”. It symbolizes prosperity, success, and fortune. Hence, the more Jade players collect, the more Victory Points they will earn at the end of Day 4. 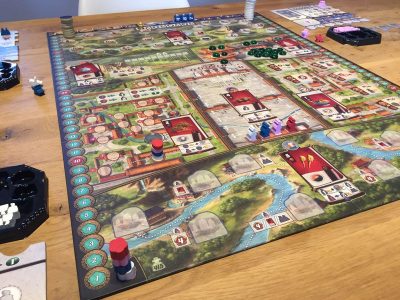 Even though Gugong did a fair job in bringing an unconventional way of worker placement (exchanging gift cards to carry out action) along with the massive amounts of historical and cultural contexts, the game lacks direct competition, and can become a little bit dry later on. Blocking other players to carry out action is not always worth it. Since there are too many workarounds and they are not as challenging as the effort to block it as well.  If solitary is your cup of tea, then Gugong is definitely worth a try. 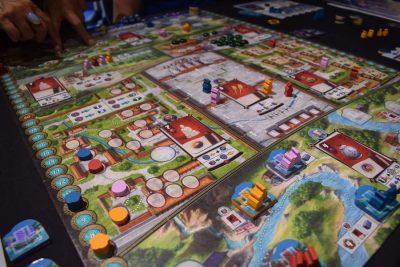 You can purchase Gugong at this link