On Wednesday February 13 at 3:30 PM PST HAWKEN staff member Hugs joined a discussion with several players from the competitive community.  Click on the image below to listen to the whole broadcast by The Cockpit or read the highlights we compiled of Hugs’ most important answers with very minor edits for clarity.  Each highlight has a timestamp placed next to it if you want to hear Hugs elaborate even more on the subject. 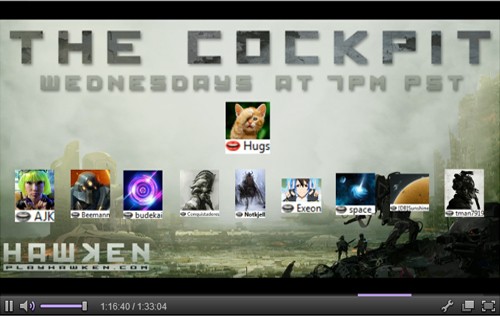 I’m not sure exactly how much people know how our whole system works. Basically half our team is up in Seattle and half of our team – mostly the developers – are in Pasedena down at Adhesive. That represents challenges for communication and making sure who’s on what page.

We talk to each other all day. We have our own little intraoffice chat client that we’re always talking on. Basically, anything that you can use to communicate with somebody using a computer – even sometimes old school with phones.

There were just some things that were being miscommunicated and a couple things weren’t addressed correctly. Plus that patch came in super hot – these are all excuses – we kind of took it in a sort of post mortem way. We had to figure out where did we fall down in that particular regard and we’re trying some new systems to prevent that from happening on the level it did.

The Problem with Specific Numbers and Values

Releasing numbers is a very contentious issue internally. Part of what we have to struggle with is making sure that our community – like you guys the hardcores – are getting the info you need to give us feedback but also we need to be careful with the info we give you.

Sometimes we make changes to one thing and it’s really meant to help something else. It’s not that we’re trying to hide those changes. I’m just speaking in regards to specific numbers. We’re just not at a point that we’re ready to release specific numbers. We’re looking into happy mediums there to make sure you guys are happy as well. But right now we’re just not at the point that we can do that.

Weapons balancing and loadouts are something we are constantly looking at. I think in the near future any changes you see are mostly going to be on the new mechs. It’s similar to how we’re trying out the camos. We’re building out a system so that we on our side can more easily change out what you can equip and what you can’t.

The reality that we deal with on our side is that implementing such a thing requires changes to some very core systems.

I love that idea though. In a dream world where we had a team of 500 and millions of dollars this is the game we could make. The reality is we’re just a tiny team and we’re trying to get the game onto a really solid ground floor so we could build cool stuff like that onto it.

Rumors in Regards to Mini Versions of All Weapons

We all hear things. That’s something that happens on the internet. Am I being vague enough?

We have some big plans for matchmaking and in the next few weeks you’ll see the beginning of that.

Jason Hughes mentioned a few weeks ago that private servers are definitely something we want to see. It’s hard to balance providing those with getting the population rates we need to really hone our matchmaking.

Nope, there are no plans for that.

Current State of eSport in HAWKEN

Eventually Siege is one of modes we see as potentially viable. Most of the game right now isn’t tuned or honed for eSport at all. This is our beta, so it’s time for us to experiment.

Whatever you see now is probably a piece of one of the designer’s experiments to see: “Well moving this lever accomplishes that.” So that’s where when you do have feedback and thoughts on what would make it competitive or specifically what aspects of Siege that make it totally untenable – I love it, I love to see it posted on the forums!

We’re working on lots of different stuff. The team is working on several different maps now and down the line when we’re ready to get out there with a more targeted competitive agenda – you’ll definitely start to see some changes on the map.

I don’t think that our team has the bandwidth to create an alternate version of the game right now or in the future. I just don’t see the team having that. Instead we’re looking at various features we can add so that players have what they need and can kind of select what they want to play and how they want to play it.

Right now we’re doing it all ourselves. We are looking at different partners. I better not name anything because we don’t have any contracts signed. We are looking for partners to help us with coverage – we’re in talks with various providers.

At first what we’re looking at is supporting user created competitions – being able to support individual ladders and specific smaller tournaments.

I think that’s something we’ll look at very closely when we have many more months than two under our belt. It is something we are aware of though.

Upcoming Events that the HAWKEN Team Will Attend

The Most Important Question

Will You Be Warpig’s Valentine?

Sure I will so long as it’s nowhere in the state of Washington…I’m just joking!

Hope you found these highlights helpful. Stay tuned for future talks with Hugs and the rest of the HAWKEN team soon. Thanks again to AsianJoyKiller for arranging them and The Cockpit for streaming them!