Dragon Blogger currently is using a legacy WordPress framework that isn’t really found in the WordPress archives before and I have been trying to work on a redesign with a new theme, this is because my current framework is not dynamic and my pages don’t render differently on mobile devices or tablets as they should.  I was compensating with the WP Touch Pro WordPress plugin and theme combo which does render a more mobile friendly version of the site, but it is another plugin and doesn’t have the exact design I want for mobile devices.  I also was having some performance problems on this WordPress site and after doing a lot of investigation and working with my web hosting provider I determined that most of the issues are caused by the very high number of plugins I had on my site.

Some of these I really needed but I leveraged P3 Performance Profiler to find the big culprits that were hitting performance and wouldn’t  you know it the Header/Footer plugin I was using was 60% of the performance impact to page load times, so I simply moved the header scripts into the theme php files directly and removed the plugin gaining a huge performance boost for the page load times on the site, particularly this was noticeable for my editors and writers who were getting frequent 502 errors accessing resources that had to query the database. 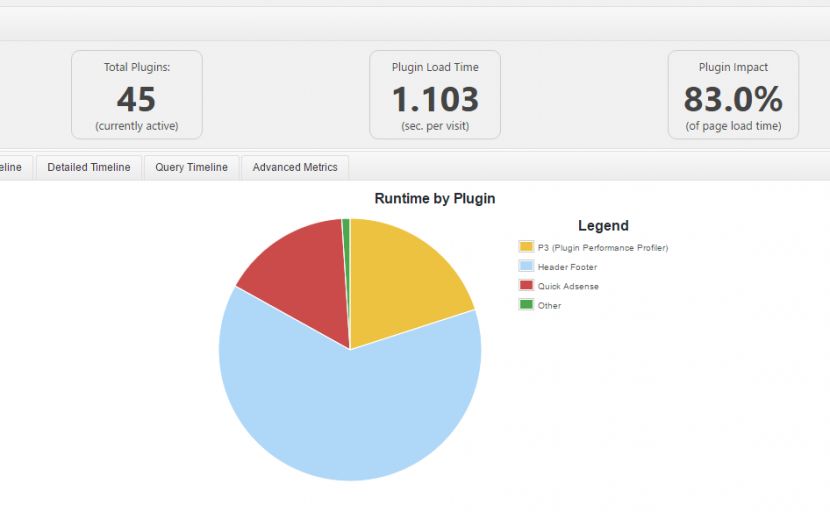 As you can see in the image above header footer plugin which was only used to load a few scripts for ad code was accounting for 63% of my plugin load time and itself added almost .7 seconds to my page load times.  Removing this one plugin had a pretty meaningful performance benefit for my site immediately.

I also had a whopping 179 SQL queries on page loads, which is a tremendous amount of overhead to load a page.

I got this trimmed down to only 85 SQL queries and plugin impact dropping around 30% after removing this plugin which helped quite a bit improve my pingdom tools timing results.

I know from experience no matter which web hosting plan you are using whether shared web hosting, dedicated, VPS or what not, the more plugins you are using on your WordPress site the more load and resource utilization the site will take and you will have performance degradation.  Caching plugins like W3 Total Cache can only help so much if you have other PHP plugins that execute and have to run and render a result each time a page is viewed.  The only oddity I saw with P3 Performance Profiler, is even after I removed the 1 plugin, I only had 44 plugins remaining, yet it still showed 45 plugins, so even though P3 Performance profiler didn’t see it, the count never updated to reflect it was removed.

What plugins do you run on your WordPress site, which are essential for you and which ones did you find had performance issues and had to remove?  I want to hear your WordPress stories.