This is going to be my first brief PC game review here for DragonBlogger.com, and instead of starting with a Triple A title I had the opportunity to start my game reviews (there will be more hopefully) with an indie title called “Why So Evil” which is developed by Zonitron Studios and published by Grab The Games, a well known community on Facebook that search outs the best deals available on games and do some awesome giveaways.

A little bit about the developers, there seems to be only two active members in the team and Why So Evil is their very first game . Why So Evil is a puzzle game where you play as a Green Cube (don’t know why it reminds me of Green Lantern though I don’t even watch it) that must meet with the Blue Cube which is the objective (seems pretty easy right?) but there are a few obstacles between Green and the Blue cube that you must pass before you could reach the Blue Cube. Something I really liked about the game is the title for it is precisely accurate regarding the gameplay, Why So Evil!

Without further ado let’s start the review with Soundtracks. I have to say, it was a let down on the soundtrack as there seems to be only 2 background songs that interchanges with each other after a few minutes into the game. Only if you aren’t concentrating on the game, you’ll get easily bored by the soundtrack. I consider quality soundtracks as a “must” have for any game that needs to stand out today where anyone with a little bit of knowledge can produce a game. Personally I had the in-game music muted and was listening to my playlist on soundcloud.com.

Again not so much appealing if you don’t already play some old school or retro-style games. The main board or you can say the platform and the obstacles do change its designs and colors as you progress through a few levels, and they do match the theme most of the times. There are also some levels where you have to see through fog and flames to pass it or even a giant vertical wall blocking the view, which was actually good to see. 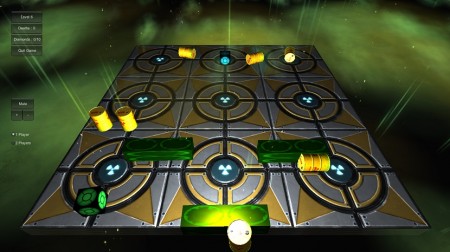 There’s not really much to talk about the graphics or the soundtracks, but where this game stands out is the gameplay. There reason I said the game perfectly matches the title is because the game becomes really hard after a few levels and sometimes it makes you want to rage quit, or even hammer your keyboard with your head (almost did that!).

As mentioned above, you play as a Green Cube, but what are the obstacles you say? Well it’s just some moving or rotating or even chasing cubes that if you touch or get dragged away by them from the platform, you die. Ohhh but wait, that’s not the only way you can die, there are some portals that if you touch, you would spawn either out of the board or in really difficult situations/positions. Here’s some advice, if you get spawned out of the board, try to maintain your moving velocity and aim your cube towards the board.

Well there’s more, if you manage to cross about 25 levels, the level design becomes too complicated and hard that sometimes your only options is to move your cube either left or right, or forward or backward at a time otherwise it’s confirmed call to your death. Oh and once again that’s not all, some levels are designed so smartly that you’d think you have completed the most difficult part of the level, just to see yourself being dragged away by a normal White Cube off the board the very next moment.

There are a few things you should know about the game before starting it since it doesn’t have any kind of tutorial or description about other cubes which actually make the game more difficult. So let me break it down.

But all of this information is based on how far I’ve played the game, so there may be more kind of cubes and traps out there. And no, I was not able to complete the game. I was only able to get to level 30 or 31st out of 50 levels before rage quitting it (yup, it happened). This is the second game in my whole life in which I had to rage quit; first was CS:GO where all my teammates were noob. If you want to feel what a gamer’s rage quit feels like, give this game a try but with extreme precautions as you might be risking your hardware. 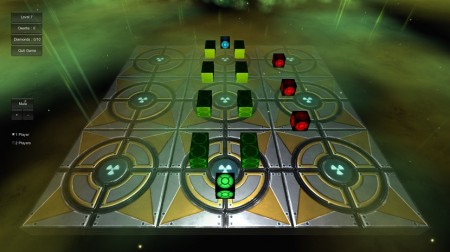 Getting back to the gameplay, there’s reason why I couldn’t go any further. The level where I was stuck had a path where you could only move either backward/forward or left/right as mentioned above, seems pretty easy with a cube right? Well it would have been that way if only the cube wasn’t slipping on the platform. Yes, the cube is actually slipping on the surface throughout the game, unless you provide enough velocity that the cube starts to roll. There were some levels which I completed without even rolling the cube, thanks slipperiness! I’m not sure if the developer created the game like this, or it just happens to be in the game somehow but if it’s by the developers, well played.

Concluding everything, I very much like the idea of going with a Cube which makes it much harder and unpredictable to move instead of a circular ball which would rather make it rather easy; Oval is another thing. There are some levels where there were actually two floors, but you can’t see it clearly because of the viewer’s angle of board. You can’t really differentiate between the floors unless something moves below it.

There is a total of three modes in the game (Practice, Noob and Normal) that doesn’t really work when you click on them on the UI after the first level, and also the UI is pretty basic or just like a normal Unity menu. Personally I think that just adding a few good quality soundtracks, a remake of the UI, removal of the slipperiness of Cube and a better viewer’s angle would win this game the “Most Rage Quitted” game of the year award. It’s meant to be a rage quitter by the description. And ohh the 2 player mode is just awesome if you’re looking for a reason to beat your friend when he messes up.