One thing I really enjoy is looking up at the moon at night, and when it is bright and full, or nearly full, taking a picture of it. I do not stop at just one but take dozens. I keep looking to take that one prize-winning shot that will go viral if posted, though much of the time, they stay on my computer and never get seen by anyone but myself, and a few of my Facebook friends. Still, that does not stop me from taking close up pictures of an object some 250,000 miles from where I stand, plus or minus a few thousand miles.

The trouble with taking photos of the moon is, it sometimes does not rise until after I am asleep, or it sets before it gets dark enough to really see its beauty. Don’t get me started about the clouds, they seem to always show up when the moon is at its best. Well, at least that is how things used to be. 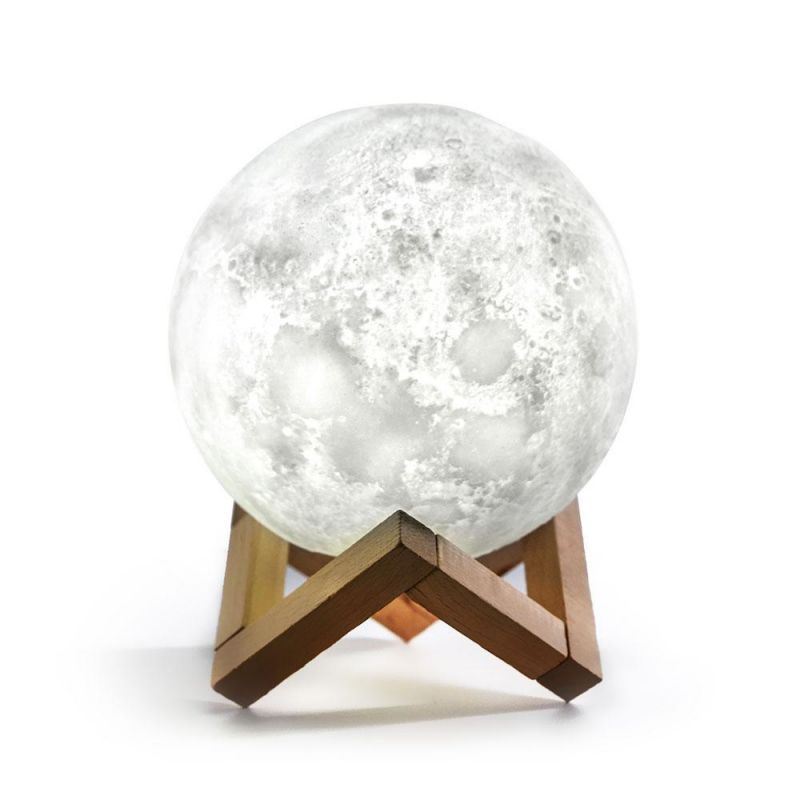 LOFTEK, a company I have done business with before, sent me their 3D printed Moon Lamp, with touch controls to test out. The lamp is a 7-inch model of the moon, and after I took a few pictures of the lamp, and compared it to a photo of the moon I took, they are almost identical. In fact, it doesn’t just look like the moon,  I can touch the lamp, and feel the surface texture, and know when I am touching a crater or a ridge. It is amazing.

When I took the lamp out of the box, I found no instructions, but quickly figured out just what needed to be done. The stand comes in 3 parts. All 3 are “L” shaped, with a hole and a peg on opposite ends. Fitting them together created a stylish stand with 3 points to support the globe, and 3 to rest on the tabletop. The lamp itself has no moving parts, or visible switches, other than the button like spot on the bottom where the lamp can be plugged into a USB charging cable provided. The cable can be attached under the lamp, while it still rests on its stand.

Charging time is about 1 hour, and the light lasts for about 10 hours. More if the light is dim, and less if it is bright, but according to the technical department at LOFTEK, the difference in time is hardly measurable between dim and bright. In addition, there are two types of light. One is a yellow/orange color, and the other is a white light. Each can be raised or lowered from dim to bright depending on need.

You will notice I have included some photo’s that are not white, nor yellow. For those, I used filters so that the texture of the lamp could be seen more clearly. Since the light is illuminated from within, the camera had some difficulties fully reproducing what the human eye was able to see unaided. I wanted my readers to be able to appreciate the full beauty of this lamp the way I am able to do so. One thing to note, the detail shown on the lamp, was verified for me when I compared the lamp to a picture I took of the side we see when looking at the night sky. I cannot personally say the same for the other side. Although it too had features I would expect to see, and some I would not. I have no doubt that it too is patterned from actual Nasa photos as well.

If you would like to get one for yourself, try these two locations. Amazon LOFTEK

Ok, so would I recommend this lamp to you? 100% yes. It is easy to set up, fun to look at, and the light is bright enough to read by and dimmable enough to make for a great night light.

Disclaimer: While LOFTEK did send me this 3D Lamp to review, all opinions in this review are 100% mine and mine alone.