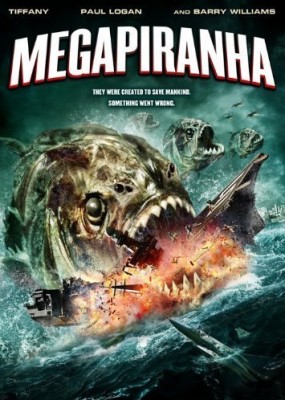 Asylum.   Usually, that word brings up scary images often used in horror movies.   For sci-fi fans, though, Asylum also means a direct-to-video movie production company that brings cut-rate films to the public at an astounding rate.   Many of these movies are sub-par monster movies although they also produce ‘Mockbusters‘, alternative versions of major motion picture releases that come out on video on the day a major movie premiers in theaters (‘Transformers‘ becomes ‘Transmorphers‘, etc).   Now my opinion of Asylum films has not been good.   So many of their movies take themselves too seriously, are filled with horrible dialogue, and have cheesy CGI effects that mostly make me chuckle for all the wrong reasons.  Recently, though, on Syfy network, I watched a movie that started out badly but, by the end, had me laughing so hard it hurt and enjoying myself immensely.

That movie, which is now available on video and the reason for this review, is Mega Piranha!  Now its possible that Asylum turned a corner in their film-making and I hadn’t noticed yet and it could be that this was just a happy mistake, but the end result was funnier to me than many of the comedies I’ve seen in recent years.   It was obviously intentional, since many of the best parts were part of the script, not just bad acting! 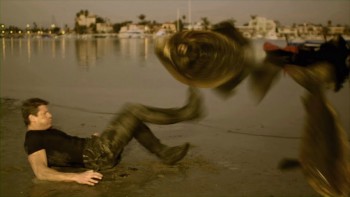 The plot (I’d warn for spoilers but the video cover itself reveals all of this) is simple:  scientists working in Venezuela breed genetically enhanced piranha that get out and begin chomping people.   Pretty pedestrian, right?   Well these special piranha aren’t just any old mutant fish!   They can survive by osmosis, drawing nutrients right from the water!  Which doesn’t explain why they keep eating people, but you gotta go with it.   These fish also continue to grow and grow and grow!  Our heroes Jason Finch (Paul Logan playing a GI Joe team member with a special bicycle kick piranha defense action move) and Sarah Monroe (Tiffany…yes, THAT Tiffany, former ’80’s pop singer who plays the scientist that does NOT want to save her experiments despite the death and destruction) certainly have their hands full.  And yes, that is Barry Williams, formerly Greg Brady on the Brady Bunch, playing Bob Grady  (everyone together now…GROAN!).

What makes the movie so enjoyable for me is that they went all out with the CGI killer fish.  I mean, I was so astounded by what was going on that I didn’t care how bad the effects were.  It was when the giant piranha launched itself out of the water and IMPALED ITSELF ON THE SPIRE OF A LIGHTHOUSE that I realized that they were going as over the top as they could.  Yet the actors do not ham it up like we’ve seen in too many tongue-in-cheek parodies.  They seem to be totally serious throughout the film.

Simply put, you don’t want to put this into the DVD expecting to get scared or for good science fiction.  This is like a Godzilla movie without a central goofy kaiju monster.  And its educational!   You’ll learn that you can scuba-dive into a South American river and find coral growing!   You’ll find that parts of the South American jungle look sandy and dry with just a few trees in the way!   You’ll even learn that giant fish can swim from Central America to the Florida Keys in just a couple hours!  Take notes, kids!  You’ll ace that test at school with no problem!

Obviously, this movie isn’t for everyone.   If you just don’t like monster movies, then you won’t enjoy this at all.   Likewise if cheap CGI makes a movie unwatchable for you, this may not be for you.   If you enjoy monster movies, cheap horror movies,  movies that are so bad they are funny to you (MST3K’ers, UNITE!), then you have to see this movie.  Just remember that almost every time the fish show on the screen, they do something outrageous and it just gets more and more absurd as the movie progresses…and that’s what makes it fun.  Lord knows it’s not a good movie, just one so over-the-top I couldn’t help but laugh!