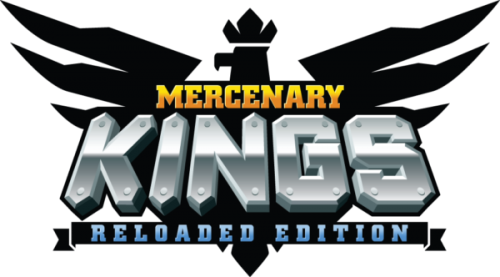 I have always been a fan of old-school side-scrolling shooters of which my favorite is Metal Slug. There is just something about a game that has that Contra feel to it and this is exactly what Mercenary Kings: Reloaded, by Tribute Games, gets exactly right here.

The game features you playing as one of four mercenaries sent out on missions in a central hub ala that of Monster Hunter where players can receive new missions, upgrade their armor or craft new guns and melee weapons. One of my favorite melee weapons is a pizza cutter, yes that’s right, a freaking pizza cutter that you can use to slice your enemies with. The game is very heavily loot-based so while you are out on a mission you will be busy collection different types of elements and parts to help you be able to craft better weapons and even upgrade your armor.

The game features over 100 levels each with their own unique mission whether it be rescuing a set amount of soldiers or trying to take out some pretty enormous bosses. There is a ranking system which basically has you ranking up which seems like the only way to rank is finish each ranks final mission. The game also supports local co-op and online multiplayer up to four players which I personally love since most games these days don’t seem to support local couch co-op. However, that is where this game shines. The co-op is quite the fun experience and most definitely makes the game a lot more enjoyable.

Mercenary Kings was originally released back in 2014 and available only on the PC and PlayStation 4. The reloaded edition which released on February 6th brings forth more guns and a few new characters that were not originally available in the original release. Plus, gamers on the Xbox One, Nintendo Switch, and PlayStation Vita will now be able to enjoy this game as well.

If you are looking for a game that combines loot, guns, local co-op and some old school Metal Slug type gameplay then I highly suggest checking out Mercenary Games as it does a fantastic job at providing hours upon hours of fun for anyone to enjoy.

Get Mercenary Kings Reloaded for the Nintendo Switch