We’ve been doing many peripherals review including mouse, keyboard, headphones lately, but so far, we haven’t done a review of a mouse that has support for up to 10000 DPI. So today, we are going to take a look at the Mionix Castor, a fully ergonomic 10000 DPI optical mouse.
Mionix is a German peripheral manufacturer that includes mouse keyboard and headphones. Mionix Castor is their latest take in the gaming and high resolution world. Well where else would u use 10000 DPI :D.

The CASTOR is a premium 6 button multi-color optical right-handed ergonomic gaming mouse. The unique shape has been developed to be used by right-handed gamers, and to equally support palm, claw and fingertip-grip. The mouse has a dedicated pinky- and ring-finger support-groove which makes it most comfortable to hold and lift.
The PMW-3310 gaming grade optical sensor has no positive or negative hardware acceleration, amazing accuracy, smooth tracking, and a maximum speed of more than 5.45m/sec (215 IPS) all the way up to 10000DPI. It is the choice of the world’s top pro-gamers and widely considered as the best gaming sensor currently available. 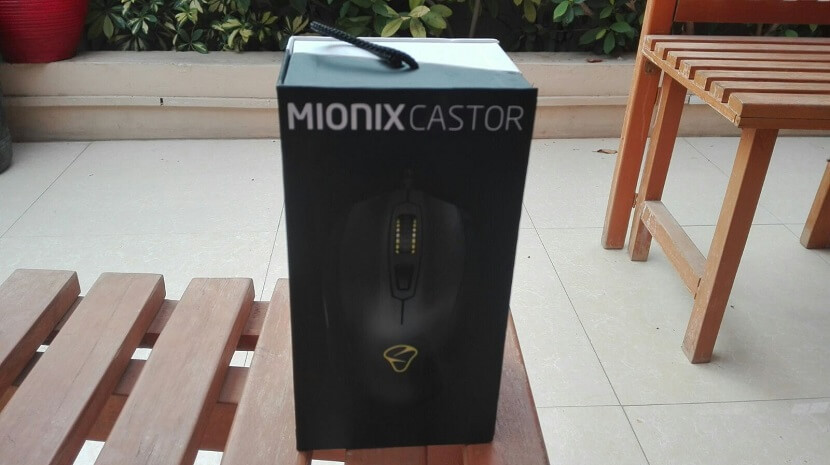 So we get the Castor in quite a heavy rectangular box. The front of the box has an image of the top view of the mouse while and just the name of the product. 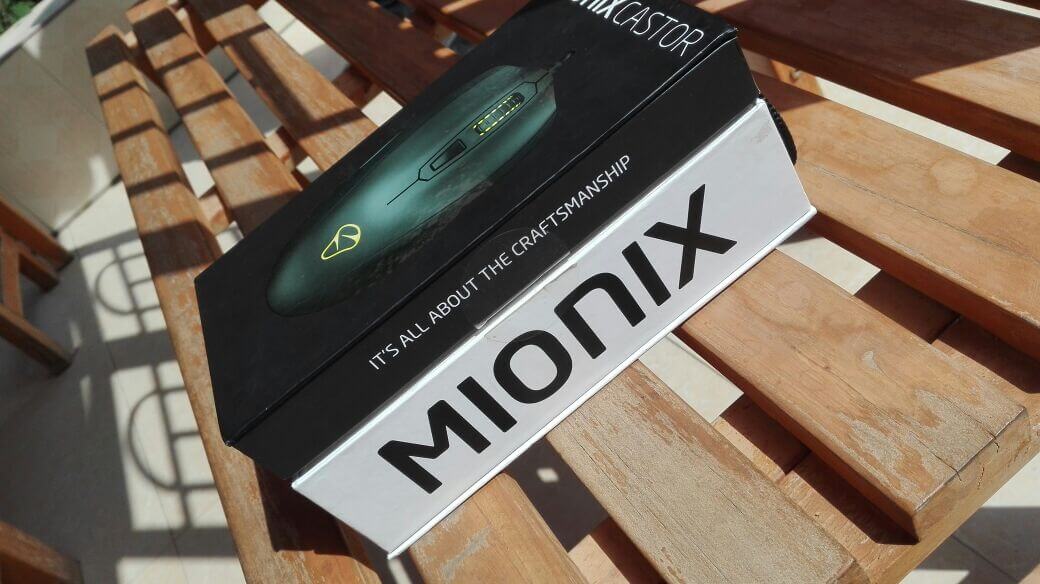 Mionix has gone with the tagline “It’s all about the craftsmanship” for the Castor that’s visible at one side of the box. 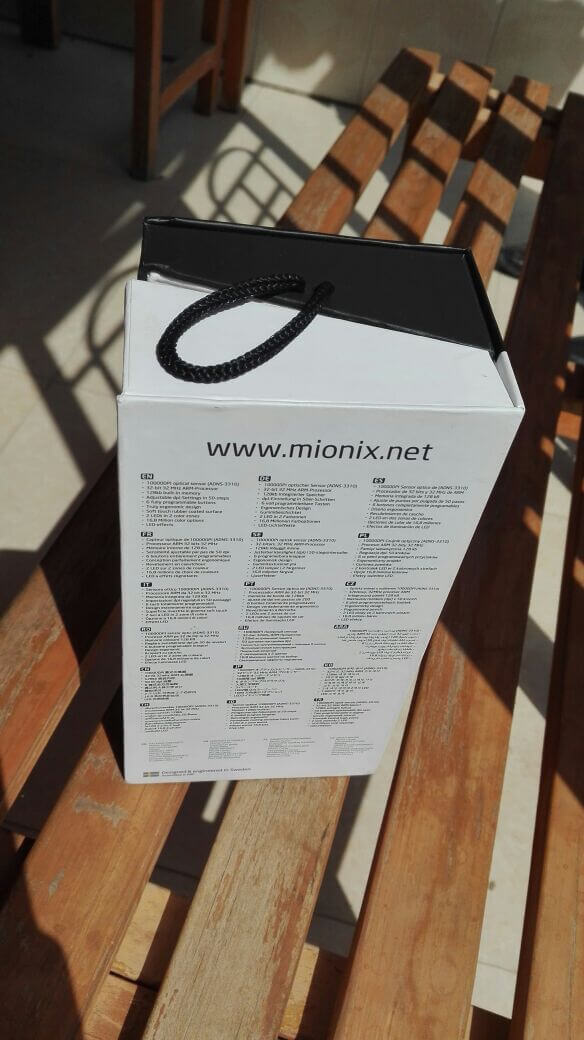 While at the back of the box, we have the detailed specification of the mouse in multiple languages. 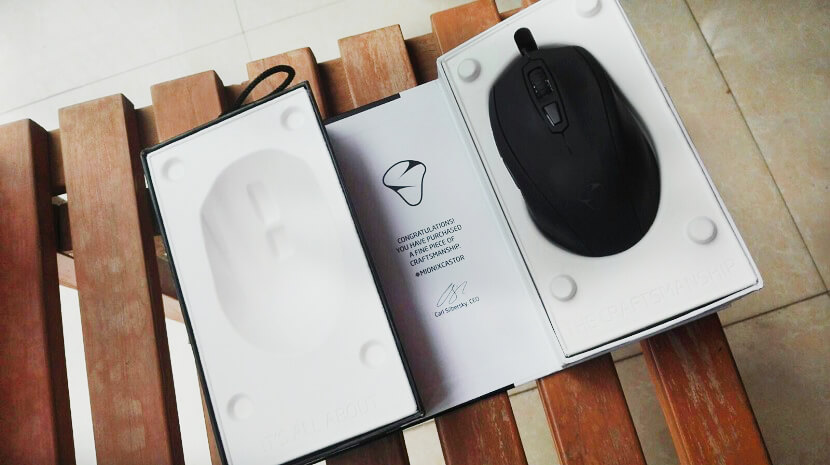 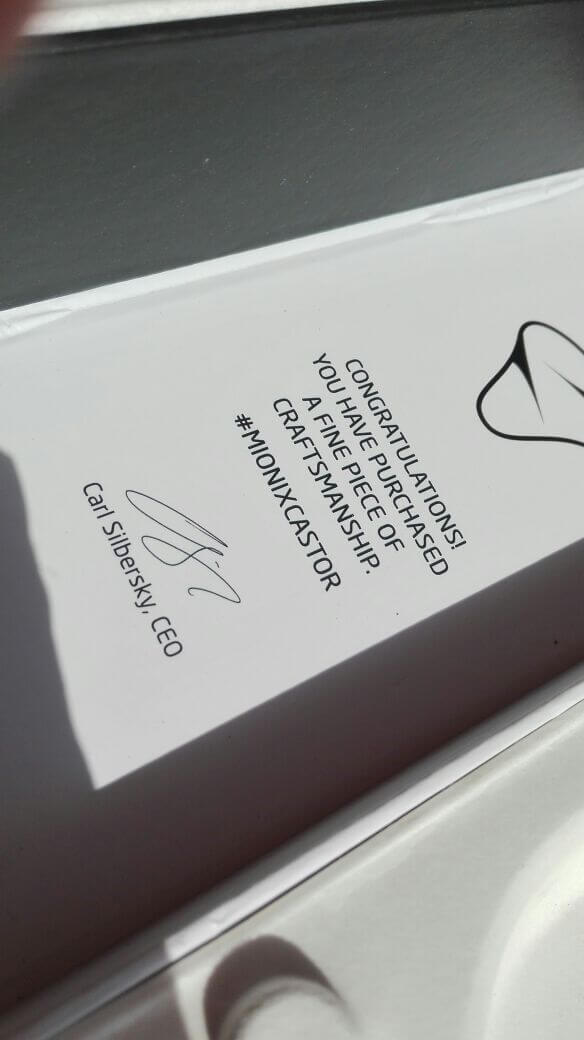 And as I opened the box, I was surprised at the detail of effort they’ve put in packaging the Castor. They’ve made a mold on both side of the box so it’ll fit perfectly in the box. And right in between, we’ve a massage “Congratulation, you’ve purchased a fine piece of craftsmanship” and the hashtag to communicate with fellow Castor owners and the signature from the CEO of Mionix, Carl Silbersky. 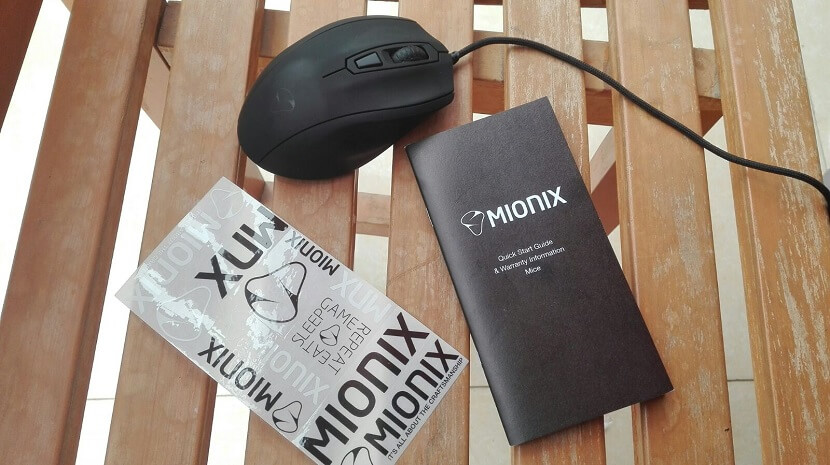 Once you try to remove the mouse from the mold, you’ll notice that the wire is going inside the opening of mold, hinting that the mold is removable. And beneath the half-mold was the Mionix instruction manual and a number of Mionix Stickers. 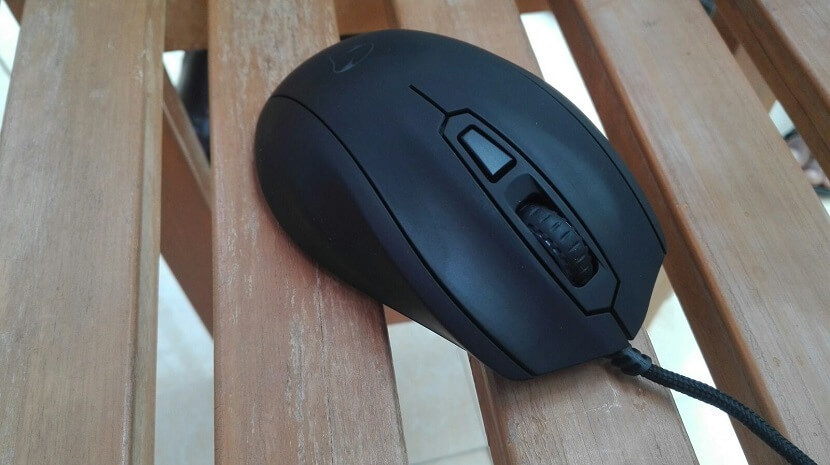 From this view, it’s clearly noticeable that there’s two waves on the right side of the mouse. This design make it perfect for holding the mouse with ring and pinky finger. While not visible in this picture is the inside push on the left side which makes the mouse more easier to hold and altogether it gives you a perfect ergonomic and comfortable design for either palm or claw and somewhere in between grip. Except for the design, the Mionix logo is also visible in the picture which does glow once connected to the PC. 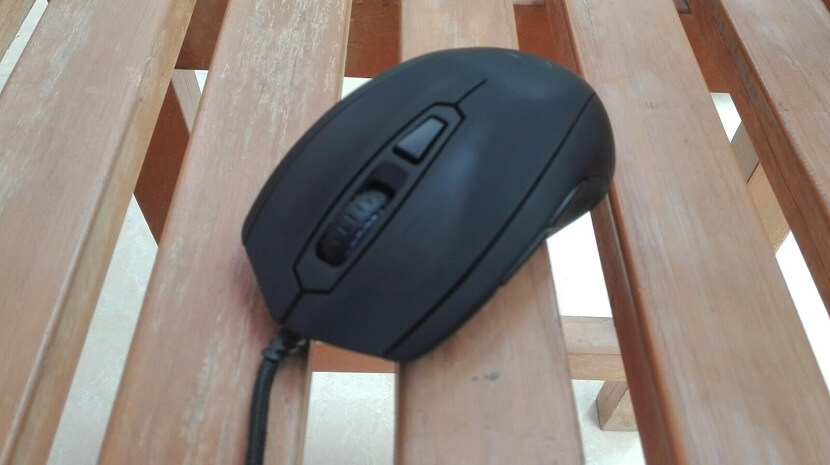 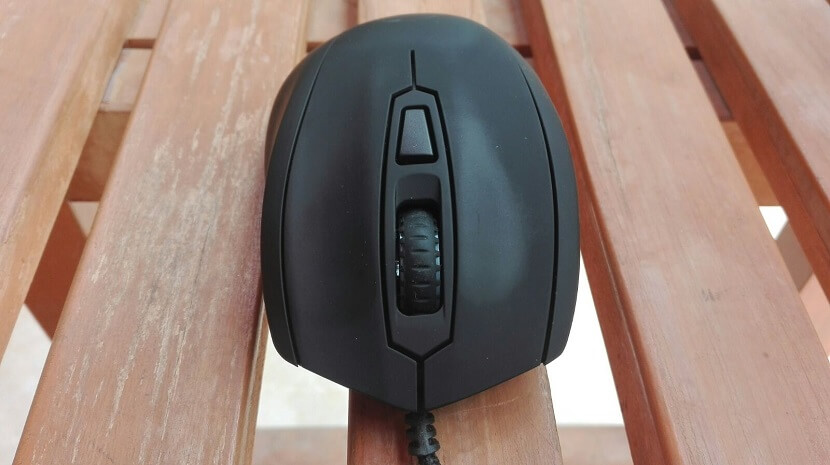 The front of the mouse is not flat but inclined towards the earth for better grip. While just above the scroll is another configurable button. And ohh, the scroll does lights up as well. 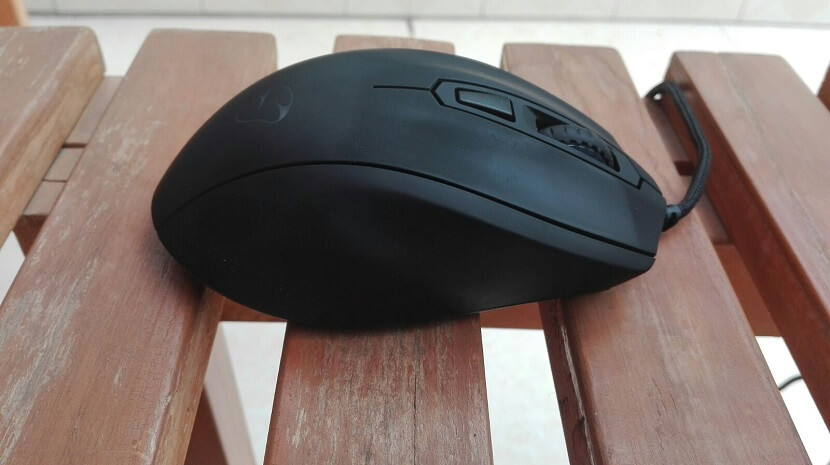 Just a closeup of the right side of the mouse where your ring and pinky finger would go, and the waves on the body makes it easier to hold. 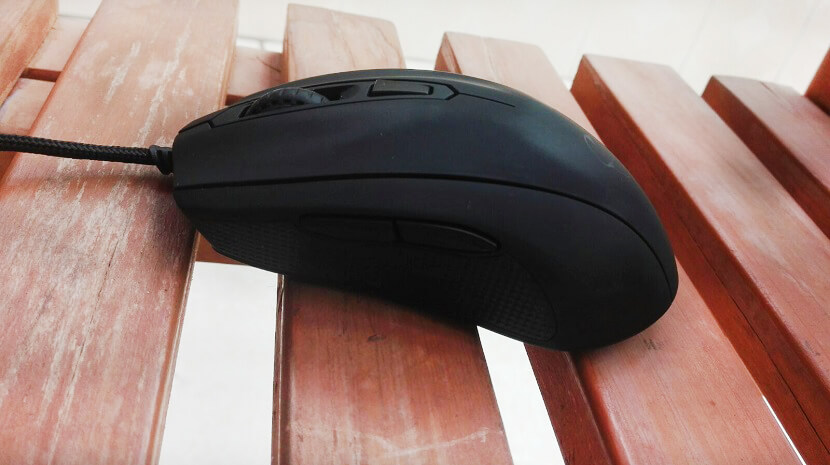 On the right side of the mouse, we have a mesh rubber finish making it even harder for the mouse to slip out of hands. Also, the size of both buttons is visible as well. They are position so well that my thumb lays right above the split in both buttons making it a lot easier to press them while intense gaming without pressing the wrong one.

Putting it simply, Mionix Castor is probably the best mouse my hands have touched so far. The mouse has a light rubberized coating that not only feels sturdy but also prevents the mouse from slipping from the hand. By far, I don’t think I have had the Mionix Castor slip out of my hands even once. And that perfect grip is achieved by the wave design on the right side of the mouse for pinky and ring finger and the textured thumb support on the left side. You don’t have to apply any pressure on the mouse to keep it under your grip, just placing your grip on the mouse even lightly locks the mouse in place perfectly. Putting it even more simply, I’d like to say Mionix have created the perfect mouse for right handed users, yea, the argument of FPS/MOBA and other category still remains there. But as long as FPS games are concerned, I think that Mionix Castor will be taking the place of my previous favorite.

Mionix is using a PMW-3310 gaming grade IR-LED optical sensor which features an extreme 10000 DPI and with the right surface, it proves to be a perfect competition killer. So far I haven’t had any weird movement on my mouse and the movement feels really smooth on the fabric mousepad surface. The adjustable lift off settings really helps in the immediate turns without having a pause in the movement as well and the lift off distance can go as high as placing the USB port underneath the mouse, like about few mm. There’s no +ve or -ve hardware acceleration so the tracking is pretty accurate. So with Mionix Castor, you can’t go wrong with the performance and tracking accuracy of it. 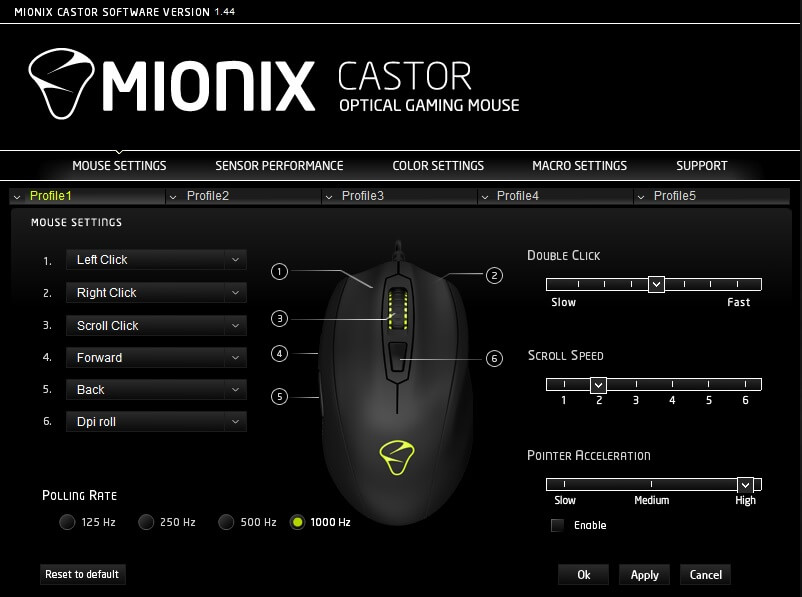 The Mionix Castor software is available as a separate download from their website and the it’s really well optimized and things are put really neatly in the software. On the first tab, you have the button layout and double click speed, scroll speed, pointer acceleration and poling rate options and of course, 5 separate profile to customize. All the six buttons can be re-programmed to perform any other functions, switching profile or macro’s of your desire from here. The scroll speed to begin can be said to somewhat fast if you want to scroll up and down 1 or 2 lines so you might need to bring that down a little. 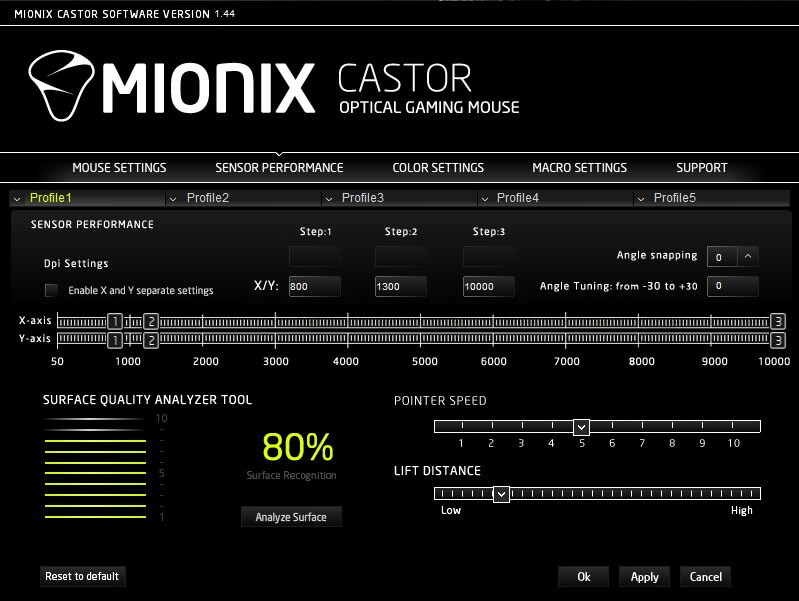 Secondly we have the sensor performance tab from where you control the DPI rate, pointer speed, lift off distance, angle snapping and tuning. You can also check the quality of the surface underneath the mouse with the mouse surface analyzer tool in the software. To appeal any and every kind of user, Mionix has put in pretty much every kind of customization one would like to do, you can even set separate DPIs for X and Y axis.

Above is a example of Angle snapping. What it does is smooth-ens your X and Y axis movement. Though this is not something you wanna mess around with if you’re a FPS or some mouse movement intensive game, at least i wouldn’t want to miss those shots because of too much straighten X and Y axis movement. The mouse starts to straighten up from level 3 of the angle snapping and you can bring it all the way to up level 15 which I don’t think anyone would like to use the mouse on.

And that’s an example of angle tuning. What it does it tunes your mouse to move a little bit diagonal downwards and upwards even if you’re moving your mouse straight to the left or right. This might be a little helpful feature for those with compact mouse movement area or those whose hand moves a little bit upwards or downwards while moving the mouse left/right; helping them in smoothing the left/right movement. The +ve number makes the mouse move diagonally downwards and the -ve number make it goes diagonally upwards and you can move the number all the way up to +-30. 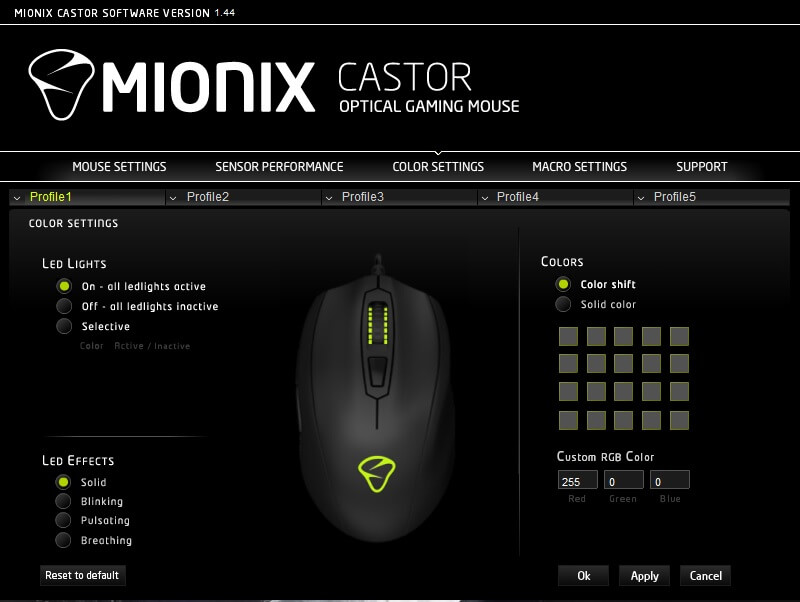 The third tab is where you control LED colors on the mouse. Mionix castor has two LED spots, one at the scroll and one at the logo and you can customize them with up to 16.8 million colors. 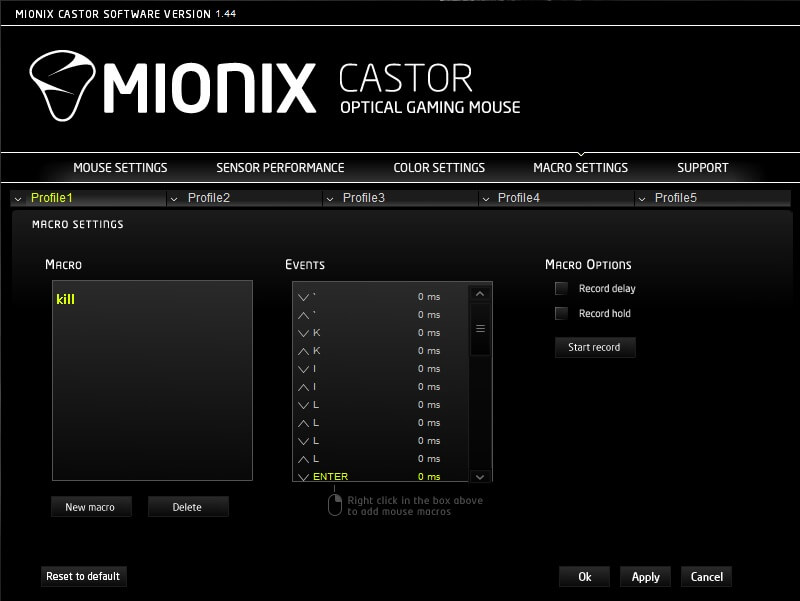 The forth tab is where you record your macros. You can have both keyboard and mouse input as the macros. The the mouse functionally will have to be added manual by right clicking on the events column 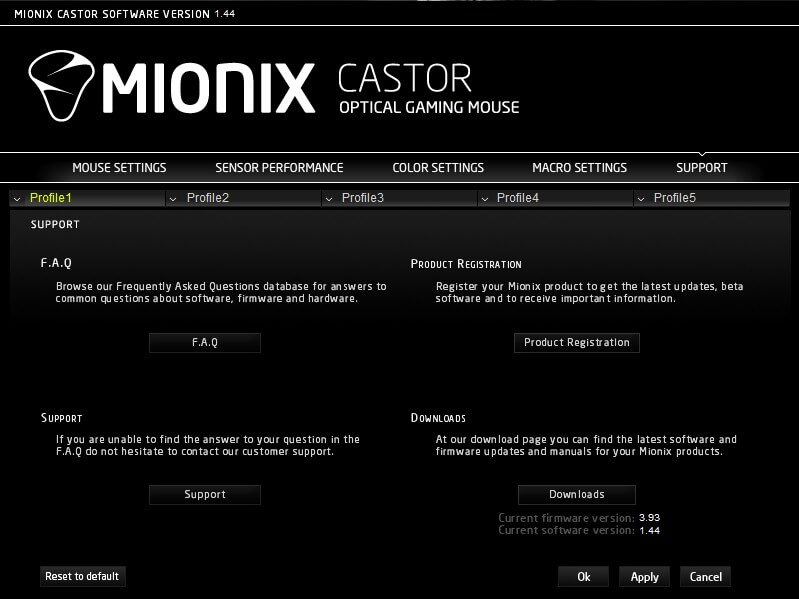 And finally the support tab.

Concluding all that, I couldn’t agree more or less that the Mionix castor is a fine piece of craftsmanship. I’ve liked the build quality and the performance of the mouse soo much that I’ll be making this as my primary mouse until a better competitor arrives under my palm. The grip, the texture, the feel, the weight, all feels perfect when it’s underneath my palm. Well some may say the mouse is very light at only 93.8 gram (w/o cable), and I’d agree with that as this could’ve been solved with weight customization option at the bottom of the mouse. But Mionix probably sacrificed that option for the better grip and design of the mouse and interior hardware position, and if that’s the case i’m willing to give up on that option.

The number of customization you can do with the mouse looks really great for a huge number of audience and that massive of a DPI, even though seems kind of extreme for normal PC user, might be beneficial to some with massive resolutions on desktop. The software for all that customization was also very well organized and seems pretty neat and very easy to use. The mouse does flicker a few short time, for about 1 or 2 seconds once you apply the settings on the mouse in application, and it works perfectly on the settings afterwards thanks to the 32bit ARM processor running at 32MHz. Also thanks to the 128kb built-in memory, you won’t have to worry about switching through your profiles even on other places, all you got to do is set one button to switch profiles. Though there’s one thing that should be added to the software and that is the profile or DPI switching notification that happens on the go. You need to actually feel the change because there’s no notification on the screen that the profile or DPI has been changed.

Finally the price, the Mionix Castor is available for a price of $69.99 which seems to be a little higher than the Corsair Sabre or the Razer Death Adder Chrome which have almost the same offering. So a lower price point might have been a better choice and would’ve appealed the customers. if I were you, I wouldn’t want to miss this mouse on a sale. So putting all the things in the pot, I would like to rate the Mionix castor a 4.5/5 stars and would like to award it with Editor’s Choice and Recommended awards.