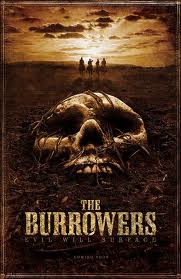 The Burrowers (2008) is a horror-western film, written and directed by JT Petty. The film stars Clancy Brown (Deadwood, Cowboys & Aliens), William Mapother (In The Bedroom, Lost TV series), Sean Patrick Thomas (Lost & Army Wives TV series), Karl Geary (Hamlet, Mimic 3), and Doug Hutchinson (The Green Mile, Lost TV series). The film’s about a rescue party that sets out to locate a family of settlers who mysteriously vanished one night, only to find out that who they are hunting for is more terrifying than anything human.

It would seem that lately there has been an increasing influx of modern western films coming out of Hollywood; the post-Civil War antihero, western Jonah Hex, and the recent Coen Brothers film, True Grit, which was the second adaptation of Charles Portis’ 1968 novel, and of course, soon to be summer blockbuster Cowboys and Aliens. I have been on a recent horror movie craze–and the pressing need to watch something scary that had to involve cowboys—it would seem that it is in fact possible to combine a western into a horror movie. The semi-horror film Tremors, which starred Kevin Bacon—and actually a good movie with many aspects of being like a western, but it has a different tone and appeal than the film discussed in this review. I am talking about something more involved, something that would make you afraid to fall asleep under a blanket on your back porch at night—or sleep out at a campsite where the bears are not the only thing to scare you out of your sleeping bags. Wouldn’t you know it? I found just the film, please give me a moment to tell you all about it.

In the Dakota Territories, in 1879, a woman and her children go missing, and with the father left dead, a search party is assembled to set out and find them. This family is of particular concern for one in the search party, Coffey (Geary), seeing as how he was on his way back to the home to propose marriage to one of the missing women. Since it was in the time of ‘manifest destiny,’ the Indians were instantly assumed responsible for the missing, and since it has been a day or so they been gone, it was also assumed, the Indians had enough time to have their way with them.

Coffey, along with a former slave by the name of “Walnut” Callahan (Thomas) and Parcher (Mapother), head out across the Sioux nation to find the missing family. Tagging along with them a small Calvary of soldiers, set out to terrorize the local native tribes, led by Henry Victor (Hutchinson), who has a serious Napoleon complex, and a total ignorance of the obvious clues that maybe, just maybe, the Indians are not the ones they should be looking for. After torturing a kidnapped Indian, they learn that the ‘Burrowers’ have taken the men that mysteriously vanish overnight. When men moved in and started hunting the buffalo, these nocturnal, dirt dwelling oddities had to start hunting something else—the settlers.

Much of the film focus in the beginning is devoted to finding the missing family members, with moments of terror sequences in-between. The monsters aren’t seen, full-throttle, until the last 10 or 15 minutes of the film. There is no denying the suspense element experienced during the film, and the fantastic camera work, guided by the creative direction of JT Petty (known for writing the Splinter Cell video game series) The ability to capture the men riding on horseback through the tall grass, (which they actually had to grow, by the way), and the rugged mountains of New Mexico are astonishing. The actors performances were brilliant and believable. They even threw in a few comedic elements in the film as well. Overall, what I really enjoyed about watching the film, was that it has this laid-back, dusty Western sort of feel—without having to suffer the smells of the horses and the heat of the desert plains.

Now, this movie is much better than sitting through a movie about teenagers falling all over themselves, in their partially covered, restrictive underwear only to be hacked to pieces immediately, within a few moments into the film—then over and again. There’s no need to sit through some scarred, sweaty hero-type, who goes around blowing up buildings and jumping out of windows and what not, just to prove that they can.

The Burrowers succeeds as a western-horror film. The movie did not appear in theaters and was a straight to DVD release, but with a resounding, big-screen appeal. Yeah, the movie has a slow, but interesting start, but it has a retaining quality of a film you can enjoy watching again, and again.