I own a Nintendo Wii and my son owns a Nintendo DSi, I have every intention of picking up a Playstation 3 at some point in 2011 as well.  There is however not enough room in most household budgets to get one game for each system every month, this would be over a hundred dollars per month spent if  you wanted to purchase a game for all 3 consoles 1x per month.  Most kids and honestly adults can beat an average game in 20-25 hours of play time, for some this could mean 2-3 days, other games can be completed in a good 8-10 hours in one day.  Simply put if you have a family with gamers you can go broke trying to constantly purchase new games to keep everyone engaged.

So about a year ago I signed up for Gamefly because I knew they allowed you to rent games and were like “Netflix” for console games.  The way it works is you login to Gamefly and pick out what games you want to rent.  You build a game queue and depending on what type of plan you have 1, 2 or 3+ games get sent out to your house and you get to keep them and play them as long as you want.  When you finish the game you simply return it in the prepaid envelope and they ship the next game out in your queue. 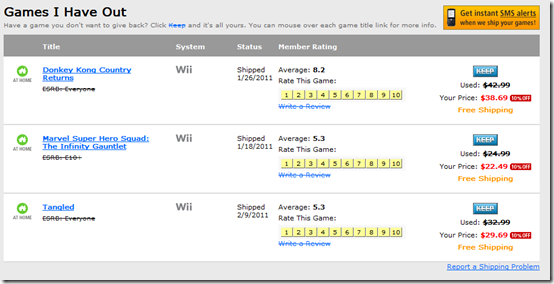 Last week, I upgraded to the 3 at a time plan so I can have both Nintendo Wii and Nintendo DSi games rented out at the same time.  Now I put some DS games in my queue so after I send back the Wii games I have now, my DS games will arrive for my son to play on his new DSi he got for Christmas.

Gamefly allows you to change the order of the games in your queue at any time and sends updates on when new games are available, you can even add games to your queue if they haven’t been released yet so you can be among the first in line to receive the game when it does release.  The fact that I play about 4-6 new Wii games per month with the Gamefly service shows how much I save.  If I bought let’s say 6 games per month, that would be average of $49 per game and total of  $294 per month not including taxes.  With Gamefly I am paying about $30 per month for the 3 at a time plan, but you only pay $15 per month for a 1 at a time plan.

Right now if you sign up for Gamefly you get 1 month free, you pay 1/2 price per month for first two months.  You can also get a free 10 day trial of the 2 at a time plan where you can pick out two games and get them delivered for free, keep them for 10 days and send them back to pay nothing or else let it convert to the 2 at a time plan which comes to just over $20 per month.

There is no doubt that if you are a console gamer and have an Xbox 360, Playstation 3, Nintendo DS, Nintendo Wii this service will allow you to play more games for less money than having to buy them individually.  Gamefly also still rents out games for older consoles like Playstation 2, Gamecube, Xbox and Gameboy Advance.  On top of all that, Gamefly already is supporting Nintendo 3DS games for rent and they will be available starting in March as they release! 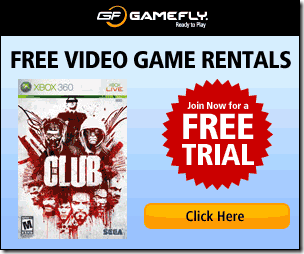 If you own a console, sign up for Gamefly today and get your money’s worth when playing console games.