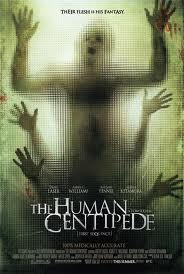 Netflix has some of the most interesting horror movie flicks this go round. One of the more interesting titles I will be reviewing here is a movie aptly titled The Human Centipede. My initial thinking, this would be a cool movie about an alien-human-type creature that will go around and savagely cannibalize a few unfortunates when a hero would arise and put an end to the abomination. I was wrong. Instead, it turned out to be much worse.

The film’s premise follows your basic horror movie set-up: two pretty women get lost on their way to a party. Their car breaks down on a lonely and desolate piece of road. Instead of them trying to fix the flat themselves, they complain and decide to take a walk in the dark woods during a rainstorm with terrible conversational dialogue, and no good common sense. Rather than turning around and waiting it out until morning for help, they venture forth and happen upon a house in the middle of nowhere, occupied by a sick-minded German doctor, whose appearance would have been enough to turn around anyone who has the least bit of good sense.

Dr. Heiter was once a well-respected surgeon famous for disjoining Siamese twins and adults. He is tall, extremely thin, and looks pale and sickly. He invites the girls in and they sit on the sofa while he goes to another room and pretends to call for a tow service. While they wait, he offers Lindsay (Williams) and Jenny (Yennie) a drink of water—unbeknownst to them both, contains a sedative.

When they regain consciousness, they find themselves confined to hospital beds. In the bed next to them is Katsuro (Kitamura). Dr. Heiter, excited that they have regained consciousness, decides to go into detail his plans for them—if any of you reading this have, weak constitutions…stop reading right about….NOW!

Okay, for those of you who are still here pay attention because I will only go over this once. Please observe fig.1 “connected” to the right.

As you can see, Dr. Heiter will surgically join these women, and one more, in a human chain connected via the gastric intestinal system or from mouth to anus. This will allow food to pass through each individual, and come out the person on the end. Now, for the next diagram, fig. 2 here below on the left: 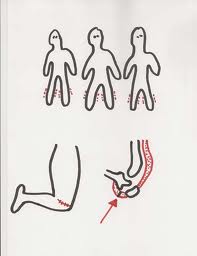 He will surgically fix their knees so that they can crawl on their hands and knees in cadence like an insect.

Of course one of the women make a failed attempt to escape the horrors of Dr. Heiter’s “secret-lab” only be caught again and wind up in the “middle” of all this (hehehe, ahem). After mouth and anus(s)  are sewn together, with Katsuro in the lead, they all attempt to escape once more. After another failed escape and a few beatings, Dr. Heiter feeds his creation and of course, the other ‘attachments’ are fed the digestive remnants via the alimentary canal. It’s okay, feel free to gag.

In the meantime, two cops found the car of the two women on the road and decides to visit the doctor and inquire about them. Now these cops, none the wiser to Dr. Heiter behaving strangely, are invited in and eventually, botch the potential rescue.

Now I will stop here to let the above horrors to sink in. Overall, the entire concept for this film is well—disgusting. Apart from that, there is potential for improvement in places. The cinematography was mediocre, but it did leave you feeling what was happening in the film and helped to make the situations believably creepy, slow, and painful to watch. The acting was, this is putting it simply, hilarious to watch, and left much to be desired despite the circumstances in the film. The Human Centipede is not a terrible movie. If you are able to suppress your gag reflex, feel free to enjoy the film.

Before you decide to go venturing out of your homes for a night on the town, here are a few pointers in case you are invited to a party in a part of town you may be unfamiliar. First, know exactly where you are going to avoid asking for directions from anyone if you happen along a dark road. Two, be sure you know how to change a flat tire yourself and three, never, I mean never drink anything if you did not see the drink being made with your own two eyes.  This is just simple advice–no need to thank me. However, if you should find yourself part of some freak experiment like the one in this film and you’re told that you will become one of the three parts to a human centipede type thing—be nice and pray that you are not the one in the middle, or at the end.