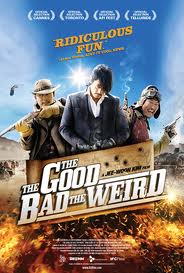 The Good, the Bad, the Weird (2010) is a Western, Korean film, directed by Jee-woon Kim, and stars Kang-ho Song (The Host, Sympathy for Mr. Vengeance, Thirst), Byung-hun Lee (Hero, I Saw the Devil, G.I. Joe: Rise of Cobra), and Woo-sung Jung (The Warrior, A Moment to Remember), in a gusku-western film about three Korean gunslingers who’s paths cross un-expectantly during a train robbery.

Guksu Western or “noodle” western in Korean, is the term used to describe this film—just as “spaghetti” was used to describe the Clint Eastwood westerns of the 1960’s, which is this film’s obvious influence—kind of mixes The Good, the Bad, and the Ugly and the trilogy of Eastwood’s Fist Full of Dollars, For a few Dollars More, series in a modern day, fast paced, and action packed Korean film. The film is set in 1930’s Manchuria. Occupying Japanese and Manchurian forces are after a map, which details the location of an unknown treasure.

In almost every truly good film, there has to be a bad person, a heroic good person, and a person who acts as the comic relief for the rest of the bunch. In this film, three Korean men paths crossed while, each with a different purpose, the Bad, Chang-yi (Byung-hun Lee), was hired to steal a map from a banker. Aboard the same train, Tae-goo (Kang-ho Song) was unwittingly trying to rob—all the while, a bounty hunter, Do-wan (Woo-sung Jung), the Good, hired by the Japanese army is hot in pursuit to apprehend Chang-yi. 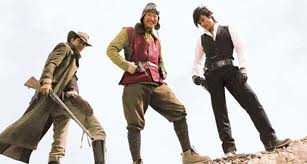 to open a suitcase he believes contained more money, whereas a gun and a map reside instead. At the same time, Chang-yi caused the train to come to a halt while he and his gang of robbers board the train to try to find the car the map is stored. During all this, bullets are flying, women and children are screaming—and the Good, Do-wan, a ride up on horseback next to the train, and a battle between Chang-yi’s gang ensues.

Now, after Tae-goo accidentally “acquires” the map he thinks will make him a fortune, escapes, and is now being pursued by Chang-yi, who is known for his brutal ways for apprehension. To add, a group of Asian outlaws known as the Ghost Market gang, Japanese, and Chinese bandits get word of this “potential prize” and reward will do anything to get their hands on it. Bodies quickly begin to pile up and although it is clearly not understood what information the map contains or truly depicts who, in the end, winds up with the map, however, the film definitely keeps you entertained as to how they get there.

The film depicts brilliant choreography and stunts—the shootouts the actors finds themselves in  just absorbs your attention, and you could easily find yourself bracing while the actors jump from roof-tops, and maybe even flinch a time or two from the gun battles and fancied knife work by Chang-yi. The film is intense and with a touch here and there with some hilarity fantastically woven in.

Now, I do not know if you are familiar with another foreign Western film, “Sukiyaki Western Django” directed by Takashi Miike, which Quentin Tarantino had a brief role in, briefly comes close in comparison, however, “The Good, the Bad, the Weird” is in a class all its own.

I absolutely love foreign films, and the Asian genres of films are my most favorite of all. Nevertheless, to include mine and Hollywood’s newest fascination in Western films, I can clearly state, “The Good, the Bad, the Weird” is one film you would not want to miss!