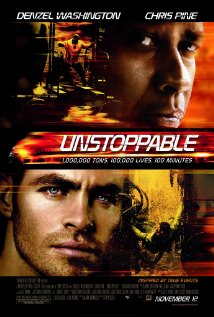 Unstoppable (2010) is an action-thriller directed by Tony Scott and stars Denzel Washington (Training Day, The Book of Eli), Chris Pine (Star Trek 2009), and Rosario Dawson (Sin City, Rent). The film, based on a true story, is about a runaway freight train transporting toxic chemicals, and two men who try to stop it.c

In May 2001, a freight train with two of its cars filled with hazardous materials–barreled through approximately 66 miles of railway in Northwestern Ohio, with no one conducting the train. Another slowed down the train and a railroad worker jumped onto the moving train pulled the break, and eventually stopping the 47- car CSX train. The true details sound enough like a Hollywood runaway train tale of its own—but it was an event that inspired the movie of this latest review, Unstoppable (2010).

The film begins in a train rail yard, when one of the rail workers gets an order to move one of the engines off a rail line intended for a train filled with school kids. The scenes take you back and forth between the train yard and a teacher educating her class the dos and don’ts of train safety. Dewey (Ethan Sulpee), is at the helm of a train, decided that it would take extra time to engage properly the air brakes, and decides to cut corners, and wait until the engine reaches the determined stop, he would then adjust the brakes.

All the while, the other coworker is screaming to Dewy to do otherwise over the CB radio. Looking ahead on the tracks, Dewey notices that the switch is not set for the right tracks, decides to jump off the slowly moving train, to switch it. Of course, the breaks throttle eases into the off position and then picks up speed. Realizing what is happening, Dewey fails to re-board the faster moving engine, headed onto the main traffic line. Due to Dewey’s incompetence—and no longer functioning air brakes, you know that this will be the runaway engine that is the setting of a potentially dangerous encounter, where lives are at risk.

In the meantime, Will Colsen (Chris Pine), is driving to his first day on the job as a conductor. He’s trained by 28-year veteran engineer, Frank Barnes (Denzel Washington), a no nonsense and by-the-book mentor, who does not take Colsen’s nonchalant attitude lightly. There is fantastic on-screen chemistry between these two actors, and when they are both dragged into this potentially disastrous situation that starts to get out of hand—their performances shine. As this train, spirals out of control and its hazardous contents are headed straight towards a town of Pennsylvanians—the shit they are in gets thick. 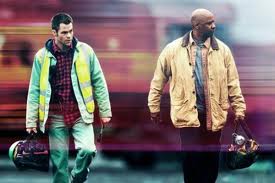 Connie (Rosario Dawson), the train-yard manager helps Colsen and Barnes with navigating the escaped locomotive and is forced to do what the corporate office wants, in an effort to save the company millions of dollars. As always, when corporations become involved in a rescue mission the potential for failure is nearly 100%. She then decides that the best thing to do is go with what Colsen and Barnes’s method to stop the train–while in their own, try to catch up to the runaway engine, the opportunity comes in to learn a bit more about their personal lives and the two eventually bond. Their dialogue gives just enough information into their own personal situations, so what you see on screen appears to be a natural understanding of the intense situations behind each character and draws you in deeper to be concerned about their safety when the more riskier scenes in the film occurs.

If you are into action films, then Unstoppable (2010) is the perfect movie to watch. It definitely has the keep you on the edge-of-your-seat nonstop action. Director Tony Scott, who also directed the film ‘Man on Fire,’ most certainly delivers. The cinematography’s look and feel of the film is like a classic Die Hard; gritty, hot, and realistic to watch—even as these monstrous locomotives of unyielding power jar and speed—the situations in the film are believable. The camera proves just how dangerous and powerful these marvels of engineering, these trains, truly are.

Depending on the type of media purchased, Blue-ray and DVD has a host of features listed below. The DVD commentary by director Tony Scott is really cool and interesting to watch, as you will learn some very interesting tidbits about the film production. There is footage of how many of the most stressful and difficult scenes in the film were shot and the amazing talents of the stunt personnel, even some of the stunts performed by the actors themselves are really interesting to see. Also, screen-writer Mark Bomback discusses his inspiration for writing the script for the movie. The Blue-ray 2-disc pack filled with scene and movie extras–including a digital copy of the film.

Action-adventure films are not my most favoritest film genre :(, but it is always good to break away on occasion and find a gem of a film. However predictable Unstoppable (2010) may be, the film connects with those personal levels of adrenaline and suspense. Would it be fair to tell you about every detail of this film? No, it would not be. How else would you appreciate the sheer velocity of every occurring moment in this film?

The events of this movie are best left to be experienced on your own.

This film is rated PG – 13 for sequences of action and peril and some language.