Okay, I am a little late to the draw here regarding testing Dropbox and using it.  I admit that someone as into software and technology as I am, I should have been using and talking about Dropbox at least a year ago if not longer.  The fact that Dropbox gives you 2GB of Free Online storage and has such a simple client installation that basically creates a special folder on your computer that is a direct connection to your online storage space is brilliant.  I am serious, just sign up and download the Dropbox application and you get the free 2GB of online storage, heck they give you 50GB for only $9.99 per month.

Once you install the application and set which folder you will dedicate as your “Dropbox” you can simply start copying files over and they will be stored in the cloud.

Note, with Dropbox you also get a free “public” folder and this public folder allows you to access files by direct URI.  An example would be a public image I have which you can directly access here:

You notice the /21335550/ that is my Dropbox #, and if you know someones dropbox #, you can basically find and access any public image.   So when I read in The March 2011 Maximum PC Magazine issue that Dropbox can potentially be used as a CDN or Content Delivery Network, I have to admit that I was intrigued.  A CDN is basically an online cloud that servers up your sites static content like images, media, css, js files…etc.  By serving up content from a cloud CDN you are reducing the amount of GET requests to your own web site and thereby potentially improving pageload times as well as improving reliability and throughput since less actual traffic is being requested directly from your sites.  In fact, most high end websites including blogs will use a CDN service and most use Amazon S3 or MaxCDN, big time companies may use a corporation like Akamai as their CDN for static content.

You can manually upload images to your Dropbox and then insert them into blog posts from your Dropbox URI, this would be a manual way of leveraging Dropbox as a CDN and is how Maximum PC recommended doing it, but I wanted to see if there was an easier way.

I looked in the WordPress Extend archives and found 3 plugins that claim to integrate WordPress with DropBox and only found 3 WordPress plugins of note to talk about.  I tried all 3 including DropBox Sync, The DropBox Plugin and DropBox CDN but DropBox Sync was the only one that automatically uploads images/media to Dropbox from inside the post editor automatically.  Dropbox CDN will only host your WordPress blogs theme files and only works if your theme uses relative references and template tags for all its files, if any files are hardcoded in the include statements then it won’t work.

Out of all the plugins I have tried, this one had the most potential.  This plugin is so simple to setup and configure, you simply install it and then provide it with your Dropbox Email, Password and Dropbox # (which you get from the URL of a public file). 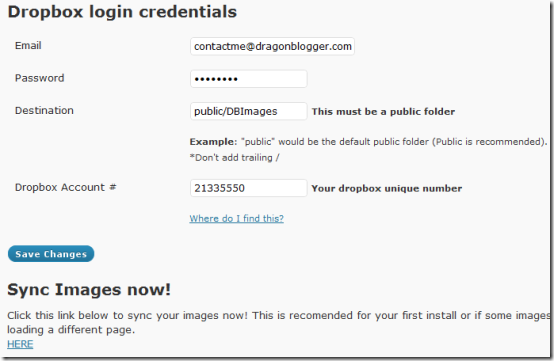 All you need to do is then specify where you want the destination folder to be to house your Blog Images, I would create a subfolder under /public like I did.  You can “Sync Images Now” but I don’t recommend this as I had over 2GB worth of content in my wp-content/uploads folder, unless you have much less content or you are paying for the 50GB plan I wouldn’t sync your older files.  But even if you don’t sync your older files, with the Dropbox Sync plugin installed, whenever I uploaded a file into WordPress and inserted it into my post, it would automatically sync the file with Dropbox and load the image in my post from Dropbox.  My tests confirmed that the image loaded faster on my site than when I hosted the image from my own hosting provider.

Before you get all excited now I was stopped in my tracks by the following information:

Dropbox Sync is no longer supported by the author, it is an orphaned plugin.  If you read the author’s website here –> http://adrianstech.com/2009/09/dropbox-sync-wordpress-plugin/ he mentions that there is no support and he is trying to get the plugin removed from the WordPress archives.  This is a shame since the plugin works so well and with minor updates it probably could become incredible.  At 216 lines of code it isn’t weighty and I think this is something that should be picked up by someone.

Should You Use DropBox as a CDN?

I have read on some sites including the Labnol article –> http://adrianstech.com/2009/09/dropbox-sync-wordpress-plugin/ which talks about the benefits of Dropbox CDN but if you read the comments you will find that some companies/corporations block Dropbox.  This means that any websites visited wouldn’t be able to display any content or media hosted from Dropbox.  This is a security concern and a valid one, companies don’t want users to be able to upload data from corporate computers to a cloud backup service, potentially sensitive data can be backed up.  What this means that unless a plugin is used to “cloak” the dropbox URL somehow, using Dropbox as a CDN may cause your images or media to not display for someone visiting your site from a corporate computer.  This may not be a critical issue if you are only using Dropbox to host images, but would potentially screw up your blog if you are hosting your entire blog theme files from Dropbox with the Dropbox CDN plugin.

Also, I can’t find anywhere what Dropbox Terms of Service are involving the # of GET requests or bandwidth usage, I mean I can’t believe Maximum PC and Labnol both promoted using Dropbox as a CDN, yet Dropbox doesn’t give any details that I could find on whether or not this is a valid usage of their service.  Think about it, MaxCDN charges around $50 per month for using their plan:

Amazon S3 has its own pricing plan based on bandwith usage, # of GET requests and file storage

Yet DropBox has no listed price, doesn’t seem to charge for bandwith or # of requests, only lists 2GB Free and $9.99 per month for 50GB of online storage.  Based on this information I wouldn’t think that Dropbox would allow itself to be served as a CDN, I imagine if too many people were starting to do this it would hinder their environment and they would have to charge for # of requests.  However, that being said I looked at the wiki.dropbox.com and they promote all kinds of plugins and modules that allow you to host photo galleries and other content from your Dropbox account, so they seem to promote using their public files as ways to host images on your sites.  In fact, I scanned the entire Dropbox Terms of Service and found nothing that stated you couldn’t use it as a CDN or that there were a limited amount of GET requests.

I contacted Dropbox support and the offered the following information regarding people who were thinking about using Dropbox as a CDN.

Dropbox is not a CDN nor do we offer equivalent services that most CDN’s offer such as download statistics, password, etc. Also, we do have bandwidth limits for Public links set to the figures below:

So in review fellow bloggers, I think Dropbox is not likely a good choice as a CDN for your WordPress blog.  The reasons are due to lack of plugin support, Dropbox being blocked by corporate firewalls and no valid terms of service are listed to even know if this is acceptable use of Dropbox even though it is being promoted by tech magazines and popular sites.  I loved the idea of using Dropbox as a potential CDN, and I confirmed that my files loaded so much faster from Dropbox than from my own hosting provider, but the fact is it is not a reliable CDN and reliability is important when running a website or blog.

DropBox however is a great deal for some free online backup and even for hosting files/folders you want to share with friends.  You want to share some family photos, or something you created?  You can simply upload it to Dropbox and set it up so only that person’s email can receive the file.  I think Dropbox is a fantastic service and highly recommend it as a way to store or share content online with others.  I don’t however think it makes a valid choice as a cheap or free CDN for WordPress bloggers.

Just to let you know, Dropbox will increase your 2GB of storage by 250MB for each person that signs up under your referral link.  They will actually increase you up to 8GB total permanently for free, so if you are interested in Dropbox why don’t you sign up for Dropbox with my affiliate link and help me get some free extra storage.

On another note, if you are just looking for some free online storage, Windows Live SkyDrive gives you 25GB of free online storage but has no desktop client and is not nearly as efficient at letting you add and upload files to your online storage as DropBox, still at 25GB if you don’t mind dragging and dropping files in the browser or selecting them via upload, this is a huge amount of storage for free.  SkyDrive however does not give you a public URI/URL for your uploaded files and only lets you embed or share them, SkyDrive is not a candidate for use as a CDN in any way.