Natural Selection 2 hit the steam store yesterday and it overall looks like a very solid game. Based from its 2002 predecessor it looks to improve on every aspect, with a huge upgrade in its graphics.

What is Natural Selection 2? 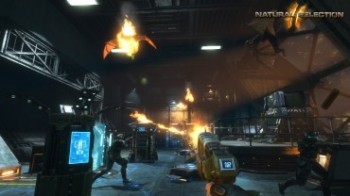 NS2 (Natural Selection 2) is a multiplayer first person strategy/shooter game. It pits two sides against each other, Aliens vs. Marines. Players can choose to be on either side and can pick from certain classes on the alien team like a flying lurk. Both teams have different play styles to defeat the enemy, for instance aliens can build upgrade chambers, evolve abilities and build plant traps. For marines they can buy weapons from armouries and build sentry’s/siege cannons to assault the opposing team.

Also Real-time Strategy:
Commanders can play from overhead to lead their team to victory. They can build structures anywhere, collect resources and research upgrades.

What have they used to make it look great?

Dynamic Enviroments. This is what makes the game so interactive players can blast a flamethrower to stop the infestation.  Also aliens can knock out power nodes to down marine infrastructure.

In NS2 they have created WYSIWYG graphical tools and have used powerful scripting to allow you to create your own weapons, scenarios and games. Also there is fresh content every month which will add weapons and maps to make sure players won’t get bored.

What specs do I need?
Minimum:

Are there any other versions I can purchase?

There are two versions that are currently available for purchase:

The Original which just comes with the game and also the Deluxe which includes:

Almost 1 hour of tribal, industrial music composed by David John and Simon Chylinski. This includes all the music from our trailers and videos.

40+ pages of concept art by Cory Strader, including environments, creatures, weapons and more. Cory discusses the process behind designing the unique technological/animal look in the game.

Community artist Rantology created some of the best and most unique views of creatures in the NS universe. Custom Steam avatars complete the package.

A new marine model with custom visor and equipment makes you look distinctive in-game. Existing owners of the original “Black Armor” marine will be able to choose between any models they own.

This game looks like it could really impact the future of RTS games and will be providing lots of fun for RTS fans for a long time.