I just tried an app that I must rave about. Before I do however, I need to tell you why I had to hunt this app down, and then, what it did for me.

I have had my tablet for A little over a month now. I have installed and removed dozens of apps, and well, things began to slow down. They got very slow in fact and I started getting errors whenever I opened anything. It would take several minutes just to open a web page, and my favorite apps would stop responding or just close down on their own. I was not happy.

So, I did what many of us do, I panicked, no, I looked for solutions. I installed a number of cleaning apps. They all did the same thing, they cleaned the cache files but, no speed increase. So I would uninstall it, and try another and another, and you guessed it, another. None of them helped at all.

I even started manually clearing out my cache files and still no speed increase, and still tons of errors. I went so far as to contact the manufacturer and they had no real understanding of the issue so, I hit Google and began a search. Out of 10-12 web sites, nearly all of them said there wasn’t anything that could clean up an android device other than going file by file through all the folders and manually deleting unused or unwanted files and folder. What a pain. 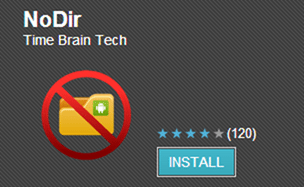 One site, one app, one little program changed everything, and it is FREE. NoDir is that app. It is simple, and easy to use. I started with Dir-leter, and had to do a little set up and it cleared out over 2000 unused and unneeded entries. It uses the androids own log files to determine what had been uninstalled, and then takes care of cleaning things out. Just set mode to recursive, and logging to on. 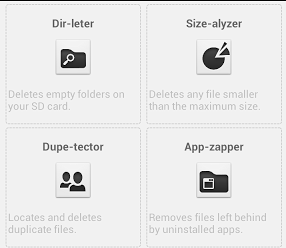 Then, once you have done the above, run Dupe-tector. I left the options as they were, and ran it as well. It cleaned up a bunch of duplicate entries, and was done.

Over all, I cleared up about 100-200 Megs of storage space, and it was a big help. I highly recommend this app, for its ease of use and how fast it runs. My tablet is now back running like it did when I first got it. My web pages open fast, and my apps no longer crash.