Today for review we have another sample from Nusound. In the previous review on Nusound Cube NU-016, I mentioned that I have a second favorite BT speaker from the same company, it’s the Nusound Wave Rider NU-024 which is a round shaped portable BT speaker and that is what we have at the review table today.

The Nusound Wave Rider NU-024 uses a single 4 ohm 5w drive which has a SNR value of 80+-3db. The speaker is 45mm in dimension while the unit size is 93x93x42mm. For connectivity purpose, we only have the Bluetooth as an option with transmission range of up to 10 meter. And to accompany you with music and stuff through your camping or driving, it’s equipped with a 600mAh Li-ion chargeable battery. Ohh and it is labelled as IPX7 waterproof as well. 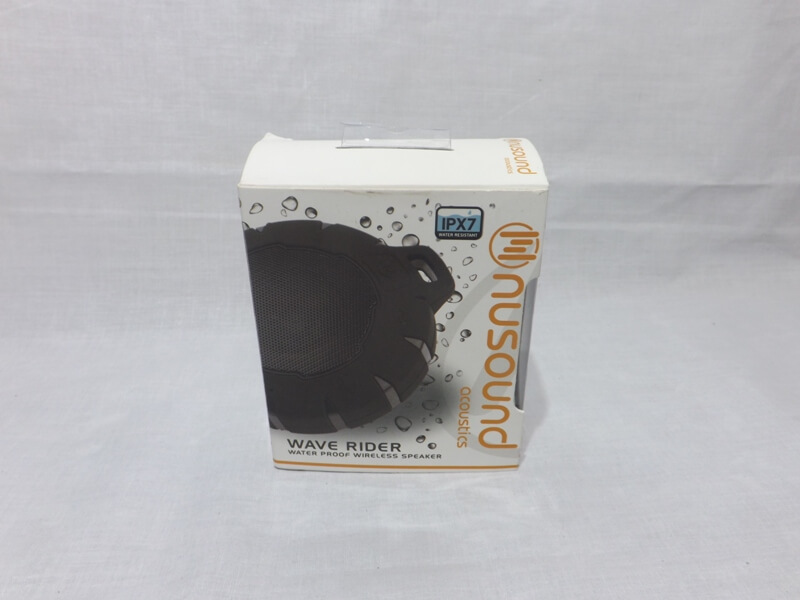 We get the speaker in a white cardboard box with the speaker picture on front along with the model name and company’s logo. 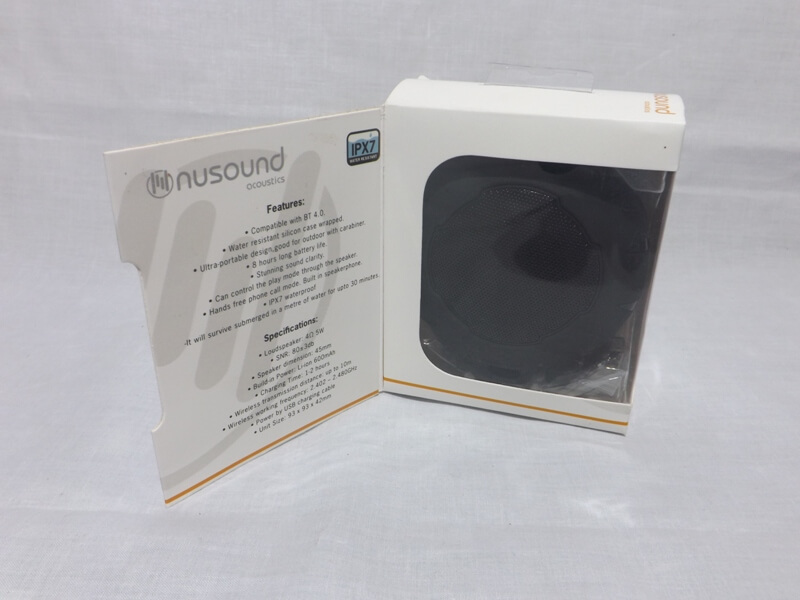 The box has a flip design which unveils the specifications and features of the speaker on side while the speaker itself on the other side. 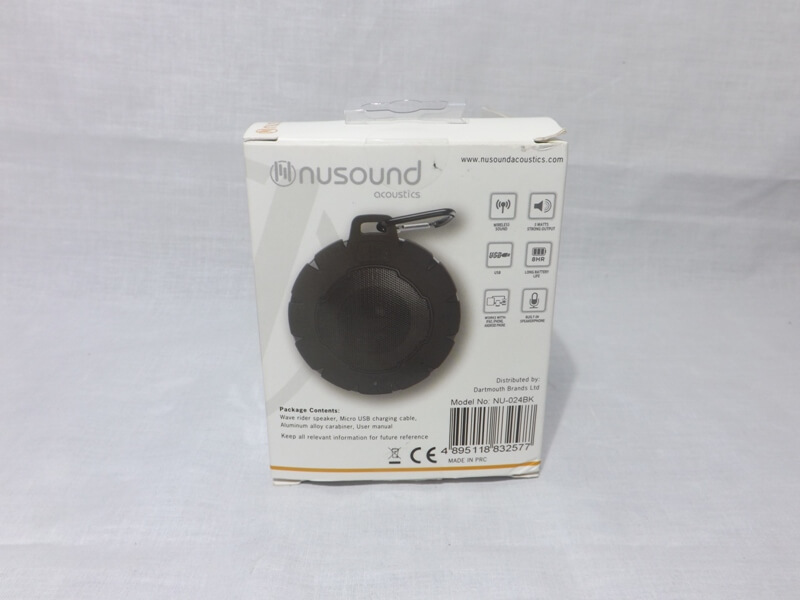 On the back we have the picture of the speaker once again and mention of the package contents so you can tell if anything is missing. Also we have some features listed on the right side of the box. 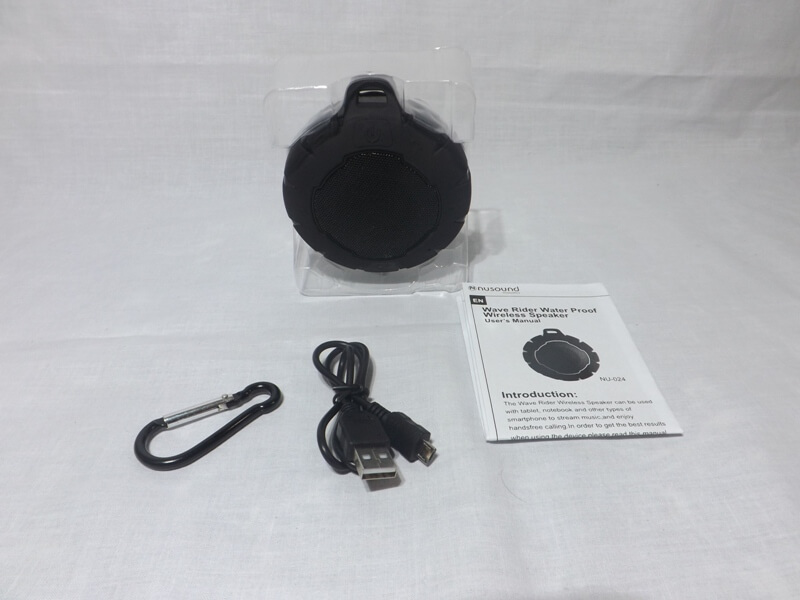 Since the speaker is round shaped, to prevent it from moving inside the box, we have a plastic container holding it in place inside the box. Also we get a Aluminum alloy carabiner, Micro USB charging cable and a user manual along with it which was mentioned at the back of the box. 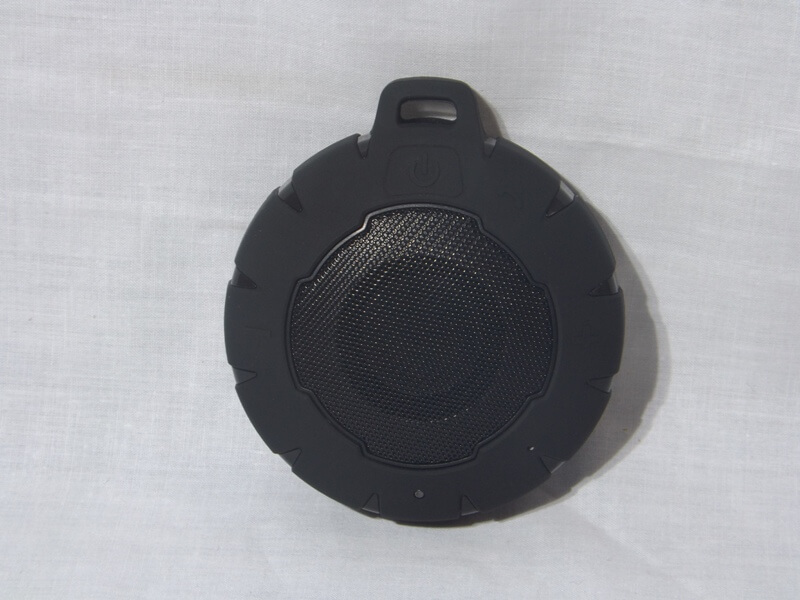 This is how the the Nusound Wave Rider NU-024 actually looks like out of the box. The body has a rubber finish over it that makes it less slippery and also add a little more water proofing to the body. The drive unit is visible through the transparent ceiling on the front. If you look closely, there are some buttons, mic hole and a LED indicator on the front of the speaker as well. And lastly there’s the hook at the top of the speaker where you can attach your carabiner. 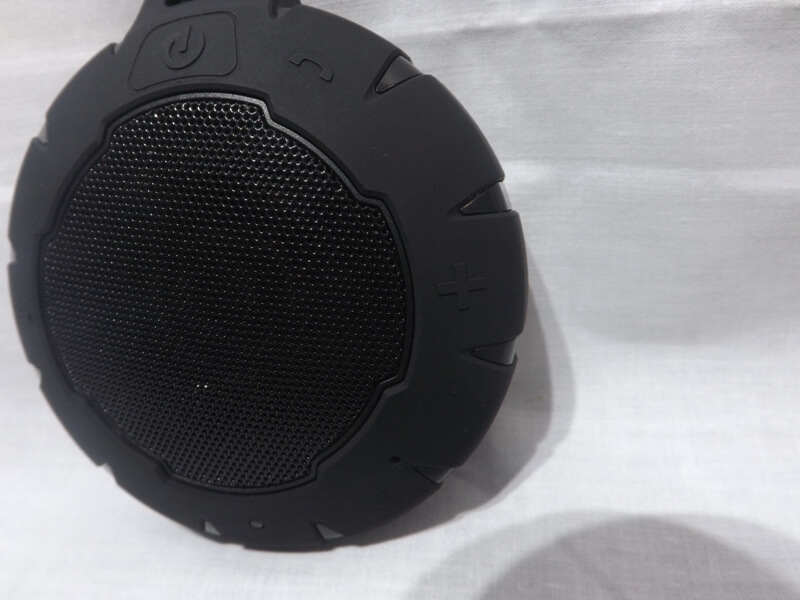 Clearly visible in this picture, we have the volume increase button in the middle and right below it is the microphone hole and beneath that is the LED status indicator. Coming to the top, in center we have the power button used for of course powering it up and just beside that is the button used for hands free functions. More on that later. 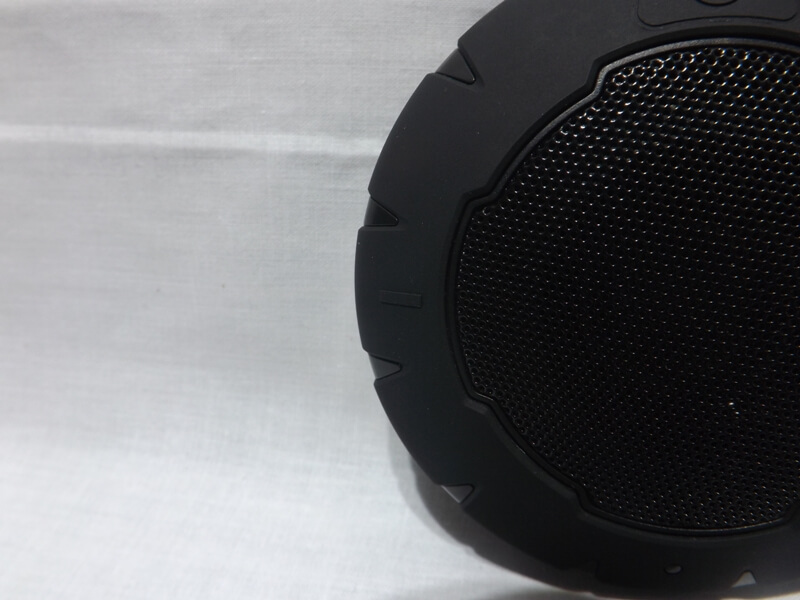 There’s not much to talk about the left side of the speaker as it only have the volume decrease button there. 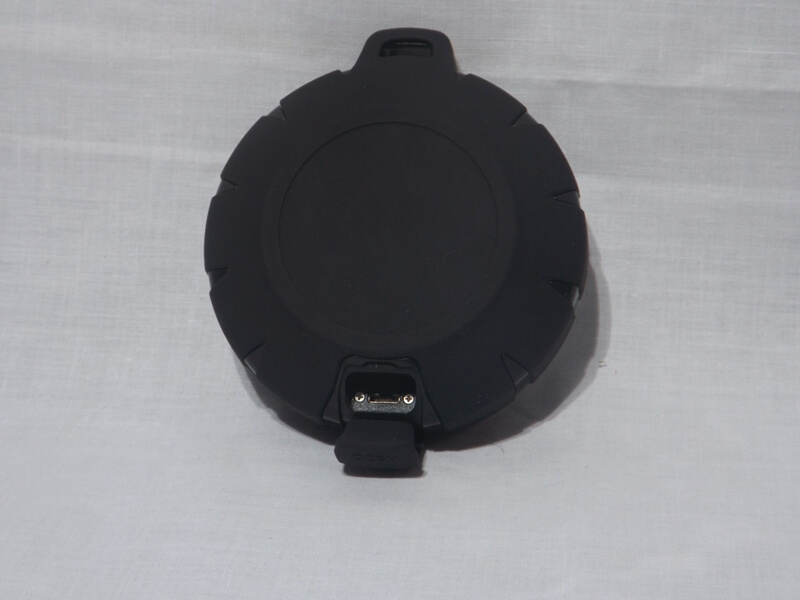 The whole back of the speaker is covered with rubber and that’s where we have the micro USB port for charging. Unfortunately we don’t have any 3.5mm audio port on this speaker that could be connected to devices other than those which do not have Bluetooth.

As mentioned in the specification section, we only have Bluetooth as the connectivity option. There isn’t any 3.5mm audio port on the speaker for connectivity via cable and neither does it have support for NFC. So in short, you’re stuck only with Bluetooth as an option. If you want to use this speaker with your PC then you might want to buy yourself a BT dongle, otherwise you should be fine with the Bluetooth for smartphone and laptop connectivity.

To connect the Wave Rider NU-024, just press and hold the power button for 2 seconds and you’ll see the LED indicator at bottom will start blinking in blue color. Now go to your smartphone or laptop and search for devices, you’ll find the Wave Rider as NUSOUND(NU-024) there, just tap on it and you’re connected to the speaker. The LED indicator will become still on the blue color.

The speaker does play a sound of “Power On” when you power it one and “Connected” when it’s connected with a device. Same is the case when you disconnect the speaker, it plays a “Disconnected” sound. There’s no sound for powering it off though.

So I’ve been using the Nusound Cube NU-016 and Wave Rider NU024 on and off as the battery of either one dies and I’ve come to realize that the volume of Wave Rider is louder than Cube which uses 2x small drives instead of 1x bigger one. That, but the quality of sound on both the speakers are identical, I haven’t seen any type of distortion from either of the speakers yet. Also there’s no noticeable flatness in the sound.

Though the bass on a comparison level with the Cube is somewhat lacking in performance. I’ve used both speakers on and off for a long time and I can feel the bass feeling is lacking on the Wave Rider when I’m listening to the same song I did on the Cube. It’s not like the bass quality is bad at all, the bass quality is great, you can feel it on the same surface, but it’s just not as good as Cube.

The microphone seems not much different than the one in the Cube NU-016. We have somewhat same result in both the speakers from Nusound with some environmental noises passing through the mic that can be heard on the other side. But still the the sound is clear enough to be understood easily on the other side of the call. 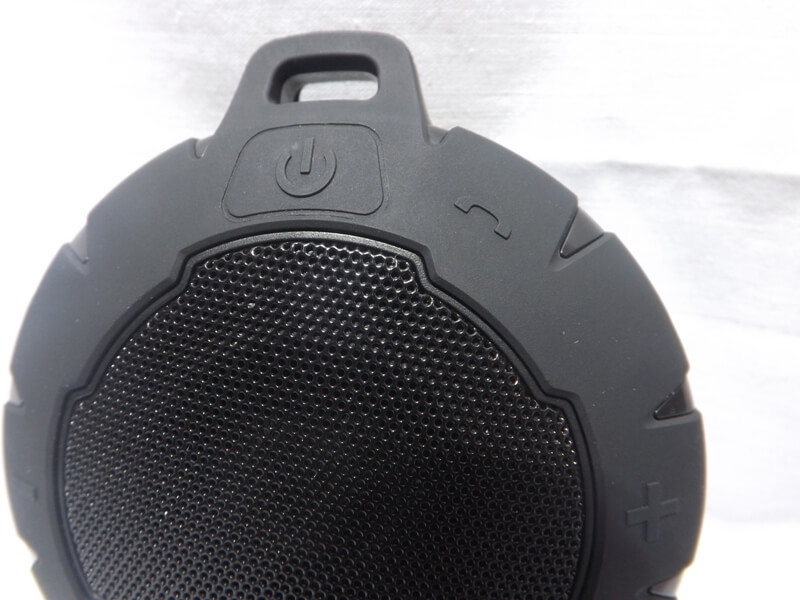 To use the the Hand free option, when connected to the smartphone, just press the button with telephone logo on it once to receive a call or hold that button for 2 seconds to reject the call. Once you’re in a conversation, press the same button again to hang up.

The Wave Rider NU-024 has a 600mAh Li-ion battery which takes up to 1:30 hours to charge from 0%-100% and gives off about 8-8:30 hours of playback time depending on your usage. I’ve used the speaker on and off and every time I came to around 8-8:30 hours of playback before recharge was needed. So in short, you’re getting great battery timing from the Wave Rider that takes up only 1:30 hours to charge completely. 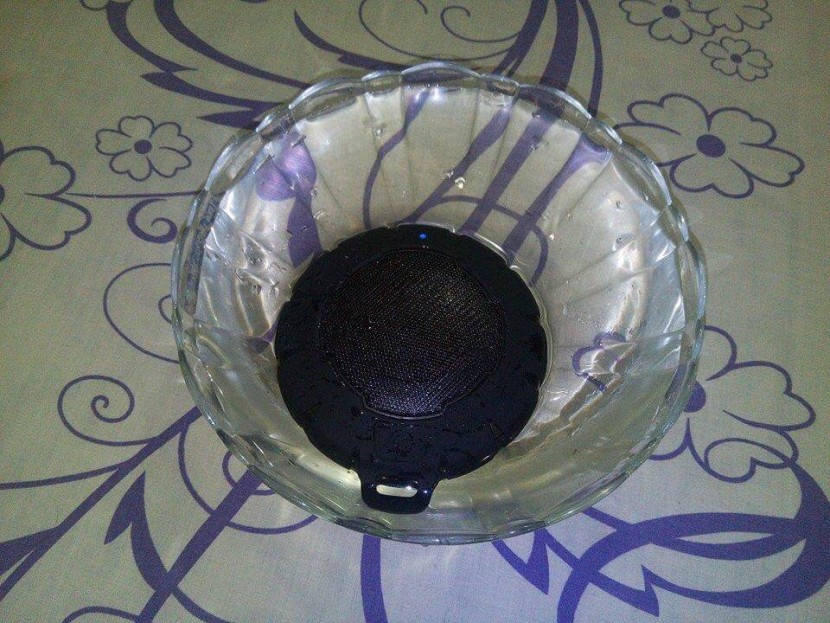 The Wave Rider NU-024 is indeed a water proof speaker. Water proof as in it floats on the water due to the rubber surface of it, no it won’t be drowning in water. But if you end up pouring water right on top of it, you might need to shake the speaker upside down as the grills on top isn’t impenetrable. The water will go through the holes in the grilled wall and block the sound coming from speaker. Once you’ve cleared the water from inside, the sound will be back to as it should be.

As mentioned before, I’ve been using this speaker for about a month along with the Cube NU-016 on and off and I’ll place this one just a slight bit lower in terms of bass performance compared to the Nu-016. But in terms of loudness, the Wave Rider is better than the Cube NU-016 as it uses a bigger drive than Cube NU-016. 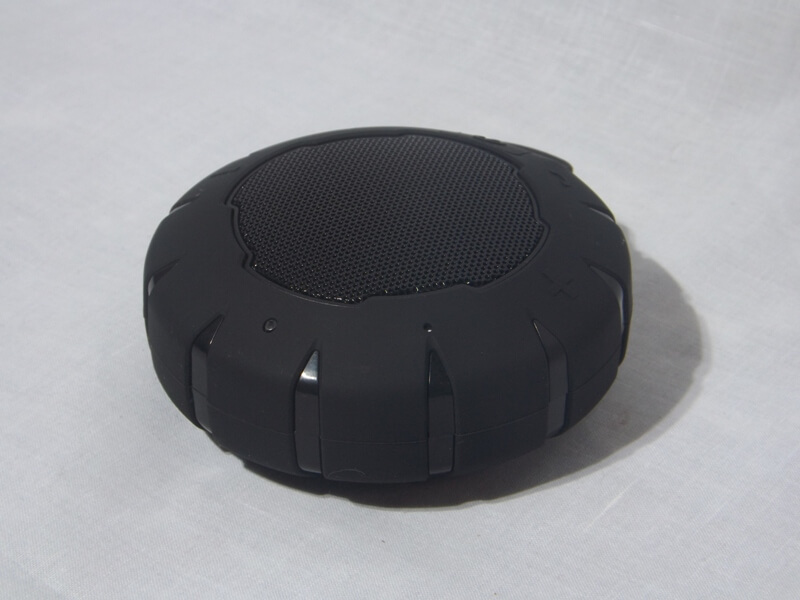 Considering the build quality, the speaker does feel sturdy and I don’t think it’ll break easily from minor falls from hands or places. The grills should have been impenetrable just so you won’t have to clear water from inside if it makes it way in. One thing I would’ve liked with the speaker is that it should’ve come with a vertical rubber or plastic stand as well. I mean, not every one likes to see a speaker laying flat. It would’ve added more attractiveness to the speaker seeing it standing between random stuff and producing sound.

The Nusound Acoustic Wave Rider NU-024 has an MSRP £39.99 or $62.40. The price tag is lower than the Cube-016 but both has somewhat same quality which means the price of Cube-016 could be lower. But again, the Wave Rider only has Bluetooth as a connectivity option which is of course a -ve point of the speaker. Nusound has I think once again claimed their statement of providing high quality speaker at affordable price true. But once again, to stir up the competition, the price could have been lower.

Concluding all, the Wave Rider proves to be a great companion for outdoors or when you don’t have electricity (which happens like 3 times a day for me) with great battery timing and sound quality. The bass could have been better and more options for connectivity could have been provided For the price of £39.99, you’re getting a high quality BT speaker, but the price could have been lower. I would like to rate Nusound Acoustic Wave Rider NU-024 4 out of 5 stars.

Disclaimer- Nusound sent me the Wave Rider Bluetooth Speaker to do a honest review on. All opinions are mine and mine alone.