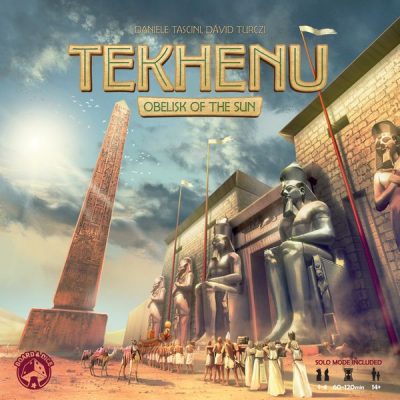 The game is set in ancient Egypt. In the game, there is an obelisk, and an area to trigger the action. These 6 areas represent the 6 Ancient Egyptian Gods. In their turn,  players will take the dice of any area to do the action of that God. Otherwise, they can use the dice to produce the corresponding resource.

Each area has 3 lands, Forbidden Land, Contaminated Land, and Pure Land. There are 5 different types of dice. Depending on the shade, or the sun, these dice belong to different lands. For example, a white dice is polluted in the shade, forbidden in the dark, and pure in the light. If the dice are in a restricted area, the player will not be able to use them. Picking a dice in the Contaminated land will bring up the polluted balance, and the pure land dice will bring it up on the healthy scale. The player must balance this balance to get the upper hand in order of play.

Once the player has drawn 2 dice (2 turns), the sun rotates 1 time. After having 4 dice (4 turns), players will check the balance of justice to see if it is polluted or clean. After 8 turns, players will calculate the score. Finally, after 16 turns, the game is over. 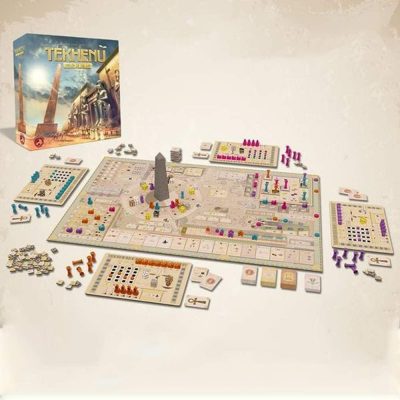 The good thing is that the game has a lot of different ways to score points. Based on the Decree card at the beginning of the game, the player will shape the strategy for the whole game. Throughout the 16 rounds of the game, players are required to change their approaches and solve problems continuously in order to get points.

The game requires players to know what the opponent needs, wants, and what they are about to do. Not to mention having to calculate which dice should and should not be used. Although there is no direct conflict, the game has a lot of indirect interaction between players. Players can easily sabotage others by taking the dice they desire. This will end up blocking them from doing certain actions. Also, they can compete for the certain spots or areas on the map as well.

Dice system of the game is great. I think this is the identity and highlight of the game. Not just using dice to trigger action, players must know the balance between contaminated dice and healthy dice. In addition, after every 2 rounds, the dice continuously change, creating a lot of climax in the game. 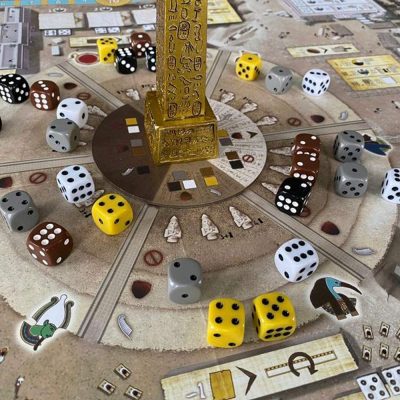 16 rounds of the game is a bit short compared to the actual gameplay. Before players could do anything, the game is over. Therefore, the game requires players to optimize all their turns. In other words, if you are looking for a light simple game, Tekhenu: Obelisk of the Sun is definitely not the right choice.

The rules of the game to explain are quite complicated, especially the dice drafting with the shade, the shadow and the sun. To be honest, the game has a lot of unnecessary elements. The Obelisk is beautiful but obscures the view of everything behind it. This 3d component is very nice, but affects the game play too. Similar to the castle, and the cathedral in Praga. Moreover, many of the rules are really unnecessarily complicated. For example, the temple area, where the actions of the 2 Gods are, is a bit cumbersome. Not only do players have to remember what each God’s action is, they also have to remember the interaction between each action. This can easily slow down the game. 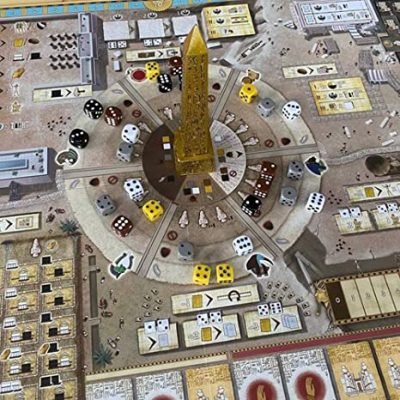