One of the most effective ways to fall asleep is counting sheep jumping over a fence. Today, I’ll bring you Sheepy Time from AEG publisher. In the game, players will be the Dream Sheep, the one that people often count to drift into the land of dreams. Each time the sheep jumps over the fence, the player will fall asleep more easily. But somewhere in that dark corner, there is still the ghost of Nightmare lurking, waiting to attack these Dream Sheeps…

In Sheepy Time, each player will have 1 wooden sheep, a Wink point token and a pillow token. The Wink point token will start at 0, while the pillow token will start at 40. The game consists of many laps. At the end of each race, the player will be deducted Pillow points based on the position of the Wink score. If the Wink is higher, the player will be deducted more. At the end of each lap, the Wink scores will revert to 0, while the distance between Pillow and Wink will be shorter. 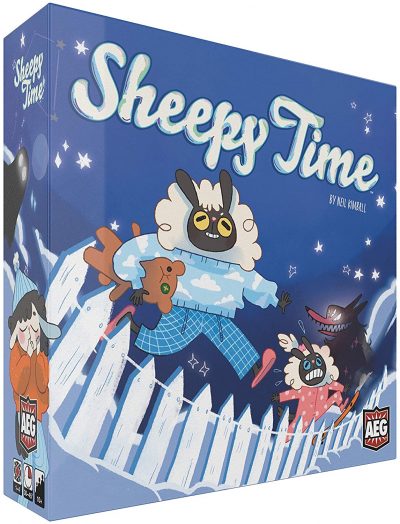 The game will start with a racing phase. During this phase, the player will do 4 steps in order: play 1 of the 2 cards in their hand, use the Dream Tile, jump over the fence, and draw a new card.

Using one of the two cards in the hand, the player can move his sheep to another area of ​​the circle. If the sheep is on the tile attached to a Dream Tile and the player has the Zzz Token on it, then players will activate the Dream Tile functions. If the sheep jumps over the fence, player gets 5 Wink points. Players have the right to stop the race if they want. In the final step, the player will draw cards to have 2 cards in his hand. If it is a Nightmare card, the player must resolve the effect. Then they will draw another card. They will keep doing this until the newly drawn card is no longer a nightmare card.

When the player encounters Nightmare for the first time, the sheep will be panic. It will be lying flat. If the sheep has a nightmare again, it will be eliminated from this lap race. If the nightmare jumps over the fence, the lap ends. All sheep in the race will wake up and only get 3 Pillow Points.

The goal is to deduct as many pillow points as possible. Whoever has a Wink token that surpasses his pillow token, that player wins. Otherwise, when all sheep finish the lap, whoever has more Wink points will have a certain amount of points deducted from the pillow.

Then, each player can do 1 of 2 actions: place 1 more Dream Tile or place 2 Zzz tokens on the Dream Tile. 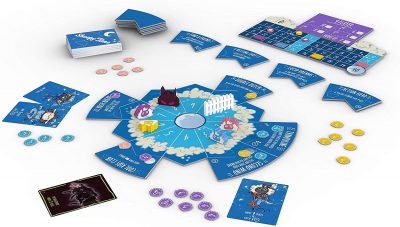 – The game’s racing point system is very creative and impressive. Instead of racing a certain number of points, players will have to race on an ever-changing scale. The later, the shorter the track.
– The rules are easy to understand, and the playing time is very short. 4 players costs about 45-50 minutes for a game.
– Players will constantly strain into the stacking stages to draw less cards but have to draw. At that time, the probability of activating Nightmare was very high. Another way to test your dignity without rolling the dice.
– The Dream Tiles are very diverse in features. Each crime 1 game can only have a maximum of 10 tiles.
– Z token staking system is very interesting. Players do not simply stake Z tokens to trigger Tile actions. Instead, the player is only activated when the sheep lands on that tile. This is like a kind of delay effect.

– Although the Wood Tokens are adorable and cute, the quality of some game components is a bit poor. The Dream Tiles have different, and uneven patches of blue. In addition, the quality of the cards is also very thin.

– The game has a lot of words. The words on the cards are similar, so it’s not too difficult. But on the dream tiles, the player must read these words and remember them continuously. With a family game, many words like this are difficult for players to focus on.

– The graphics and the name of the game are easy for players to ignore. Whenever I bring a new capacitor, the first sentence is always “huh? Children’s toys, right?” At the FLGS store near me, there are many similar cases. 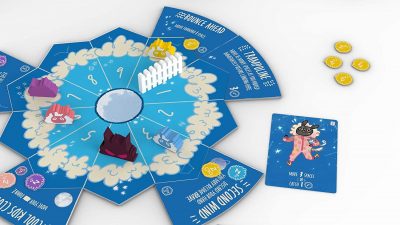 Sheepy Time is a game that will give players the feeling of comfort and relaxation. The game doesn’t put too much emphasis on thinking, or optimizing the engine. Instead it is all about move, jump over the fence as well as get as many points as possible. The game is a bit long to make a filler game. However, this will be a great game for family game nights, especially when your family has young members and doesn’t want to think too much.

You can buy Sheep Time at this link