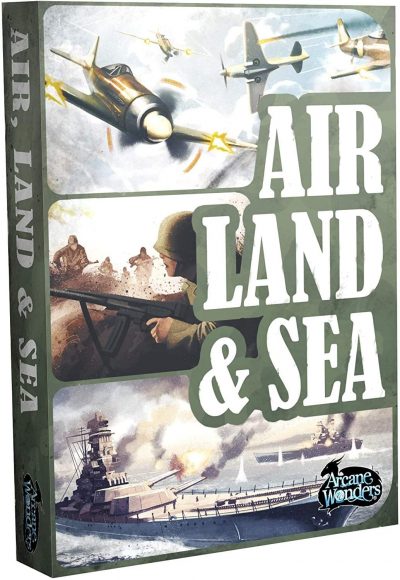 This is a two-player game. In the game, each person will be a leader of a faction to control 3 Theaters of War: land, sky and sea. Each region will have a unique card that can only be played in that area. In addition, there are some cards that will help players play cards in other areas. An example of this is a card letting player deploying tanks in a Sea area.

The player who reaches 12 points first will be the winner. The game will include many mini battles. When you win 1 match, you will receive 6 victory points immediately. Players can withdraw strategically to prep for a new round when they have bad cards on hand. If this is the case, the opponent will only get 2-6 points depending on how many cards have been played in that battle. Otherwise, the scorings will be based on the number of cards played. Whoever controls more areas on the map wins that match and gets 6 points. (Win zones by trying to get more high-scoring units or effects that make your zone score higher than your opponent’s). 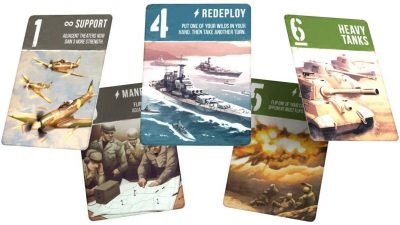 Shuffle the stack of draw cards for each person 6 cards.
2 character cards, one goes first, one goes back, randomly divided between two players.
The playing area between two people will be set in random order. It can be land, sea and air; or air,  land and sea, or just depending on the player. 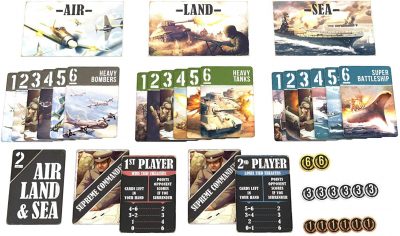 Players in turn will have 2 main actions

1. Play cards face up or face down in the correct playing area. Example: Tank hits the Land. If the card is played face down, players can play it in any area.. However the score will be low.

2. Declare surrender or not. Then the turn ends.

Face-up cards will have many effects that are grouped into 2 groups: instant or permanent. (For example, the relief plane has an effect that can only be used once, so the next turn up card can hit any area)

Tactics are simple, diverse, easy to grasp and deploy. A deck of only 18 cards has up to 16 effect cards. This creates a lot of tactics when playing and makes the game enjoyable. It also creates some surprises in bluffing the opponent with small points cards.

The rules are easy to grasp. It will take roughly 10 minutes to learn how to play the game. Setting up the card is also simple, fast and suitable for small tables. The game is also newbie friendly.

In fact, the number of cards is quite small. For experienced players, they will grasp the opponent’s strategy very quickly after a few cards are played.

With such a small number of tokens, the box has a lot of air in it. I expect more components in the box though.

Lastly, This is a war theme game, not wargame

Good game, strategy, fast, suitable for newbies. Players don’t have to spend tons of time for one session of a game. It can be at any time during the day.  Also, the game comes at very affordable price.  You can try Air, Land & Sea at this link